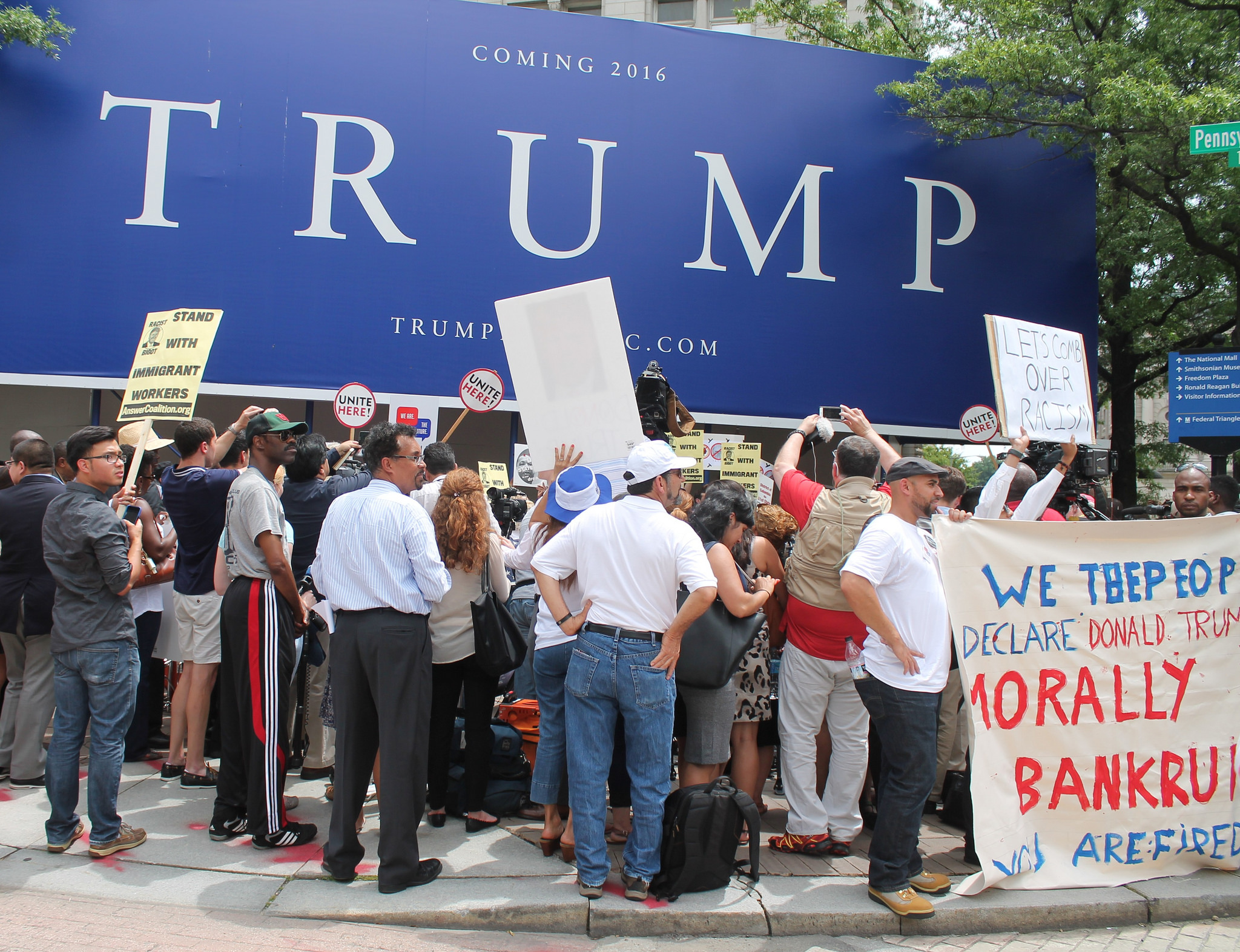 People across the country are reeling from and grappling with the new and unfolding realities that accompany a Trump presidency, one that is undergirded by a resurgence of right wing populism and overt white nationalism.

In Seattle, many of our social justice organizations are experiencing a groundswell of interest from newly politicized people who want to avoid passivity in the face of the election of an overtly racist and xenophobic demagogue. Although the impetus for the shifting political landscape is horrifying, these are exciting times: youth are taking to the streets en masse to denounce Trump’s platform of hate and entire school districts, cities, and states are being declared as hate free zones or places of sanctuary for refugees, undocumented people, and other minoritized groups.  In my own experiences with this frenzied surge in political discontent, a white anti-racist group I organize with in Seattle (CARW) hosted a meeting that was attended by over 800 white people interested in organizing for racial justice.  Unsurprisingly, the most common question we got and are still getting is, “What do we do?”

This question is incredibly important and is one we need to grapple with, act on, and strategize around til we go to our graves because the forces of white supremacy and other systems of oppression will not go quietly into the night.  Now is the time to build those rapid response networks that prevent undocumented people from being detained and deported; now is the time to develop serious resistance to raids and registries and the expansion of extractive industries that contribute to climate change, environmental racism, and the undermining of indigenous sovereignty; now is the time to demand investments in people and communities not prisons and cops.  It has been time to act for humanity and against white supremacy since the founding of this country and it is still that time.

As a white person, I’m sitting with a renewed and deepened understanding that the we of white America haven’t been doing enough to counter the strong currents and foundations of white supremacy in this country.  This is a “we” that crosses the political spectrum.  We are found in areas that are blue, red, liberal, conservative, rural, urban, rich, poor and everywhere in between.  As left-leaning white folks, I think it is too easy to proclaim our otherness from the 58% of white America that voted for Trump.  I think we need to resist this urge.

It’s too easy to separate ourselves from our so-called more racist counterparts by calling out someone else’s white fragility (which is REAL) when we ourselves often lack the skill of staying connected with people on the other side of such critiques.  I know this because I’ve been the person who has deployed finger wagging and motivational shame to point out wrongdoings of other white people as if those were the most powerful invitations in the work of collective liberation. It’s humbling to consider how this anti-racist and often elitest ego trap that so many of us fall into is part of the broader mileau that created and enabled Donald Trump.  We need different invitations, invitations where we set aside this white dominant culture of the left where we eat each other alive and push our own buttons of self-destruction.

It’s difficult in times of urgency and legitimate fear to pause and reflect and find the grounded center from which we want to organize.  However, if we are to build a sustained, leaderful, and grounded mass resistance, we must not only seek to answer the question “what do we do” but also “how do we do what we do.”

For some time now, I’ve wondered about the ways in which elitism and righteousness in movement spaces, particularly white anti-racist spaces, are contributing to the (re)generation of white dominance.  In Seattle, I’ve witnessed again and again invitations by white people to other white people into racial justice work through condemnations, guilt trips, shame spirals and call outs.  I’ve also witnessed a lot of white people walking away and cowering and deciding that “this activist thing must not be for me.”

The thing is, it’s not that an analysis about white fragility in such cases is wrong or that a call out is never appropriate.  It’s just that if we believe that we’re responsible for organizing white communities and bringing masses of people into this work so we have multi-racial movements that are equipped to build and shift power, I’m not sure we’re going to do that most effectively if the shape we’re inviting white people to inhabit is one of shame, guilt, and competition with each other about which of us are the best white anti-racist activists.  Put another way, for me, my work is now increasingly informed by identifying what works, assessing who we’re making more work for, remembering how we’ve personally come to be where we are in the work, and organizing to sustain and grow our movements.

I don’t think there’s one right way to move white people toward the work of racial justice.  And, I do think there are better and more effective ways.  In particular, I think it’s useful to approach racial justice work from a human development angle — and recognize that white folks tend to go through a developmental process ranging from obliviousness that racism exists to defensiveness to retreating into white culture to distancing ourselves from whiteness… the list goes on.  I think in white anti-racism worlds we tend to get collectively sandwiched and stuck between defensiveness & distancing practices, which I see as two sides of the same coin.  I think we would do well to cultivate an ethic of connection, curiosity, and humility as we work with each other to divest from the legacies of whiteness that we’re inheriting regardless of our good intentions.  I think in leading with love, connection, curiosity, & humility, we create more powerful and lasting invitations into this work and get people to stick around.

Something I’ve become more and more aware of is that in lashing out against white folks that don’t “get it” — I’m missing an opportunity to move someone while simultaneously increasing the chances that that person will not be any closer to embodying anti-racist practices than before.  Of course, because of the way racism works, people of color and communities of color will continue to bear the brunt of this reality that I’ve actively participated in recreating.  To challenge what I often refer to as my mental & verbal assassin (that nasty judgy version of myself that likes to sit up on a high horse and judge other white people for doing it “wrong”), I’m still working on developing the skills of deep listening, maintaining curiosity and pulling out the seed of goodness in what a person is saying even when I have fundamental disagreements with them. This is hard work and demands an incredible degree of mindfulness, poise, and patience! And it’s a skill set that I think we need to cultivate as white people to do the work of melting the intense political wedges that exist within white America while also showing up to act powerfully in support of people of color-led movements.

A phrase I like to say is that none of us came out of the womb knowing how to organize for racial justice.  Just as interpersonal racism is learned, so are behaviors that actively work against the perpetuation of systems of oppression.  One of the practices that helps me find more humility in my work with other white folks is to think back to earlier incarnations of myself and ask if I would have had the patience to sit with me at that time.  The cool part about this practice is that in seeking to have patience and compassion for my past self, I’m often reminded of the deep gratitude I have for the people who did stick with me and sit with me and slog with me through some of the rougher parts of my journey.  I’m reminded that it’s often been people of color who don’t owe me a damn thing who have really stuck with me through this learning process.  I remind myself that I have an opportunity to share the gifts and lessons they gave me with others by modeling patience and finding the right balance between being gentle and critical.

Organizing to sustain and grow our movements

As I think about what we’re up against with the Trump administration, and how that’s being layered on top of centuries of racialized harm and violence, I know that the fights we’re up against are big and painfully monumental for the future of our earth. I know that the harm that is to come will not be experienced equally and that we have a duty to fight like hell for collective liberation and that we need to start yesterday.  In the midst of this urgency, though, I think we must evaluate the ways in which our organizing cultures undermine the development of a spacious and leaderful mass movement.  We must attend to the ways we are responsible for furthering political wedges that led to the rise of a white nationalist strongman like Donald Trump.  We must grapple with the ways our own spiritual voids and often limited examples of love as practice show up in our organizing spaces.

We need each other and while we can’t afford to pretend that differences don’t exist and shape where we organize from and how we take leadership within movement spaces, I also think we can’t afford to be our own hair-splitting enemies.

I want us to consider how we bring newly politicized and not-yet-in-motion people into the work — and how we do so with a commitment to building our skills at connection as much as our skill at critique.  I want to know how we build many on-ramps and entry points into movement work.  I want us to burn down cookie cutter approaches to activism where we expect everyone to look and talk and act the same. I want to create worlds with you where assertions like Black Lives Matter need not be uttered because they are self-evident and collectively agreed upon as non-negotiable.

I want my white niece and nephews to grow up knowing their own liberation and well being depends on their doubling down and committing to uprooting racism and all interlocking systems of oppression. I want us to be imperfect, and learning, and bold, and unwavering in our commitments to keep coming back to create a better world. Because whether you’ve been doing this work for decades or just came to your first meeting yesterday, it is up to us to build a fierce, liberatory white anti-racist practice in the times of Trump.

One thought on “Toward a Fierce, Liberatory White Anti-Racist Practice in the Times of Trump”