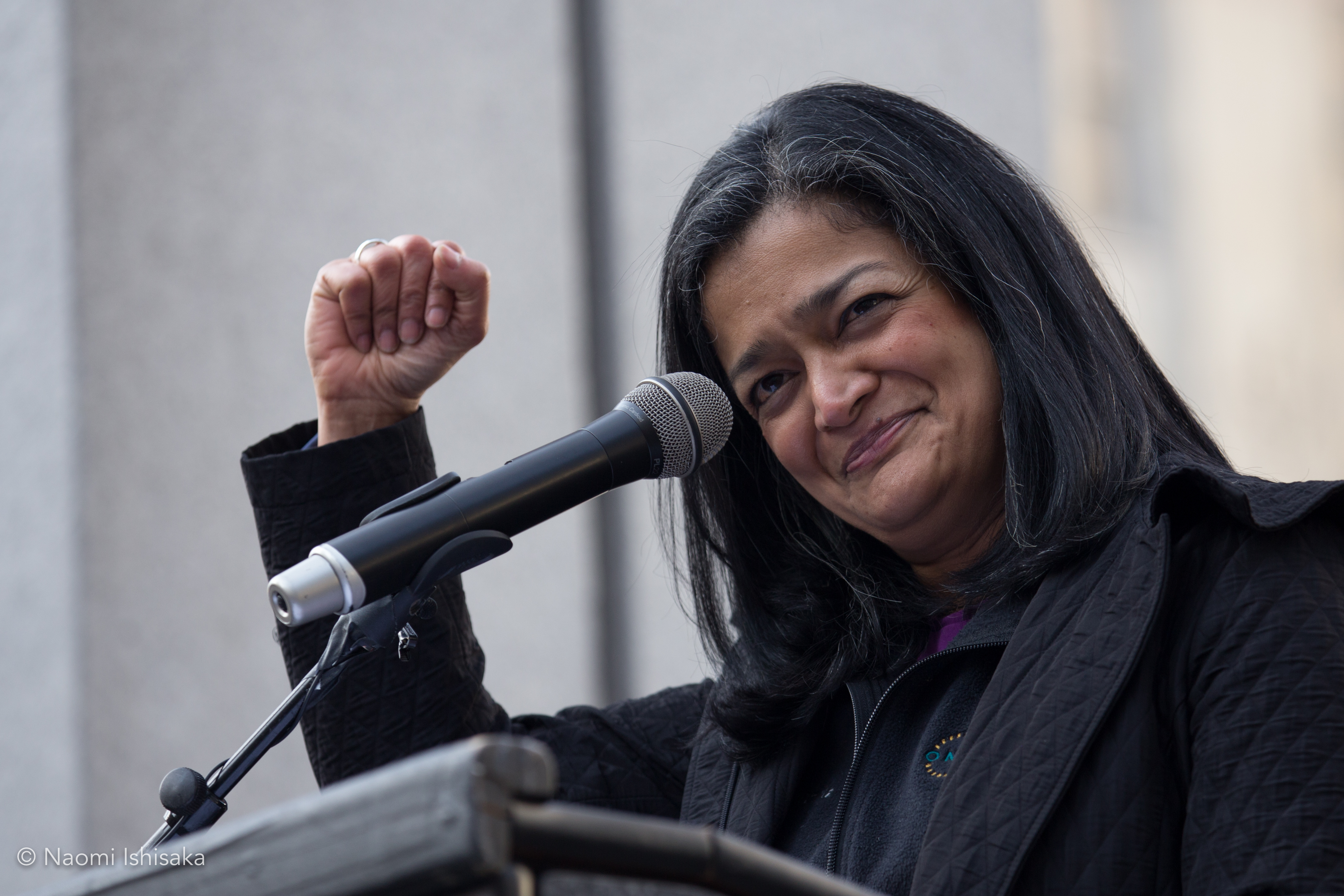 This comes after a Friday vote by congressional Republicans that laid the groundwork for repeal of the ACA- which would put the health insurance of 20 million Americans in jeopardy.

The event was a part of a national day of action organizing in defense of the Affordable Care Act after several progressive legislators; particularly, Senator and former Presidential Candidate- Bernie Sanders and in Washington State, Congresswoman Pramila Jayapal called for ACA supporters to mobilize. 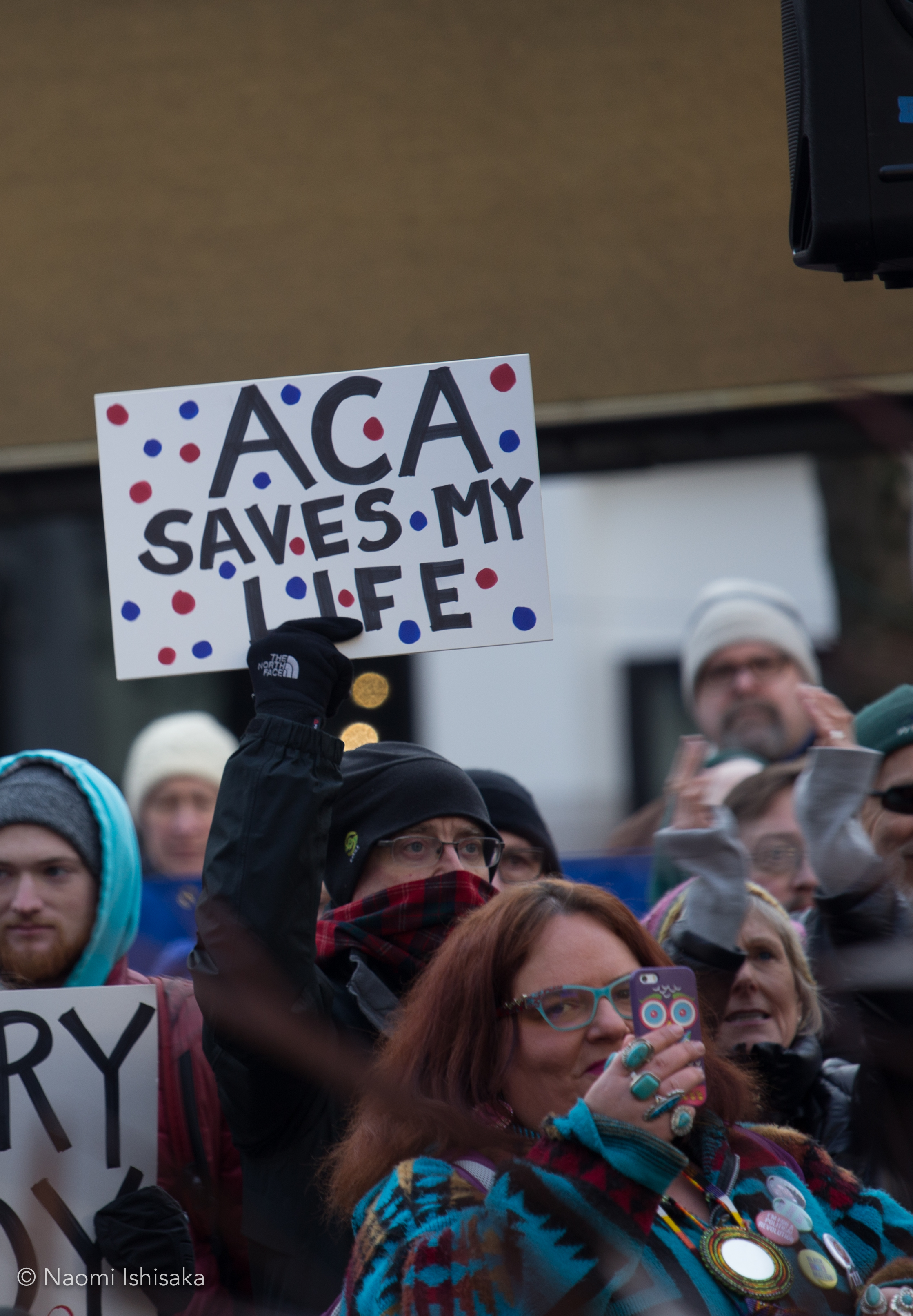 “Everybody who’s here, the thousands that are here are a part of it, the people around  the country are a part of really calling out what they’re doing and that [the Republicans] do not have a plan to replace [the ACA]” said Rep. Jayapal.

The congresswoman, who is a South Seattle resident, also emphasized the danger of normalizing the incoming Trump administration and how people can fight back, using the foiled attempt to attack the Congressional Ethics Office as an example.

When I asked Rep. Jayapal what’s at stake should the ACA be repealed, she laid out a rather bleak picture of what could come.

“Three quarters of a million Washingtonians could lose their healthcare, there are 50,000 people who have benefited through Medicaid expansion who will lose that, we have tens of thousands of people who will get kicked off their parents’ [insurance]. Businesses, rural hospitals, there are a lot of folks who will see chaos in the system and many will face life-or-death decisions,” she said. 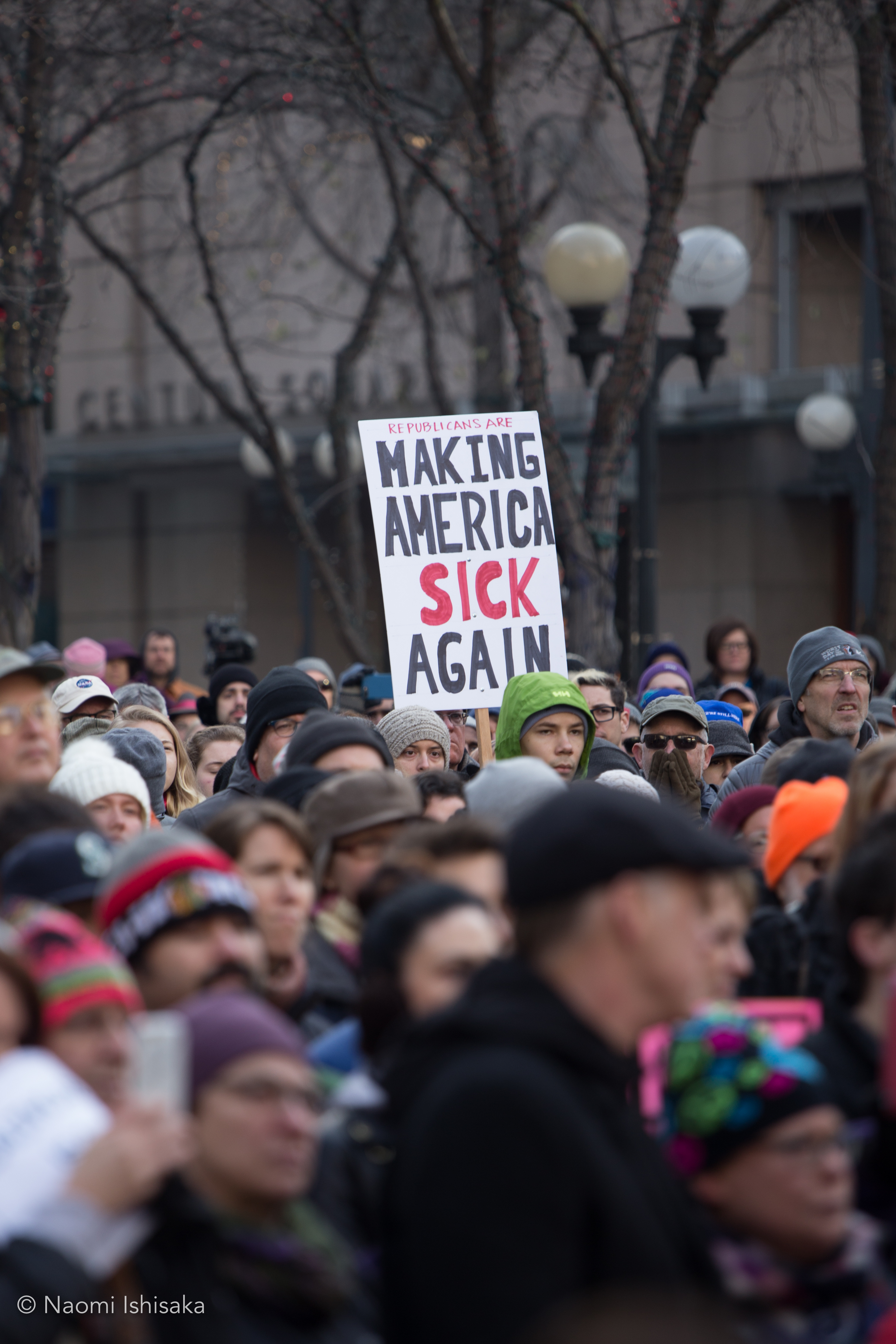 A member of the Washington Community Action Network, Roi- Morton Brown, is an example of someone who would’ve been severely crippled if not for the ACA. According to Brown, who was assaulted while intervening in the robbery of a neighbor.

“I had numerous challenges due my recovery, due to the trauma to my head, I had numerous vision and balance issues…two cracked ribs, a cracked skull and an injury to my left eye socket were some of my other injuries. I was unable to see a doctor while I tried to heal from some of these injuries because I didn’t have insurance. I had to figure out how to rehab and heal myself. I now have Apple Health because of the ACA,” said Brown.

She also asserted that the ACA was an act of racial justice. According to a study from the nonpartisan Urban Institute from 2014 after the full implementation of the healthcare mandate, the uninsurance rate among communities of color decreased significantly.

Another speaker, Makini Howell, owner of Plum Bistro and a leader from the Main Street Alliance said that the ACA  is not just an issue of racial justice, but gender justice as well. The disparity she’s referring to was highlighted by the National Partnership for Women and Families in a recent statement whereas, “[before the ACA] nine in 10 of the best-selling plans on the individual market practiced gender rating, which cost women approximately $1 billion per year”.

Howell also commented on the potential hardship small businesses could face if the tax credits the ACA currently provides them were taken away.

It was clear on Sunday that anxiety ran high over the diverse crowd of more than two thousand people from across the region who had come in a desperate search for action.

After speaking on-stage where he called on everyone in the crowed to “be an organizer, “ SEIU 775 president David Rolf  said  people must carry that message beyond Seattle.

“Montana is a great example of a bright red state but, where 75,000 Montanans gained coverage for the first time as a result of the ACA and the public health infrastructure is largely dependent on Medicaid…if you think about a state like that which voted by wide margins for Romney and then for Trump, …We [must] find the people we know, people in our networks and the organizations we belong to in order to bring the message of support for the ACA to red and swing states.” 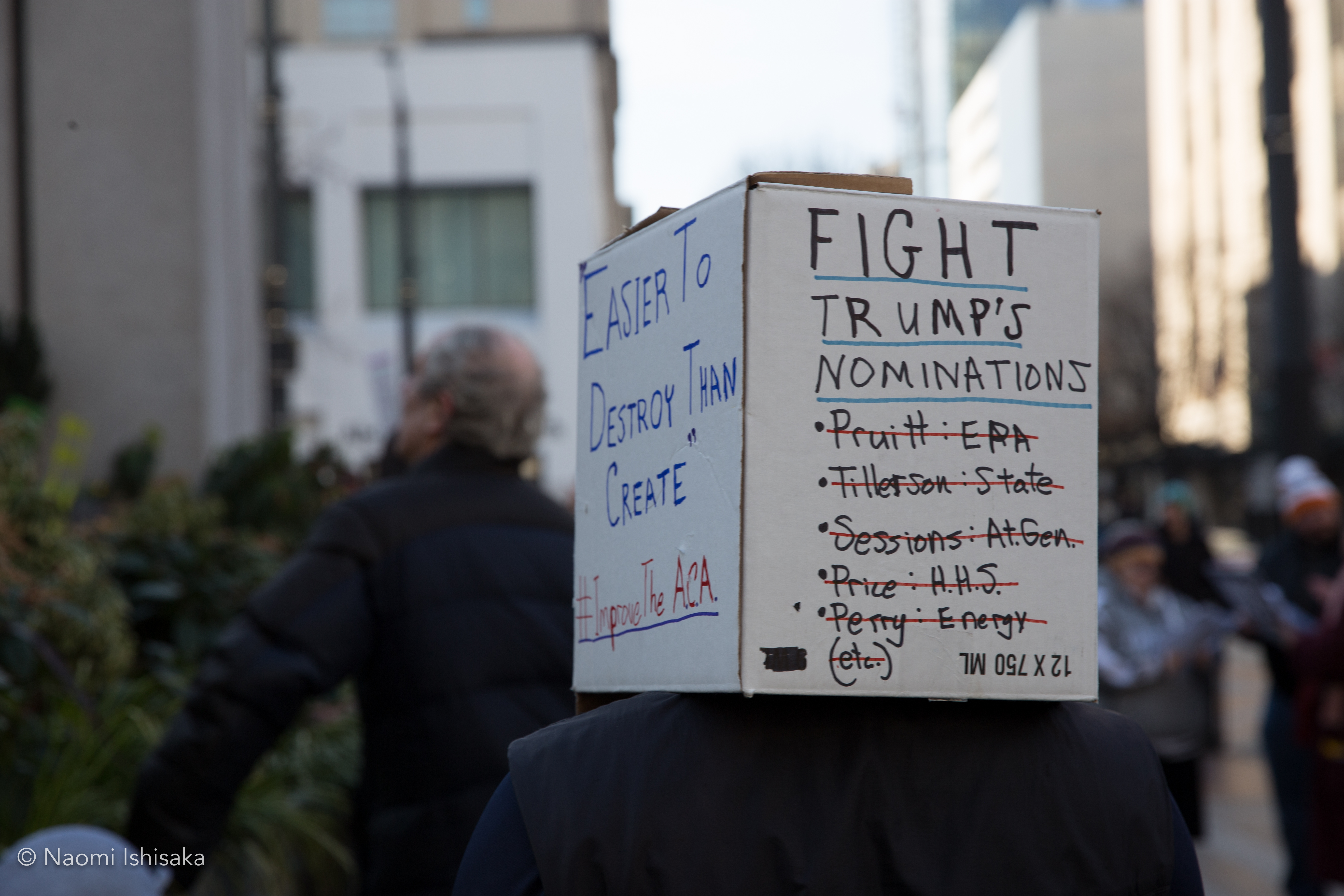 Representative Jayapal  took the stage shortly thereafter to an eruption of applause by the crowd. In her remarks, Jayapal outlined three components of how she wanted to “write the narrative on why we need healthcare to make this country really great.”

During her 15 minute speech, she offered a “prescription” to resist the repeal push underway by the Republicans in Congress she said, “we must be truth dwelling, storytelling, and specific and compelling.”

Jayapal further prescribed using the “overwhelming evidence” of the ACA’s positive impact through facts, personal experiences, and a specific and concrete demand to maintain the present system and improve upon it.

The former 37th District State Senator then urged attendees to send personal stories of how the ACA had improved their lives to her congressional office.

Jayapal stated that she plans to read the accounts of the ACA’s impact on the floor of the House of Representatives.

After the rally, I spoke with  King County’s State Committeewoman, Jessa Lewis whose parents live in the 5th Congressional District (Spokane and Pullman).

“I’m going to hold my parents hands, my step-dad…if the ACA is repealed, he will die. He literally cannot afford his medication and when things get close, even with the ACA he cuts pills because he cannot afford what he’s prescribed.”

Additionally, Lewis mentioned that the group, Our Revolution and other Democrats, intends to hold elected Democrats, such as Washington State Senators Patty Murray and Maria Cantwell, who voted against lowering costs on prescription drugs accountable for their actions.

Those interested in sending personal stories relating to the ACA can contact Congresswoman Jayapal’s office at this link.