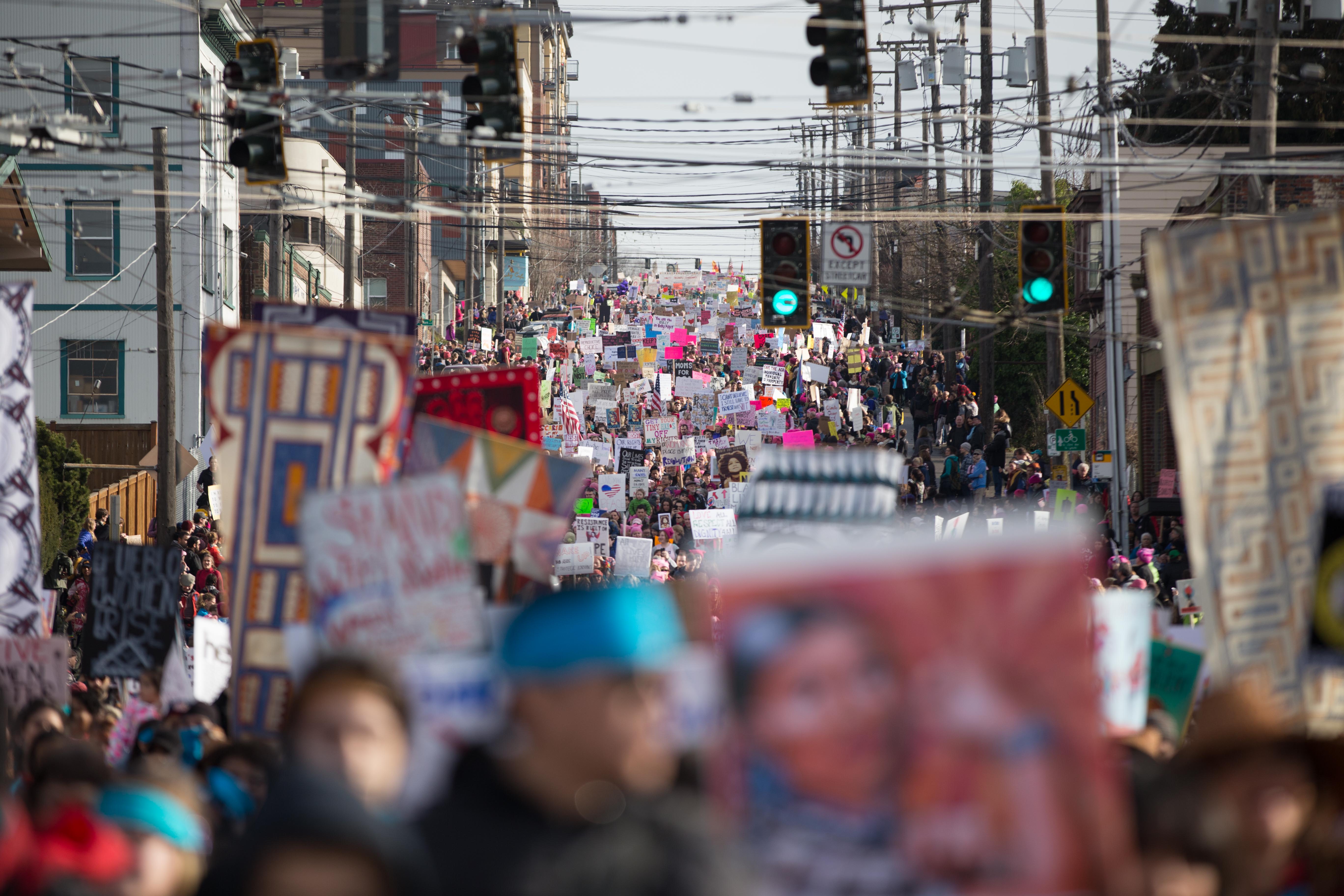 Women, men, transgender, gender-diverse people, and intersex allies marched together in droves Saturday for the Womxn’s March in Seattle.

Seattle’s march was held in solidarity with The Women’s March on Washington (D.C.), which advocated for “women’s rights as human rights” including issues concerning reproductive health, equal pay, and the LGBTQIA+ community.

The Associated Press estimated Saturday’s march in the nation’s capital attracted more than 500,000 people. For some historical context, the initial Women’s March on Washington, first held in 1913 by women suffragists, had a turnout of 8,000. Indicative of attitude in the early 1900s, marchers faced greater risks. With limited legal protections, many were injured as police callously stood aside.

Fast forward 100 years and some change, and yesterday’s march alone contained more than an estimated 130,000 people. At marches across the entire nation – which saw immense turnouts in New York City and Boston – attendance totaled more than 2 million people. It’s estimated that one in every 100 Americans marched.

Alanna Cotton, 25, participated in Seattle’s march despite being 31 weeks pregnant. She admitted she didn’t feel so great waking up that morning.

“I didn’t want Planned Parenthood to be defunded,” Cotton said, explaining her decision to march. “I’m having a girl as well. I want her to understand she can make a difference being one person in a big crowd.” 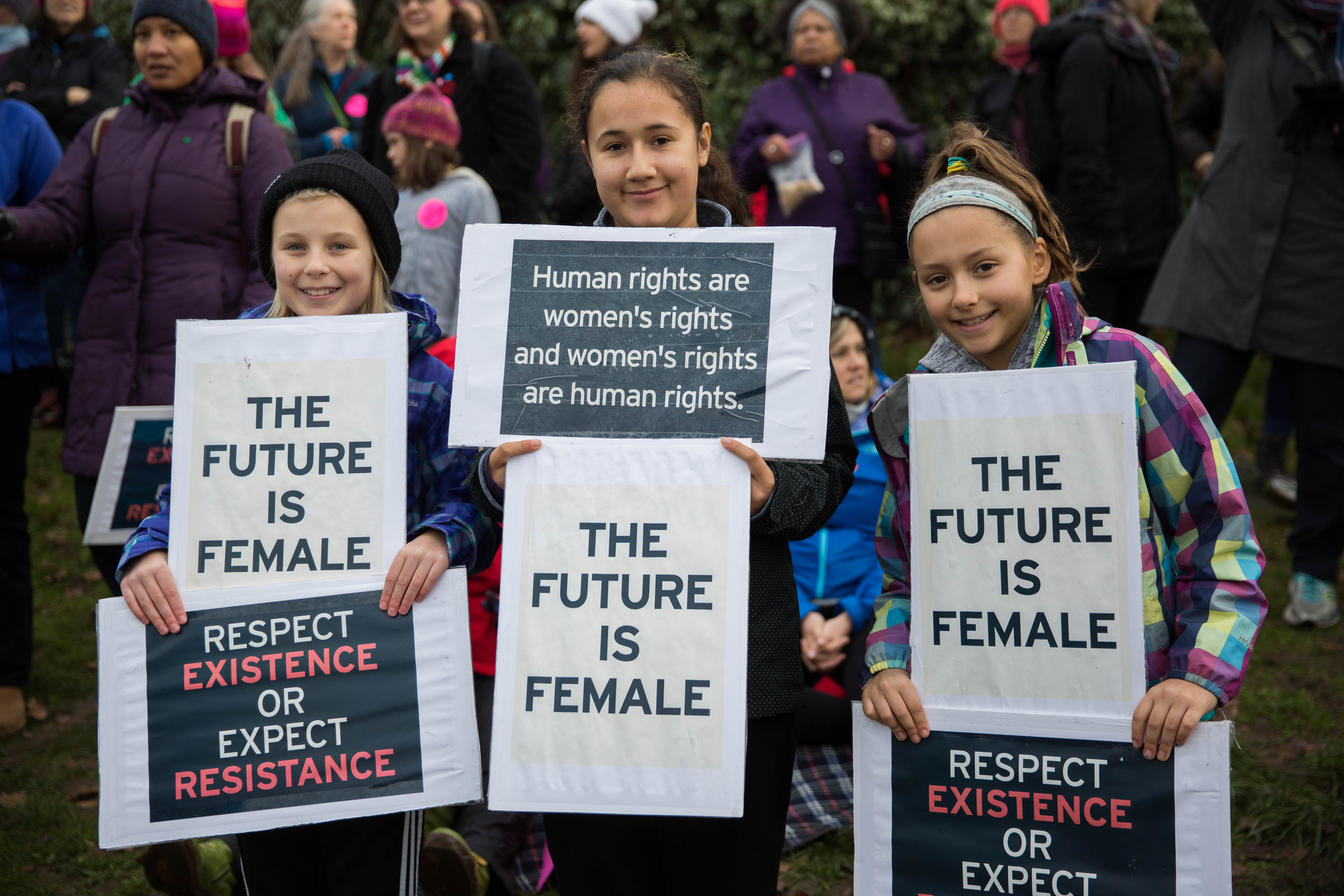 Cotton marched alongside her eight-year-old niece and another family member. She said it was empowering to march beside other women in her family, but her main concern was the risk a Trump Administration poses to women’s reproductive health rights.

“At the end of the day, it’s [a woman’s] right to have access [to birth control],” Cotton said. “I don’t think it’s fair that just because you’re in power, you can tell women what to do with their body.”

Currently, 42 states permit institutions to refuse to perform an abortion, with 16 states limiting refusal to private or religious institutions.

“I’m primarily wanting to be a part of a protest for women as a woman, but also as a woman of color to provide some intersectionality,” said Raya Leary, 24, who marched in overalls and tortoise-shell framed glasses. 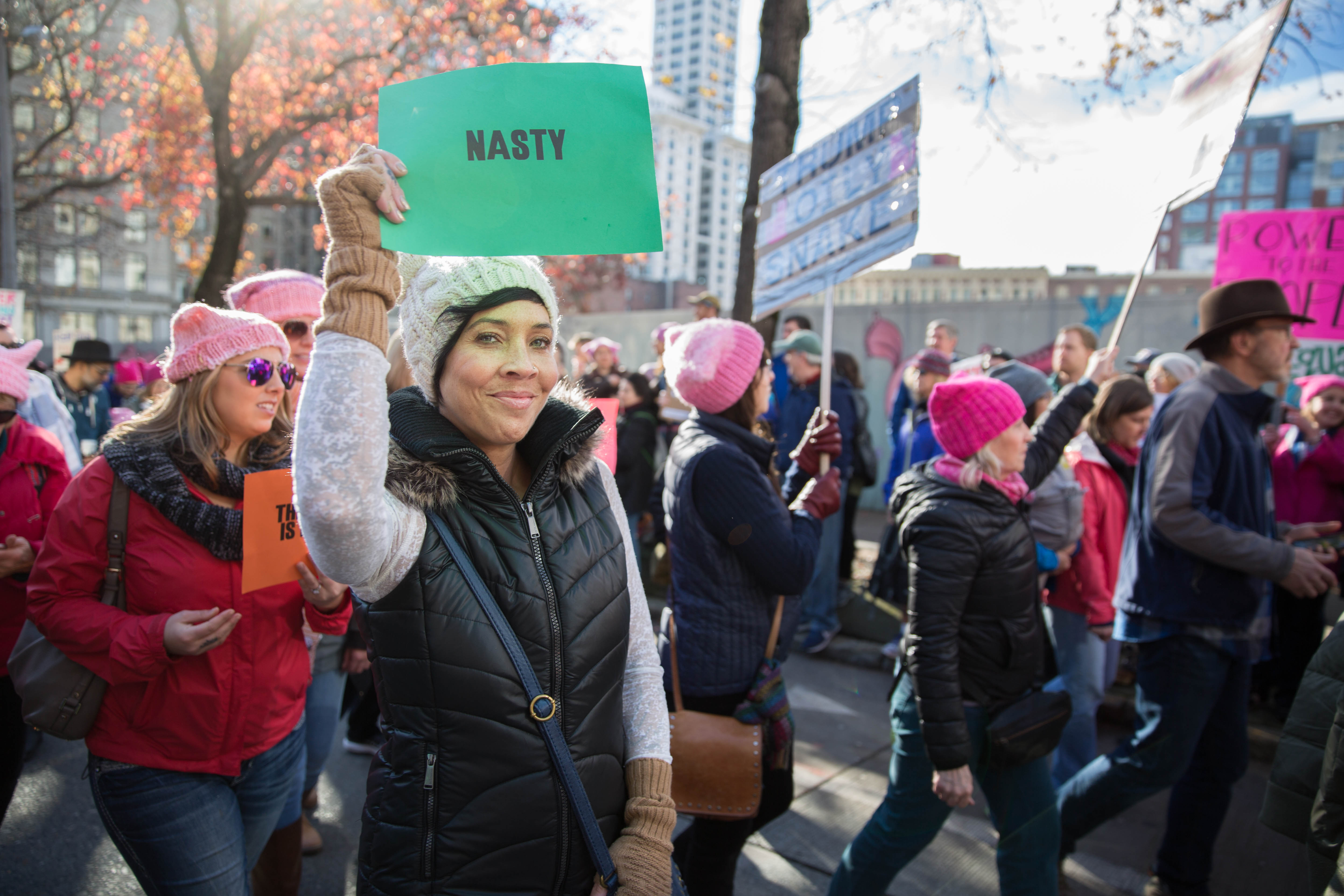 As she marched and the sun backlit her hair, she expressed gratitude for so many womxn being present on the day.

“I know there’s the talk of the bubble [in Seattle],” Leary said, “but I am grateful to be with a group of people who didn’t vote for a president who’s racist.”

Indeed, 87 percent of Seattle voters cast a vote for Hillary Clinton during the presidential election.

Around noon, marchers were momentarily awed by the sight of a bald eagle flying overhead as they made their way through the International District. Taking it as a good American-certified omen, many cheered in excitement. Two eagles ended up circling the march when it reached downtown Seattle.

“I was just like, even the animals know that Trump isn’t right,” Leary said, “for any place, really.”

Another marcher named Mano, a self-identified Black male immigrant who did not want his last name disclosed, participated in the march in response to Donald Trump’s election as president and said he was surprised by the turnout.

“I was feeling the need to be in solidarity,” Mano explained, adding that throughout the march, he kept thinking about his agency, and what it means to be an ally to womxn.

He defined allyship as: “Putting yourself in uncomfortable situations and also doing a lot of listening. Obviously to change social and structural inequalities.” 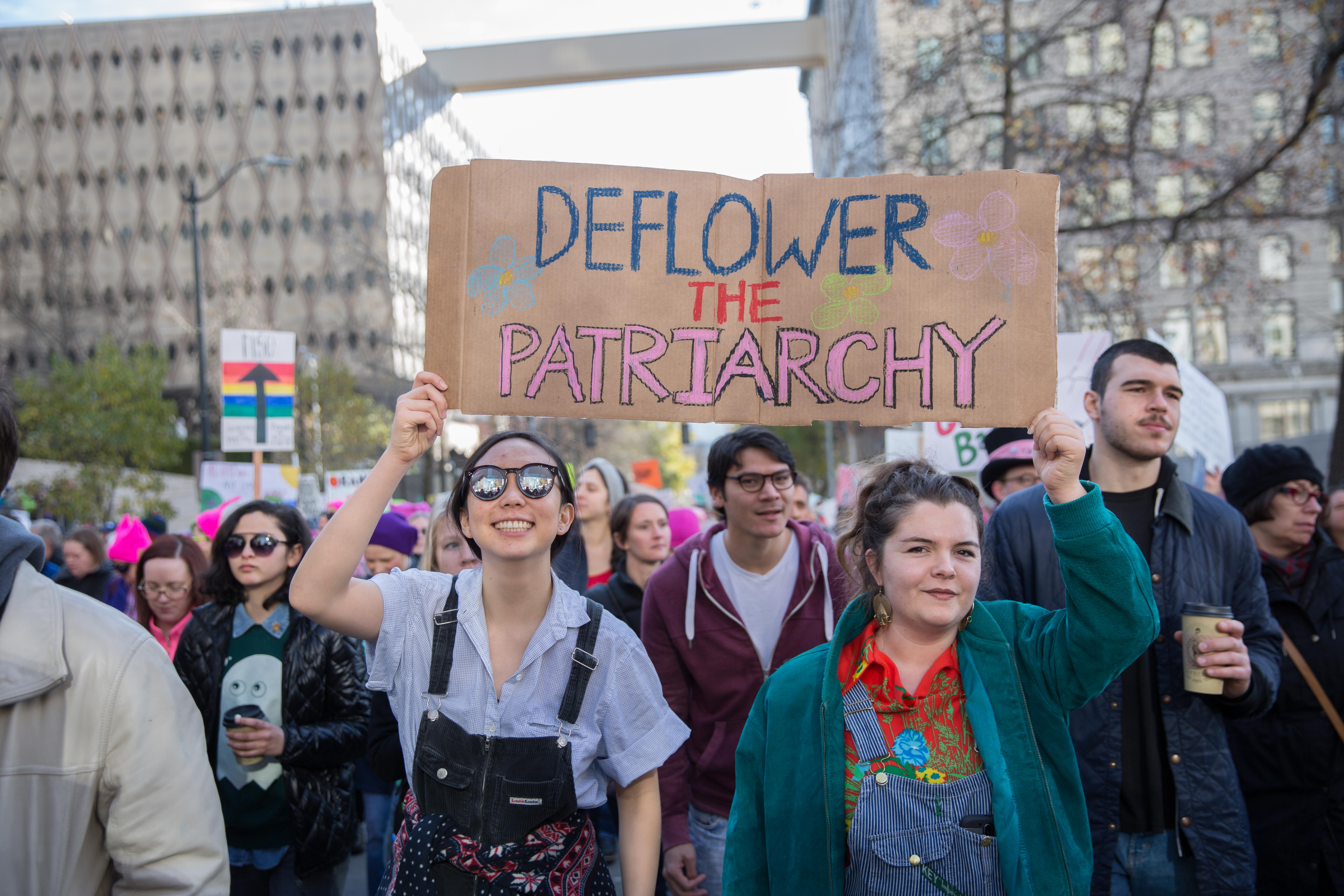 Further down the line of marchers was Diane Osland, a 66-year-old. This march wasn’t her first rodeo.

“It’s powerful, but I’ve never been to a women’s march that didn’t feel powerful,” Osland asserted.

For her, the march was her first time participating in march where she was able to get real-time updates on her phone from friends and family concurrently marching across the country.

Osland’s family members who also marched on Saturday included a sister in Anchorage, Alaska; a relative in Bellingham, Wash.; and another in Copenhagen, Denmark’s capitol – one of several women’s marches outside of the United States.

She said she was appalled that America has a president who is “basically despicable” and “totally unqualified.” Nonetheless, she insisted her fellow citizens should not simply sit idly by. 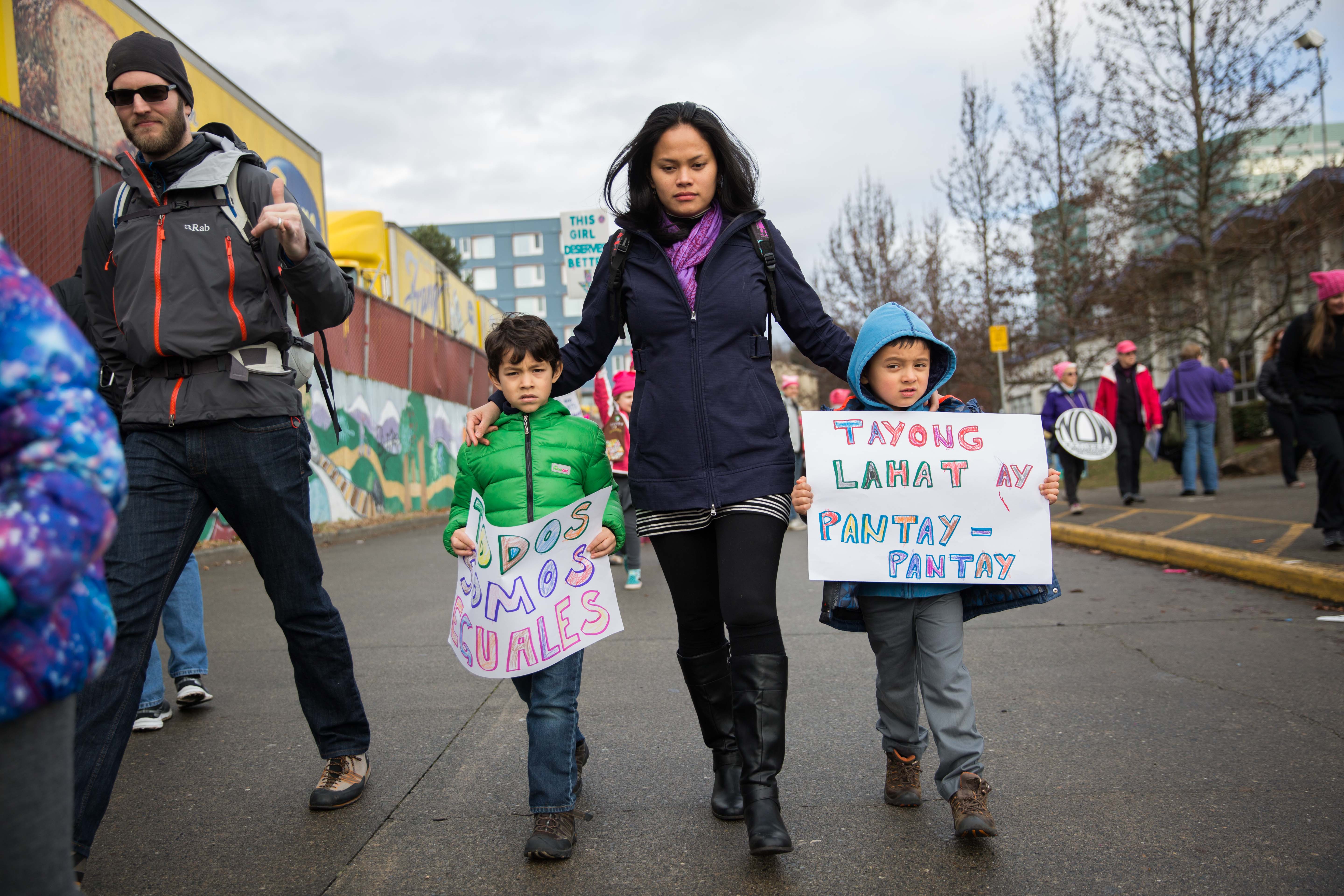 “We can’t be silenced,” Oswald stated. “We won’t ever quit resisting. It’s heartbreaking and it’s infuriating.”

Also spotted in the crowd was Seattle Mayor Ed Murray, wearing one of the infamous pink crochet pussy hats designated for the movement, while walking alongside his husband.

“It’s really moving,” Murray said of the march. “It’s such a different message to the country from what we heard on the capitol steps yesterday.” 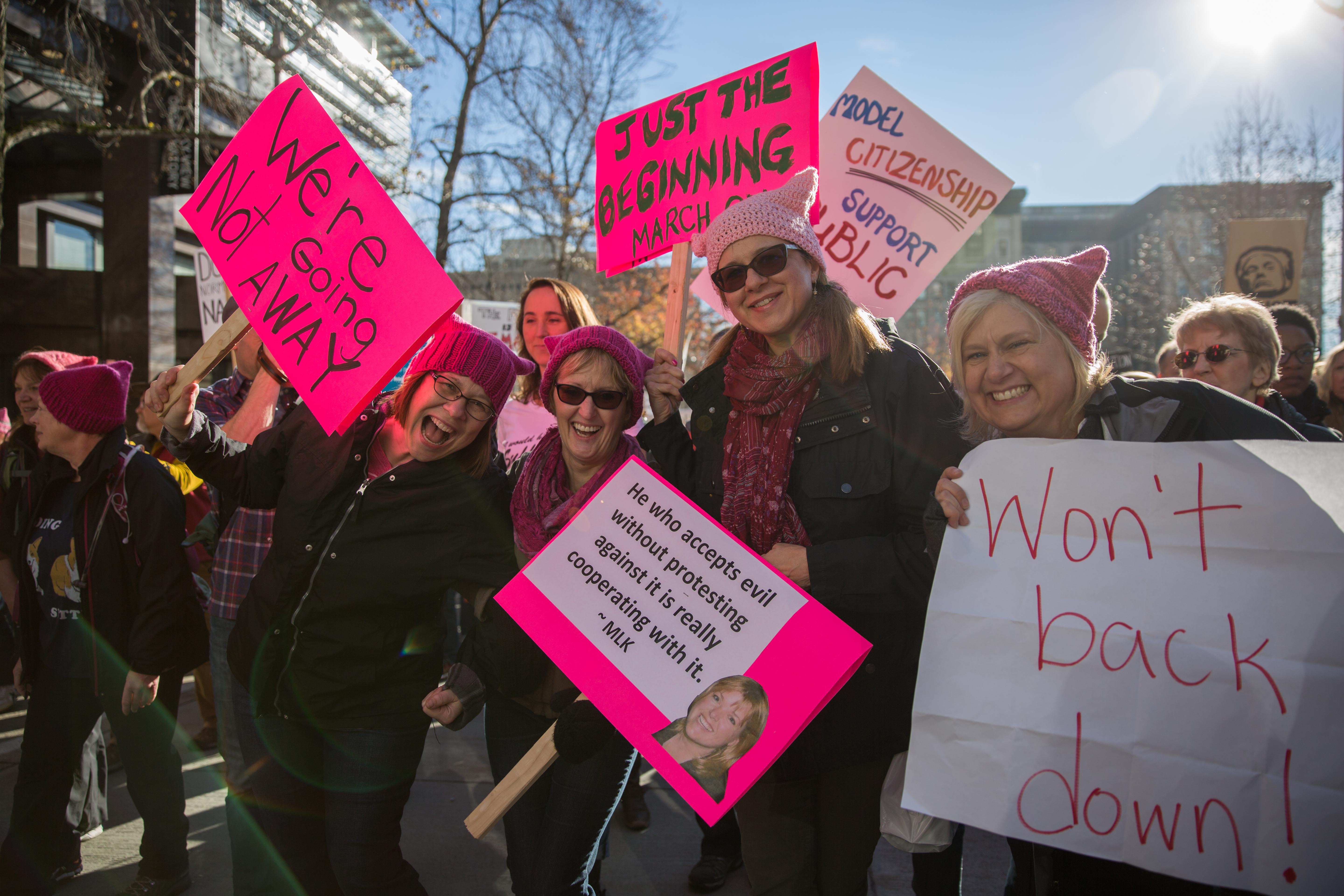 Murray said the march was forcing people to come out of their shells, a term locals call The Seattle Freeze, the observed trait of Seattleites frequently passing one another in public spaces without a greeting.

He called the shooting that took place at the University of Washington the previous night “very concerning.”

“That wasn’t a hopeful sign. Today’s a hopeful sign,” Murray contended. “[Friday night’s shooting] involved guns, that’s another crisis we have in this nation.”

The march, which occasionally ground to a standstill for hours at Judkins Park due to the massive turnout, proved boisterous, loving, and energetic for most in attendance. As they made their way through downtown, some marchers began dancing to the sound of Trinidad’s steel pans. 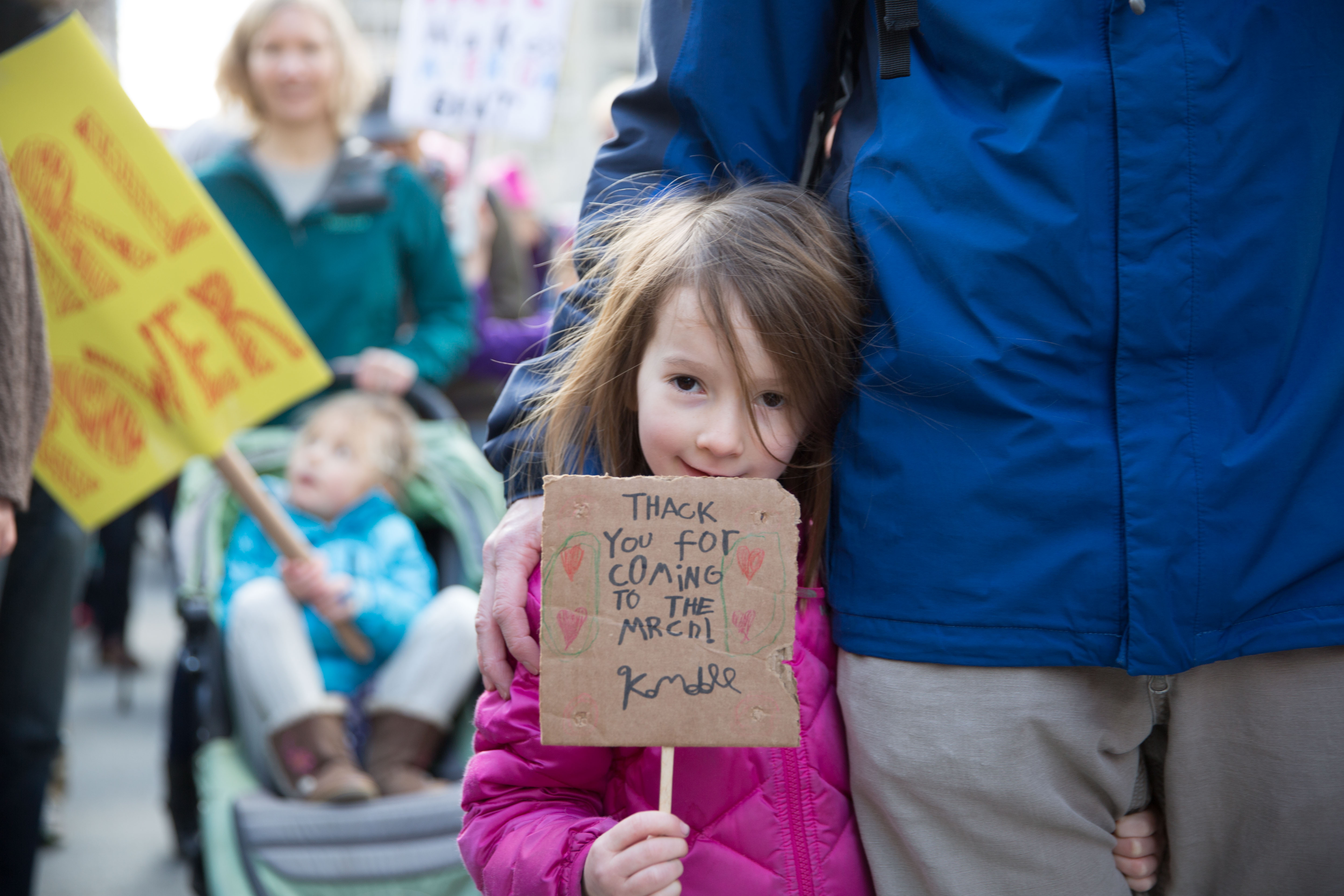 They were played by the Seattle Women’s Steel Pan Project, a multicultural, multi-generational steel pan band that teaches classes and performs, advocating for more women musicians.

“People getting energized, and so are we,” said the director, Oriana Estrada. “It’s an ideal setup, not a stiff crowd. People are enthusiastic and happy.”

She explained the history of Trinidad’s steel pans: the instruments had been forged from a spirit of resistance, the same origin as Saturday’s march. 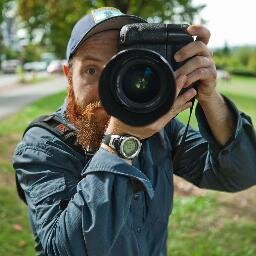 Alex Garland is a Beacon Hill based photojournalist and the founder of the Dignity Virus. He can be followed on Twitter @AGarlandPhoto