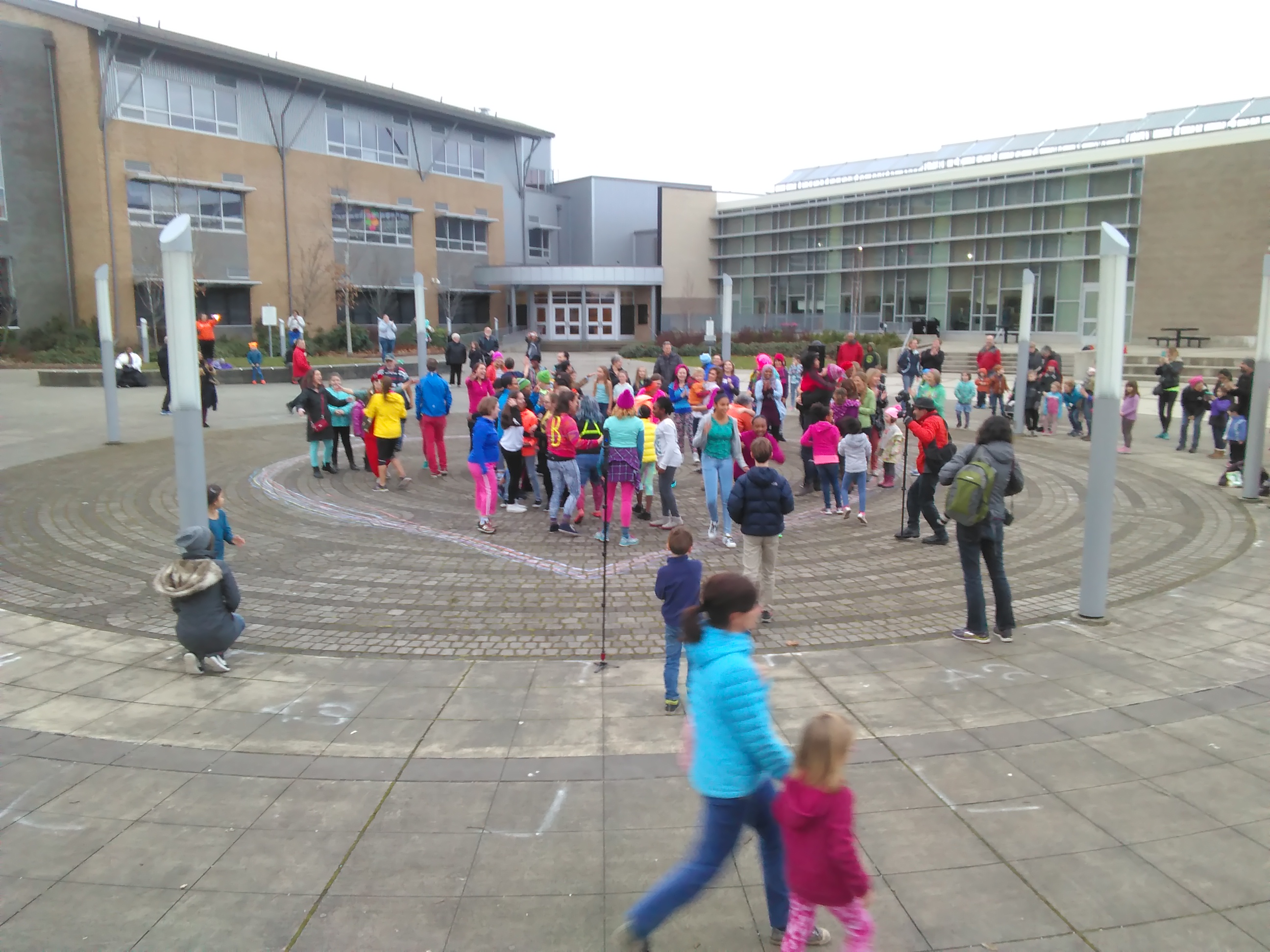 On Friday, South Seattle residents danced together at the Rainier Beach Community Center (RBCC) in a showcase of community solidarity during a flash mob for “love and diversity.”

For many of the 250 attendees, dancing with their fellow neighbors was a way of nourishing hope and positivity on a morning several expressed disappointment with the stated policies of the president sworn into office only hours before.

“It was fun to practice [dancing] with different people and combat the morning [inauguration]. We actually love our neighbors regardless of where they’re from,”said Melinda Anderson, flash mob participant and Rainier Beach resident.

At the flash mob, hosted by both the RBCC and the Rainier Dance Center, teachers and students from the Dance Center drew a multi-colored heart in the middle of thoroughfare outside of the Rainier RBCC. The students danced to songs about love and resistance including Macklemore’s song, “Same Love”, an athem calling for LGBTQI equality.

The crowd’s diversity was almost on par with the neighborhood’s composition, which warmed the heart of Rainier Beach-area resident, Ayane Ahmed,  a first generation immigrant.

For Ahmed, whose daughter is a student at the Rainier Beach Dance Center, the neighborhood’s diversity is a very important respite from an otherwise hostile national atmosphere.

The concern about racism here in Seattle weighed heavy with her, “Racism, different people judging [others]…it’s a problem, oh yeah.”

Ahmed declined to elaborate but as the conversation turned to her experiences  and  Mayor Murray’s pledge to make Seattle a ‘Sanctuary City’, she said that “he needs to do a little bit more.”  According to Ahmed that would include the mayor, “coming out to the community…come out to where the struggle is, come see the diversity…I’ve never seen him.”

Residents from outside of South Seattle joined the event as well.  Cora Sterling came all the way from Wallingord after hearing about the event online, “[I felt] that this is important…It’s important to show unity to get through.” Similar to Sterling,  the main attraction of Friday’s event was the  opportunity to display unity on a trying day.

“I cried watching my daughter dance in [the flash mob]. We are a diverse community and it’s beautiful. I hope my daughter can be raised in this kind of environment where we’re all as one–no matter what color, size, race, it doesn’t matter. That’s how I grew up. All this division and ‘your better than me because you have this or don’t have that.’ We should all help each other. Nobody should hurt in this world. We have plenty; God gave us everything,”said Melin Rodriguez, a Rainier Beach native.

Benoush Najafi, a local business consultant disheartened at Friday morning’s swearing in of Donald Trump as the 45th President of the United States said  “her soul needed to be uplifted” after the really contentious presidential campaign. “This is what we needed today…to come together as a community on this sad day. This is a very sad day for our country.”

With her daughter playfully hiding behind her leg, she contemplated about  the country’s future course, “I’ve had a lot of anxiety about this incoming administration, I’ve been fearing the worst. Not just for my family but, for our communities and our country at large.”

In Najafi’s opinion the flash mob was “ exactly what we need to be doing now and in the future…making interpersonal connections, to strengthen our communities because then we can effectively organize.”

Four friends, Sherry Simonson, Kristen Zavorska, Donna Linney, and Tracey Flynn attended the event ahead of the weekend’s Womxn’s March (that was found to be double the size of the inaugural celebration), instead of participating in Friday’s Immigrant Justice march organized by El Comite or Friday night’s Trump-Resistance  rally at  Westlake organized by Seattle City Councilmember Sawant’s organization, Socialist Alternative.

The friends preferred the flash mob “because it is local, and  there aren’t things done like this in Rainier Beach.”

During his inaugural speech, Trump’s image of “American Carnage” was criticized for painting set a dystopian, divisive and gloomy picture of the country. The Emerald asked the otherwise optimistic flash mob attendees about that picture, Simonson said that  the President’s image“ certainly doesn’t represent what my community is like, certainly not in my little Seattle bubble…I don’t think he spends time in a lot of communities.”

Flynn agreed, “personally I work with a lot of youth programs and with a lot of adults who work in youth programs…since the debates started we’ve seen an uptick in bias-based incidents…he’s created a backlash to what I’ve seen as progress, sure nothing is perfect but he’s given voice to people who were waiting for that opportunity.”

The four friends agreed that, this event represented the real community, an optimistic one that was interested in maintaining and spreading the idea of a unified America.

Video of Friday’s flash mob can be seen here

4 thoughts on “Rainier Beach Dances to the “Love” Beat”