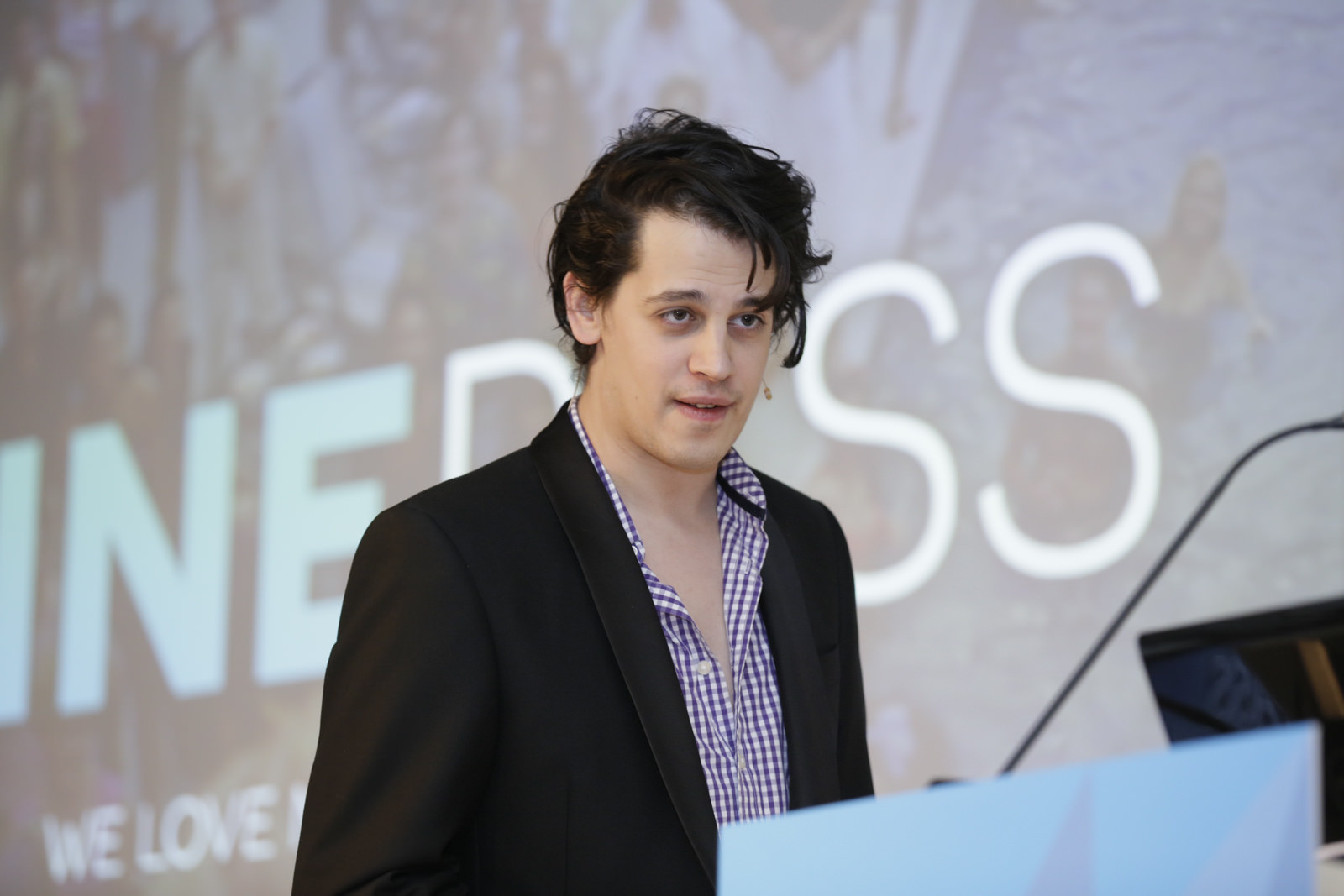 “I am considered, today, so dangerous that today I’m the second most dangerous man in America—after, of course, Daddy.”

“Daddy,” of course, is Donald Trump, and the person speaking was Milo Yiannopoulos—the professional outrage purveyor best known for promoting Gamergate, getting kicked off Twitter for his racist rants against actor Leslie Jones, and signing a $250,000 book deal. Yiannopoulos spoke Friday night at the University of Washington to a crowd of about 200—students and paying “VIPs” who made it inside Kane Hall before protesters outside blocked the entrance.

For those who made it inside the hall, Yiannopoulos’ talk was a rare opportunity to enjoy jokes about “hairy dykes,” “trannies,” and “Sasquatch lesbians” while police in riot gear protected them from the diverse community outside.

It was, in other words, a safe space.

While Yiannapoulos cracked jokes about delicate liberal “snowflakes” who can’t deal with the rough and tumble of the real world, protesters outside were getting pepper-sprayed, tear-gassed, and even shot. When word came down of the shooting, Yiannopoulos immediately pivoted to blame “the progressive left” for the violence, telling the crowd that it was under assault by “left-wing protesters with sharpened protest signs, with baseball bats, with flammable liquids, and, it sounds like, with firearms.”

That wild speculation turned out not to be true; the man who was shot was a medic for the protesters, not a Milo supporter. (Earlier today, the Seattle Times reported that the victim’s condition has been upgraded from critical to serious, and that the alleged shooter, who remained at large for several hours while the event continued, has been released .) Meanwhile, Yiannopoulos continued with his talk—because, he said, “if we don’t continue, they have won.”

For someone whose “Daddy” just won the White House, Yiannapoulos certainly loves to play the victim. Like many on the far right, he at least claims to long for a halcyon past where men were men and women were “happier in the kitchen,” neatly eliding the fact that men like him—pretty, vulgar, flamboyantly gay—were even more hated in that supposedly superior past than women who worked.

Yiannopoulos’ own sense of put-upon entitlement and victimization plays well with fans who feel their right to dictate the terms of the world has been stolen from underneath them. He flirts with the deep-seated homophobia of the right by joking about volunteering for electroshock conversion therapy now that Mike Pence is vice president, but he’s a cartoon character, both fundamentally unthreatening and, in the actions he provokes with his hate speech online, deeply dangerous.

In person, he comes off as an insecure narcissist. Onstage, he’s a kind of gay minstrel, applying lipstick and cracking jokes about sucking cock before crowds that would, likely as not, be more than happy to bash his head in if he wasn’t mouthing the words they wanted to hear. His flippant misogyny and racism come across as opportunistic and insincere. His thirst for the spotlight is palpable, and he seems like he might blink out of existence if people stopped paying attention to him.

So should we? It’s a classic question: Is it better to refuse to print noxious speech, on the grounds that reporting it only gives a platform to hate? Or better to expose it to sunlight, so that people outside the alt-right bubble can hear what its hero is saying and judge for themselves?

Well, I listened to the guy for an hour, and I think it’s worth knowing what he said—if only so readers can get some sense of how the alt-right thinks. (Yiannopoulos denies that he’s part of the alt-right, because, he says, he isn’t a “white nationalist”—his mother is Jewish—but the former Breitbart editor exists firmly within the alt-right milieu, and he is closely associated with white nationalists and their fans even if, as he claims, he is not one himself.)

The crowd—overwhelmingly young, male, and white—laughed uproariously at jokes that would have been right at home in an Andrew Dice Clay set circa 1988. (Google it, kids.) A woman protesting Trump: “Sexually ambiguous super retard turbo lez.” Rachel Maddow: “That nice young man.” The fake roses on his podium: “Lena Dunham’s seen more action. Well, actually, that’s not fair, because she did rape her sister.” Saturday’s Women’s March in DC: “Can you imagine 50,000 lesbians lost in Washington, D.C.? You’d be finding them in creases for weeks.” The women attending the Seattle Womxn’s March: “armpit-hair-braiding West Coast Femsquatches.” On the spelling “Womxn”: “The ‘X’ is silent, just like their own ex-boyfriends are silent. Because they ate them.”

You get the drift. Milo Yiannopoulos’s juvenile act, conducted with a heavy assist from PowerPoint and a script on his iPad, consists almost entirely of tired, faux-“outrageous” jokes about women, particularly lesbians and “trannies,” Muslims, and “cucks.” For someone who’s widely vilified as a white supremacist and neo-Nazi, Yiannopoulos has always targeted women with far more zest than racial or religious minorities.

Interspersed with the fat jokes, though, were a few genuinely frightening statements about specific women Yiannopoulos believe have wronged him, including Feminist Frequency’s Anita Sarkeesian, one of the main targets of Gamergate. (Yiannopoulos relentlessly promoted Gamergate, the online and real-life harassment campaign aimed at silencing women who spoke out against sexism in games and gaming culture). Of Sarkeesian, Yiannopoulos said last night, “People don’t hate you because you’re a woman. They hate you because you’re a cunt.”

So what about Yiannopoulos’s outrage performance art shtick appeals to College Republicans? It isn’t funny, it isn’t well-executed (a lot of the jokes failed to stick, in part, because Yiannopoulos drifted off on tangents, at one point literally getting distracted by a fly), and it isn’t, strictly speaking, new. What it is, I think, is what has always passed for rebellion among young conformists—speaking “truth” to “P.C. culture,” which is to say, parroting the racism and sexism of their fathers and grandfathers, even when they don’t really mean it.

But there are real-world consequences to Yiannapoulos’s seemingly harmless antics. Milo tells women to kill themselves, encourages his followers to harass women who cross him, and drives women off Twitter by inciting threats that make them fear for their lives. He loves to say that there is “no such thing as cyberbullying,” but his online bullying has led to real-life threats against people—like game developer Brianna Wu, who had to leave her home after a Twitter user sent her “a string of threats including a pledge to choke her to death with her husband’s penis,” according to Mother Jones. (Wu, according to Yiannopoulos: “Another straight white male.”)

The UW probably learned its lesson about interpreting “free speech” to mean “the right of anyone to use university facilities to say anything, at any time.” (Then again, maybe not: A student told me UW President Ana Mari Cauce responded to her letter asking the school to cancel or move the event by saying that, hopefully, Yiannopoulos would decide to cancel himself.) But there’s a lesson for progressives tempted to show up in numbers, too. Sometimes, even in the face of a loudmouth shouting insults, it’s more effective to ignore the bully.

Note: If you’d like to see an archive of my tweets from the event, including more details about the protests outside, I’ve collected those tweets on Storify.