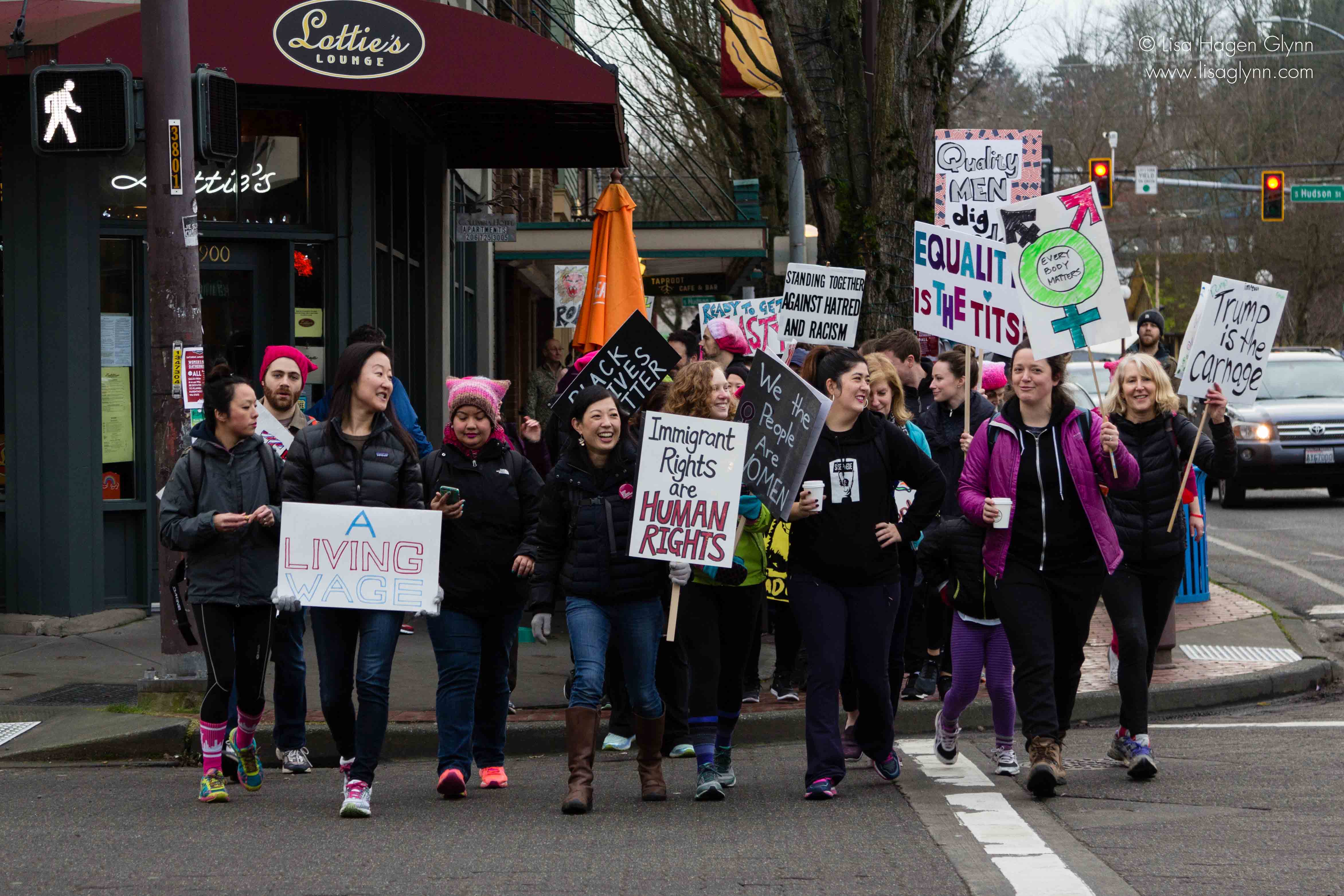 “This cloud that was hanging over my head [since the November elections] parted when I saw that crowd. And then the sun literally came out, and the eagles were flying all over the sky. Wow,” said Tamiko Nietering, organizer of the Womxn’s March on Hillman City.

On Saturday, Nietering led about 50 Southeast Seattle residents in a seven-mile march from Hillman City to Seattle Center, pausing at Judkins Park to converge with the larger Womxn’s March on Seattle. Throughout the route along Rainier Avenue, other marchers joined the group with protest signs and anti-oppression chants. The parent march then stretched for almost four miles, and crowd estimates for the event were upward of 130,000.

Nietering’s vision for the Hillman City march began in November, leading up to the U.S. national elections. “I felt like I had so much weight on my shoulders [to serve] the marginalized community. This is life and death for so many people. It was so scary.”

Although Nietering felt called to act, she was unsure how to begin. “I’m not a citizen here, so I do not have the right to vote in this country … but what can I do? I’d been searching for that, and I just felt helpless all the time—even registered voters feel helpless. But as a minority, as an immigrant, as a woman, I felt that there was something I had to do.”

The idea struck Nietering suddenly, while riding the #9 bus: “As I looked around Rainier I thought, ‘We’re going to march this [street]. My husband and I love this neighborhood. … We are members of South Seattle’s diverse community. These are my neighbors.’” Walking down Rainier Avenue felt especially poignant for Nietering following her own research about the historical diversity of the Rainier Valley, and the redlining and exclusion that had shaped it.

However, she lacked confidence in her authority to lead, which she related to both inexperience in organizing and her experiences of discrimination: “I didn’t know if the community will think it’s silly or no one will take it seriously. I didn’t want to put myself out there and not get a response and feel hurt and not want to do anything like this again. … When it comes to race issues, there’s been a lot of gaslighting. I sometimes don’t feel confident in what I’m feeling … that’s how I think women of color have felt [more generally]. I didn’t feel the courage.”

She turned to a Hillman City business owner whose comments Nietering had read online and admired, Alyssa Royse of Rocket Crossfit. “Within minutes, Alyssa and I were both in tears at this coffee shop. We’d just met, we don’t know each other, but we were in tears, and I thought, ‘These emotions are real.’ And then that’s when I shared my idea.”

Royse said, “I told [Nietering] that she had to do it herself—I was willing to cheerlead, to answer questions, amplify—but that she had a voice and a story that others needed to hear.  … And she rose to the occasion. Beautifully.” Royse also assured Nietering that, “I know the community will have your back.’”

Indeed, they did. Royse volunteered Rocket Crossfit for a sign-making party during the MLK holiday, Nietering’s neighbors and friends provided supplies, Big Chickie volunteered its parking lot and restrooms, and Tin Umbrella provided free coffee for the marchers. Nietering reflected, “It was beyond what I ever expected it could be … As it got closer, there was this momentum, this build-up … I felt like, ‘Oh, people might actually come.’”

Upon seeing the large group begin to gather at Big Chickie on march day, Nietering said, “I realized how sad I had been since November, and then I was so happy.” At Judkins Park, Nietering remarked that, “there were tears and emotions, and I could feel that people were really listening.”

Nietering recalled a sense of exhilaration and satisfaction: “Taking part in something that’s going to go down in history was so empowering. And we did it. Hillman City did it.” The march held personal meaning for Nietering as well: “I feel like I can advocate for more systemic change. … I realized that a small idea can make such a big difference.”

Asked how Nietering’s steps might influence others in southeast Seattle, Royse said: “Hers is the kind of voice we need more of. When I [as someone with privilege] stepped back, that made room for her voice. And look what happened. My hope is that other people who, like [Nietering], didn’t think they had a voice, a place or a community will see what she did and realize that they do have all of that. She inspired me, deeply. … She has great leadership potential, if people will step back and let her.”

Asked about lessons learned and next steps, Nietering said that by knocking on doors of local businesses, she realized that many are immigrant-owned and closed on Sundays because of family obligations. “My goal is, “How do you incorporate the community whose first language is not English? How do I get those voices heard? … We live in 98118—we’re holding on to one of the last communities in Seattle that is quite diverse—but within the communities it’s still segregated.” She plans to get to know more of her neighbors, to better hear, understand, and involve them in events like the march.

Nietering also recalled a powerful conversation at the Collaboratory three years ago, in which local business owner and community leader Karl Hackett, of Jacob Willard Home, had invited Nietering to join a leadership committee. “At the time I didn’t have the confidence, I didn’t have the knowledge, and I thought, ‘this is too intimidating.’ But I’m in a different place now, so I’m thinking about reaching out to him.” Nietering concluded, “All these people are sending messages thanking me, and I’m saying, ‘No, thank you!’ It’s electrifying, it’s beautiful. I want our neighbors to know that our Hillman City community is like no other community. I want people to believe that this community is special, and we have to work hard together.”