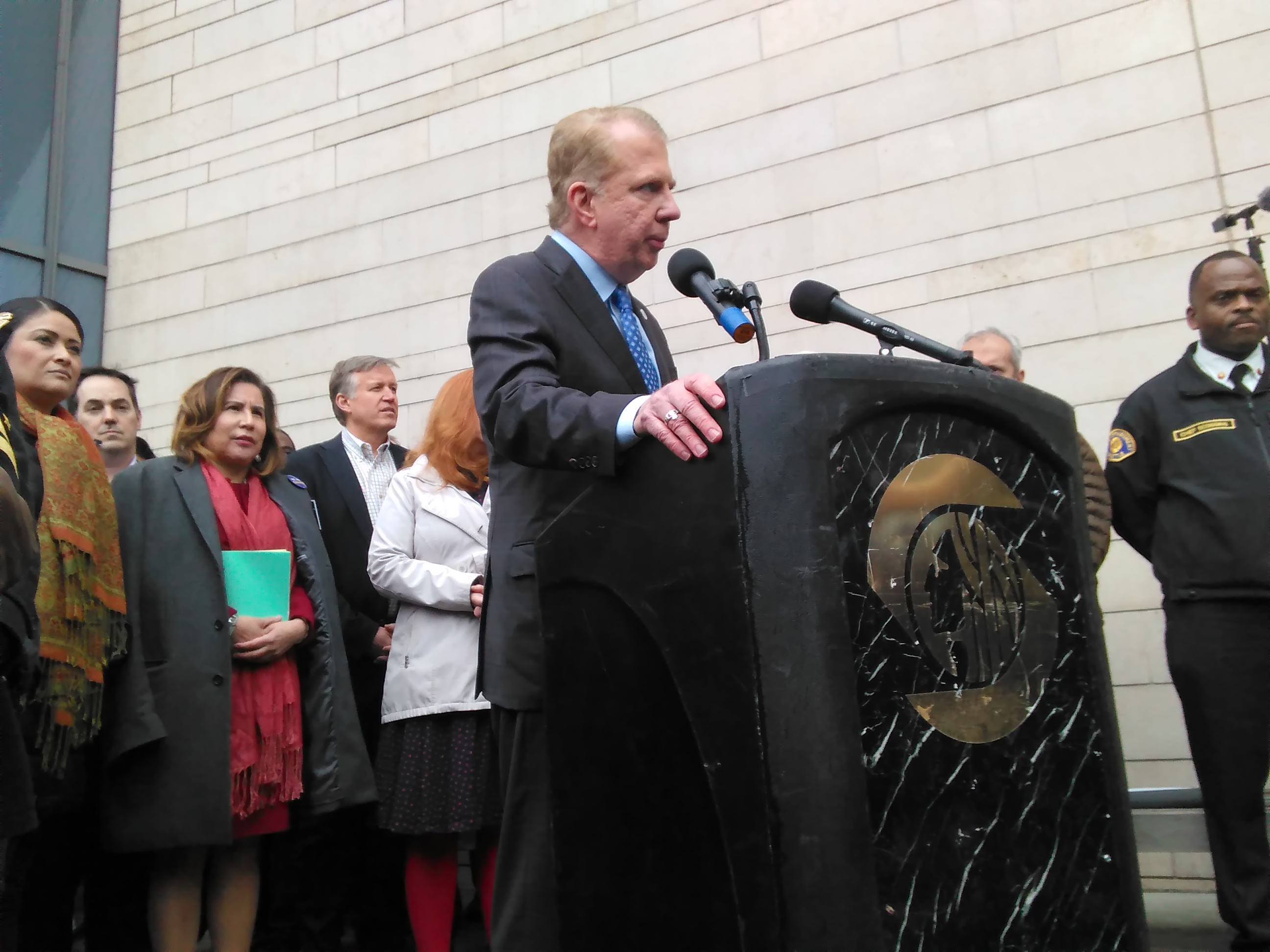 On Wednesday, Mayor Ed Murray and members of the Seattle City Council gathered outside City Hall to announce their opposition to two executive orders from the Trump Administration yesterday, one vowing to pull all federal funding from “sanctuary cities” that offer refuge to undocumented immigrant, with the other initiating plans for a border wall between the United States and Mexico.

Citing the executive order during World War II that authorized the internment of Japanese Americans, Murray said Seattle would not be bullied by the Trump Administration.

One out of every 5 Seattle residents was born in another country; according to a Census data analysis by the Seattle Times, the majority of residents in parts of South Seattle are foreign-born.

The census study showed that some South Seattle neighborhoods have a foreign-born population of nearly 52 percent.

Shortly after November’s election, Murray told reporters that Seattle would remain a sanctuary city even if it lost millions of dollars in federal funds that pay for housing, transportation, and police. Yesterday, he reiterated that commitment.

“I’m willing to lose every single penny to protect those people” Murray said. The city plans to fight the order in court, if it comes to that—the executive order will be complex and challenging to actually implement—but if the administration prevails, Murray said he is asking departments to come up with budget “reprioritizations ” (cuts) to pay for an estimated $75 million shortfall.

Asked specifically about the city’s ongoing plans to address homelessness, which rely heavily on federal dollars, Murray said, “As you know, I believe that the answer is a federal [partnership],” but added, “One option is to go back to the ballot and ask the people of this city for more revenue.”

“The money is not going to disappear tomorrow,” Murray added .

Seattle Police Department Chief Kathleen O’ Toole, who also denounced Trump’s anti-immigrant orders, told the Emerald that leaders from police departments she’s been working with across the country say that they simply do not have time to enforce immigration and federal policy.

Council member Lorena Gonzalez, whose parents came to the United States as undocumented farmworkers, echoed Murray’s commitment to protecting immigrants and refugees in Seattle, and announced that on January 30, she will introduce a resolution designating Seattle a “welcoming city.”

The resolution establishes that city employees will defer all requests from Immigration and Customs Enforcement (ICE) to King County, which does not turn over immigrants to ICE without a federal warrant, and that no city employee will “cooperate or assist with any unconstitutional or illegal registration or surveillance programs or any other unconstitutional or illegal laws, rules, or policies targeted at those of the Muslim faith and/or of Middle Eastern descent and rejects any attempts to characterize family, friends, neighbors, and colleagues as enemies of the state.”

It also replaces the word “citizen” with “resident” in the city’s mission statement, and establishes that the city “rejects any effort to criminalize or attack the Black Lives Matter social justice movement.”  A local offshoot of the movement heavily criticized Gonzalez and her colleagues for their support for an estimated $146 million new North Seattle Police Precinct building, known by critics as the“Bunker.”

Asked about the North Precinct building, Gonzalez said, “I think we still need a precinct in North Seattle, [but] I don’t think we need to spend tens of millions of dollars on a new precinct … especially now, when we’re looking at a scarcity of resources as part of the re-prioritization exercise .”

The resolution also proposes a legal defense fund for immigrant and refugees who are facing immigration issues in court and can’t afford an attorney; undocumented immigrants, unlike citizens, are not entitled to a public defender in immigration court. The fund would be administered by the city attorney’s office or nonprofit organizations

The big fear on everyone’s minds however, was the funding shortfall that the city is bracing itself for. The Mayor has always held that the city would adhere to its sanctuary policy while enduring the loss of federal funds. The Mayor’s office has estimated that $75 million over the next 10 years would be lost to Trump’s assault on sanctuary cities if a legal challenge that he is currently mounting fails.

Now, in this toxic environment, we must do even more. We will offer even greater assistance to   community partners providing legal services and immigration assistance. We will increase support and resources to those who can gain citizenship. We will work with local cities and  other counties to establish stronger safeguards to protect undocumented immigrants and refugees.

I am dedicated to fixing our immigration system…Allowing immigrants to become productive      members of our society will only strengthen our communities, our economy, and our country’s future. I applaud our region’s local mayors and Governor Inslee for stating clearly that      Washington state will remain a safe haven for those in search of safety.

On homelessness, however, the Mayor flinched a bit, “as you know I believe that the answer is a federal [partnership]…one option is to go back to the ballot and ask the people of this city for more revenue.” Though it’s only the worst-case scenario as “the courts have clearly said that you cannot punish or coerce a jurisdiction by taking away their money…if there is not a nexus or connection between the program you’re trying to enforce and those funds, you cannot cut those funds.”

At the end of the press conference when asked by the Emerald whether or not he would come to South Seattle’s neighborhoods and work with leaders in the area to tackle problems head on (in response to criticisms in a previous article) he said, “our department of immigrant and refugees, along with our non-profit partners are continuing to ramp up that effort” adding, “I’m [present] all the time, look at my schedule!”

Cliff Cawthon is a Seattle based writer originally from New York’s queen city, Buffalo. Clifford has been civically engaged since he was a teenager in Buffalo and his advocacy work taking him to places as far away as Cuba.  He’s also an alumni of the University of Manchester, in the UK, where he graduated with an M.A. in Human Rights and Political Science.