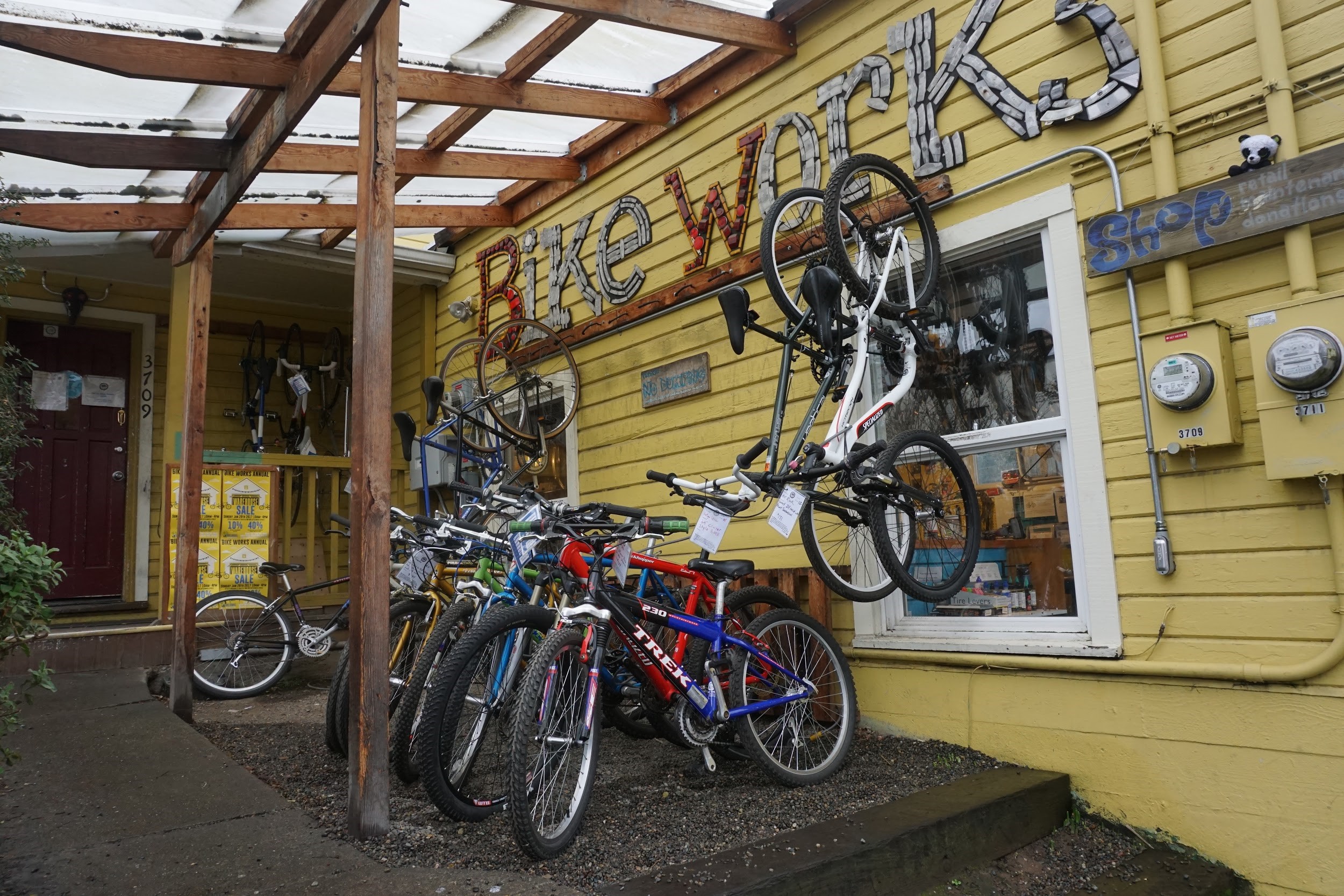 For 14 years, Homer O’Neil has had a front row seat as Columbia City has evolved side-by-side with a local nonprofit stalwart.

Bike Works, the community-based bicycle enthusiast group founded in 1996, has offered programs for youth and repair services for decades out of their quaint yellow community bike shop posted on S. Ferdinand Street in Columbia City.

O’Neil now finds himself there most days repairing bicycles.

“I got a lot of help and education through this place,” O’Neil said, black grease covering his hands from working on bikes all day.

A Columbia City native, O’Neil earned his own bicycle through a Bike Works program at the age of 9. He’s affection for the organization blossomed into an internship with Bike Works after his family’s restaurant closed down.

Now 23, O’Neil works full time at the very same yellow building that was a second home to him as a kid.

Bike Works continues to offer the South End community a bevy of activities that attract people like O’Neil to the organization, including neighborhood bike riding clubs, repair classes, youth summer camps, and job skills training. More than 1,300 youth are served every year by the non-profit, with several children from low income families receiving thousands of bikes and helmets throughout the years.

The organization is also the only local Seattle bike group that offers an Earn-a-Bike program.

The after-school program teaches kids between the ages of 9 and 17 how to repair bikes. After completing the course, kids who complete a certain amount of community service hours repairing and building bikes earn their own, just like O’Neil.

“He’s one of the perennial favorites for our customers,” Tina Bechler, Bike Work’s Program Director.

At 14 years and counting, Bechler is Bike Work’s longest serving employee, and is proud to witness on a daily basis the kind of people the program has turned out in O’Neil.

“I’m just incredibly proud of who he’s become, watching him interact with my coworkers, other staff in the shop, and customers.”

The organization now host its classrooms a block away in a building on S Hudson Street far bigger than the original shop.

With the expansion also came a changing community.

“It’s always changing. The area has become so gentrified that who we were serving six years ago is totally different to who we are serving now,” O’Neil tells me.

He adds that throughout the years he’s seen his neighborhood becoming predominantly whiter and wealthier every day, displacing the low-income people in the area Bike Works aimed to help.

The community’s changing circumstances has lead to Bike Works’ crafting a strategic plan to reach out to more South Seattle neighborhoods including Rainier Beach. It also plans to add leadership and apprenticeship opportunities for youth, expand its job skills training, and formalized partnerships with Southeast Seattle schools.

The BikeMobile, the organization’s mobile repair shop, currently visits different South End neighborhoods during the summer stationing at parks and libraries. But the BikeMobile also offers opportunity to at-risk youth by providing them with training and summer internships.

“We are very committed to southeast Seattle and even though there has been a fair amount of gentrification we still know that within a five-mile radius there are ten thousand families with youth,” said Deb Salls, Bike Works’ executive director.

“What we were starting to recognize is that we still haven’t completely served the youth in South Seattle and until we’ve done that it needs to remain our focus,” she said.

Even with Columbia City’s changing demographics, O’Neil feels like he’s still helping his neighbors and community while providing the city with a friendly bike shop that shuns elitism.

“From being a kid to an adult Homer is exactly what we would hope and expect,” Bechler said. “ [He’s] Someone who’s confident, thoughtful, believes in how he has an impact, and has a voice.”

O’Neil said he thinks the organization has done enough expanding and hopes they go back to doing what they do best, focusing on helping the community that has now been displaced in Columbia City.