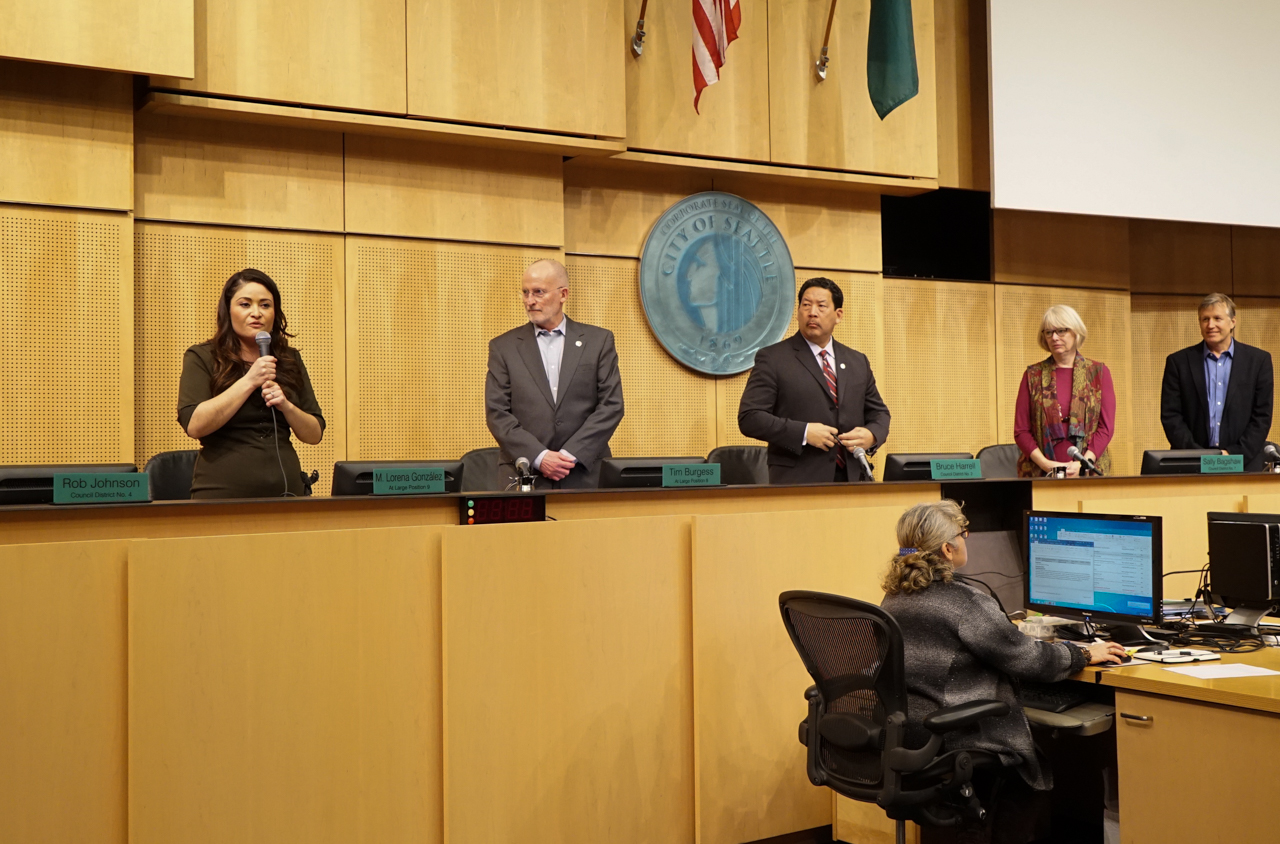 After a weekend of concerted resistance at Sea-Tac Airport, Tacoma’s Northwest Detention Center and  Westlake Park, the Seattle City Council unanimously adopted a Welcoming Cities Resolution on Monday that serves as a rebuke to the Trump administration’s recent executive orders.

According to council members, the resolution cemented Seattle’s commitment to resist the administration’s actions in recent days that banned entry of travelers from seven majority-Muslim countries, and detained approved refugees, valid visa holders, non-US dual citizens and US legal residents at ports and airports – actions that have been roundly characterized as anti-immigrant and resulted in a national outcry last weekend.

The resolution, sponsored by Councilmember Lorena Gonzalez was given top priority at today’s meeting of the full council. Early on, Council President Bruce Harrell even joked that the nearly 400 in attendance“[probably didn’t] want to hear our…land use decisions today”.

As written, the resolution commits the city to a wide-ranging set of steps to support immigrants. The measure also firmly places the enforcement of illegal immigration on the federal government. It also outlines that City officials and staff are not to aid, provide information or support a crackdown on immigration in any way – only focusing resources on addressing civil and criminal justice matters.

Councilmember Gonzalez, along with Councilmember Mike O’Brien introduced two amendments to the resolution. One amendment requires a report to the council outlining how information and resources are shared and utilized under ‘mutual-aid agreements, which allow SPD to assist police departments in other jurisdictions during times of distress. This comes after Mayor Ed Murray received backlash at the Seattle Police Department presence and aid of the Port police during Saturday’s Sea-Tac Airport protest.

The measure also sets the groundwork for a legal defense fund for many immigrants facing challenges gaining citizenship and other hardships. In a meeting with Councilmember Gonzalez earlier in the day, she said that she was mimicking New York’s model of public legal defense and assistance for immigrants begun in 2014.

More than 36 speakers voiced their support for the resolution during the public comment period, which extended for over an hour. This meant the meeting functioned more as a city-wide reaffirmation to immigrant justice than a debate over exactly what that all entails.

Marcos Martinez, the Executive Director of Casa Latina set the tone by saying,” We do not accept hate, we do not tolerate hate in our communities…this is a step we must take to affirm our values in our communities.”

Some of the public comments also included second-hand testimonials about the importance of city services remaining open and accessible to immigrant communities; two key provisions of the measure.

Elaine Fordyce, an Immigration Lawyer with the Hawkins Law Group, shared chilling stories of her immigrant clients routinely experiencing domestic violence.  She repeated one such story in which her client said: “I’m afraid my [boyfriend] is going to kill me but, I’m afraid to call the police. I don’t know what to do.”

Labor representatives were also a part of today’s conversation, with Teresa Mosqueda, the city council candidate and Washington State Labor Council Political and Strategic Campaign Director, delivering a statement on labor’s fundamental relationship and commitment to immigrant communities. Other labor unions, such as UFCW 21, also testified on behalf of the resolution.

The President of the Committee of American- Islamic Relations, Washington Chapter also testified with a statement that directly referenced the increase in hate crimes against Muslim’s that has followed Donald Trump’s rise to the presidency:

Just a few months ago, in March [2016], a young American Muslim girl in Everett was wearing    a head scarf and walking on the sidewalk when she was attacked and beaten by a grown man      who yelled the same anti-Muslim slurs and conspiracy theories that we see daily in mainstream  headlines, while he viciously beat her, leaving her with a bloody right cheek, bruised ribs,   concussions, and damage to her head.  The man who beat her was repeating anti-Muslim slurs that are repeated in mainstream headlines almost daily.

During testimony, two members from the city’s Immigrant and Refugee Commission, which played a key role in developing the resolution, warned attendees to remain vigilant about divisive tactics while praising the resolution as a step forward.

Co-Chair Luis Ortega, directly challenged attendees and the council, saying, “[Seattle] will be judged, not by public statements but by public policy.” Jen Calleja, another commission member, warned the chamber that the city’s support of the immigrant and refugee community shouldn’t slip into to the old stereotype of the “good immigrant vs. bad immigrant” based on dominant societal expectations.

At the moment the council decided to read the resolution for a vote, Councilmember Gonzalez characterized it as Seattle sending the message to Washington D.C. that “we will not capitulate”, citing that 1 out of 5 Seattleites are foreign born and “they are our Seattleites, they are our Americans.”

She also shared her background as the daughter of undocumented immigrants in Central Washington and her Chicana identity. Upon rhetorically asking Seattle “are you ready” the room rose in a standing ovation of cheers and applause that is usually reserved for Seahawks games.

The council then voted unanimously to support the amended resolution (it can be read here).

Councilmember Kshama Sawant followed Gonzalez and reaffirmed that “together we’ll build a wall of resistance and Trump will fall” in an effort to build on the momentum of the weekend’s protest and the city’s organic mobilization. Though, Sawant did not receive a major standing ovation as Gonzalez, her rallying cry ended with the public reveal of a proposed city ordinance in the works that would prohibit SPD from intervening in protests outside of Seattle.

Cliff Cawthon is a Seattle based writer originally from New York’s queen city, Buffalo. Clifford has been civically engaged since he was a teenager in Buffalo and his advocacy work taking him to places as far away as Cuba.  He’s also an alumni of the University of Manchester, in the UK, where he graduated with an M.A. in Human Rights and Political Science.

If you value the Emerald, we need your financial support!