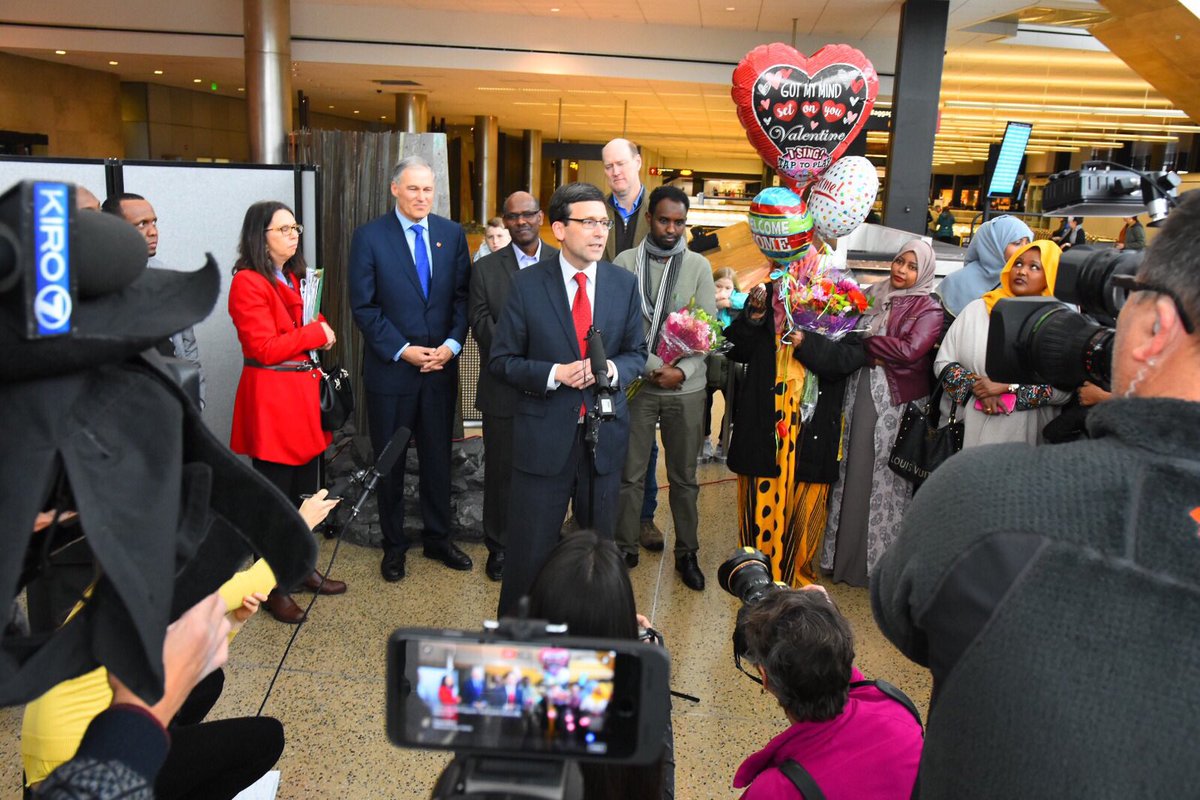 Isahaq Ahmed Rabi arrived at Sea-Tac International Airport from Somalia and was greeted by a crowd Monday, 10 days after he was blocked from entry by President Donald Trump’s executive order stopping travel by foreign nationals from seven Muslim-majority countries.

Rabi first arrived at Sea-Tac on Jan. 28 — shortly after Trump signed the executive order — and was put on a plane to Vienna.

But on Monday (Feb. 6) Rabi was greeted by his wife, his other family members, and Gov. Jay Inslee, state Attorney General Bob Ferguson and Port Commission President Tom Albro and a group of reporters.

Inslee addressed the impact of Trump’s executive order on Rabi’s wife, who is a U.S. citizen.

“At this airport last Saturday she was filled with tears of sorrow and pain. And today I saw tears of joy,” Inslee told reporters. The governor’s office posted video of the press conference on his Facebook page.

The lawsuit challenging the executive order was filed by Ferguson and his office, claiming that “separating Washington families, harming thousands of Washington residents, damaging Washington’s economy, hurting Washington-based companies, and undermining Washington’s sovereign interest in remaining a welcoming place for immigrants and refugees.”

The Trump administration has argued that the executive order is necessary for national security and that the president has the authority to put a stop to travel from certain countries.

Rabi’s cousin, Said Abdi-dhahar, is a Boeing engineer who spoke to reporters on behalf of their family.

“As you know Rabi was one of those many people who were deported from this country on Saturday the 28th at SeaTac airport, here, although he had a legal visa to come to the U.S. issued by the government of the U.S.,” Abdi-dhahar said.

The lawsuit was heard Friday in U.S. District Court for Western Washington, where Robart put a hold on the enforcement of the travel ban. The hold took effect nationwide.

The Trump administration is challenging Robart’s ruling in the 9th Circuit Court of Appeals in San Francisco on Tuesday, which will decide whether to reinstate the travel ban.

Trump’s executive order also put a temporary hold on the U.S.’s refugee program, including a permanent stop to accepting refugees from Syria. The order also affected green card holders — permanent residents — but the administration soon announced that part of the order would not be enforced.

Dozens of visa holders and permanent residents throughout the country who were originally barred from entering the U.S. have entered the country in the past week, including several through Seattle.

Nationwide, and in Seattle, Trump’s executive order drew protests. More than a dozen states and about 100 companies, including Microsoft and Google, have filed briefs supporting the challenge to Trump’s travel ban.

Ferguson on Monday said he expects Washington to prevail in what is the first major legal challenge to Trump’s executive orders.

“It’s nice to work on a case of this magnitude that impacts so many people in a positive way and that holds the president accountable to the rule of law and to the constitution,” Ferguson said.