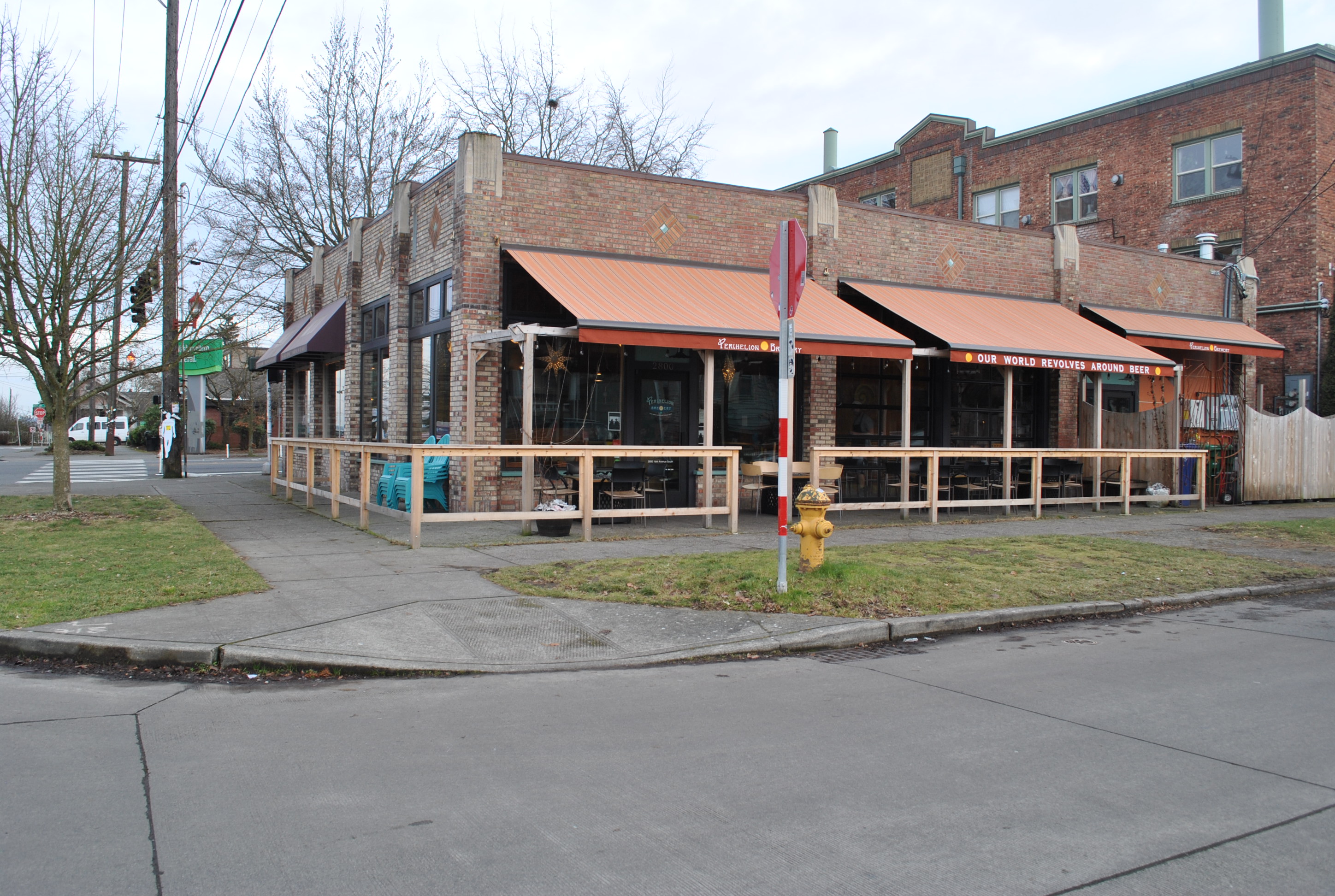 One Year, One Orbit

Perihelion Brewery, a tiny restaurant and brewery on the corner of 16th and McClellan in South Seattle’s Beacon Hill, is as inviting from the outside as its layers of interest unfold from the inside.

Perihelion Brewery (pronounced pare-uh-heel-ee-uhn) literally means the closest point in an object’s orbit around the sun. Owner Les McAuliffe says picking the name was as important to him as naming a child. Perihelion was the name of one of the first beers he created when he was home brewing so it was a careful, but easy choice.

The homey feel of the outdoor fire-pit tables surrounded by comfortable beach-like chairs welcomes you to the restaurant’s front porch. Inside, you’ll find the menu and beer selection sprawled on a giant chalk board. The staff is friendly and helpful. The open kitchen gives you a behind-the-scenes glimpse of the food as it’s carefully crafted by two very capable chefs. Chefs Tony and Brett somehow move fluidly in the tiny cooking space. The high ceiling and industrial beams, floor to ceiling windows and high dining chairs give the restaurant a rustic but modern feel.

McAuliffe was a contractor by trade and did the build-out of this space himself. When the recession hit, his small businesses folded. With his wife’s encouragement, he turned his hobby of brewing in his garage into something bigger and sustainable.

“The craft beer industry was taking off at that time,” said McAuliffe. “I went around and looked at a few other craft breweries and thought, I can do that.”

Because of zoning rules, this space needed to be a restaurant and brewery combined. McAuliffe says he wasn’t interested in having mediocre food just to have a brewery so he turned to a good friend to help develop the comforting but foodie-appealing menu.

The menu is designed to function in a small kitchen and features high-end burgers cooked to temp. The Beacon Burger made with all-natural beef, rich cheddar cheese, and spicy aioli features a pile of smoked pork belly (bacon’s more sophisticated sibling). It’s the most popular dish served at Perihelion and doesn’t disappoint. It comes on a toasted brioche bun and melts in your mouth.

The meat smoker stays busy at Perihelion to deliver a selection of popular sandwiches. The smoked brisket is tender, juicy and hearty. The pulled pork sandwich is must-try with a generous amount of fork-tender, perfectly seasoned meat that nearly dissolves on the tongue. The infused peppers give this one a kick. Pickled vegetables, tangy slaws, perfectly crispy fries and deep-fried Brussels sprouts are go-to staples here too.

Perihelion’s one year anniversary was February 4. McAuliffe made a special brew called a Quince Braggot, a cross between ale and mead (honey wine). The concoction has been aging in reclaimed rye whiskey barrels for eight weeks and promises to give beer aficionados and all his customers something special. The rest of his beer is brewed in giant barrels in the back room of his restaurant. Each month, he features something new but his Little Belgian Blonde and Icarus Saison beers are contents.

Come June the tiny restaurant won’t be as tiny. The Perihelion is taking over part of the space of the hair salon next door. It should bring 30 additional seats and some more cooking room for the chefs.

No need to wait for the next orbit to try Perihelion, its star is shining bright already.

Rosalind Brazel is a self-professed food snob. She has been food obsessed since childhood and enjoys dining out as much as she does creating meals of her own. She was recently featured as a Cook-to-follow in Allrecipes magazine and served as a judge on the cooking show Dinner Spinner. She calls South Seattle home.