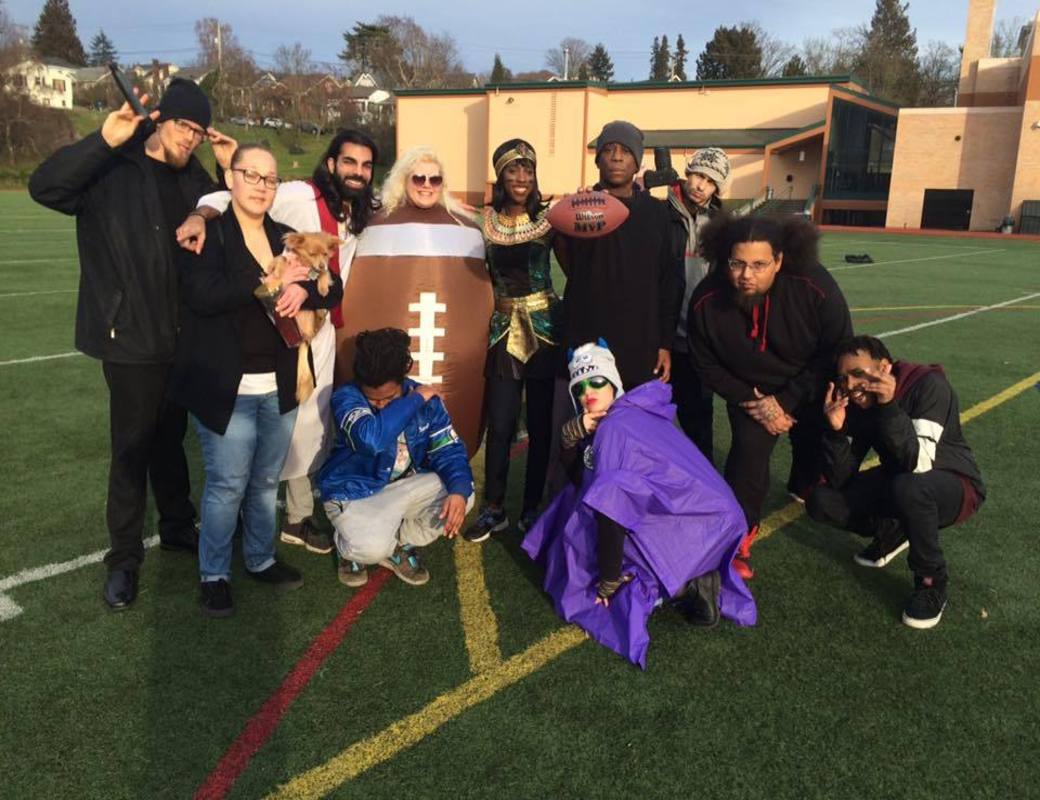 The air was pure. The rain was light. And Jesus H. Christ (yes, that one), finally back after a 2,000 year off-season, was ready to throw some pigskin…. kosher, of course.
“I LOVE this City”, Jesus, now calling himself “Josh”, said to local reporters. “Like, when my Dad sent me back and chose Seattle, I wasn’t expecting the fanfare to be honest, had no clue I was such a popular guy. Only had about 12 friends last time I was here, so 1 BILLION PLUS is like, whoa dude!!”
Speaking to residents of the Mt. Baker Artist Lofts Community Room during the #JOSHBOWL festivities, which he calls the “Newrusalem Community Center”, Josh came back to Earth last Summer to “fix some stuff my Dad is pissed about”, as he puts it.
“The Uhuru crew came to me after #JOSHDAY, and were like, let’s throw a #JOSHBOWL for the Superbowl and fundraiser for our group. Plus we can make it a blanket drive for the local neighbors and critique capitalism and what not. You know I was all about that. So I was like, can we make it an all city, all ages, all abilities flag football tournament and a pizza party? And they were like, sure. So, yeah, here we are! Super sick, am I right?”
Josh and his small group of local neighbors calling themselves #TEAMMeek, ended up with 20 BAGS of donated blankets and clothes for the local community, and also threw a Pizza Party for the winning team. The “TEAMMeek All-Stars” narrowly won the first #JOSHBOWL 21-14, with “Jon tha Daptist” taking the MVP, and Jasiah Clark taking the game winning ball provided by the Mayor of Genesee, Ready Ron Beats.

Josh is excited about what this year has to offer, “After Seattle pulled out of Wells Fargo, I was like, dope! We got some traction, let’s put some action in it! Let’s stop this youth jail and fund a huge community garden and feed the people? Call it ‘Lil Eden?’ Anyways, I think the guy who runs the Emerald said I can do a column? I think I’ll call it #lovejosh”

Look out for the #lovejosh op-ed Jesus Piece to be featured on select Sundays this year on the South Seattle Emerald. And honk when you see a savior.

Jamil Suleman is an artist and activist from Kirkland, WA currently residing in South Seattle. Find him online at http://www.jamilsuleman.com and follow his Jesus Piece at @supitsmejesus on Twitter.