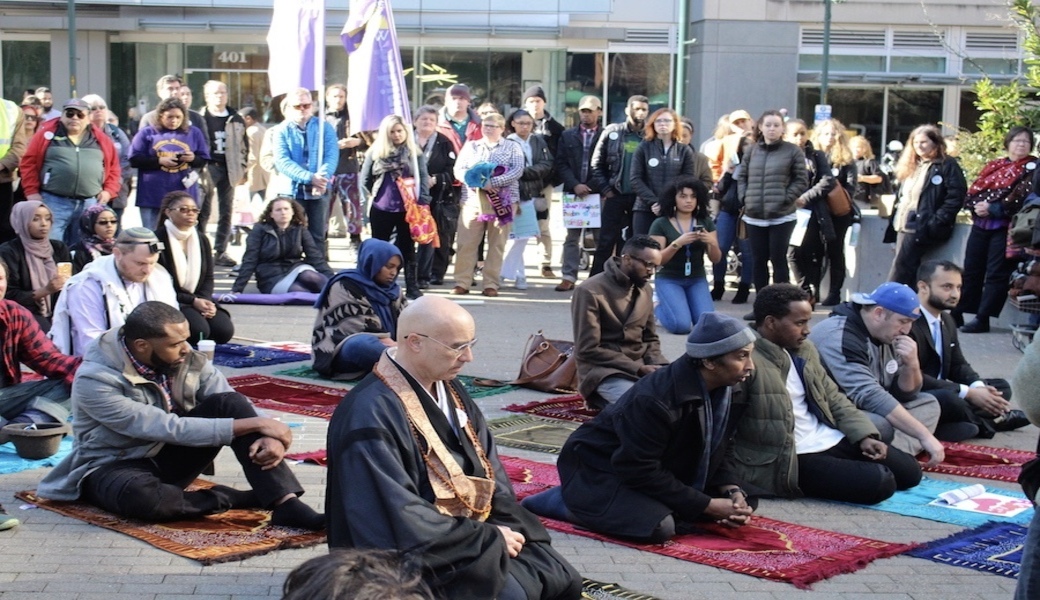 On Friday afternoon, Amazon employees gazing from the windows of the tech behemoth’s South Lake Union headquarters caught a glimpse of hundreds of devout Muslims, clergy, labor unionists and some of their fellow workers engaged in a mass prayer demonstration to support  some of the company’s subcontractors who see Amazon’s current policies as religiously discriminatory.

Security Industry Specialists (SIS), based in California, was hired by Amazon to provide security services for its sprawling campus. While Amazon has provided prayer rooms for its high-level Muslim employees, others working at lower-wage jobs for SIS have no access to those rooms.

Those at Friday’s pray-in want Amazon to make those rooms available to all Muslims working in their buildings, including those employed by its subcontractors.

“There’s been issues regarding religious prayers, [with some not being] given a space to practice,” said Ismahan Ismail, a current security specialist at Amazon. “When I did speak up, I was actually retaliated against. I had someone step on my prayer items.”

Ismail reported the incident to the HR department, but said nothing was done. She was told that since there were no cameras to record it the matter was closed. As it stands, she’s currently on medical leave because of stress due in part to the incident.

Essag Hassan  also works for SIS, under Amazon. A former Massachusetts police officer, Hassan asked his employer for a place to pray. They simply told him to go pray in his car. He didn’t refute, but rather pointed out that it doesn’t face toward Mecca (a requirement for Salah). The way the parking lot is situated, there was no way he could park such that he faced Mecca. Two days later, Hassan was suspended pending an investigation.

Hassan received no such notification, and his calls to HR remained unanswered. During this time, Hassan and his wife were unsure of his job status. They are still uncertain.

“My wife was pregnant,” Hassan told the rapt crowd, voice quivering as his face tensed up and his eyes became hollow puddles, “and lost the baby because of stress.”

After pausing to collect himself, he pressed on. An organizer to his left rubbed his back.

“There’s a lot of employees here who are scared to step up,” Hassan continued. “I’m not. Because I lost my child.”

Before speakers began, a crowd of marchers rounded the corner, led by Seattle City Councilmember Kshama Sawant. They descended from downtown’s US District Court where a federal magistrate decided the fate of  Daniel Ramirez, whose case made national headlines after being arrested by immigration agents last week despite being a DACA-recipient.

An unexpected and unscheduled speaker then emerged from the crowd: Usama Baioumy. He’s also a Muslim Amazon worker, though within Amazon itself and not under the SIS subcontractor.

“I want to set the record straight,” he said. “Amazon provided us with a prayer room … I pray in the room here. Amazon helped us by providing prayer rooms across the building.”

While potentially accurate, the Vice President of Uplift Dawah, Abdirahman (O.J.) Hassan, explained that Baioumy might not understand how the prayer rooms are limited to specific worker categories, and not to those employed by SIS.

Asha Mohamed also spoke. She’s a refugee, but has lived in the U.S. for 10 years, and is a naturalized citizen.

“The past few weeks, we have seen our constitutional rights being stepped on,” she began. “We are not divided by issues, we are just too busy working low wage jobs…it’s race and class!”

Mohamed went on to explain that people must make sure to not become part of the problem by viewing issues plaguing immigrant, Native Americans, and Black people as exclusive to those communities.

“I refuse to obey an authoritative, racist administration,” Mohamed said. “I want to make sure we don’t burn out, it’s only been three weeks. But I am proud to be living at this time as a Black Muslim woman because I stand on the shoulders of giants.”

Velvet mats were then laid on the ground for one of the day’s five Salahs, this one le by O.J. Hassan. Busy workers walked by throughout the event, security tags swinging around their necks. Almost none of them stopped to take a look or listen to the praying demonstrators.

This isn’t the first time SIS has come under fire in Seattle. Back in January, Seattle City Councilmember Lorena Gonzalez wrote directly to John Schoettler, a Director for Amazon in Seattle.

Her letter served as a double-edged sword: While Gonzalez stated she would vote for a Block 21 Alley Vacation amendment that would benefit Amazon, she contended that the company needed to address SIS’s unethical practices.

“I would feel remiss in my duty as a Seattle City Councilmember and former worker’s rights attorney if I did not communicate to you clearly and unequivocally my strong concerns with your initial and continued commitment to retaining a subcontractor that has engaged in unlawful employment practices,” Gonzalez wrote. “The claims range from wage theft, denial of legally mandated breaks and benefits, discrimination and harassment. These are serious claims that have been substantiated.”

Indeed. In 2015, the Office for Civil Rights settled with SIS after it was found the company violated Seattle’s Paid Sick Leave and Safe Time laws. The previous year, Service Employees International Union, successfully lobbied Google to drop SIS as a contractor.

For several months afterward, SIS dedicated a webpage to denouncing SEIU as making vicious attacks against the company. It has since been taken down. The local union does call the business elite who hire SIS the “executive protection squad,” which includes Amazon CEO Jeff Bezos.

The Seattle Human Rights Commission and Seattle City Council later wrote to Bezos, with both finding sufficient cause for concern regarding SIS’s practices. They requested the CEO review the subcontractor’s treatment of its workers. But Schoettler, Seattle’s Amazon director, responded saying that SIS’s charges don’t involve Amazon.

To which, Gonzalez wrote: “While Amazon’s legal liability for these unlawful employment practices may not be triggered, these practices do take place on your property.”

Last year, SIS faced litigation and accusations of harassment and discrimination from a previous Seattle manager, Abdullah Haydar. Around the same time, Amazon itself faced a lawsuit because it instructed contractors to fire delivery drivers based on criminal background checks, disproportionately impacting Black and Latino workers. The criminal backgrounds, in some cases, were quite old, according to the Boston Business Journal.

Nearing the end of the religious practice and protest, Rabbi David Basior beautifully sang a Jewish song in Hebrew then again in English, and cited a Jack Riemer poem: “We cannot merely pray … we must find our own path of peace.”

Reverend Shelly Fayette came to say her piece as well, apologizing in what ways she could because “Christians too often have been perpetrators and bystanders” of injustice. She vowed this would no longer be the case.

In a more light-hearted but nonetheless serious conclusion to the day, three Raging Grannies played off of traditional old-time American songs to advocate for Muslim rights.

“Join this gaggle of grannies,” they sang, “Get up off your fannies.”

Meandering in the audience throughout the demonstration was Jay Thompson,  who became aware of the event through the Faith Action Network.

“As a Catholic, I’ve never prayed with Muslims before and it was an honor,” Thompson said. “It feels like a great gift offered to me spiritually. And these Muslim folks who are brave enough to stand up against their employer, it’s just really gutsy.”

The pray-in showcased a mix of various faiths, all gathered in solidarity for religious freedoms.

‘Together we shall overcome,” O.J. said during Salah. “Let’s unite and let’s respect one another.”