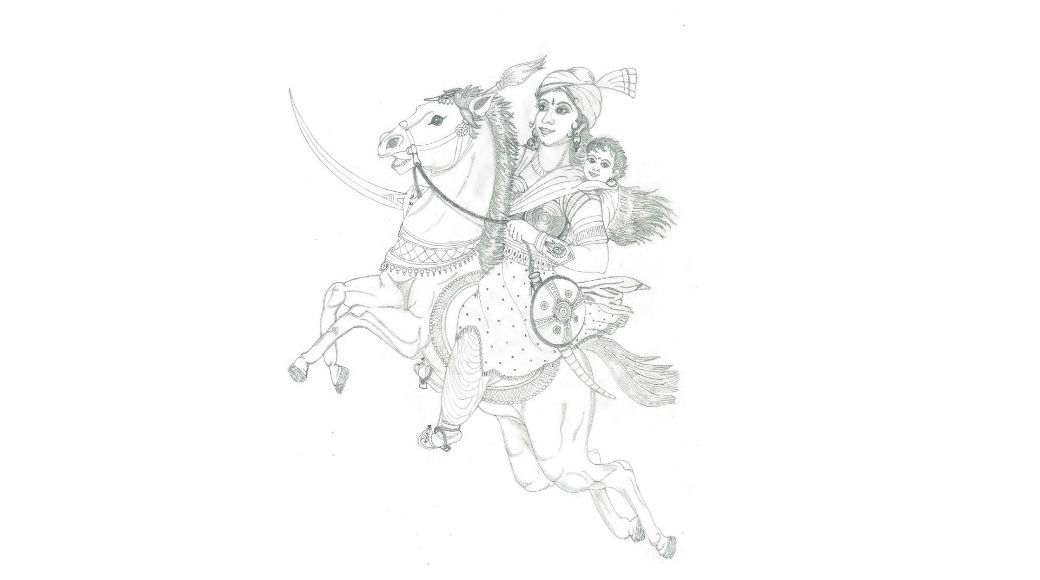 In honor of Women’s History Month, we present 31 Days of Revolutionary Women: a series of daily essays documenting, honoring and celebrating the women who inspire us in South Seattle and beyond.

The Rani of Jhansi was one of many leaders of the Indian Rebellion of 1857, almost 100 years before Indian “Independence” from the British Colonizers in 1947. She was the only female leader of the Rebellion.

Born as Manikarnika to an officer of the court, she lost her mother when she was four years old. Her education at home was not traditional for women at that time; it included self-defense, horsemanship, shooting and archery all of which served her later when she led a small and mighty army to fight against the British. At the age of 7, she was betrothed to the Gangadhar Rao, Raja (king) of Jhansi and renamed Lakshmibai. At the age of 18, she went to live with him and became the Rani (queen) of Jhansi.

Her marriage only lasted about 2 years before the king died. First, she gave birth to a son who died tragically at 4 months. Later, just before the king died, they officially adopted a son (later known as Damodar Rao) with witness from a British officer and written instructions to treat this son as the heir to the kingdom. However, the East India Company enacted a Doctrine of Lapse, a policy stating that any state/territory would automatically be annexed if the ruler was either “manifestly incompetent or died without a male heir.” Despite witness and testament, they did not recognize the adoptive son as a rightful heir.

In 1854, East India Company granted her an annual pension of 60,000 rupees and ordered her to leave the fort of Jhansi. She refused. The East India Company’s rule included land rights being stolen, excessive taxation, violence against women and the poor, courts undeniably favoring British officers, implementing and enforcing systems that are unfamiliar to the locals…you know, much of what we understand colonization to look like!

Being a small territory, the Kingdom of Jhansi was under the radar for a few years as the uprising began and British forces’ attention was focused elsewhere. During this time, she strengthened defenses, trained a volunteer army which included women warriors, and rallied support from neighboring small territories to form a rebellion army of 14,000 people.

In 1857, the Indian Rebellion officially began. After almost 100 years of a regime taking away their power, the ‘last straw’ was the issue of new gunpowder cartridges for the Enfield rifle. British officers insisted that the new cartridges be used by Indian soldiers, but the cartridges were made from cow and pig fat. Loading the Enfield required tearing open the greased cartridge with one’s teeth, which insulted both Hindu and Muslim religious practices. Pockets of states in North and Central India (and a couple in the South) began to aim fire at British officers, leading to all-out war.

It wasn’t until March 1858 when the British arrived to attack Jhansi. The people of Jhansi and their fearless queen decided to fight back and held on for 2 weeks. Rebel leader Tatya Tope arrived with 20,000 more warriors to support Jhansi’s army and its people. But 3 days later, the forces could not hold out against the British and the annexation of Jhansi was official.

Rani Lakshmibai still did not give up. By June of 1858 when the British arrived at  Fort Gwailor, it is said she put on a warrior’s uniform, wrapped her son around her back, wielded a sword and fought until she was killed in battle. It is also said that she didn’t want the British to have her body so she asked to be cremated immediately. In the report of the battle for Gwailor, General Rose of the British forces said that this Rani, “remarkable for her beauty, cleverness and perseverance” was also “the most dangerous of all the rebel leaders.”

Growing up in the US, I didn’t hear about the Rani of Jhansi until I was at a community event debating (he might call it arguing?) with an elder man about what constitutes domestic violence, beyond physical violence. I heard him mutter under his breath “Jhansi ki Rani” as he looked at me with a scowl on his face. I could tell he thought I was disrespectful and impetuous.

After some research, I decided it was a compliment; I was accused of being a fierce queen warrior, who joined a rebellion against oppressors, fighting for the rights of her adopted child, and dying in service of her people. I couldn’t wait to hear someone accuse me of this again. 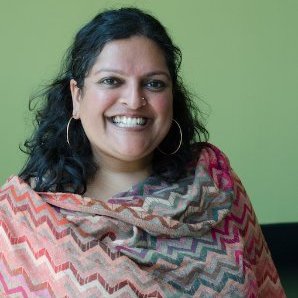 Uma Rao is a South Asian American, who is proud to call South Seattle her home and folks in the nonprofit sector her colleagues. She’s an east coast raised, dog-obsessed, lover of french fries. And a feminist.

Featured image is the original work of Nikila Iyer

One thought on “31 Days of Revolutionary Women: #3 Rani of Jhansi”