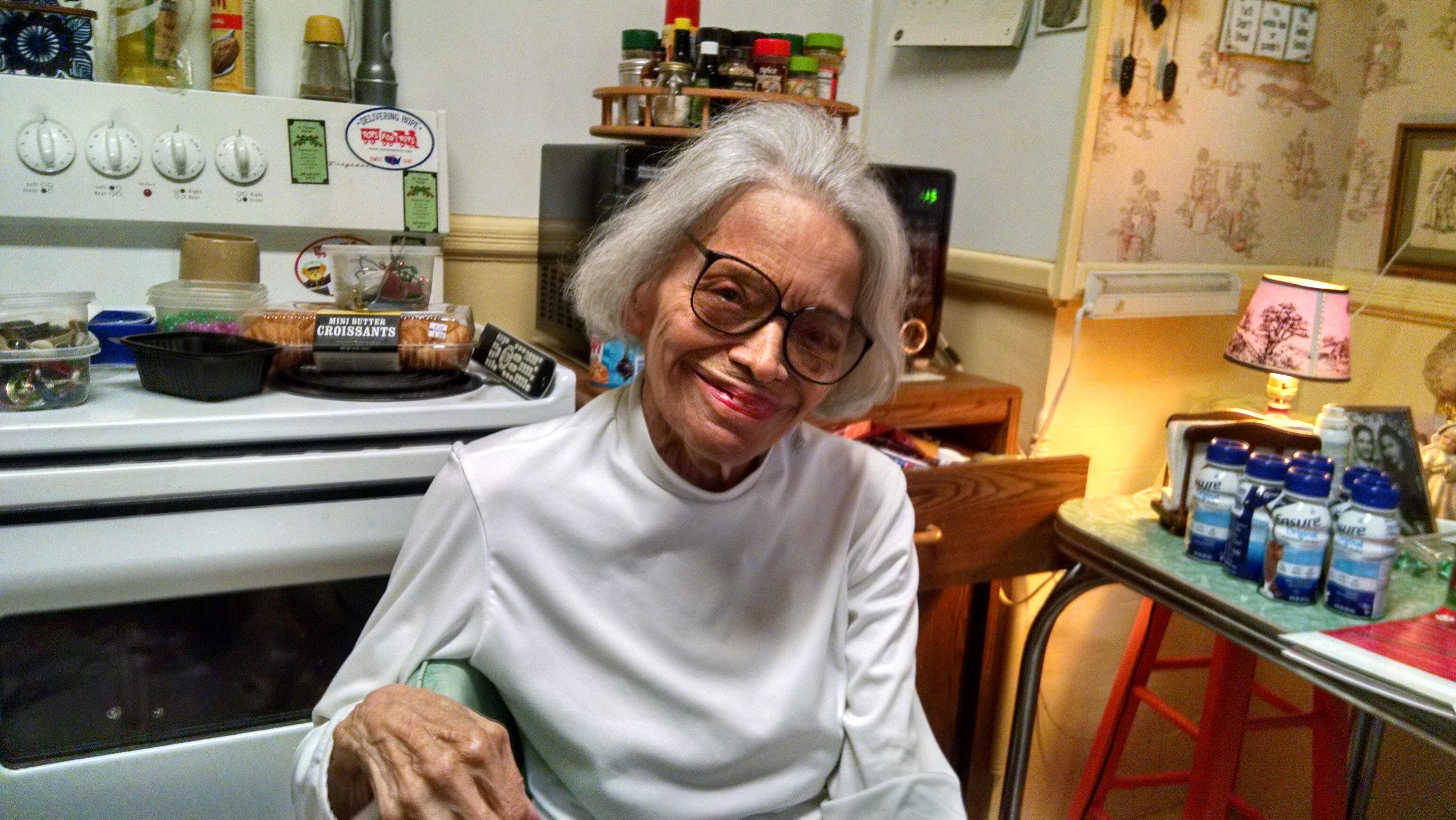 This week’s articles come from organizers of the Celebration of International Women’s Day* event, a day-long, free event designed to rejoice in the strength, resilience and creativity of women in the Seattle area.  See the event page for information about attending.

Annabella’s story, punctuated with song and cursing, is in many ways our region’s story. Born and raised in New Orleans, she was a “colored” teenager through the Great Depression, moved to Seattle, WA, worked as a riveter for Boeing during World War II, married “a good man” who would become one of Seattle’s first Black pharmacists, cooked gumbo dinners for the St. Therese auction, celebrated Obama and now curses Trump.

Annabella’s mother, Olivia Melonson Miller, raised her eight kids with a switch and a strong Catholic faith. Her father, Harry Miller, was a bricklayer and a gambler who was often away from home.

Both of Annabella’s parents were mixed race: her mother was Creole, Cherokee Indian, and Black, and her father was probably Irish, Creole and Black. Her father was descended from slaves on an Irish man’s plantation, which explains Harry’s surname and most likely why two of Annabella’s sisters had red hair and freckles.

Some men from the circus came and wanted to put the two with red hair in the circus, but Annabella’s mom cursed at them and said, “You put your own damn kids in the circus!” She was tough, and she held her family together.

The family would have “entertainment nights,” when the sisters would sing for their mother. Annabella had a beautiful voice and she still often bursts into song.

They lived in a white couple’s home and fed their backyard alligators. “We’d reach our arms down their throats, and they never bit us. They knew where their next meal was coming from,” Annabella remembered. As a teenager, Annabella worked as a French maid for another white family, and they gave Annabella clothes, so she always looked good.

“I was scared to death.”

Annabella was on the train to join her fiancé, Brad, in Seattle when the United States entered World War II. In Seattle, she worked as a bucker and a riveter at Boeing. She said she was the strongest bucker, so they made her a riveter. At first, she made 99 cents a day which, she said, was a lot, but ultimately she got a raise to $1.29 per day. She loved the work and the money.

When the war ended, she left Boeing and, in later years, she worked as a cashier in the store where Brad was a pharmacist. In 1948, with two young daughters, Annabella and Brad bought the home at the border of Leschi and the Central District where Annabella still lives. When they purchased their home, the neighborhood was Jewish, but with redlining it became Black; and it’s now increasingly white.

“She’s like that Frank Sinatra song: ‘I did it my way.’” – Saundra Morgan

Though Brad didn’t grow up Catholic, he converted so Annabella would marry him. They raised their daughters at St. Therese, taking them to church as well as sending them to the school.

In order to pay for the private school as well as their $7000 home, Annabella and Brad took mops and pails on the Yesler bus to clean the tall buildings, including Smith Tower. They also sponsored poker games at their home.

For decades, Annabella also contributed a gumbo dinner for 16 people to the church auction, which one year sold for $5000.  For these dinners, Annabella cooked gumbo and jambalaya and for dessert made bread pudding and several pies. Afterward, everyone got a “lagniappe,” a little extra, like a role of paper towels or rubber gloves.

Annabella explained how she, “an older, colored, Catholic woman,” could embrace my partner and me, lesbians. “I love the pope,” she said, and began tapping her temple with her index finger, “but I have my own mind.”

She loves people, and they love her. For the past few years, she’s exercised at the Meredith Mathews YMCA in a class with elders who exercise in chairs. Class members help her and “kiss on” her. They love her sense of style, her polka-dotted sneakers and striped socks, her #3 Seahawks jersey and her #12 earrings. Margaret Lyles, a friend in the class, said, “She is a jewel.”

Annabella’s had a good life, but she’s also experienced losses. Many in her family died from diabetes, her husband Brad died of pancreatic cancer, and she’s lost “100 friends.”

She’s seldom sentimental about these losses. After visiting a friend with Alzheimer’s years ago, she said, “She didn’t know her butt from a shotgun.” Then she laughed her cannonball laugh, raised her glass of beer and tomato juice, and toasted, “Here’s to those of us who are left.”

Throughout Obama’s presidency, Annabella celebrated having a Black man in the White House, but she worried he would get shot. Two decades ago, before I knew about police brutality, the War on Drugs’ impact on the Black community, or other manifestations of the new Jim Crow, Annabella told me and a group of white friends that life had not improved for Black people since the Civil Rights Movement. She was schooling me, and I was shocked. Now we both worry about Donald Trump, whom she calls “that stupid man.”

Annabella’s still feisty. She still has her own mind. In this new presidency, her longevity, her spirit, and all she’s been through give me hope. If Annabella’s my friend, I must be okay. She’s gotten through some tough times with a strong sense of who she is and how she can serve in an imperfect country, and so will I.

Mary Edwards has been Annabella’s neighbor and friend for over twenty years. For 27 years, she worked in high schools, first as a Language Arts teacher and then as a Literacy Specialist. She experienced disabilities after brain tumors in 2007 and 2010, and has since found she has much in common with elders and others who struggle. In December 2016, she completed a Master of Social Work at the University of Washington, and she now volunteers, sharing reading and writing, and blogs at www.cantduckit.blogspot.com