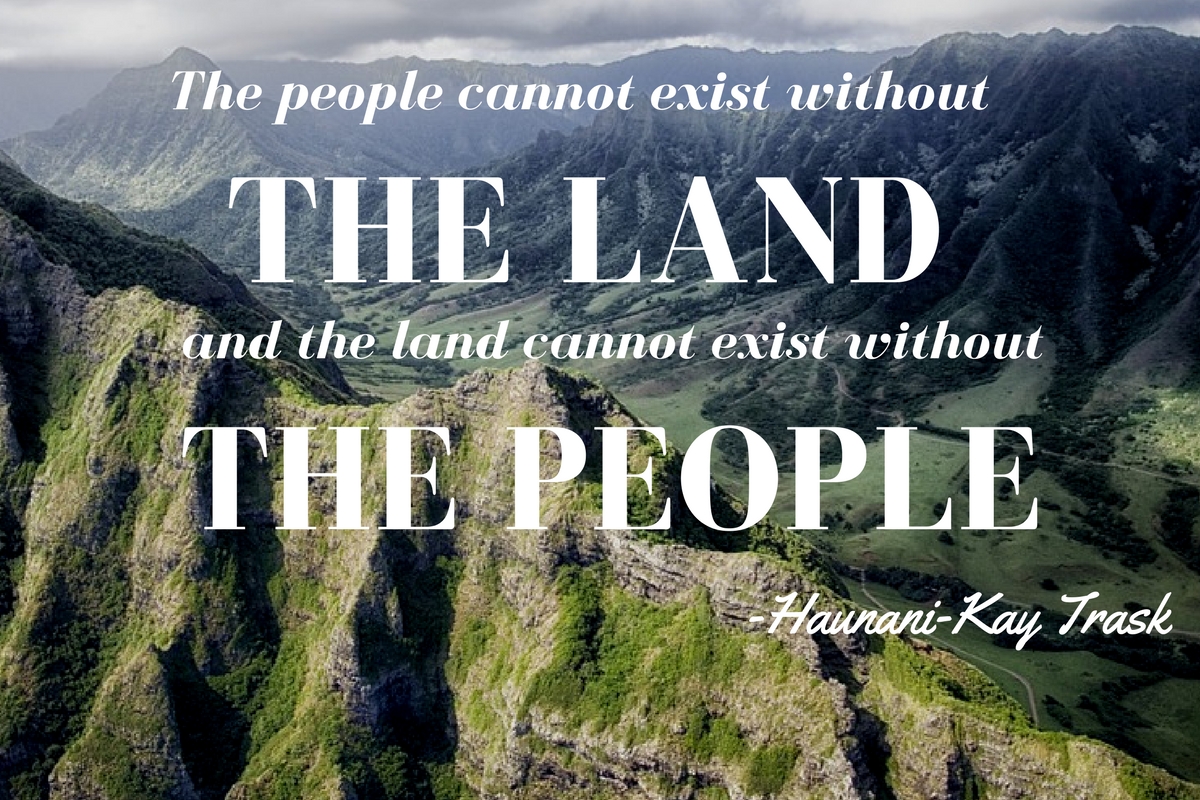 Dr. Haunani-Kay Trask, decolonized and politicized my mind and knowledge of Hawaiian history.  I am so grateful that I was introduced to her powerful, political, poetic prose in Indigenous Feminisms course at the University of Washington taught by Dr. Luana Ross. Haunani-Kay Trask’s writing was the first academic writing I read that represented my story and referenced my beloved Guahan (Guam). Her fierce words blessed me when I needed to heal and reclaim my indigenous existence as a Chamoru mother, writer, artist and Pacific Islander womxn.

Our story remains unwritten. It rests within the culture, which is inseparable from the land.  To know this is to know our history. To write this is to write of the land and the people who are born from her.

—Haunani-Kay Trask, From A Native Daughter

Haunani-Kay Trask is a Native Hawaiian political warrior, indigenous rights advocate, poet, writer and scholar. She is known for her revolutionary, unapologetic activism that played a critical role in mobilizing and politicizing Native Hawaiian consciousness in the Hawaiian sovereignty movement. She fought fearlessly for the liberation of Hawai’i, with her razor sharp analysis and determination, denouncing U.S. imperialism, tourism, colonization, militarization and occupation of her native land!

“She [Trask] does not simply write with a pen, she slashes with it” – Scholar Witi Ihimaera

Trask weaponized her writing as a political instrument to raise Native Hawaiian consciousness towards liberation. She wrote fiercely, authoring “From a Native Daughter: Colonialism and Sovereignty in Hawai’i”— an infamous collection of essays on Hawaiian Independence Movement, as well as poetry books: “Night Is a Sharkskin Drum,” “Light in the Crevice Never Seen.” She also produced an award-winning film “Act of War: The Overthrow of the Hawaiian Nation.” Trask believes poetry is a force that one “…can use everyday statements for political analysis. A metaphor can be more political than a declarative statement because it gets to the heart of the feeling, and a metaphor says many things in a small moment.” She used art as a form of resistance!

‘What drives independence in all of us today, is resistance! To resist what they are doing to our islands and to us.”

Trask was called by her mother to become a leader in the Hawaiian Nationalist movement. And she led with brilliant resistance, resilience and power! She and her sister Mililani, were fueled with anger that Hawaiians were constantly left out of decisions due to the dominance of Asian settler colonialism. During this resurgence and reclamation of Hawaiian self-determination, she demanded that Native Hawaiian people must move from being a cultural people to a political people. “Our culture has to be the core of our resistance, the core of our anger, the core of our mana! That’s what culture is for!” She reminded Native Hawaiians that as cultural people they too have to become political! Trask also participated in many protests and grassroots efforts to protect sacred land from desecration, reminding those occupying Hawai’i that the island rightfully belongs to the Hawaiian people.

“I break the ideology of happy natives and that makes me dangerous.”

Trask is an emeritus professor in Hawaiian Studies at the University of Hawai’i at Manoa.  Trask fought defiantly to be respected throughout her academic career as a Native Hawaiian Professor, despite facing continued racism. The university’s Philosophy department demanded that the administration remove Trask as Director of the Center for Hawaiian Studies when she responded to a white student’s newspaper column telling him, “Haole, go home!” Haole—meaning white foreigner, is “one of the few surviving Hawaiian language descriptions in common use in Hawai’i.” When free speech controversy erupted, she was supported by over 300 students, faculty, and community people in protest of the department’s demand.  Trask modeled true defiance and defines her hostility to white educational colonialism, imperialism and white supremacy, as “a smart political sense of survival.”

“We are not American! We will die as Hawaiians! We will never be Americans!”

Trask inspires me to continue protecting indigenous land and claiming my indigenous Chamoru identity. Her leadership reminds me that as a mother, I must teach my child that U.S. colonization and occupation of Hawai’i is linked to Guahan’s scarred soil which demands indigenous resistance!

Trask has inspired me to release the fire in my belly, by unapologetically sharing my truth to power! She inspires me to be sharp with my tongue, to be bold in my language, culture and traditions and to politicize myself to resist colonial rule. She reminds me to be fierce, to be angry, and to use that energy to interrupt racism and white supremacy.

As the child of the Pacific Island diaspora, and now in South Seattle, as a Chamoru mother and womxn, I know it’s my responsibility to continue building Pacific Islander and indigenous solidarity across our oceans, in Seattle and beyond! We must reclaim our cultures, we must politicize and decolonize our minds and heal our communities with urgency!

As Haunani Kay Trask reminds us— “We are ocean people….we are all comrades ….everyone now who is native, is fighting back and it’s an insurgency….The whole ocean area needs to be liberated!” 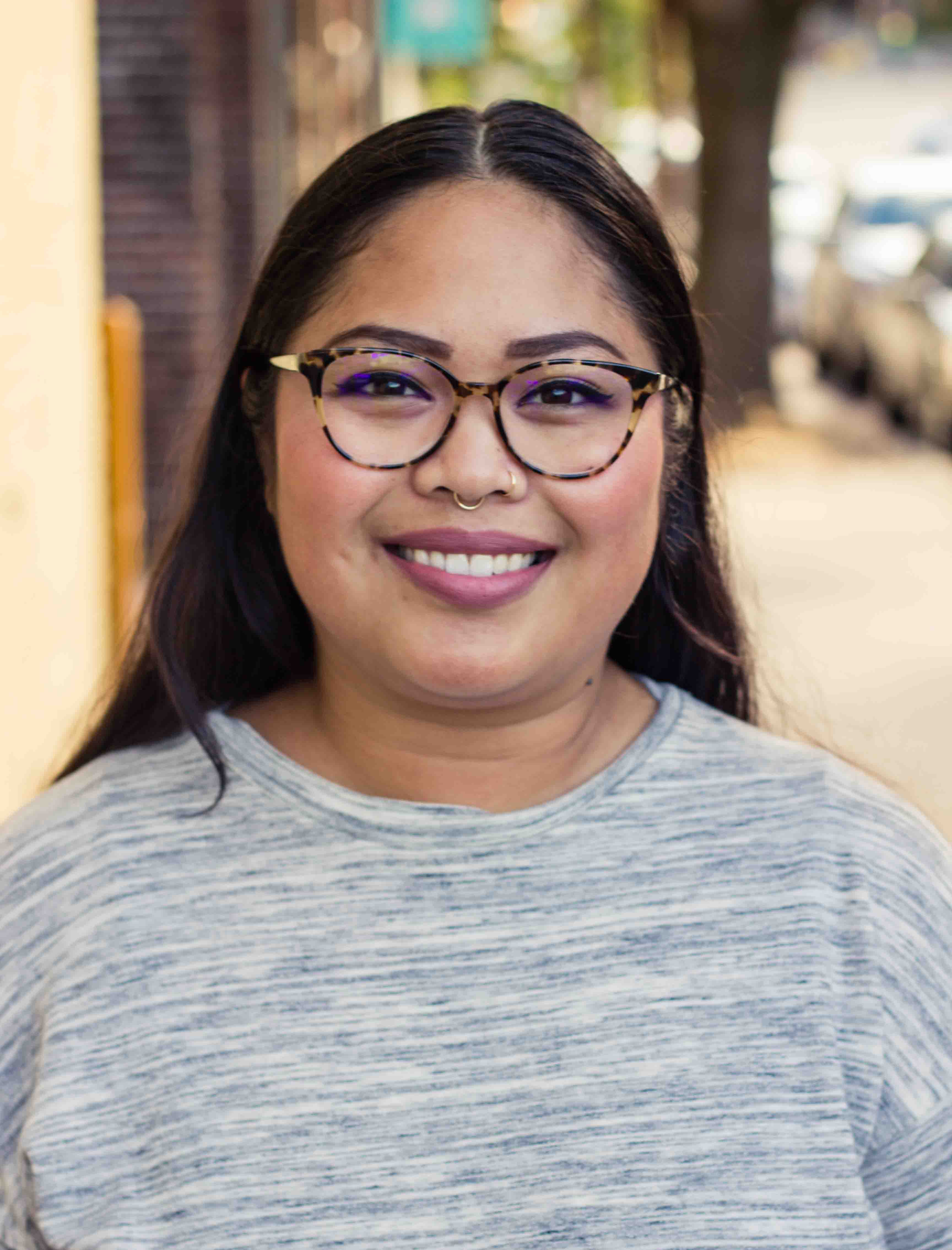 Selena Velasco is a Chamoru mother, artist, poet, activist and queer tender loving Virgo. Selena uses her art to decolonize and heal by honoring her ancestors’ through poetry, collage and visual art. She is also a Rainier Valley Corps Fellow and Director of Programs at Families Of Color Seattle. She is dedicated to organizing with the Pacific Islander Health Board of Washington, Womxn of Color and Families Contingent and as a Natural Helper with API Chaya.