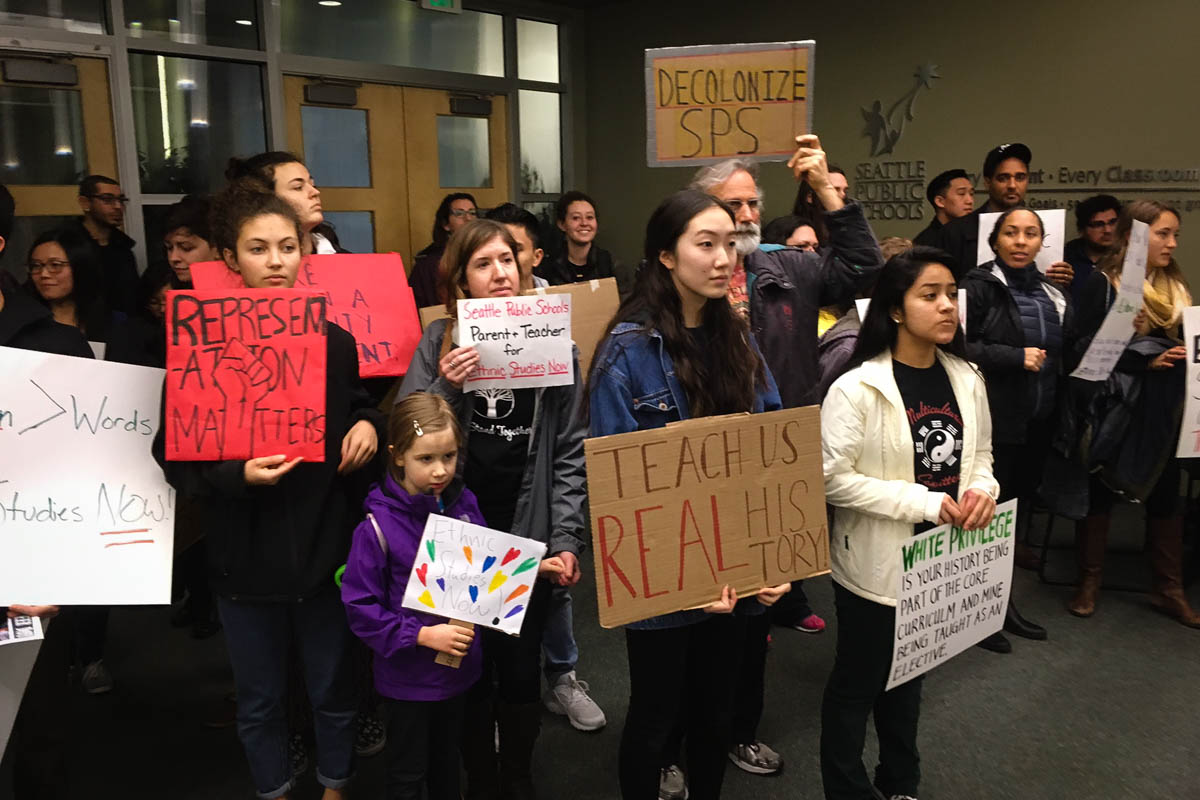 Sukino Keo, a student at Rainier Beach High School, laid out the need for K-12 Ethnic Studies to the board of the Seattle Public Schools.

“As a school with students of color majority it is important that we see ourselves represented in the materials we learn,” Keo said. “When the only history available for us to learn is of the European and white focuses, we are being told that the histories of our own people do not matter as much.”

Keo was one of more than 50 students, parents, and teachers to advocate for Ethnic Studies becoming a mandatory part of Seattle’s K-12 curriculum.

The idea was brought forth by King County NAACP, which released a proposal on MLK Day that invited the Seattle School Board to consider making Ethnic Studies a mandatory part of curriculum by 2020. The School Board has yet to formulate an official response.

Former school board member Marty McLaren, who also was a K-12 educator, expressed her full support for the proposal, which has already been adopted in Portland Public Schools.

This shift would mean not only a change for curriculum for K-12 educators, McLaren said, but also for universities preparing new teachers and also current teacher’s professional development.

“The courageous educators who already teach Ethnic Studies in Seattle can vouch for the challenge of creating a safe space for all students,” McLaren said.  “It can be both traumatic and cathartic for students of color. It has its own kind of pain for students who live with white privilege.”

If Seattle Public Schools choose to do nothing, nothing will change. Based on the reflections of their current students and alumni, it seems a change is overdue.

“As an Asian American student looking back on my 12 years in the Seattle Public School system, I have realized that I know very little about Asians in America or the rest of the world history,” said Keo.

Her perspective was echoed by Meili Powell, an American Ethnic Studies major at the University of Washington.

“Reflecting back on my Eurocentric education, I never felt engaged and thought it was normal not to see myself in curriculum. It wasn’t until I was exposed to Ethnic studies at UW that I connected with my identity as a Chinese American Woman and realized it wasn’t my fault for disliking history, but rather a school system that wasn’t validating people of color.”

Jesse Hagopian, a history teacher at Garfield High School took it a step further citing the whitewashed school curriculum as a contributing factor to the school to prison pipeline.

“I think that what we need to understand is that the curriculum is a huge part of that pipeline because when kids check out or the aren’t paying attention in class or they act out, they get pushed out of the classroom and labeled defiant,” said Hagopian.

Several people brought up the statistics about black youth being disproportionately disciplined compared to their white peers for the same infractions. While the numbers are several years old, the situation has not changed.

“It’s a cry for being included and being heard,” said Hagopian. He said with a political climate that contributes to hate crimes against people of color, it is even more important for schools to create spaces where all students feel safe and included.

“It is urgent more than ever that we stand as sites of resistance here in Seattle and at every one of our schools as a way to combat hate crimes,” said Hagopian.

Asking for a seat

As they gathered in the hallway waiting for their turn to speak, Hagopian led the crowd in a chant of “Ethnic Studies Now!” A school board official asked the group to be quiet so the meeting could continue uninterrupted.

In the respectful silence I couldn’t help but think that even in 2017 we are still politely asking for a seat at the table. Our young people are saying they feel deprioritized and marginalized by the very institution and curriculum meant to educate them — and the response is a Seattle polite smile that says we feel you, but what you’re asking for might be too inconvenient.

It is a systemic issue, not limited to the issue of curriculum. Saido Nor, a student from Rainier Beach High School, also addressed the school board on the issue of the lack of renovations at her school — where 49 percent of the students are black, 26 percent are Asian American and 14 percent are Latino.

“We’ve constantly been pushed to the bottom of your priorities list,” she said. “You are stopping us from reaching our full potential. That needs to stop now.”

“It’s a system breakdown that we have such a predominantly white teaching force because that will always insulate them from the urgency of racism,” said Jon Greenberg, a teacher at the Center School, told me. “Here we have a clear concrete strategy that is research-based, what are they waiting for?”

Greenberg is part of the Equity and Race Advisory Committee that in theory advises the superintendent. The committee recommended the adoption of Ethnic Studies last May. The school board is set to make a statement of support next month.

“Eleven months to write a sentence?” Greenberg said.“They need to be pushed. And so that’s what today is about to push them to advance that time table. It is unacceptable. We are in a state of emergency, but they don’t act like that.”

Doug Edelstein, a history teacher at Nathan Hale sardonically told the school board about the existing ethnic studies program in the United States.

Edelstein went on to state the obvious — that we do not have is a comparable study for all the other people, all the 60 or 70 ethnicities that face us in the Seattle public schools.

Supporters are gathering signatures for a petition to back the adoption of Ethnic Studies in Seattle Public Schools.

Correction: due to an editing error, the original version of this story incorrectly identified Marty McLaren’s position.