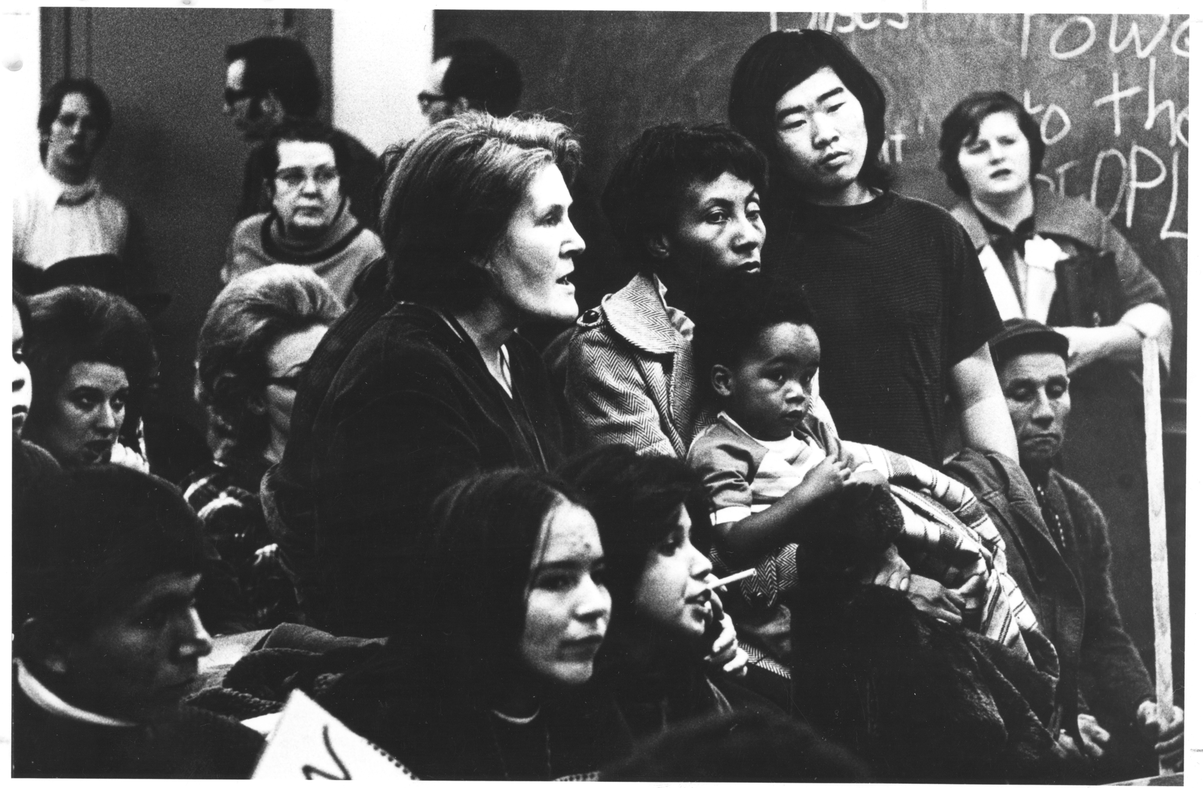 When I first met Gloria Martin in 1972, I was a 17-year-old high school student. My friends and I had been searching for a way to connect with the tide of feminist, antiwar and civil rights activism all around us. After trying out different groups and activities we came across Radical Women. It was love at first sight!

This was the period of the youth movement and a miles-wide generation gap. Our parents had brought us McCarthyism, the Vietnam War, the A-bomb, and stifling conformity. Youth were demanding freedom, rights, responsibility and respect as adults.

“Don’t trust anyone over 30” was the mantra. Yet Radical Women had esteemed women leaders who were 50 and older!— Gloria Martin, Clara Fraser, and Melba Windoffer. I was amazed to find the most radical ideas I’d ever heard coming out of the mouths of lifelong women revolutionaries who were older than my parents, but working collaboratively with young feminists and helping them develop as thinkers, writers and organizers.

Gloria had a feisty, no-holds-barred style. In a 1978 essay she wrote, “Socialist feminism – right on! I believe in the revolutionary potential and talent of working women, militant women of color, lesbian radicals, discriminated-against women professionals, angry young women, rebellious housewives, harassed welfare mothers, and wise elderly women.” (“Where Matters Stand With Me,” http://www.socialism.com/drupal-6.8/introductory-writings?q=node/212 )

In addition to being an activist, Gloria was a working mother of eight children, whom she raised in South Seattle. She was a bit of a beatnik, given to wearing berets and organizing the world from an assortment of paper bags. She loved cats and pork chops, Wonder Bread and really bad coffee. She ended many a speech waving a red scarf—long live the revolution! Though she never finished high school, going to work at 14 to support her family, she treasured poets, writers, artists, and rare books. Late in life, she managed the Shakespeare and Co. bookstore in the Pike Place Market.

As a young woman, Gloria had been part of Communist-led desegregation actions in St. Louis, Missouri. When she arrived in Seattle in 1950, she worked with the civil rights organizations CORE and NAACP. In 1966, she joined forces with militant Black women, including Mary Louise Williams, to organize welfare recipients into the Aid to Dependent Children Motivated Mothers project launched by the Central Area Motivation Program (CAMP). She later worked on other antipoverty programs and organized a union of poverty-program workers.

After years in the trenches fighting for change for working and poor women and women of color, Martin was more than ready for the new wave of feminism when it began to gather momentum in the 1960s. She forged practical and theoretical links between female Marxists and women of the New Left by initiating a popular 1966 workshop series called “Women in Society” at Seattle’s alternative Free University. Writing later about those classes, she recalled: “It was pure joy to hear women describing and evaluating their lives; most of us had never really known we had a history… Our dialogue with each other burst out in a great liberating chorus… We would fight and lead and struggle. Rising up we would push everyone up with us as we went…”

From 1968 to 1970, Martin was a key player in the multiracial, statewide mobilization of low-income women that resulted in the legalization of abortion in Washington State three years before Roe v. Wade.

The Black Panthers loved Gloria. A leader of the Seattle Black Panthers, Elmer Dixon, has frequently told how Gloria was one their heavyweight allies. And how this steely-eyed little white woman was the first to show up and bring other defenders when the Panther headquarters was threatened with assault by the police.

In the early 1970s, Gloria was a main leader of Seize the Time for Oppressed People – known as STOP— an anti-police brutality coalition. STOP fought for an independent, elected, civilian review board over police as the best way to bring them under control of the community. This groundbreaking coalition united people of color and the LGBTQ community and brought down Seattle’s police chief. Gloria had a deep affinity for the gay movement, starting with compassion for her adoptive father, a closeted gay man, who suffered a nervous breakdown and was institutionalized for a time due to the homophobia he experienced.

In 1990, at age 74, Martin was elected organizer of Radical Women’s Seattle branch. By this time, Radical Women and the Freedom Socialist Party had moved into their current home at New Freeway Hall in Columbia City.

Interviewed by the Seattle Times on the occasion of her inauguration as RW helmswoman, Martin was quoted as saying, “We have to fight for survival issues–better pay, benefits, abortion rights, child care. But then we have to go further. We have to change the system, because as long as the system is the same, we’ll be fighting all our lives for the same thing….When people have had enough, revolution can happen suddenly.”

Martin died in 1995 in Seattle at age 79. Accounts of many of the organizing campaigns she took part in that shaped Seattle’s political scene can be found in her book, Socialist Feminism: The First Decade 1966-76. http://redletterpress.org/firstdecade.html

Having now become a gray-haired revolutionary myself, I only hope that I can do half as much to help new generations of feminist radicals find their own way forward. Gloria’s legacy lives on!

Helen Gilbert has been living in the revolutionary fast lane ever since meeting Gloria Martin, Radical Women and the Freedom Socialist Party. She is the Managing Editor of Red Letter Press.