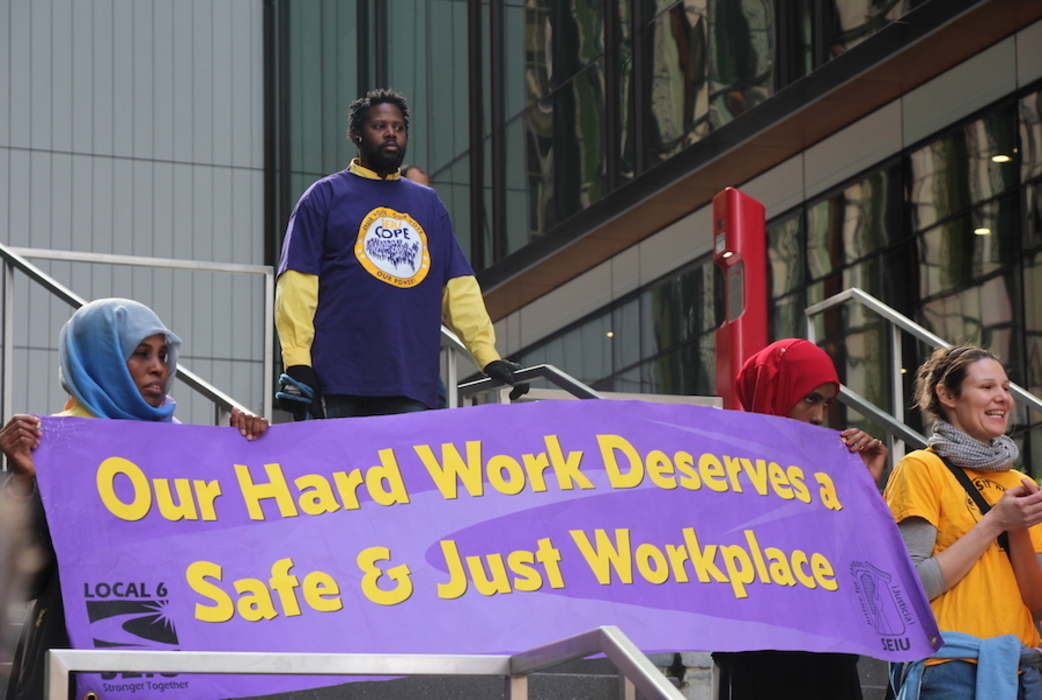 Not only did Amazon actively decide during a second protest to not meet with Security Industry Specialists (SIS) workers — subcontracted by Amazon — but the company also hasn’t made or asked for any changes since the first protest.

Security Industry Specialists (SIS), based in California, was hired by Amazon to provide security services for its sprawling campus. While Amazon has provided prayer rooms for its high-level Muslim employees, others working at lower-wage jobs for SIS have no access to those rooms. The workers want Amazon to give SIS workers access to those rooms, and they want Amazon to put its foot down and stop what they claim as SIS’s discriminatory practices.

While workers and friends marched outside of Amazon headquarters, a select few were already inside, hoping to deliver a petition of more than a thousand signatures to Amazon CEO Jeff Bezos, and talk some things out.

Essag Hassan — present at the last protest — says he’s experienced religious discrimination, and a threat to his job because of his stance against the mistreatment. When he was put on unpaid leave, he and his then pregnant wife experienced so much stress she miscarried their unborn child.

“SIS thinks this is over,” he said. “It’s not over … Stop being scared and come forward.”

Hassan explained that an SIS worker speaking out often results in a 21-day removal from the work schedule, which can then lead to them being fired after their suspension is over.

“We’re trying to make sure that doesn’t happen to anyone else,” he said.

Unlike Hassan, Eden Medhane, another SIS worker, began her employment just after the first protest. Nonetheless, she decided to join those who marched up to Amazon CEO Jeff Bezos’s office demanding to speak directly to either the tech-billionaire or a representative.

SIS’s intimidation tactics were evident as the protesters made their way through the building. SIS worker supervisors, operating managers, bosses of bosses were waiting in the lobby, watching the demonstrators every move. Workers spent the entirety of this time unsuccessfully waiting to see if Bezos’s or a spokesperson would address them, meanwhile detached SIS higher-ups remained 30 feet away.

“The whole building knows we were there, but no executives,” Medhane said.

The small group then approached the lobby receptionist, who said she would track down someone willing to talk. After waiting fifteen minutes, the group again asked to speak with someone after a new receptionist replaced the previous one.

“They made it seem like a bad idea,” Medhane said of the receptionists. “It seemed like they weren’t taking us seriously. They looked at us like ‘do you understand what you’re asking?’ We work for [Bezos], and give him everything he has, so I think we deserve five minutes of his time.”

Both SEIU and the SIS workers were attempting to make sure their petition got into the right hands. They waited a total of thirty minutes, but to no avail.

“I felt disrespected by the receptionists,” Medhane said. “If even the receptionist won’t take us seriously, how are we supposed to have upward mobility and talk to the executives?”

She hoped the protest stressed the need for uniformity in SIS’s  rules even for subcontractors, a necessary emphasis because she says there is currently a lot of favoritism at the company.

Najma Harreed also works at SIS for Amazon and said SIS talks down to specialists “like they’re children,” and forces workers to adhere to an arbitrary, and unwanted, hierarchy.

According to her, specialists’ work is then nitpicked to death.

Kenneth Ferguson with ABM, a janitorial service, discussed that people don’t realize how much they need protection, which can happen through insurance and unions.

“In my opinion, if you’re not in the union, you’re not going to get anything,” he said. “The company is taking advantage of people from other countries. And they’re afraid to speak up. They don’t want to get into the union because they’re afraid they’ll get fired. They’re doing what [SIS] want them to do. Some don’t know what a union is…all they know is they got a job and can bring money home to their family. The companies know that.”