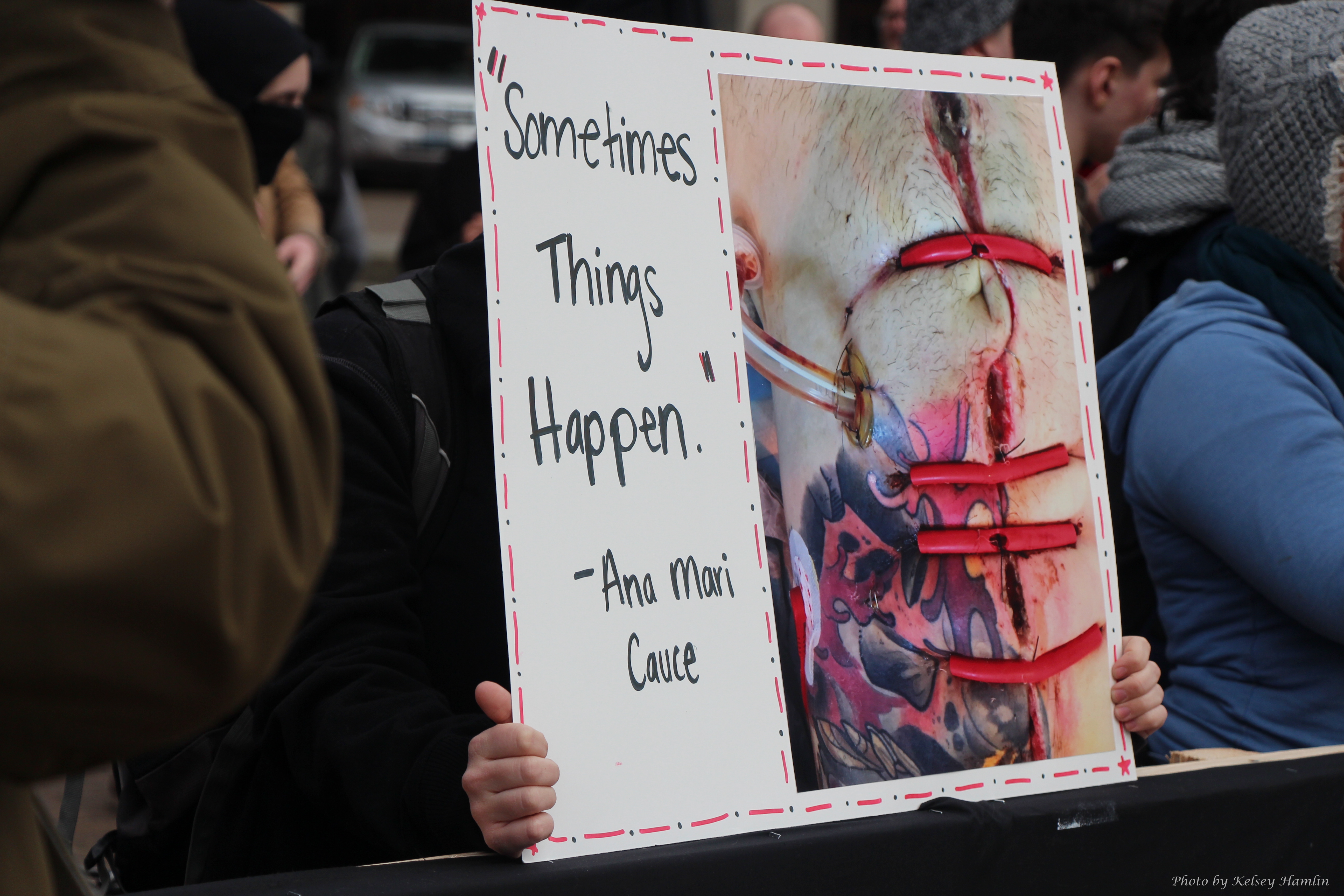 When it comes to America’s legal system, it has a rather interesting history: Going from grotesque but nonetheless visible executions to traumatic and invisible navigation and punishment. Nearly everything about the judicial and legal system takes place outside of the public eye: legal financial obligations, sentencing, figuring out where to go and what time and if it’s even possible to make it to court while working and with kids, attempting to get an often unaffordable or otherwise overworked lawyer, reliving traumatic events for testimony, the list goes on.

Long story short, everyday systemic violence is often hidden. Partly due to the way the system is set up, the public rarely pauses and comprehends the ramifications of a single gunshot. In the case of the man shot at the University of Washington’s Red Square last January, there’s been limited reflection on the trauma endured by him, his friends, and his family.

“I’ve had a huge amount of community support, and support from friends and family, but there also has been a huge burden,” explained the victim’s partner, Sasha, who requested their last name not be printed. “He was shot. It was a decision that someone made. A tiny, split-second decision that’s had so much consequence.”

The victim spent months in the hospital. His stomach was cut open, tubes protruded from him, a ventilator was attached to him, and he had an infected abdominal muscle removed.

“For me, to watch the person you love most in the world suffer…and not know if they’re going to live, like, that’s something I have to carry. And that shouldn’t have to be my burden,” Sasha said.

“I’m not the one who did that harm. SPD, UWPD, the administration, they’re the ones that need to see that. I’m tired of carrying this by myself. I want people to see. I want them to see what right-wing violence looks like. I want the College Republicans to see what happens at their event that they insisted upon having.”

The University of Washington’s College Republicans is a registered student organization. They planned to invite Milo Yiannopoulos to their university on Jan. 20 months before the election, thinking presidential candidate Hillary Clinton would win. It was meant to stir the pot, one they felt was too seasoned with democratic political correctness.  Then someone who wanted to see Yiannopoulos speak — Elizabeth Hokoana — brought her gun to the UW campus on Jan. 20 with a concealed carry permit.

In fact, the victim did nearly die. His organs were damaged, and he experienced severe intestinal bleeding.

“I think him getting shot is too abstract right now, to the shooters, to the College Republicans, to Ana Mari [the UW’s president],” Sasha expressed. “It was the most terrible thing that happened to me in my life. And they need to go see what it actually means when you shoot someone. A gunshot wound is not this simple thing. They had to slice his whole abdomen open … Bodies are complicated and gross, and a gunshot wound to the abdomen is not simple; it’s not clean; it’s not pretty.”

While there was originally speculation that the victim was armed with a large knife and brass knuckles, the victim told the Guardian he was actually only carrying a plastic finger strengthener used by guitarists. Additionally, UWPD has never confirmed any weapons on the victim.

In an effort to place all of this in the fore of the public eye, a group of anti-fascists put together a protest March 31 that began on the UW’s Red Square, walked through the quad, passed the HUB, and returned to its starting point. The march was planned to take place during a time in which tourists would be strolling around campus because of the cherry blossoms.

“If I get to make some noise and show some graphic pictures and share a little bit of that burden, I think [the protest] was positive,” Sasha said.

The protest, however, which started with approximately 50 people of all ages, was largely — if not completely — comprised of white faces. A hyper-local activist had expressed before the protest that she had handed over contact information of organizers of color to the antifascist organizers but believed none were contacted.

The primary General Defense Committee (GDC) organizer said he reached out to student organizations and notified Students United for Palestine Equal Rights, UW Resist, Seattle Black Book Club, and others. But it was difficult to maintain awareness, he said, because it was put together near the end of UW’s last quarter, during “dead week,” finals, and then spring break.

“We don’t want to be a third party coming onto campus and disrespecting their concerns,” the organizer said.

A familiar face was present during the protest, however: Kyle Broussard. Broussard consistently shows up at protests on campus to record people, allowing them to be identified on websites later. Activists and the UW community tend to recognize and label him as a known neo-nazi, though he rejects that label.

While recording protesters outside the Husky Union Building (HUB), someone in the antifascist group slapped Broussard’s phone to the ground and stepped on it, cracking the screen protector. I watched Broussard simply walk away, however, still recording. Then the back of the antifascists crowd shifted to advance toward him, yelling. Police stepped in between, and yelled: “get back!” They then began pushing the entire crowd toward the face of the HUB. I was in the middle of this, and watched two people fall to the ground because of the police’s jostling, and where they remained underfoot an upset crowd for at least a minute.

Police then appeared ready to arrest someone they pulled into the HUB, but they released the person after approximately five minutes.

“We are committed to learning from the mistake of history,” Bob, a CDG member, said earlier, “confronting the fascists as soon as they arrive.”

Among the two pushed to the ground was Michael Weatherford. He experienced doxing and harassment as a result of protesting on campus. He gave a speech when the antifascist group circled back to Red Square.

“Safe Campus [a UW student resource] told me they hope my harassers get bored and move onto someone else,” Weatherford said. “UW pays magical amounts of lip service in ASUW meetings, blog posts, events, yet it gets nearly nothing done…unless their capital is threatened.”

Earlier, when the antifascists first traversed the quad, onlookers seemed a bit confused. While the quad was full of people taking and posing for photos, children running around, babies sitting in the grass, people having picnics, dogs running free, and artists painting, a group of people dressed in all black with their faces covered (known as black bloc) marched through with signs explaining that UW let somebody get shot on campus. Needless to say, it definitely turned heads.

One onlooker was Ryan Dieerich, who said of the protest, “Good message, poorly executed.”

Both he and Janet Whang, a fellow UW alumni sitting next to him, felt the protest’s message was unclear.

“The shock value is a little over the top: we can’t tell what that is about, but it’s gruesome,” Whang said. She also explained that she heard about “the Milo thing” but the details were a bit fuzzy.

“I feel like they’re fighting hate with hate,” Dieerich commented. The woman beside them said “they look evil,” because the antifascists were in black bloc.

Kate Jacobsen, a UW student who was on her way to class, said one of her professors brought up the shooting in lecture the day before.

“The teacher was like, ‘someone should be in jail,’” she said. “The administration doesn’t like to talk about things like this because it brings a bad name to campus. I think they could’ve stepped in with Milo and not let him come because there was so much pushback.”

Despite multiple stories written about the incident, Jacobsen expressed that she had seen no reporting on it.

Eventually, some College Republicans gathered together to trail the protest from the HUB to Red Square.

One trailing individual, Jack, identified as right wing, and wished to document the demonstration. He felt the UW has done a fair job of being unbiased, and said the Jan. 20 protest was safe because only one person was injured in a crowd of hundreds — even though pepper spray and a few fist fights broke out that night. Jack did say, however, that the shooter could’ve missed and hit someone else.

At one point, an antifascist snatched College Republican Alex Guerrero’s purple hat that had “MAKE UW GREAT AGAIN” on it in yellow. When it happened, Guerrero began running alongside the crowd, yelling, “hey!” He then yelled that someone stole his hat, and yelled “police!”

UWPD Chief John Vincent appeared to shoo Guerrero away as he became upset. Vincent later told me “that hat is the last of our concerns right now. He said he’d buy another one.”

As for Sasha, who was present throughout, they stayed away from the republicans.

“I have no interest in talking to those people,” they said. “I don’t feel like I need to. Their ideology almost killed my partner. I don’t need to understand where they’re coming from; I don’t need to talk to them.”