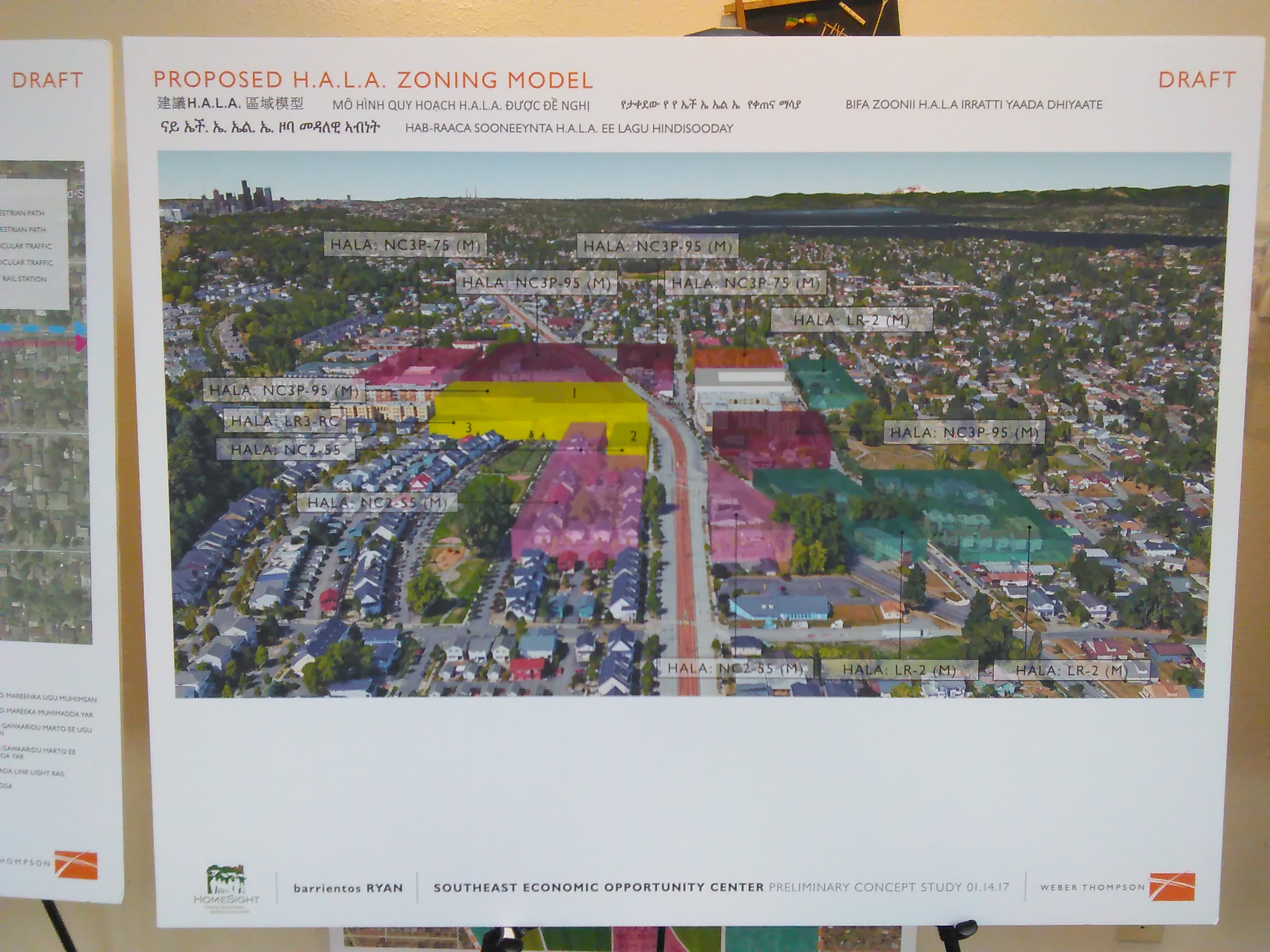 If you ever wondered what is in store for the seemingly unused land across from the Othello Light Rail station, the plan is to create something “unique” for developers and communities feeling the crunch of gentrification.

On Saturday, Homesight and its partners presented the final project design proposal for the Southeast Economic Opportunity Center to a packed room at the Ethiopian center. The proverb, “If you want to go fast, go alone. If you want to go far, go together,” quoted by Paul Patu, of the Multi-Cultural Community Coalition (MCC) perfectly captured the feeling of this gathering arranged to engage the community for approval and feedback.

For those unaware of the project, the Southeast Economic Opportunity Center (SEEOC) is intended to be a development combining an integrated cultural center, affordable housing complex, low-income home-ownership support hub, healthcare and public service center, educational hub, and business incubator. The project’s goal is to take advantage of the new up-zone and changing area to address community needs in light of the historically underdeveloped and under-served area.

The project has been spearheaded by Homesight, a community developer and homeownership organization. Since the first community meeting last August, community members have met with staff from Homesight to identify community priorities for programs tied to the proposed development. “We want people who are here in the community to stay and grow in place, and for people who do come to live here to feel a sense of ownership and not feel a sense of being pushed-out,” said Uche Okezie, Director of Real Estate Development.

The project now includes 20 project partners and 8 program partners, and the development is projected to cost $173,990,000 total. At the moment, Homesight is engaged in a capital campaign to raise the funds and have enough to develop the project without debt.

Dr. Benjamin Danielson, of the Odessa Brown Children’s Hospital, was extremely enthusiastic about his organization expanding their services through this development: “I hope we’re going to be able to go well beyond traditional healthcare, but first there will be traditional healthcare because that’s what families need as well…really expanding our mental health services as much as we can because that’s what communities tell us they have the greatest need with the least amount of resources for.”

Danielson also mentioned that this would be done in a ‘culturally-relevant’ way by, “bringing in as many from the community we’re trying to serve,” and he gave the example of a nutritionist who would go to whichever grocery store patients frequent to work with them to provide the advice they need for a healthy diet.

The greater community conversation came with a panel featuring Davidson and representatives from Green Dot, a charter school that is planning a campus in the SEEOC, representatives from MCC, and Sound Childcare Solutions. A number of the questions from the crowd involved wellness programming and safety, and the panel described “flexible” spaces or spaces that youth and community members could utilize.

For the panel, which was majority non-white and had an almost 50/50 gender balance, a unique demographic for such development conversations, equity was a big focus. Paul Patu from the MCC, in particular, identified himself as a longtime resident and someone who has been deeply affected by displacement: He contrasted the Southeast Economic Community Center with the ongoing development in the Central District.“ This process has been way more inclusive and they’re actually leaning forward and asking what the community has to say about how this development will affect the surrounding neighborhood.”

Patu, with the other panelists in agreement, described other community meetings around proposed housing or retail developments that have felt “one-sided.” After the panel, the Executive Director of Homesight, Tony To, described the integration process as a “work-in-progress” and announced that Homesight would be hiring an integration manager to coordinate how agencies and organizations would work together in the complex.

As he referenced recent events around development at 23rd and Union, To passionately framed the Center not just as an economic opportunity for South Seattle residents but also as one for ‘community-ownership’ and inclusive development: “We are people who are not supposed to have any power. We’re people who are not supposed to do for ourselves. Even when we have the money that’s not enough…if we were not who we are, we wouldn’t even need the money!”

Homesight and their partners so far are on point to negotiate and sign an agreement and begin the permitting procedures this summer in a five-year process that will build parts of the development in phases with the culmination of the entire development in 2021 with the Economic Development Center. At the end of the event, To and Okezie urged attendees to sign petition cards to send to the Seattle Housing Authority. For more information on the project or to support the project, contact the Executive Director at tony@homesightwa.org or Uche Okezie at uche@homesightwa.org.

Cliff Cawthon is a Seattle-based writer originally from New York’s queen city, Buffalo. Clifford has been civically engaged since he was a teenager in Buffalo and his advocacy work taking him to places as far away as Cuba.  He’s also an alumnus of the University of Manchester, in the UK, where he graduated with an M.A. in Human Rights and Political Science.