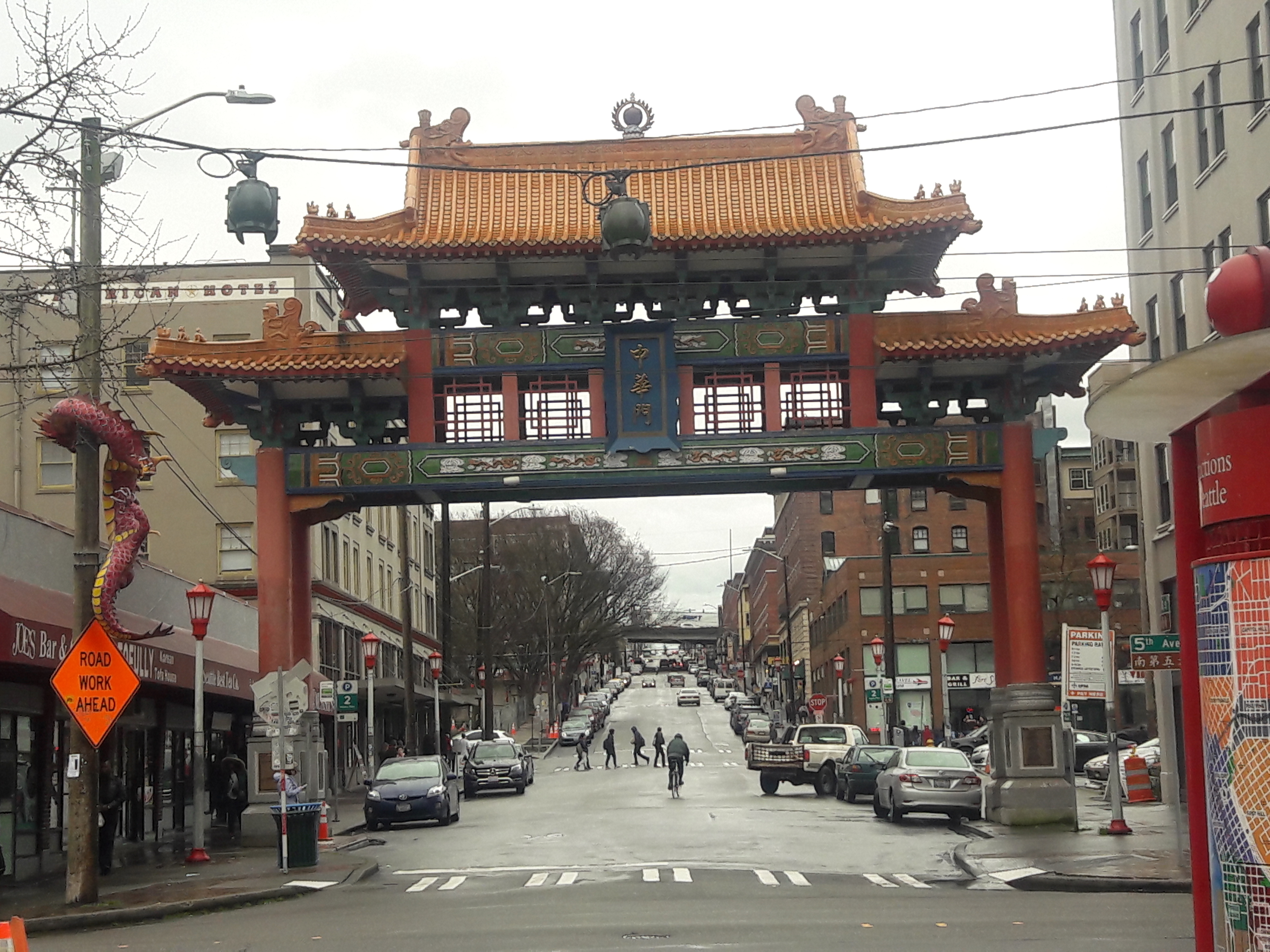 Seattle’s Chinatown/International District is woven with contrasts. Treasures like the Sun May Imports store, with its antique register and buildings like the Kong Yick building on 8th and King, and the Panama Hotel (now a teahouse) on East Main Street burst with history. But alongside the rich stories are public safety concerns and a lack of green space for sore eyes. Plastered to the side of buildings are notices for development projects, like the looming shadow of a proposed 14 story Marriott hotel. The air is laced with pollution from I-5, which splits the neighborhood in two.

Most of the CID’s residents are from Asian and Pacific Islander communities. The mainstream narrative of Asian Americans is one of a “model minority”, a group seemingly wealthy enough that decision makers pass over pressing community needs. The CID shatters this stereotype, with 34% of residents living at or below the poverty line, facing health disparities.

The World Health Organization defines health as “a state of complete physical, mental and social well-being and not merely the absence of disease or infirmity.” With the number of environmental and social conditions affecting residents’ quality of health, the API and broader community in the CID are dealing with a serious case of health inequity.

Puget Sound Clean Air Agency reports that hospitals see more patients from the CID for air pollution related issues than 99% of the Puget Sound region.  Compared to the Puget Sound region, more CID residents self-report their general health as being “fair or poor”, and feeling “frequent mental distress” according to a 2015 health analysis by Public Health Seattle and King County.

Many residents are elderly and these environmental conditions jeopardize their well being.  “If you are here as an elderly person living by yourself and you have no way of socialization…behavioral [and] mental health issues, specifically isolation, [and] lack of social connection for the elderly can be exacerbated in this kind of neighborhood,” said Sunshine Monastrial who is Planning, Development, and Evaluation manager at International Community Health Services.

This isolation and the perceived lack of safety felt by residents, cause heightened levels of anxiety. A 2016 public safety survey conducted by community organizations found “70% of respondents reported feeling anxiety or stress due to feeling unsafe going outside the CID”.  Because residents don’t feel safe being outdoors, their ability to socialize is limited, leading to a general lack of well-being and connection across the community.

This is where InterIm Community Development Association’s Healthy Community Action Plan, published last September, comes into play. It is a framework – set in paper – that outlines clear strategies to remedy the CID’s challenges.

The plan was made possible by a grant from The BUILD Health Challenge and took a year to develop. While InterIm CDA spearheaded efforts to develop the plan, it was drafted in collaboration with community partners, which currently include Swedish, Seattle and King County Public Health, Chinatown International District Business Improvement Association, ICHS, Seattle CID Preservation and Development Authority, and Yesler Community Collaborative.

Valerie Tran is the Healthy Community Program Manager. She says this is not the first time neighborhood organizations have collaborated, or even come up with a shared list of goals. “Everyone wants to see a safer, healthier, more livable community but this is the way to tie it all together,” said Tran. Each organization brings a distinct set of expertise to the table. Together they can tackle issues by dividing and conquering how they will implement strategies towards a healthier neighborhood.

The plan is a guide that can provide stakeholders, from City of Seattle departments, to the common citizen, with pointed, data backed strategies for action. The plan creates accountability by calling on groups and resources for the tasks at hand; “if you actually call out specific people, if you put specific resources to work, I think that is what makes it actionable,” said Tran.

It’s important to look at the past when considering why the CID is the way it is today, and how a plan like the HCAP can be effective. The organizations involved recognize the history of marginalizing communities in the neighborhood, and include this in the language of the action plan. Institutional racism, the residue of old practices like redlining, and “disinvestment in the neighborhood” are all factors that have created “conditions of concentrated poverty, poor environmental quality and unsafe public space,” the HCAP reads.

Going Back in Time

When Chinese laborers settled in Seattle in the mid 1800’s, they were forced to live in Yesler terrace due to segregationist zoning laws. Racism, cemented in economic and educational institutions limited opportunities for the migrants. But Chinatown still thrived, even as it had to relocate multiple times due to rising real estate prices in the early 1900’s. It became a pan-ethnic community where Chinese, Filipinos, Japanese (who were Seattle’s largest ethnic minority at the time) and Blacks mingled and created communities. Then Roosevelt signed Executive Order 9066 in 1942 sending Japanese-Americans into incarceration camps.  Seattle’s Nihonmachi never recovered even after Japanese Americans returned.

In the 1960’s a slew of development began; I-5 was built despite opposition from the community. Ten years later, activists protested the construction of the Kingdome, which was built anyway, setting a precedent for future stadiums. Amidst this tumultuous time, community activism led to the formation of local advocacy organizations, like InterIm CDA and others involved in the HCAP.

The CID isn’t alone in facing this history and the challenges it produces. A study published in 2006 details that “various aspects of social inequality have contributed to the greater burden of environmental hazard exposure and health risks for communities of color and the poor.” Improving the health of a community that has historically been denied access to resources and struggled for political agency means treating more than just symptoms of physical ailments. It needs a systemic shift that will not just improve health, but empower the community. The HCAP  sets the groundwork for those transformations to happen.

Lead by InterIm CDA, community organizations have interlaced environmental, social and political goals: “to reduce chronic stress, social isolation and sedentary lifestyles by increasing investment in public spaces, and safety, stabilizing and enriching our residential and business communities, and influencing key-decision makers and policy around issues affecting the community’s health.” These goals are broken into nine strategies, detailing exactly how each will be implemented.

Progress always take time, but programs are already underway. At Hirabayashi Place, InterIm CDA is piloting health and wellness, and financial literacy programs, a Tai Chi class and cooking series. Residents take leadership roles and share skills in this space where health and socializing come together.

Public safety improvements are also on the way. Half a million dollars from the City of Seattle are going towards funding one public safety coordinator, getting efficient waste management in the neighborhood and renovating the Danny Woo community garden.

Puget Sound Clean Air Agency will tackle air pollution, and is collecting data to inform a study that will determine the concentrations of airborne pollutants. The data will help diagnose cancer risk in the neighborhood. InterIm’s youth program, Wilderness Inner-city Leadership Development environmental education program will be involved in regularly collecting data.

Moving Forward and the Challenge of Balancing Interests

Time and again projects like, I-5, the Kingdome, the First Hill street car and most recently a Navigation Center in Little Saigon are proof that decisions are imposed on the CID neighborhood without thoughtful engagement.

“[We are] constantly trying to ensure that the city and whatever other bodies that end up doing projects …[are] sensitive to the community [they] are impacting. Building that bridge between the city and other significant capital developers, public and private partnerships has been a challenge for us,” said Monastrial.

The road ahead for the CID bustles with increasing real estate prices, gentrification, and conflicting interests. Tran is hoping some things won’t change. “I would hope that there is still strong community ownership in the neighborhood and by that, I mean the people that have lived here for a long time… are not displaced,” said Tran. While community members worry about change, they simultaneously recognize the economic boost that can come with new development. With competing interests, conversation and collaboration are crucial.

The HCAP is not a law or code developers and decision makers are required to followed, but is an opportunity that must be seized and utilized. The HCAP is an invitation for decision makers across sectors and interests to work with the CID community to achieve the neighborhood’s decades-long struggle for equity. Perhaps a few years from now, multiple generations of residents will bustle along the sidewalks, inhaling cleaner air, and gathering in greener spaces well into the night without feeling unsafe, all while knowing that their voices are heard and valued.