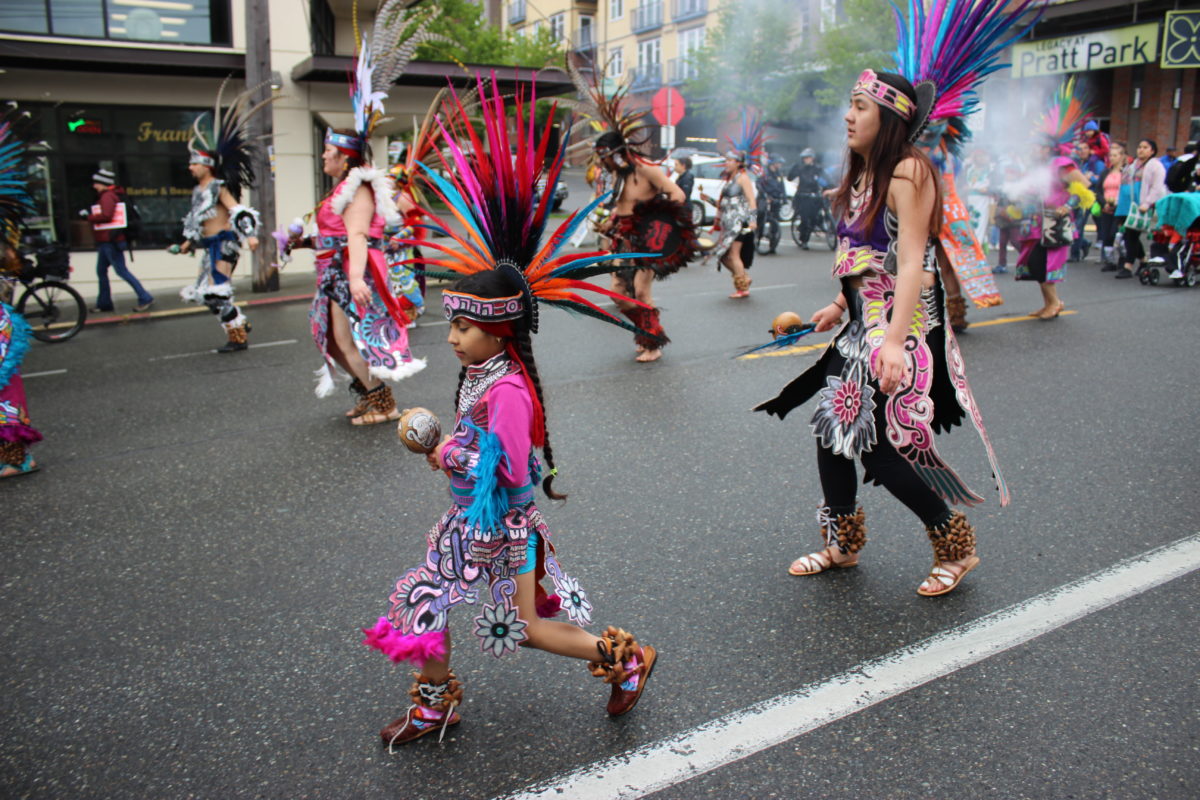 Dancing, singing, drumming. That was the atmosphere as dozens of local organizations gathered Monday afternoon for the annual May Day Seattle March for Workers and Immigration Rights from Judkins Park to Seattle Center.

Thousands of signs were raised high, in support of immigration and workers.

Fair Wages for All.

No Human is Illegal.

Justice for All. Healthcare for All.

The People United will Never be Defeated.

Ebony, a 17-year old Franklin High School student, walked with One America, where her mother Mergitu Argo is the South King County organizer.

“I’ve always been very empowered by my mom always taking action and protesting,” she said. “I feel like that’s the best way to be a voice for people who don’t have a voice. Also, my teachers encouraged me to come because they couldn’t be here today. But, they’re supporting from where they are, they have their protest shirts on.”

Her sign had a quote from Malcolm X: “If you don’t stand for something, you will fall for anything.”

Diane Narasaki, executive director of Asian Counseling and Referral Service, said that she joined the march because of the injustice that her family experienced in World War II as Japanese Americans.

“My family was interned during WWII in the Japanese American internment camps and my entire community knows what it is to be racially profiled and detained and rounded up and put in camps on the basis of their nationality and race. We see the same sort of allegations being made against Muslims under the banner of National Security and we think it’s really important — I think it’s really important — to come out and make those links and to say that we’re not going to allow this to happen again.”

Narasaki said this year, it was important to stand up.

“We think it’s a really important time to raise up the fact that immigrant rights are human rights. And it’s also a time when people fighting for climate justice, people fighting against racism need to come together with one voice to say that ‘we will protect each other’s rights.’”

Elsewhere in the city, the 2017 May Day events also included a “pop-up bloc party” outside of the King County Juvenile Detention Facility to protest the proposed new youth jail and a pro-Trump protest in downtown Seattle. There were no reports of property damage and police arrested five people. It was a difference from last year, when nine people were arrested in an evening march organized by a self-described anti-capitalist group that resulted in vandalism to downtown properties and cars.

While the atmosphere downtown was described by some news organizations as tense, Mayor Ed Murray told reporters the city was expecting a larger crowd — one on the scale of the Womxn’s March which took place earlier this year.

One man took to the stage and said he and his fellow “indigenous people, we come together and share song, share space. Common unity is what makes community.”

“The people that are helping direct us kept saying, ‘slow down, slow down, you guys are going too fast.’ But when we’re singing our songs and we’re in these dances, we’re in an altered state of consciousness. We’re able to transcend time, transcend space….We just marched five miles I think, but it didn’t seem like it.”

He encouraged the crowd to remember that feeling.

Damme Getachew is an aspiring global storyteller. She loves words, art, film and people. A Seattle native with global roots, Damme desires to live life uncomfortably as she fights for what she loves and connects with those who challenge her perspectives. A 2016 Global Development grad from SPU, she’s excited to continue living out her passion for social justice, human rights and youth identity formation.