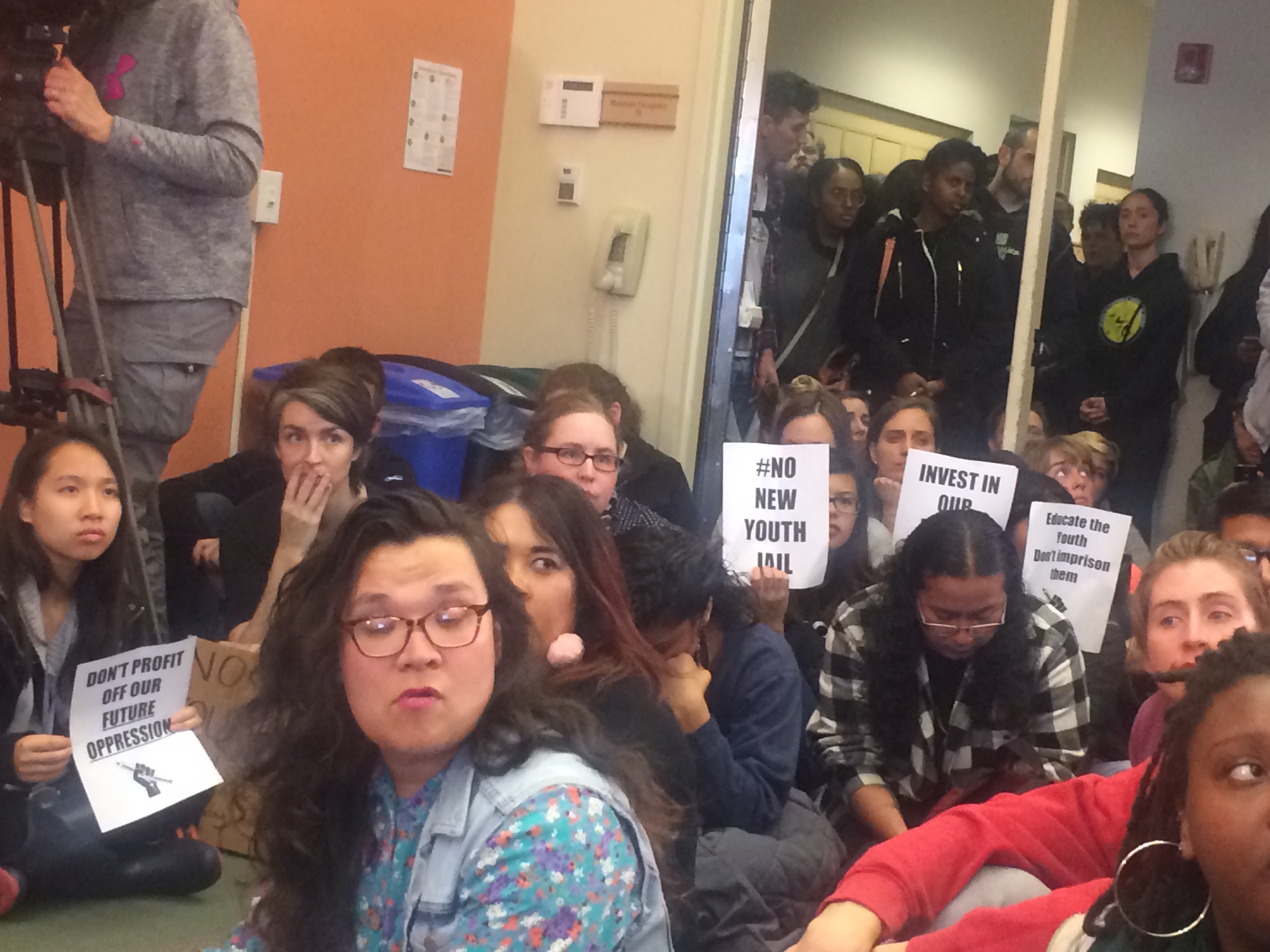 Over the summer, Seattle’s #NoNewYouthJail movement’s future steps seemed unclear. After more than five years of protests, demonstrations, teach-ins and community outreach, it appeared the “youth jail” people had been fighting vehemently against would soon be constructed on 12th and Alder in the Squire Park neighborhood.

However, a hearing Tuesday evening showed the fight against King County’s $210 million “Children and Family Justice Center” — which, along with courthouses and youth program space, will house a 92,000 square foot juvenile detention center, replacing the current one —  is far from finished.

A slew of unpublicized errors made by Seattle City and King County Councils was that evening’s focus.

The building’s 2012 legislation clearly stated its construction fell under what is called Type II decisions, which lets the public appeal to City of Seattle Hearing Examiner Sue Tanner. But when Ending the Prison Industrial Complex (EPIC) and others appealed the approval of the Center’s master use permit to Tanner in late 2016, an issue arose.

Tanner lacked the jurisdiction to hear the appeal. The reason: somehow, both Councils failed to file the construction under Type II procedures and decisions. This means nobody can appeal the Center’s construction or plans.

To remedy this mistake, O’Brien and Sawant introduced and created Council Bill 11893. The bill gives Tanner jurisdiction to oversee the appeal process of the master use permit by actually filing it as a Type II decision.

Prior to a vote for the bill, however, people testified. The SU room quickly filled, and many sat on the floor. Fifteen minutes in, camera lights and body heat made the room incredibly warm. The room was so packed that onlookers’ eyes shined well beyond the doorway. #NoNewYouthJail shirts peppered the diverse audience as they listened intently to testimonials of lives damaged by incarceration.

Asha Heru began her testimony by sharing the horrors of federal prison and the tolls any jail or juvy take on someone. She painted a picture of visiting family members in prison.

“When you’re in that building and the bell sounds like your high school bell, and you’re sitting with people who you love and who you know don’t deserve to be there, it hurts,” Heru said. “It’s not just the people locked up, it’s the people outside too.”

She then addressed the Councilmembers.

“The same people who are spending their tax dollars, trusting you with their vote, are the same people being hurt by the system,” Heru said, “and you have an opportunity to do something different, to do something better. If you want to be about change, start being about some real change. Stop being so scared.”

Numerous people used their testimonies to point out SU’s involvement in the new juvy. SU students walk by the current juvenile detention center every day on their way to class.

One of EPIC’s lead organizers, Senait Brown, expressed how the movements’ attendance of the juvy hearing aren’t meant to be interpreted as support for its creation.

We’re here because we know that the red tape gets pulled out of the same avenues any other white person decides to use in this city.”

Brown went on to explain that members of EPIC believe systemic transformation is possible only through community relationships, not investment in the current bureaucratic system. EPIC’s presence was intended to strengthen organizing, not the ordinance.

Instead, the solution, for Brown, is for the community to take back their kids from the system. Accountable relationships would permit the community to look out for, among many other things, each other, each other’s families, education and medical needs. This is what’s known as “The People’s Plan.”

Susan Taylor, who was a nurse for incarcerated youth at the current Youth Services center,  also provided testimony. Voice quivering, Taylor’s face turned red as she recounted her experience.

“I witnessed the profound harm that youth incarceration causes,” Taylor began. “I witnessed the loss of opportunity…enrolled in the garbage fake school they have in [the current center] … because of the nature of this racist system, the mentors of these children must instead teach these children to fill out legal forms, and learn the deadlines of courts and appeals.”

At one point, Taylor recounted a still vivid memory forcing her to pause after her vocal chords strung tight with emotion. Taylor walked into a cell to find a young teen mom curled up, crying in the corner. The girl wasn’t allowed to breastfeed her newborn, and so she was undergoing excruciating breast pain [a frequent symptom of mothering] from storing too much milk.

“The physical pain in her body was profound,” Taylor said, “but only the fraction of pain in her heart as she was kept from her child.”

Another testimony. Unique Walker didn’t plan to speak that day, but she was propelled by the testimonies before her.

There didn’t appear to be a dry eye left in the stifling hot room. Walker’s pain lingered in the air.

While most of the crowd was under 40 — many in their 20s — the Raging Grannies were present, and sang for a testimony.

Tyrone Brown pointed out that the King County Council is just as involved in the new juvy implementation, and many of the members’ positions will soon be up for re-election.

Councilmember O’Brien closed the meeting with apologizing for his direct participation in the juvenile incarceration system when he cast his vote to approve the master land use permit for the center back in 2014.

“I just want to apologize to folks in the room that you have to be here to dismantle a system that should’ve never been created,” he said. “I don’t want to pretend that correcting that one [Type II] mistake undoes the years of injustice.”

Previously, Heru said in her testimony that she and others in EPIC and No New Youth Jail had to “check” O’Brien, saying “Mike, what’s good?” But then laughing and acknowledging O’Brien was there this time, after the confrontation, and he even brought somebody with him.

Both councilmembers voted for CB 11893 to continue down the pipeline. It will now have a second hearing in front of Full Council on May 30th according to councilmember O’Brien’s office. If the bill passes all the way up, a court has to then approve it. The Seattle City Council does not have the ultimate power to remand the decision type.

Supporters, however, constantly reiterated that the one person capable of stopping the new juvenile detention center from being built is King County Executive Dow Constantine. As the county executive, it is within Constantine’s power to halt construction on facilities built with county funds.

The county’s sustained contention is that the center was approved by voters, and the contract they signed with Howard S Wright to build the facility is binding.

Members of the #NoNewYouthJail movement say they will continue to make the jail a focal point during Constantine’s re-election bid.