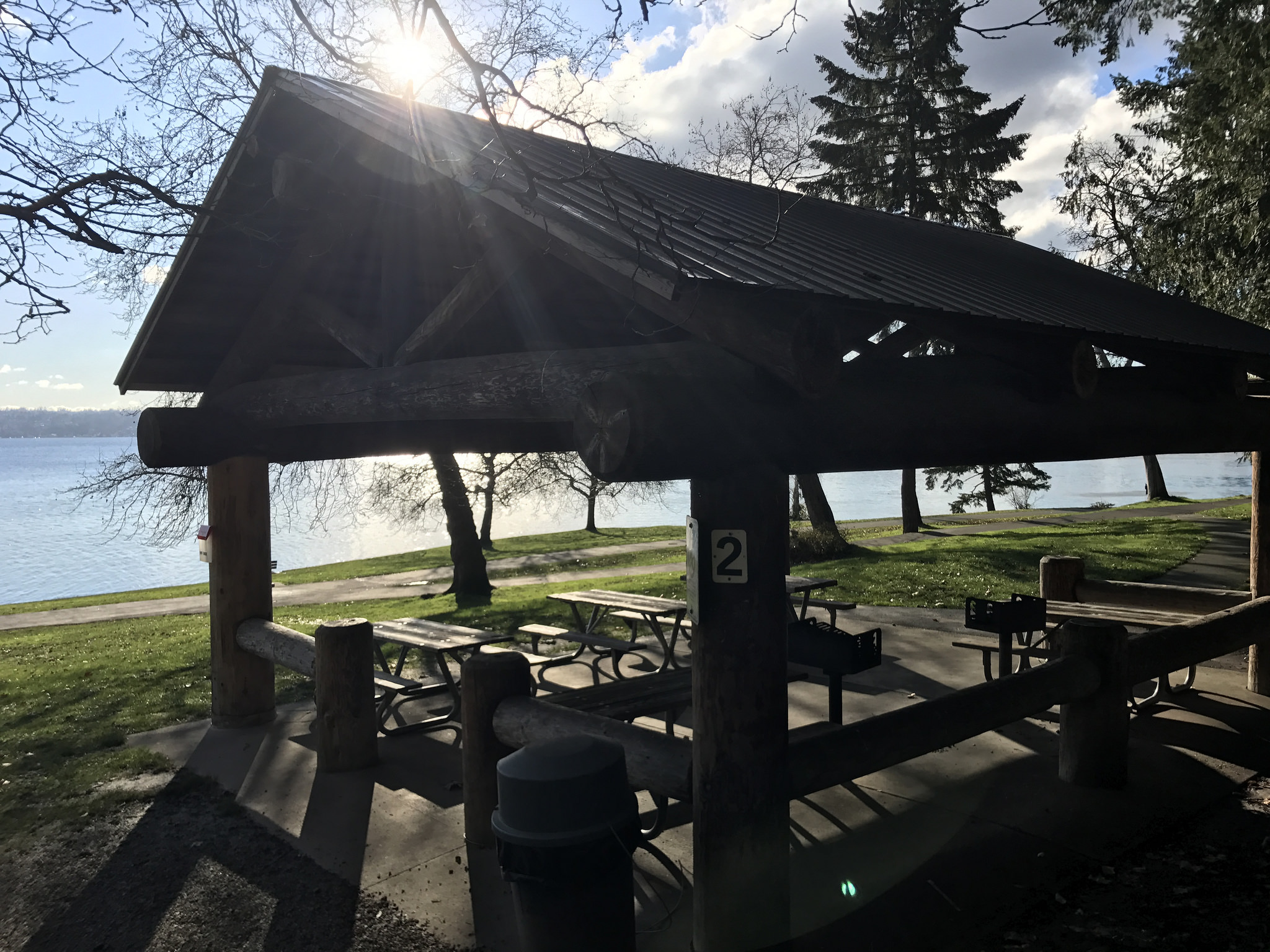 The sun was shining and greenery, smiles, and chatter abounded on May 19th when Orca K-8 fourth graders went on their final Nature Connection field trip of the year with the Seward Park Audubon.

This field trip was the sixth for many students who are in year two of a spiraling nature connection curriculum that has been developed with the Seward Park Audubon Naturalists Kathryn Sechrist and Porcupine.  This program started in partnership with Orca K-8 in 2015-2016 but expanded to include Graham Hill and Hawthorne Elementary this year.

On this day the naturalists were also joined by two special guests from the National Park Service who were there to hand out Every Kid in a Park passes. Also present was Seward Park Audubon Intern Alex Francisco.

Groups split off by classroom, with each assigned to a different naturalist.  I attended the classroom experience led by Kathryn Sechrist, Seward Park Audubon School Programs Manager, and the group with all the guests in attendance.

From the start of the program it was clear students were accustomed to the opening routine: circle up, tune into the moment and experience the place. On this day the opening awareness activities included stretches and a relationship building activity which was a quick round of “What is your nature name?”

Even the park rangers participated. Charles Beall, Superintendent Seattle Area National Park Sites, shared his nature name as Makȟóšiča, the Lakota Word for the Badlands.  Casey Andrews, EKiP Seattle Collaborative Project Coordinator took on a name the kids thought of for her: Squirrelly.

Kathryn, nature name Moss, then asked questions of EKiP Coordinator Andrews and Superintendent Beall so that the kids and chaperones could learn why these Park Rangers were present. The goal was to form connections for students and families to the National Parks.

Before long the group headed from the large meadow of Clarks Prairie to the trail around the peninsula.  At the Andrews Bay waters edge our group saw both baby geese and baby turtles before heading up into the Magnificent Forest. Once in the forest Kathryn led the group on a meandering trail hike and activities including a partner/ blindfold “get to know a tree activity” and a game of camouflage.

As we walked along, I asked the National Park Service staff and the Audubon intern “Why are you out here with our students today?”

Alex, the Seward Park Audubon intern, is finishing his BA in Biology and considering a career in education. He wants more people of color to experience nature and our parks.  Growing up in the Beacon Hill Neighborhood, Alex said he often finds himself the only person of color on a hiking trail or in the woods.

He’s inspired by the Seward Park Audubon’s programs and emphasized how much he liked the Tenacious Roots program because he has enjoyed seeing the diverse group of teenage students gain leadership skills and become leaders.

Superintendent Charles Beall said he came because he enjoys interacting with the community, especially when the opportunity occurs in a place like Seward Park. He repeatedly expressed that visiting National Parks -or even local parks- is a way to discover your heritage and legacy.  He says “Go to the parks!  The belong to all of us.”  They are a place for learning about culture, lands, vegetation and wildlife, the mountains and water and history.

Beall believes that for the first 100 years of the National Parks Service there has been lip service to inclusion, but that it has not been enough.  He knows that there will never be a big enough menu for all the things that are needed for our parks to be fully inclusive, but stresses that he and National Parks Service is listening and hears the messages.

Often the messages he hears are that people want their nearby parks cleaned up, with better lighting and bathrooms.  They want seniors to be engaged.  Perhaps that is why Klondike Gold Rush Nation Park, where Beall and Andrews work is so important.  It offers a place to be a connector between the National Park Service and the urban public. It is also a hub for other Seattle Area National Park Site affiliates including: The Wing Luke Museum of the Asian Pacific American Experience, the Bainbridge Island Japanese American Exclusion Memorial, and the Outdoor Recreation Information Center at REI.

For the fourth graders, this afternoon with the rangers and their Audubon Naturalist, was a school day of play, discovery, and a lot of walking.

In closing, students sat in a circle, content to be back in the Clarks Prairie meadow, listening to  Andrews and Beall tell them about the  EKiP pass they would be getting when they returned to their classroom. The students were excited to know that these passes are worth $80.  In actuality the possible memories and experiences are priceless.

“The Parks are your inheritance. You legacy.  This pass is one small way to connect you to these special places.  Because you are a fourth grader you get a pass. No matter who you are, if you live here- the parks are yours and you can bring who you want.” said Beall.

Students asked if they could really bring whoever they wanted and Beall answered yes.  They just need to fit in your car if it is a site that charges per vehicle.  Or if a site charges by person then up to three accompanying adults will be admitted for free along with the 4th grader. In followup conversation Beall also reaffirmed that  anyone can go to our parks and that no National Parks staff will ask your immigration status or country of origin.  However, if the National Park is within 100 miles of the border then Homeland Security and the Border Patrol do have a right to do vehicle checkpoints.

For current 4th graders the EPiK pass is good until August 31, 2017.  It is good not only in WA state but across the country.  In September distribution of EKIP passes will begin for next year’s fourth graders.  Beall and Andrews are excited to keep reaching out into communities such as  South Seattle and work in collaboration with organizations so all 4th graders and their families know about this opportunity.  Through the Every Kid in a Park website anyone who works with fourth graders or who has a fourth grade student can apply to get passes for fourth graders.

The next step is making sure that families know how to plan for trips.  While students can currently go to everykidinapark.gov  on June 1st ekipseattle.org will be launched.  This will be a tool to help local students make the most of the passes.  Another resource is the Ranger station at REI which is a partnership between the  National Park Service, US Forest Service, and  Washington State Parks.  It will be especially helpful if you are planning on camping or trying to figure out what trails to explore.  The Washington Trails Association also has online resources for trip planning.

Our local fourth grade students now hold a key to our National Parks, and federal lands and waters, but the rest of us do not need to despair.  Locally we can catch the light rail or #7 and head to our nearest National Historical Park, the Klondike Gold Rush Historical Park.  It is always free and has both permanent exhibits and rotating exhibits.  Just opening is an exhibit on Homecoming: Bringing Fishers Back to Washington .   It welcomes you with a gorgeous mural that was painted by the community.  Also the nearby National Park affiliate the Wing Luke, while not free to the public, is free for fourth graders with their EKiP pass and half off for those who accompany the student.

The National Parks also have free days.  The remaining free days for 2017 include: August 25, National Park Service Birthday, September 30, National Public Lands Day, and November 11-12: Veterans Day Weekend.   Other discounts  including senior discounts and free passes for active military and people with permanent disability can be found at the National Parks Website.

Our local parks also hold remarkable treasures.  As the fourth grade group was gathering to leave the Magnificent Forest of Seward Park, just off the main Sqebeqsed trail students saw a pileated woodpecker, the largest woodpecker in North America.  This was after having just witnessed the park’s Heritage Tree, at around 500 years old it is perhaps the oldest tree in Seattle.  Students were in awe of its thick bark and great circumference.  Oh the stories that tree can tell!

The Seward Park Audubon also offers many programs for the public announced on their bulletin board and also through their weekly Chickadee Chatter email which you can subscribe to on their website. They also maintain a dry erase board on which people write down nature observations and  staff at the Seward Park Audubon, including the Center Director Joseph Manson (Joey) encourages people to stop by and share observations as well as ask questions while visiting the park.

On May 23 the University of Washington Botanic Gardens and Plant Amnesty hosted a conference on Equity and the Urban Forest. The presenters would be glad to see how the movement to connect our children and youth to nature, following up with mentoring and then career opportunities, is growing right here in our community.

Laura Grow is an Orca K-8 Parent,  and Garden & Environmental Education Liaison to the PTSA

Every Kid in A Park

“When we try to pick out anything by itself, we find it hitched to everything else in the Universe.”- John Muir