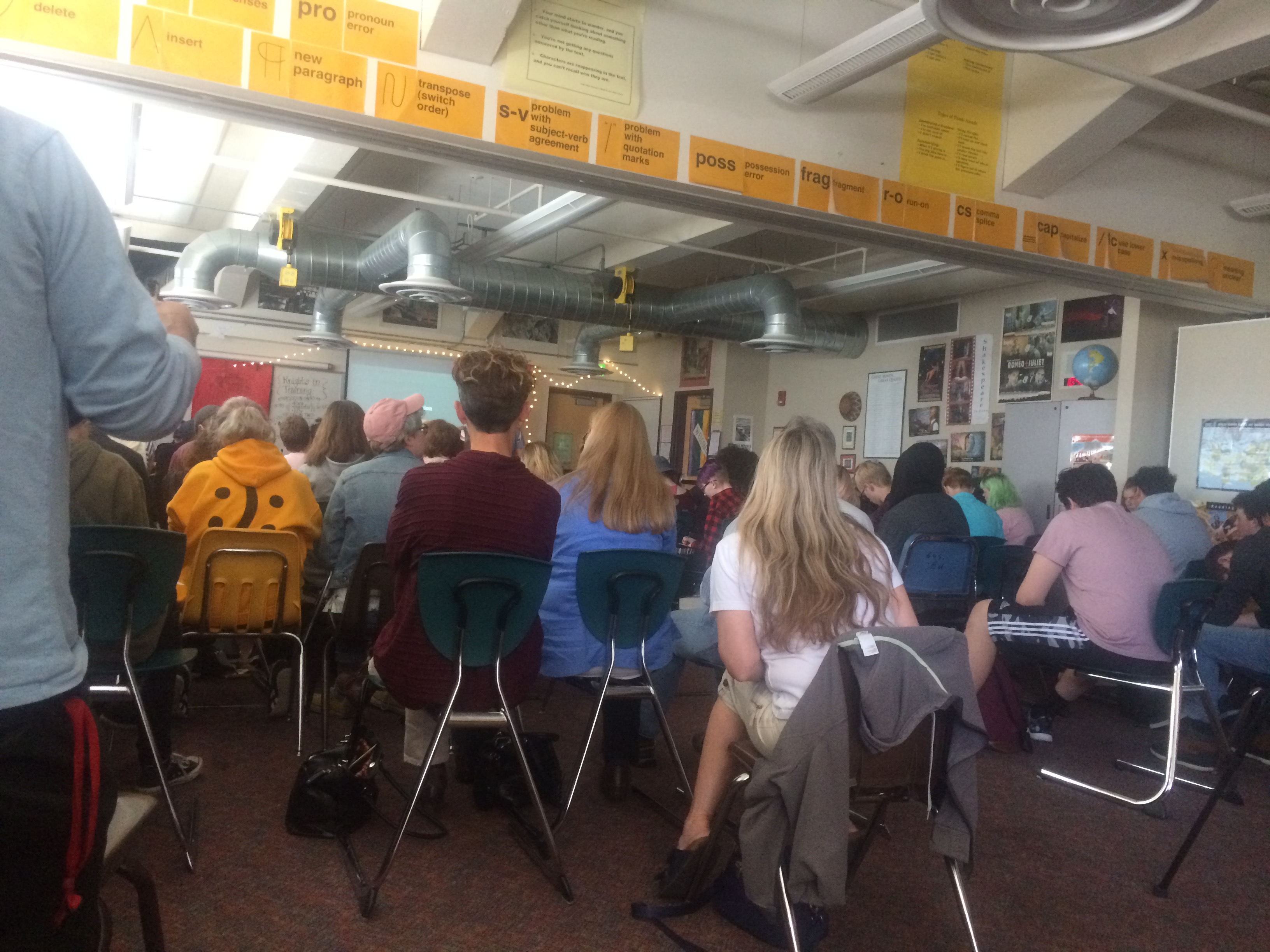 Teacher Jon Greenberg spearheaded the presentations, which first began in 2009.

“I felt confident enough about widespread quality to invite the press,” he said of the student projects, expressing pride in the young presenters. “They’re picking topics that are so close to them. They’re trying to act on it, to make this a better place for other people.”

While schools often hope students will be civically engaged, Greenberg insisted such engagement must first be nourished and then constantly practiced.

“Do you want to replicate the status quo or reform it?” He said students at his school are reforming it.

One of the presenters, Aleiya Fuller, had a presentation that fully captivated at least one of the attending teachers. It was about the many ways in which Black women’s natural hair is policed in school, and the workplace.

Fuller herself, however, has experienced it. She has even had teachers approach her and touch her hair. For her project, Fuller conducted interviews documenting Black women being bullied by teachers and peers for their hair.

This is nothing new. Back in 2013, a 12-year-old girl was threatened with expulsion in Florida. It wasn’t until last year that a Kentucky high school lifted its dress code banning Black hairstyles. There’s even legal precedent that allows discriminating against Black hair: Rogers v American Airlines.

Fuller’s own research found a teacher cut a student’s hair, and another student was suspended for their hairstyle. So Fuller made a film about it. The video essentially compares how long it takes her to do her hair compared to that of a white girl.

“There was so much information,” Fuller said of her research. “I also wish I had more people around me who were more natural like me.”

The  purpose of the video, she said, was to make sure people knew they weren’t alone in their struggles, but also to address how discrimination against something as silly as hair can change.

“I wanted it to be a call to action,” Fuller said. “It shouldn’t have to be in a dress code.”

“There’s people in this country who have never met a Muslim besides in passing,” he said. “All they know is what Fox news says, and then shows like Black List.”

He discussed how Muslims are typically treated in America in his estimation: either disliked and discriminated against, or viewed with heavy suspicion.

“And some of them are American citizens, which doesn’t have a little asterisk by it in the constitution,” he added.

Layla Mohamud said the presentation was interesting and she appreciated it.

“The only time there’s a good Muslim represented is when it’s condemned or hidden,” she added of being Muslim. While that day’s presentations weren’t problematic, Mohamud recalled a moment during her freshman year. A white girl student attempted explaining the day-to-day experience of a person of color in America, and failed miserably. Mohamud says it’s a fine line between getting facts wrong and respectfully advocating for POC’s rights. Basically, it’s easy for White people to get things incorrect when attempting to speak on behalf of another community.

When it came to Fuller’s presentation, Mohamud felt it was outstanding because it educated several people and derived from a personal experience.

Another student, Theo Whitney, discussed how toxic the idealized thralls of masculinity can be. His video about it featured his very own hand-drawn animation, and looked like something illustrated by professionals.

“My emotional reaction to the project could make it very hard to work at times,” Whitney said. “I think this is a very undeveloped topic in the media.”

Whitney’s research spun off of fathers, culture, and media — especially movies — reinforcing an unfeeling model of man. As if men can’t be anything but brute muscle, violent reactionaries, and sex-hungry.

Yet another student, Cassidy Graves, really took a vulnerable route by letting her project get at something personal. She presented on the demonization of female heroin addicts. She has been sober for just over 140 days.

The following is her poem “Where I’m from,” printed with her permission:

I am from the burning sensation of icy hot,

Accompanied by the mellowhigh of oxycodone dependency.

Van Morrison’s Moondance played the tune of my childhood.

The salty pools which gather in my green speckled eyes

Reflecting the definition of addiction.

17 stabs to the chest, one bullet, and a lifetime supply of abuse

And as mysterious as the billion of black tar I indulged

To escape my reality.

I am from the sticky sweet smell of

Resulting in tears because someone drank

The ones with dewy sick skin and abscesses

Foil lining the inside of my skull, deprivation of oxygen

Found in Westlake who plunged too deep.

Her still body traces my thoughts as I wait for

Security to take away the remains.

I am from repetition and distrust as I check county

Jails to make sure inmate 2234PQR02 is still

Making sure the cold black cylinder of his gun never

Revisiting the blue haze of plastic tarps where

Long fingers traces the body of a child.

I am from pupils so pinned, I wondered whether they

Would erupt into shards.

Similar to those found on the floors of trap cars,

I laid next to her broken hearted for 87 hours, 23 minutes, and 5 seconds

As my body shut down.

I am from long showers which break my swollen skin.

I am from cheap and bitter AA coffee and god

Grant me the serenity to accept the things I cannot change,

The courage to change the things I can,

And the wisdom to never look back. I am Cassidy,

I am a recovering addict and I will be ok.

Where am I from? I am from love.