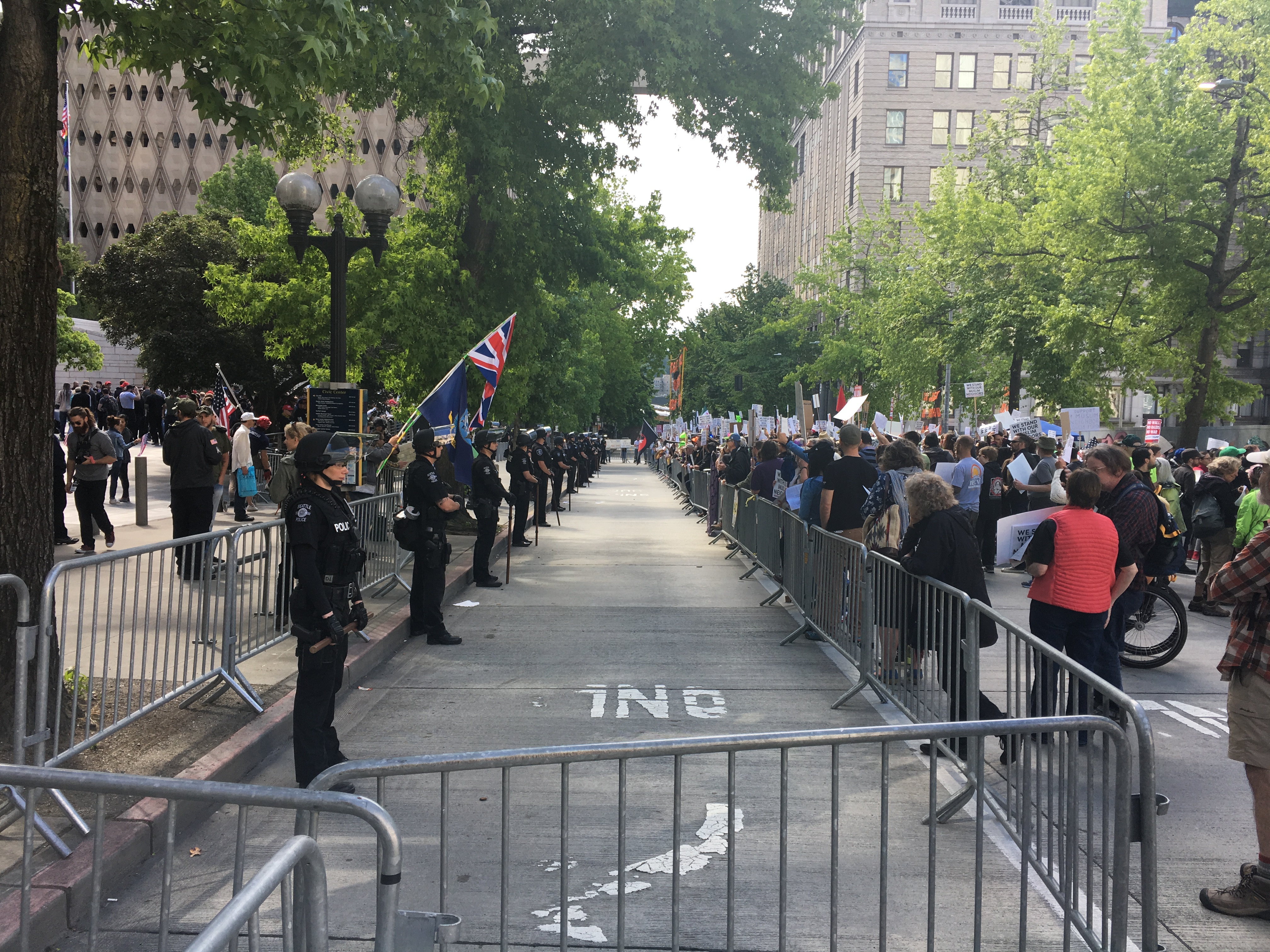 The militia member leaning on the railing next to me Saturday morning sported all the trademarks of a gear-jockey military contractor. A camouflage ball cap, special operations Kevlar plate carrier body armor, drop-leg pouches. And every, single bit of Velcro on his outfit was covered with all manner of stitched military patches, from tan-colored American flags to quips like, “I come, I fuck shit up, I leave.”

Together, we leaned over the railing of the steps leading to Seattle City Hall. In front of us, Seattle police stood in line behind metal barriers facing outward. Each of them bore broomstick sized batons.

“Who are you with?” he asked. On his right side, between us, his black automatic pistol reflected the sunlight in his waist holster. I answered I was writing for a local paper. “Which one?” he pressed again. I told him and assumed he’d never heard of it since he looked satisfied with my answer.

“Are you with Oath Keepers?” I asked.

“They’re here, but no. I’m just a patriot,” he replied. His face was almost indiscernible under his cap, black sunglasses and bushy goatee.

From the south, taking up all of 4th Avenue, a mass of counter-protesters approached us. Their voices, together in chants, rolled off courthouse’s walls like a wave crashing into shore in slow-motion.

“If you watch them, you can make out who each one is,” he said, watching the hundreds of people marching toward the line of police. “I have a degree in behavioral science,” he offered as a means of explanation. “It mostly breaks down into lesbians, gays, old women, hippies and men just trying to get laid.”

Behind us, Anthony Parish, one of the event’s organizers, was beginning to make statements between two speakers on tripods. I excused myself and slipped into the edge of the crowd. Parish’s audience was about 75 supporters and a similar number of press.

The event, part of a series across the U.S. called March Against Sharia, was organized by the non-profit ACT for America, listed as a hate group by The Southern Poverty Law Center. Members describe the organization as the “NRA of national security,” and argue Sharia, a set of Islamic laws, presents a fundamental threat capable of subverting the government.

The organizers moved the event from Portland to Seattle after a racist extremist stabbed two people to death and injured another when they attempted to stop him from verbally accosting two women he identified as Muslim on May 26th. The Mayor of Portland urged the change over the threat of additional violence.

Event emcee Anthony Parish read a statement from ACT America’s founder saying, “We are here to shine a light on Sharia which is steadily creeping into our society. It is incompatible with both our Constitution and our way of life.”

The list of organizations Parish gave special thanks to sounded like a who’s who of radical Trump supporters: the United Patriots, the Oath Keepers, the Three Percenters, Bikers for Trump, Main Street Patriots, Proud Boys, Sons of Thunder, Soldiers of Oden, the Knights Templar and “the patriotic security teams” present at the event.

The counter protest, coined Seattle Stands With Our Muslim Neighbors, shut down Fourth Avenue for the duration of the event after marching from nearby Occidental Park. While March Against Sharia speakers rotated through in City Hall Plaza, counter protesters chanted from the street below. Someone in the crowd even brought a train whistle.

Many of the counter-protesters were there to denounce an increase in anti-Muslim animus. The Council on American-Islamic Relations, the nation’s largest Muslim civil rights and advocacy organization, found that anti-Muslim hate crimes surged by 65 percent from 2014 to 2016.

Several speakers at the March Against Sharia event referenced increased incidents of female genital mutilation (FGM) in the U.S., a claim with some research backing it. FGM is practiced in many cultures, but is illegal under a U.S. federal law passed in 1996.

One speaker, identified only as ‘Mina’ asserted, “They don’t have a god, we have a living god.” At one point, Parish’s brother rose to speak and attempted to lead the audience in a “Ha-ooo” cheer from the movie 300. It was not successful.

As the protest proceeded, the roar of the crowd grew as groups of black-clad Antifa arrived, banging drums and pans, their faces covered in dark sunglasses and bandanas. They moved to the front of the crowd amid the blasts of air horns and commenced to yell back and forth with anti-Sharia protesters on the other side of the barricade.

As individual shouting matches broke out, news camera crews would swarm in to the belligerents to get close ups, giving the whole thing the weird air of a reality TV show in filming.

After the closing remarks a rapid change came about. The intensity had built on either side of the police barricades. Suddenly, it all became mobile as both sides of the affair met in the street.

Counter-protesters shouted for the group to march back to Occidental Park while flocks of journalists took pictures from the north side of Cherry Street. Most of the protesters peaceably disbursed, but a portion remained with the black-clad Anarchists in the center of the street.

Units of police riding in files on bicycles sped by startled pedestrians to throw their bikes and their bodies between both sides before an escalation could occur.

Small roving bands of anti-Sharia protesters moved through the streets. They would meet with Antifa resistance blocking their route, then duck off the street to hobble over rough alleys with more Antifa and cycle police in pursuit. In Pioneer Square, Seattle police ended a fistfight by pepper spraying the crowd before arresting three people for obstruction.

For all the megaphones present, not much communication took place.

Will Sweger is a Beacon Hill resident and freelance writer. Find him on Twitter @willsweger

One thought on “Dueling Protests Meet at Seattle City Hall”