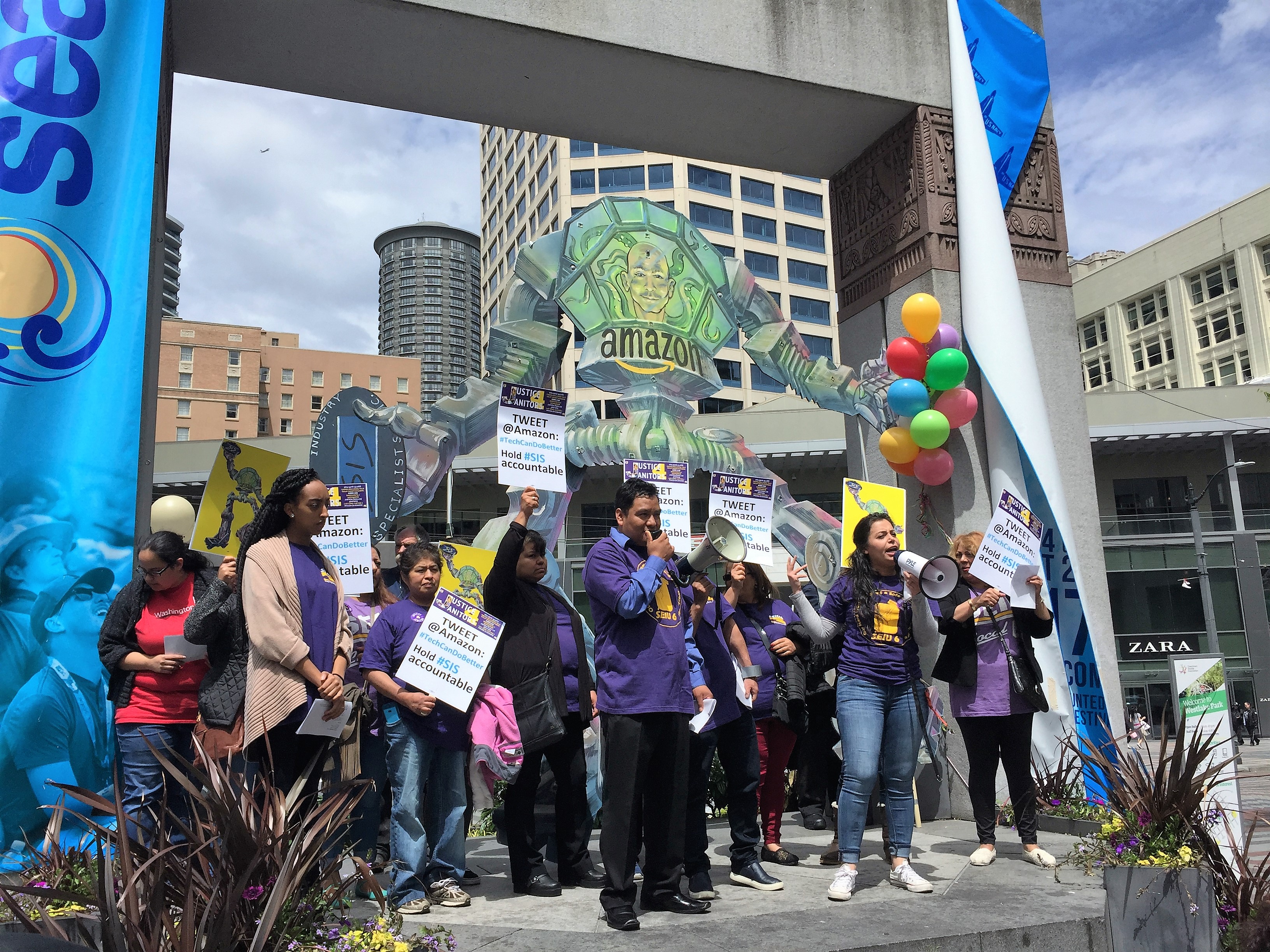 When workers allied with SEIU in February, it came to light that, for the second time, Amazon contractor Security Industry Specialists (SIS) was allegedly discriminating against its own workers. After months of continued action, Muslim employees were finally given a list of accessible prayer rooms, but some still face repercussions for taking a stand.

“For SIS, it’s been a struggle for us,” previous SIS officer Abdinasir Elmi said. “I have to hide who I am. I have to hide my religion.”

Another SIS Officer, Andrea Ball, is a U.S. Army veteran. When she requested schedule accommodations to meet her military commitments, SIS asked her to resign.

“I want Amazon to know their contractor treats us like second-class citizens,” Ball said. “We need fairness. We need protection, and we need these problems solved.”

Meanwhile, Amazon — which chose to subcontract with the security service in 2012 — has historically distanced itself from any responsibility regarding SIS. Amazon’s previous Seattle director told Seattle governing bodies that the security’s charges don’t involve Amazon.

The contract between the tech behemoth and California based SIS is rumored to be near its end, but Amazon has neither confirmed nor denied such inquiry.

Protests against SIS began locally when its Muslim employees faced zero accommodation in January for their religious practices. While Amazon provides prayer rooms for upper-level employees, SIS workers had no access to them. But there’s more.

During one protest, a group of three activists delivered a petition to  Amazon CEO Jeff Bezos’ office only to sit in the waiting room, while their superiors watched and scowled. After speaking out about their mistreatment during a May Day demonstration, workers swiftly began facing arbitrary suspensions.

Two outspoken SIS officers in particular — Detiel Besta and Elmi — were removed from their work schedules. Outcries ensued, but only Besta had her work hours restored two days later. Upon her return she described experiencing a more hostile work environment. Besta stopped showing up because of it, with the intention of quitting. Elmi and Besta both received letters in the mail from SIS, firing them near the beginning of this month.

Workers were thrilled, however, when SIS posted a list of prayer rooms for use in mid-May, viewed as a “huge victory” by Elmi.

“This is proof that when we speak out, we can make a difference,” he said. “If we stick together and use our voices, we can work together for cost of living raises, no retaliation for those who speak up, and a fair path to form a union.”

Erin Sroka from Service Employees International Union 6 (SEIU) said it’s the most responsive the union has seen the security agency. Still, the lobbying group is pairing together with SIS workers to push for unionization. SEIU successfully lobbied in 2014 for Google to drop SIS.

This isn’t the first time SIS has been caught in malpractice crossfire. In 2015, Seattle’s Office for Civil Rights settled with SIS for violating the city’s Paid Sick Leave and Safe Time laws. Then, at the beginning of this year, SIS received heat from Seattle City Councilmember Lorena Gonzalez for its discriminatory practices. The subcontractor’s reputation proves hard to dismiss.

Even Councilmembers Kshama Sawant, Mike O’Brien, and Lisa Herbold showed up to speak at the May 23 rally against SIS in South Lake Union.

“Being a partner to our city means more than just philanthropy,” Herbold said, referencing Amazon’s self-proclaimed loyalty to helping the poor and making a difference with its wealth.

“Amazon needs to ensure both that employees have the justified belief that if they report abusive workplace conduct, that their claim will be properly investigated and addressed,” Clayton wrote in the letter, “and also that they will face no retaliation or recrimination, even if the investigation fails to support their claims.”

Bezos responded to a scathing New York Times piece a year ago by urging employees to report any abusive behavior but when push came to shove, he didn’t meet with SIS workers when they asked this year. Clayton also stated CtW received zero response from the tech goliath for almost a month now.

The Emerald has reached out to Amazon and Bezos but received no response. The CEO has also refused to meet with protesters.