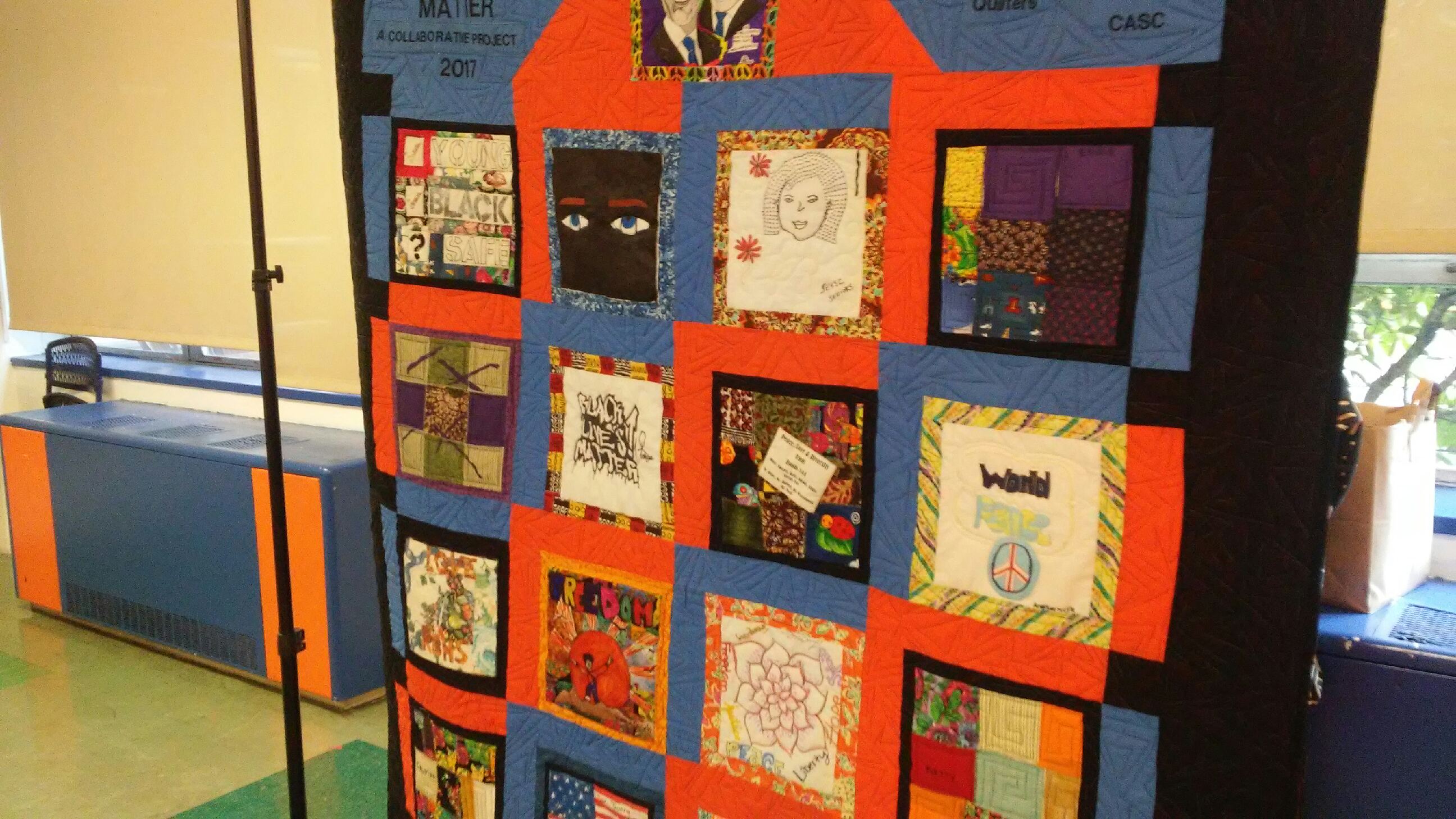 Over the span of 4 months, South End seniors and teens attempted to demolish the myth that collaboration between elders and youth was nigh impossible.

The small ceremony held in Rainier Beach High School’s activity room, featured teen and senior quilt makers speaking about their experience of working across generations to produce a piece of art very relevant to the national and local discourse around racial injustice.

“We came together to do this. More than anything it was the students who made this project what it is. They were so enthusiastic, even those challenged in their ability.  But they did a beautiful job, and today speaks to that,” said Luana Langford, a member of the Pacific Northwest African American Quilters (PNWAAQ).

The two quilts – featuring square patches created by the students including images of Dr. Martin Luther King Jr standing next to Barack Obama, and the words Black Lives Matter – took 3 groups, 8 work sessions from February to May, and the handiwork of professional quilter Laurie Gustafson to complete.

The idea for the quilt originated with Southeast Seattle Senior Center’s Community Engagement Coordinator Kate Harkins, who convinced the Center’s Executive Director, Lynda Greene, it was a worthwhile community project.  And with the help and support of Cheryl Haskins, Executive Director of City Ministries, the project emerged.

“We’ve wanted to collaborate with the youth in the area for some time, and we thought a project based on social justice would be perfect,” said Harkins, as she eyed the two quilts, hanging from a steel stand near the center of the room, approvingly.

Already on friendly terms with many of the women in the Pacific Northwest African American Quilters group, Haskins, who is also a member of PNWAAQ, solicited their involvement a no-brainer given the quilt’s theme.

With buy-in from the high school, Happy Hands and PNWAAQ, Harkins applied for a grant from Seattle’s Office of Arts and Culture to finance some of the materials as well as the services of a professional quilter that would be needed to top off the project.

Once the grant was approved, high schoolers set about drawing images serving as a basis for the quilts’ squares, the Senior Center’s Happy Hands quilters assisted them with actually sewing  and cutting the squares, and PNWAAQ did the quilt’s layout, design, and stitched the orange and blue sashing (Rainer Beach High’s colors) connecting all the individual squares together.  The professional then stitched together the backing of the quilt to finish the patchwork and voila: How to make a South Seattle quilt 101.

Of course given the quilt’s subject matter, working on it sparked several conversations amongst the students, according to Melissa Hancock, a Rainier Beach High art teacher who hosted the quilt’s work sessions in her second floor classroom.

“Our students really had a lot of conversations around how do we speak to this current movement and put some positive energy behind it,” said Hancock, pointing to a patch on one of the quilts that says, “Confused.”

“This came from students asking why there even needed to be a Black Lives Matter Movement. Some of them said it doesn’t make sense that it needs to exist. Each student was able to internalize their own feelings around it and what it means to them,” she said.

Hancock adds that there were also discussions for students who weren’t black about their place in a movement that is often framed in terms of black and white. Rainier Beach’s current enrollment is nearly 97 percent students of color, with Asian and Latino students combining to make up nearly 40 percent of the total student population.

“There were other students involved of different races who said: But this is about me too, so how is it about me? How do I fit into this conversation? That started a conversation that asked, what is Black Lives Matter versus All Lives Matter? Is that the same thing, how does it connect?” Hancock shared.

With the project being open to all students, not just those enrolled in her art class, teens interpreted the meaning of the movement in a variety of ways, according to Hancock.

Some personalized the message of the movement, with squares featuring them standing in front of the roaring rays of a sun. Others took it as a call for world peace, and the need for all to come together in trying times.

And others? “They just wanted to make something really cool,” said Hancock. “That’s the power or art. There’s not a wrong way or right way to do it.”

For Rainier Beach Junior Naj Ali, working on the quilt stimulated a sense of belonging.

“It’s beautiful to see the community come together because, as my teacher once said, there’s unity in the word community, so there is beauty in people who come together to accomplish a goal. In a world that’s always falling apart, and things keep going wrong, it’s good to come together and make beautiful things,” the soon to be high school senior said as she stood in front of one of the quilts she helped produce.

Patty Buckingham, of the Happy Hands Quilters, echoed the sentiment: “This is what it’s all about. This project spans age and ethnicity.”

And while all members of the alliance responsible expressed excitement at the prospect of working together again, an encore project might ultimately prove difficult due to school budget cuts.

Near the end of the ceremony, Gian Rosario grabbed me. He wanted to inform a reporter that Hancock’s art position will not be funded next year.

“We’re looking for grants and have also set up a Go Fund Me page to support an arts position for next year because a lot of students won’t be able to take art. It’s frustrating because we’re already a sports-focused school and if we cut the arts it doesn’t make sense. ”

With the Black Lives Matter quilts, one with an image of a flower bordered by the word hope, hanging in the background Rosaria continued his funding appeal for his teacher’s job; however, he and his fellow students had already made their strongest case yet that yes, art too, does indeed matter.

When not on tour, the Black Lives Matter quilt will be on display at the Southeast Seattle Senior Center located at 4655 So Holly Street.  For more information to schedule a tour, please call the center at 206.722.0317.

Marcus Harrison Green, is the editor-in-chief and co-founder of the South Seattle Emerald, the current scholar-in-residence at Town Hall Seattle, a former Reporting Fellow with YES! Magazine, a past- board member of the Western Washington Chapter of the Society of Professional Journalists and a recipient of Crosscut’s Courage Award for Culture. He currently resides in the Rainier Beach neighborhood and can be followed on Twitter @mhgreen3000