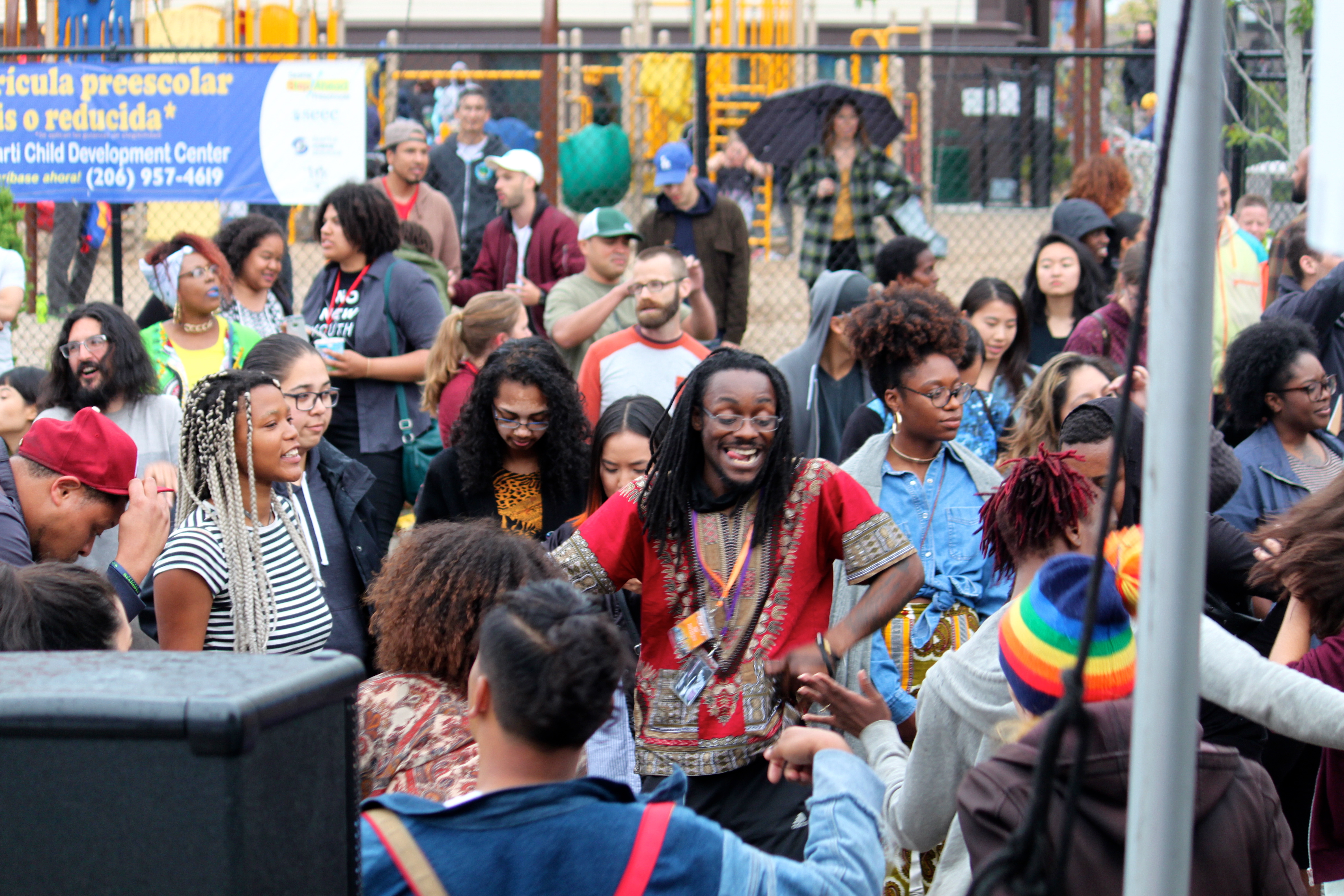 Last Saturday, thousands of people poured onto 16th Avenue north of South Lander Street in a gorgeous demonstration of solidarity, community expression, and love. The Beacon Hill Block Party at The Station coffee shop has been an annual occasion for years—“[It used to be] just four or five of us partying and trying to sell our wares,” Rob Castro, an artist and one of the original organizers, told me with a devious grin—but the event on Saturday was special even for Block Party veterans.

“I think it was the full realization of the thing we have been trying to do for the past seven years,” Matt Watson, one of the event’s current coordinators, said. “It showcased the excellence here [in the South End], for ourselves, but also for the rest of the city.”

Excellence of artistic expression was certainly on display Saturday. But perhaps even more moving was the crowd, which brought together people of different races, cultures, gender identities, and sexual orientations on a scale rarely seen in this city. It is little secret that the Station, since its opening in 2010, has become one of the most important centers of community support and activism in south Seattle for people of color and the LGBTQ community.

“The Station is a place where POC folks and LGBTQ folks and transgender folks feel safe,” Luis Rodriguez, who co-owns the shop with his wife, Leona, told me. “The fact that so many [people from these communities] are here means that we are doing something right.” This commitment to social justice and resisting establishment politics and priorities is apparent from the moment one sets foot inside the door (along with your coffee and pastry you can buy a political t-shirt or sign a petition). But it was writ large on Saturday.

From noon until night, audiences gathered at the main stage to watch a near unceasing performance as musicians, dancers, and poets did their thing. The enormous variety of acts included hip-hop crew Massive Monkees, rapper Essam, traditional Aztec dance group Ce Alt Tonalli, drag dance group Jade Dynasty, poet Leija Farr, and spoken word artist Nikkita Oliver, the latter of whom, of course, is running for mayor as a representative of The People’s Party. “I feel at home here,” said Oliver, who enjoys support from many Station proprietors and patrons. “There is a different kind of safety here than I feel at other political events. So many of the people here are facing the kinds of things that I’m running for mayor to change.” Indeed, looking around the Block Party, it was hard not to see the crowd as a concentration of her most devoted constituency.

Past the main stage, booths representing vendors and community organizations stretched the length of 16th avenue, selling t-shirts, jewelry, and other merchandise, and providing information on various community resources and institutions. Amen Gibreab, a local artist and documentary filmmaker, showed me the t-shirts he was hawking printed with the word “Marakey,” which means, he told me, “representing yourself truthfully without allowing yourself to be altered from the outside” in his native language of Amharic, a concept that had poetic resonance with the mission of the larger event. At Reclaiming Health Series, I spoke with Elizabeth Ortega, who is part of a grassroots organization of local healthcare professionals dedicated to empowering local communities around issues of physical and spiritual health. “We want to make health and wellness and healing accessible to people outside the confines of institutions,” she said.

Again and again, when I asked people why they had come to the event, they used the same vocabulary. “It’s an event centered around community, and especially important as it relates to communities of color,” said Negarra Kudumu, a local museum curator. “It’s one of the only functions that shows a diverse representation of communities in this city,” said a Station regular who identified himself as Fig. “I like the combination of the community coming out for social justice and celebration,” said Zoe Schuler said, who works for an organization dedicated to ending youth homelessness. “It’s a political space, but it’s also a party.”  Alaina Caldwell, co-host of the podcast “Hella Black Hella Seattle,” recalled coming to the event last year just after the release of her first podcast. “So many people were coming up to us and saying they had heard it,” she said. “We had to come back again to be part of this community.”

Towards the middle of the day, I headed over to nearby Plaza Roberto Maestra, the mixed-use affordable housing project of which The Station is part. I bought a plate of ceviche from Shark Bite, a regular food stand run by a man named Marcos Arellaño, that was some of the best I have ever had. He was passionate about his product, he said, because of its health, and because of the labor-intensive process it takes to make it, which requires chopping fish, cilantro, tomato, onion, lime, and avocado by hand. He hopes the business grows so he can hire more people—he would never use a machine. I asked him why he thought the Block Party was important. “Because it feels unidos,” he said. “United. Like a unit.”

In a city of skyrocketing rents, increased gentrification, and soulless tech expansion, it is sometimes tempting to surrender one’s imagination of what’s possible to the reality of what is. The Block Party disabuses one of that temptation. On Saturday, on Beacon Hill, thousands of people joined forces in a full-throated roar of resistance, declaring their bodies, minds, and creative spirits possessive of value apart from notions of profit or the market system. And it was a beautiful thing to see.