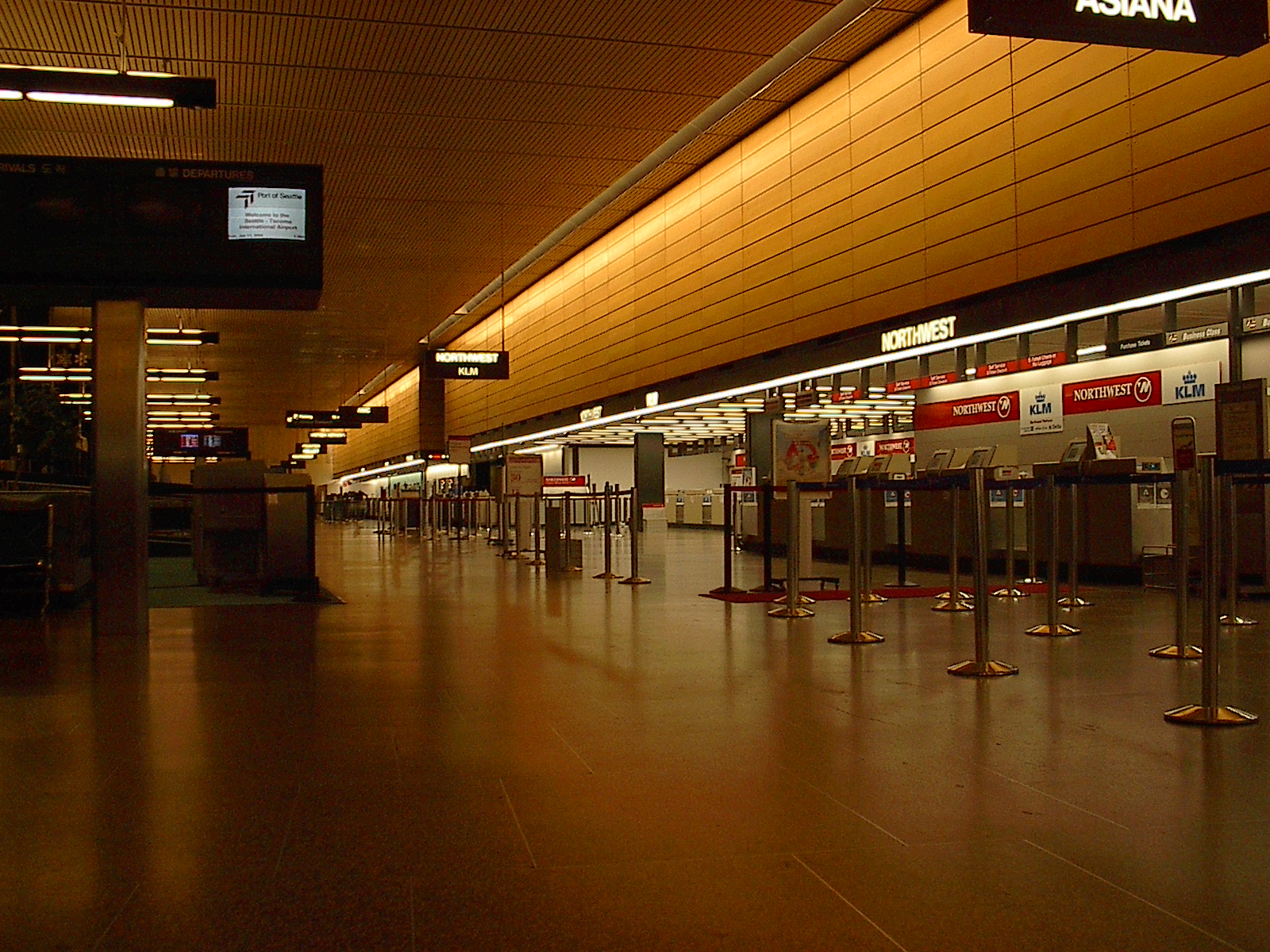 In a world-class airport, just outside of a world-class technology city, it’s still nearly impossible to find a place to plug in your laptop if you’re unlucky enough to have a layover in gates C, D, and N.  And then there’s the Wi-Fi, rolled out in 2009, which only recently got a much-needed connectivity upgrade that makes it possible to actually get anything done.

Despite technological advancements, SeaTac Airport still sometimes feels woefully analog, as passengers crouch on the floor to find power, fiddle with their phones to match QR codes with scanners, and stand in long lines to speak with ticketing agents.

As the main transportation hub for Microsoft and Amazon, not to mention Nintendo, Facebook, Google, Zillow, and Dropbox, it’s surprising that SeaTac hasn’t been quicker to adopt new technologies that benefit travelers and vendors in the airport. Or at least, if would be surprising if you weren’t familiar with the inner workings of the Port of Seattle, says Port Commission candidate Bea Querido-Rico, an engineer and former Port of Seattle employee.

“There’s a lack of direction,” she says, adding that “they’re trying to solve everyone’s problems.”

For years, the Port of Seattle has struggled to advance technologically while maintaining close connections to its working-class roots; talk of automation and new technologies like 3D printing that sound exciting and innovative to some just sound like lost jobs to many in the maritime and shipping industries.

A high degree of inefficiency—due in large part to inner systems of communication that are stuck in the 20th century—and the desire to reinvent the wheel has kept many projects from getting fully off the ground. And because of a lack of open and available data, the Commission and employees are frequently bogged down by audits and public disclosure requests that are good for the public, but poor for operations.

The Port’s Century Agenda, for example, is full of lofty goals—including ”meet all increased energy needs through conservation and renewable sources” and “increase workforce training, job and business opportunities for local communities in maritime, trade, travel and logistics”—designed to put up big numbers for the city, state, and the Port itself.

But it’s entirely reactionary to the current climate, says Querido-Rico. There’s no mention of planning for future technology, working with other agencies to provide support or infrastructure, or even addressing where this newly-bolstered workforce will live. In the short-term, there may be some increase in local earning, but in the long-term? Seattle may end up left in the dust due to a failure to plan for what’s next.

Amazon Go is a great fit for an airport terminal, she says, especially if they carry local products from women- and POC-owned businesses in the region. A farmer’s market featuring Pike Place vendors in the Sound Transit light rail station featuring quick Square or Google Wallet checkout for travelers on the move.

More compostable packaging in the concourse. Partnerships with local university researchers to develop and supply food, materials, and bio-med resources to space programs. Collaborations with Fred Hutch and other cancer researchers. Investments in asteroid mining to help take the pressure off mining here on Earth. And those are just a few suggestions.

Some resistance to change can also be chalked up to historical inability to square the culture and values of the Port and the private sector. And some of that is for good reason.

Tech jobs, while often believed to be universally high-paying, have been a major player in widening income gaps between men and women, between white workers and workers of color, and between high-earners and lower-earners. This is where our neighbors in tech differ from the Port.

By its own numbers, Amazon’s management is 75% male and overwhelmingly white; just five percent of managers are Black. Additionally, while software developers and other non-labor workers can easily make six figures, fulfillment associates (people who work in the warehouses)—who make up close to half of Amazon’s employees and are much more diverse—earn just under $13 per hour, or $27,000 per year.

Meanwhile, many Port jobs which require a similar level of experience and education are either represented by collective bargaining agreements—ensuring that they’re paid more, work more fair hours, and receive more comprehensive benefits—or are paid a competitive rate.

Unionizing workforces have shown time and again to be one of the most effective methods of combating wage gaps. Unfortunately, tech companies like Amazon have fought against efforts for collective bargaining—and it shows. A survey of salaries from January of this year found “women under 25 earning on average 29% less than men their age.” Among unionized workforces, the wage gap is about 9%.

Which means simply subbing coders for longshoremen without making other salient changes won’t solve the region’s problems—it’ll exacerbate them.

This isn’t to say that the Port has exactly been a great ally to workers; the current Port Commissioners lead the charge against SeaTac workers fighting for $15. Candidate Ryan Calkins points to Proposition 1 as a prime example of why the Port has failed to take on bold challenges: Money.

“They circled the wagons to support vendors,” he said. “If you’re receiving campaign contributions from airlines and airport vendors and they come out against a higher minimum wage, guess which side you’ll be on?”

Campaigning for Port is expensive work, which also tends to stifle innovation. Because all five Port seats are at-large, candidates have to appeal to all of King County—a population that, according to Calkins, is larger than 17 states.

That the Port is government agency—which means that unlike Amazon or Microsoft, it’s theoretically subject to the will of the people and the whim of the voters—is often forgotten, says Calkins, meaning there’s little incentive to answer to regular folks and their concerns.

“How has the Port escaped scrutiny on housing affordability and homelessness?” he asks.

Port Commissioners, after all, have to run for reelection, and this year, many are running on a desire to improve working conditions while expanding opportunities into new fields. Unfortunately, it’s as much a numbers game as anything else—and until voters and donors (like, say, tech companies) step up in a big way and demand that the Port look into apprenticeship programs and job training in new economy industries, it’s likely that the same old players will run the show.

If, says Querido-Rico, the Port wants to work with our local tech giants on initiatives including forays into aeronautics, exploration of AI and robotics, and even emergency preparedness for the region, they can set the terms and conditions, ensuring that these companies elevate both their hiring and environmental practices. But there would need to be political and public will.

The Port—with its immense amount of space, eager workforce, and channel of government cash—doesn’t need to open a low-paying fulfillment center on Harbor Island to get into the tech game. Instead, they need to get creative in their public-private partnerships to elevate both innovations and the income. Doing that will not only narrow earning gaps and alleviate massive social issues like poverty and homelessness, it’ll also help preserve our natural resources—all of which are ultimately a cost-saving measures, too.

“People and the planet at my two main concerns,” she explains. “Profits will come, but we shouldn’t be focusing on that. We need to plan for our people.”