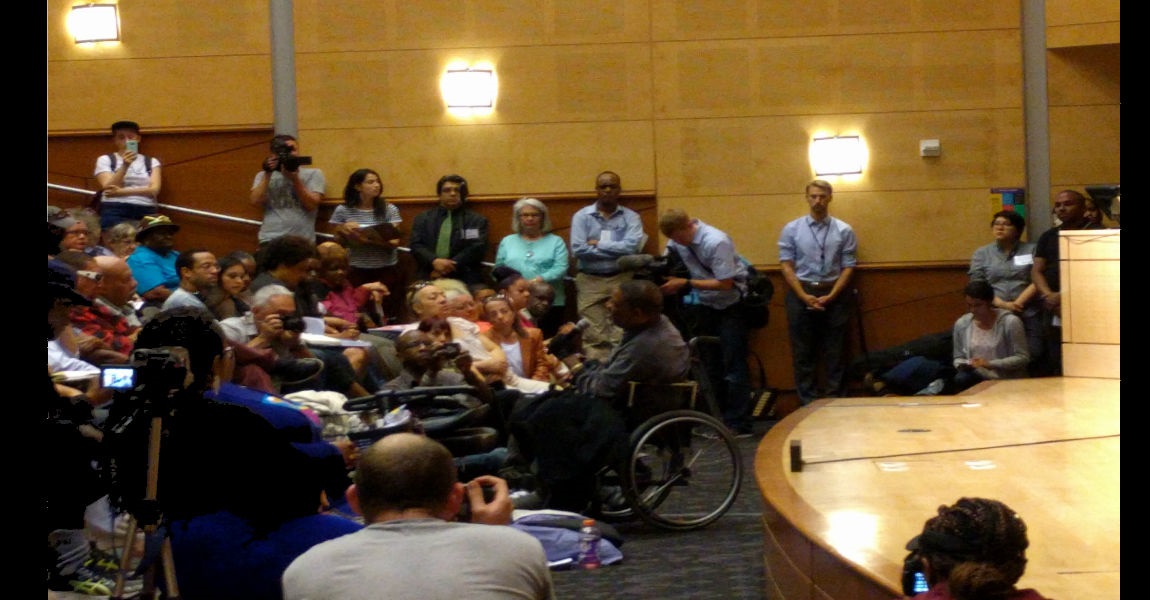 Tuesday, June 27, 2017. Nine days since Charleena Lyles was shot to death by Seattle Police Officers. Nine days since I, an African-American woman, started fearing the police in a whole new way.One week since I attended the vigil-turned-march from Charleena Lyles’ home at the Brettler Family Place Apartments and heard Councilmember Kshama Sawant call for this public hearing, a hearing unlike any I have witnessed before.

So many people filled Kane Hall that the balcony was opened and it was the first time since I started working at the University of Washington almost a year ago that the faces in attendance were not mostly white, were not split between college and middle age. The members of the City Council, seated as expected on the stage, were uncharacteristically silent. By acclimation, those in attendance agreed with the norms proposed by the Town Hall organizers that the members of Charleena Lyles’s family would speak first, and whenever they wanted to speak, followed in order by women of color, men of color, and then by any others who wished to speak as time permitted. The Councilmembers were given two minutes, each to speak at the end of the hearing.

And so, from her family we learned that Charleena was named after her father, Charles, Jr., and her grandfather, Charles, Sr., and that for nine days most of us had been mispronouncing her name. We learned that her four children were split, two and two, between families. We learned of the children’s joy in being reunited for a visit, and then imagined them traumatized, again, as the visit ends. Four children, torn from one another as surely at those officers’ bullets tore their mother away from them, witnessing her death, beginning their life without her, and denied the companionship and comfort of one another.

Then the women spoke.

I am fairly confident that at no time in the history of Kane Hall and the University of Washington – likely, no time in the history of the city of Seattle – have so many Black women taken the floor before their elected officials. Because the Black women – punctuated by a few Latina, Asian, and Native sisters in solidarity – sang, testified, declared their outrage, and, for two hours, told of our discounted lives in these United States. They called to remembrance others who have died at the hands of the SPD. They scolded the members of the Council – twice, it pains me to note – to put away their cell phones and attend to the constituents standing before them. They called on all the African American women in Kane Hall to stand. This was more than a moment of speaking truth to power. It was a moment of speaking power to power.

And yes, Black rage rightfully spilled over into the evening. I myself had found it hard to look at the faces of the white women seated on either side of me. One African American elder contextualized the assault against Seattle’s Black community using language that blamed Latinx immigrants. She was reminded from the family, from the floor, and from the facilitator that bigotry would not be tolerated in this space.

The Black men in attendance, whose voices have also traditionally been silenced in public spaces, who have been most often the target of police killings, protested they were not given their turn to speak, because the women had been given priority. And they were reminded, by the family, by the floor, by the facilitator, that we as a group had agreed to these norms, that this was not the end of the conversation, that Black men would have their say, but that this time, it was it was the women’s’ turn.

At each of these challenges the audience was hushed, as though their collective intake of breath had snatched the air from the room. Because there was truth in what each protester spoke. Distorted, manipulated truth, perhaps, but truth that had the potential to shift the hearing in some unintended way.

In the end, the hearing was a reflection of the impact of Charleena Lyle’s death on those who were closest to it – those who loved her in life, and those who could all too easily picture themselves sprawled lifeless in front of their own children. We, mothers and grandmothers and aunts and sisters, could keenly imagine her shock and pain at losing her life and her unborn child’s life at the hands of her protectors. We grieve, knowing that at the moment she felt most powerless, she wanted more than anything to shield her children from the horror happening before them. Because it was clear to all that, at the root, Charleena Lyles was a mother of children and none are more powerful nor more vulnerable.

When Charleena Lyles’s uncle asked all the African-American women to remain seated, and the rest of the audience to rise and give us ovation, the tears I had not shed since learning of her murder came forward. I reached out to clasp hands with the sister I had never met before, sitting one chair over to my left. I couldn’t see if the Councilmembers rose at that time. I hadn’t known what to expect when I decided I must attend that hearing. Certainly, I was not surprised that Police Chief Kathleen O’Toole was absent. Nor was I surprised at the Councilmembers’ lack of resolve to action. But I never envisioned this moment of recognition, this chance to mourn, publicly, and to be privileged in that mourning.

I didn’t know Charleena Lyles. I didn’t know her kids or her family. I don’t care about anything that happened before June 18, 2017. I just know that a Black woman, with some rumor of mental illness, called the Seattle Police to her home for help, and they shot and killed her.  She was denied dignity by the bullets that savagely ended her life. She deserves the dignity of justice.

Teddi Beam-Conroy has been an educator for more than 35 years, and currently is Director of the Elementary Teacher Education Program at the University of Washington in Seattle, Washington.  She is a mother of four and has one grandchild (and counting). She has called South Seattle home for the past three years, after moving to Washington from Texas.