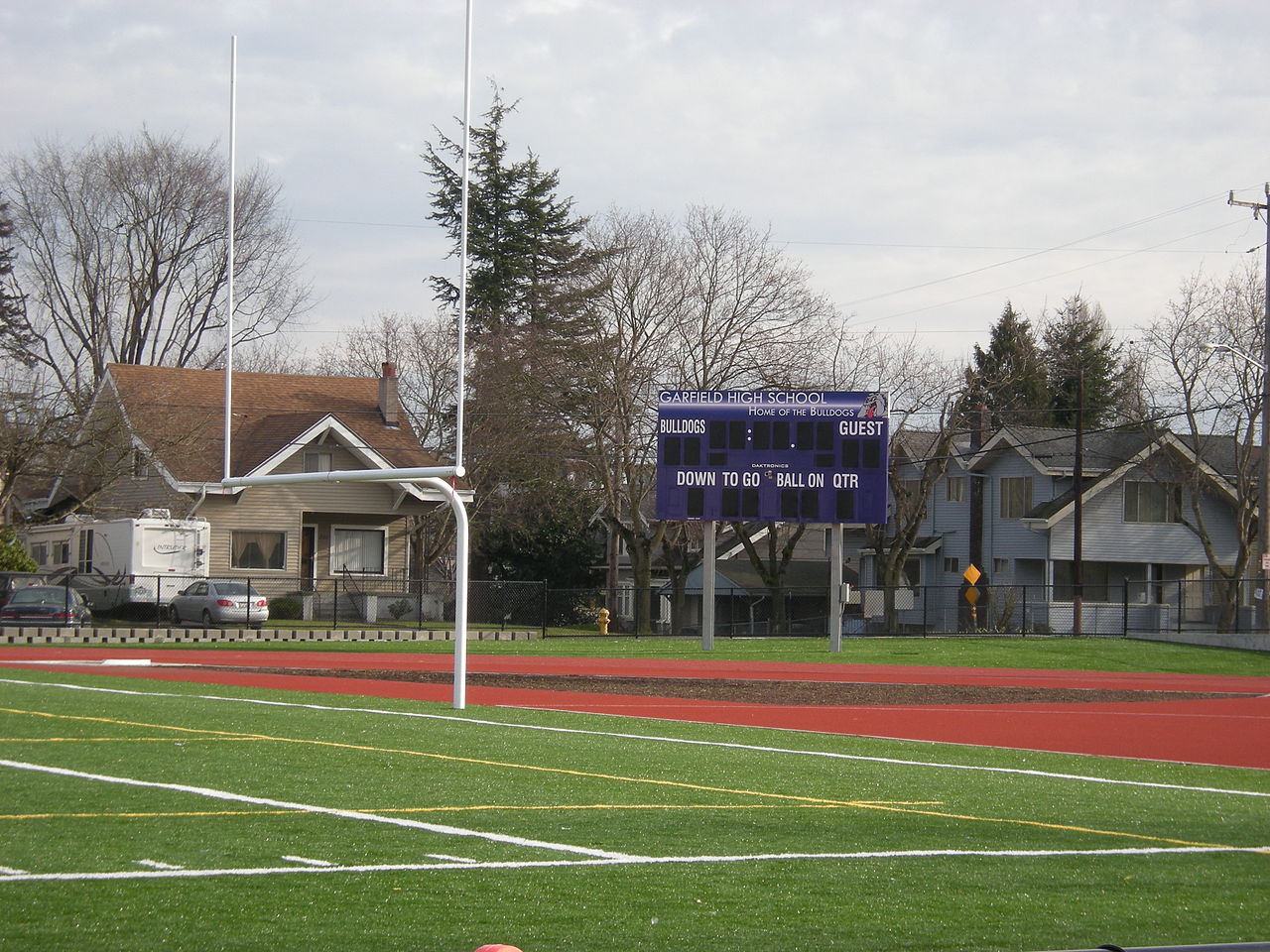 The Seattle Public Schools probe into whether Garfield High Football coaches improperly recruited two Texas teens may have officially ended more than a month ago, but public adjudication around the issue rages on.

The two youth in question both matriculated from Garfield High to Interagency in the Winter of 2017, after originally leaving Garfield in the fall of 2016 to return to their hometown of Beaumont, TX.

SPS’s original probe into Garfield was launched after 19 year old Will Sanders, one of the youth in question, claimed he was recruited to play football at Garfield during the summer of 2016.

During her comments to the board, Malone would blame the NAACP and “fake news” for denigrating her colleagues at Interagency, where the two Texas teen enrolled after their time at Garfield. She even accused the organization of being behind death threats directed at her colleagues currently supporting the youth and the teen’s themselves.

No stranger to fiery public testimonies, Malone referenced both Interagency principal Kaaran Andrews, and Marcus Harden. Both Sanders and the other Beaumont youth currently live with Harden.

In an email to the Emerald, Harden backed up Malone’s claims saying that Sanders had received death threats from various individuals since going public to the Seattle Times and KIRO news with his allegations against Garfield.

Harden adds that he did not originally disclose the threats to the District because he was able to mediate the situation directly with the individuals.

But as far as the investigation goes, he says it “was perfunctory at best and a joke at its worst.”

“In all of this who is asking how Will is doing?” He said.

The Emerald also reached out to Malone and Andrews for comment; however Malone has yet to respond and Andrews is vacationing out of the country for the summer.

While the NAACP had its own fiery rebuttal denying Malone’s claims at the following week’s school board meeting courtesy of the organization’s President, Gerald Hankerson, the comments also provoked some associated with the original case to come forward with more information, fearing they were being set up for another “witch hunt”.

John McKinney, the man originally responsible for bringing both Will Sanders and the other Beaumont, TX youth to Seattle, says he’s concerned at the prospect of Garfield Football coaches being dragged back into a media circus and wants to “end things before they start up again.”

McKinney, who first became aware of the youth through a mutual friend, says the two youth originally left Seattle in late 2016 to return to Beaumont.

This is why he says he was shocked after receiving a truancy letter postmarked March 29th 2017 which was provided to the Emerald. The letter was addressed to McKinney’s home in the name of one of the youth’s parents.

The native Texan said he personally told Garfield staff in November, including  the youths’ counselors, and school principal Ted Howard that the boys were going back to Texas for good and un-enrolling in the school.

Howard confirmed the conversation via email.

According to McKinney, after their fall 2016 stint at Garfield, Sanders and the other youth were enrolled at Interagency without his knowledge, though his name and signature appeared on their Interagency enrollment forms.

Within a day of receiving the truancy letter, McKinney visited Interagency’s Columbia City campus demanding to see the respective forms. He says he happened upon Sanders and the other youth in the hallway, however, he says both avoided eye-contact with him.

A heated discussion between McKinney and Interagency Principal Kaaran Andrews ensued, upon which, according to McKinney’s account, Andrews revealed that both Sanders and the other Beaumont youth were homeless but the school was attempting to find stable housing for them.

McKinney was then provided a copy of the second youth’s school registration form which contained McKinney’s forged signature in the parent/guardian section above that of Kwajalein Griffin, Garfield’s current track coach and a former Corrections Associate at Interagency, whom Sanders and the other youth stayed with during a portion of their time at Garfield, when it appears they bounced between homes.

An SPS spokesperson confirmed that proven signature forgeries on enrollment forms can lead to reports from Child Protective Services or revocation of enrollment.  However, as Sanders is now in the care of Harden, discipline for the incident seems unlikely. The district’s General Counsel had not previously been aware of the incident.

McKinney, who moved to Seattle more than five years ago and credits the city with saving him from drug addiction, says he demanded his name be removed from the youths’ registration as it was a forgery. According to him, Andrews swiftly complied with the request. It still remains unclear as to who brought the two students back to Seattle from Beaumont, TX and who forged McKinney’s signature.

Upon exiting the school, McKinney says he saw Sanders and the other youth speaking to Marcus Harden inside an office. Both youth would soon go on to reside with the Interagency employee at his house in Renton, WA with Sanders later going on to share his allegations to local media outlets.

Harden confirmed McKinney’s early April visit to Interagency, saying that McKinney shouted “I’m Will’s guardian, get my name off that shit cause I don’t want anything to do with this.” Harden says that McKinney seemed unconcerned with their homeless situation.

McKinney says Interagency never once contacted him about the status of either youth prior to his visit, and it was only after his Interagency visit that he learned the teens returned in early 2017, to live with Kwajalein Griffin, until she put them out of her house.

McKinney has steadily maintained that neither of the youth were recruited from Beaumont, TX, but came to the Emerald City to escape a troubled past, in an attempt to mimic the success of McKinney’s son Cameron, who similarly transitioned from Beaumont to Seattle.

The Emerald was able to confirm that prior to attending Garfield, Sanders was enrolled at Paul A Brown Alternative Center in Beaumont, TX.  As is the case with most alternative schools, it does not offer interscholastic sports, meaning Sanders had never played organized scholastic football prior to the 5 games he participated in as Garfield’s third-string running back during the 2016 season. The other youth who accompanied Sanders from Beaumont never suited up for the Bulldogs.

McKinney maintains that the investigation is the work of former Garfield football coach Derek Sparks, who he claims is feeding unfounded and damning allegations to the school district and media, in order to damage the reputation of coach Joey Thomas, along with the Garfield High football program, while steering players away to other schools. [Editor’s Note: Green and Thomas attended high school together]

Sparks, who is currently an assistant coach at Kennedy High School, coached the Garfield Bulldogs during the 2014 and 2015 seasons before resigning after an 11-8 record.

Sparks denied speaking to anyone in the media about the case including the reporter who did the original article, or having anything to do with the investigation or Thomas, in a brief phone call with an Emerald reporter.

In an interview, a current Garfield football player says he later met with Sparks, his former coach, who told him he would connect the youth with the Athletic Director of Rainier Beach High School to possibly transfer to the school.

The Emerald was able to confirm that at least three players who were on last season’s Garfield Football Team participated in Rainier Beach High Football teams spring drills, including Will Sanders.

The youth, who provided additional texts from Sparks, says that he eventually grew uncomfortable with their ensuing conversations, declining Spark’s offer. He also says Sparks prodded him to talk to local media about Garfield in an unflattering way, with Sparks himself reaching out to local media members, something the coach already denied to the Emerald.

Sparks did not return a request for comments on the meeting.

The youth says while he is still congenial with Sparks, but his parental figures do not trust the coach and told the youth to cease contact with him. The teen also says he and his teammates grew tired of reporters constantly reaching out in an “attempt to dig up dirt on the school.” And says it continues to be uneasy that reporters somehow have access to the unlisted personal cell phone numbers of Garfield youth.

“I mean if they find something fine. But I just really want this to stop. It’s not fair to us.”