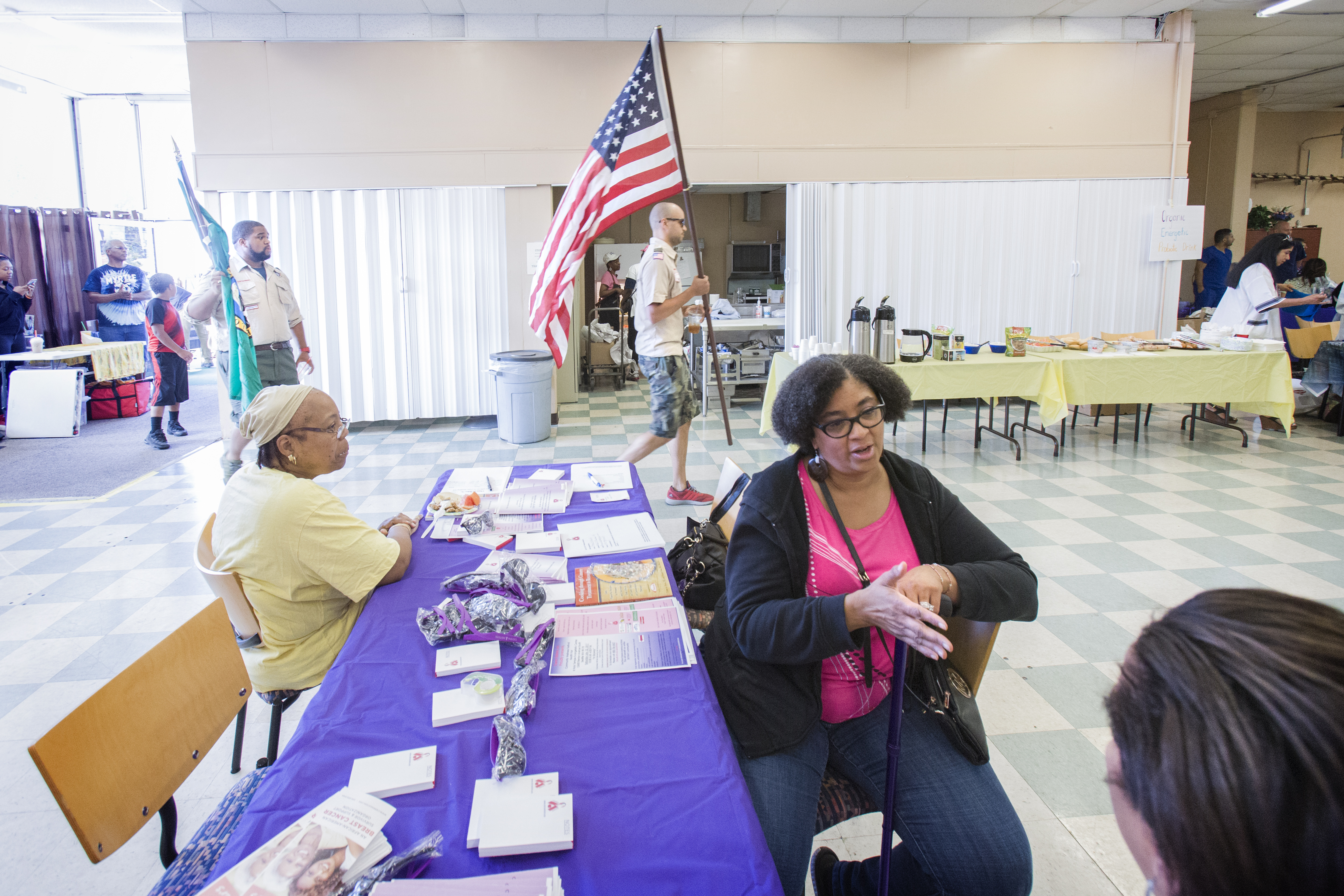 (This post was originally published on FredHutch.org and has been reprinted with permission)

It’s no surprise that there are health haves and have-nots in our country, particularly when it comes to cancer.

The health haves have money, insurance, socioeconomic and even geographical advantages on their side.

They may reside in rural or suburban areas with few doctors, much less a cancer treatment center with all the latest therapies. They may live in “food deserts” where fruits and vegetables are inaccessible or “food swamps” where junk food — and obesity and all of its related diseases — are the norm. Maybe they’re afraid to go to the doctor because they mistakenly believe all cancer is a death sentence or they’ve experienced racial bias from their health care providers. Maybe they don’t speak English so can’t decipher crucial cancer prevention messages.

No, the surprise isn’t that health disparities are so prevalent that our most vulnerable populations — the poor, the elderly, ethnic minorities and such — are more likely to die after a cancer diagnosis than, say, middle-income whites. The surprise is that these well-documented health disparities have gone on for as long as they have.

But change is afoot. Four leading cancer organizations have joined forces to decry these longstanding disparities and call for a collaborative effort to ensure cancer research benefits all patients, regardless of race, ethnicity, age, gender, income, education or the communities in which they live.

On Monday, a group representing the American Association for Cancer Research (AACR), the American Cancer Society (ACS), the American Society of Clinical Oncology (ASCO) and the National Cancer Institute (NCI) released a position statement, “Charting the Future of Cancer Health Disparities Research.” It spells out why cancer health disparities continue to drive late diagnoses and bad outcomes for so many and offers an ambitious list of needs, priorities and recommendations — a research roadmap, if you will — to help even the playing field.

The paper was published simultaneously in AACR’s journal, Cancer Research; ASCO’s Journal of Clinical Oncology, the ACS’s CA: A Cancer Journal for Clinicians and on the NCI’s website. Its authors — leaders in clinical research, public health, epidemiology and patient advocacy — are members of a think tank created two years ago to foster better cooperation across the cancer research community.

“As far as I know, a partnership like this across these organizations is unprecedented,” said Dr. Christopher Li, a public health researcher with Fred Hutchinson Cancer Research Center, and a co-author on the paper. “It speaks to the importance of the issues involved that all of these organizations would make it a priority to come together and publish a statement with a unified voice.”

Getting granular about patient data

The expansive report addressed a wide range of issues and potential solutions. One of the biggest stumbling blocks in health disparities research, the report concluded, is data. There’s not nearly enough of it and there’s no consistency with regard to what’s gathered.

Patient data is frequently spotty or oversimplified. Questions about socioeconomic status or health literacy often go unasked. Large biospecimen banks devoted to people of color are nearly nonexistent.  And even some of what is gathered isn’t necessarily all that useful. Overarching categories like Hispanic, Asian and African-American don’t accurately reflect our blended society, Li said, nor do they offer the kind of genetic insights that could better guide health choices and cancer treatment.

”The field of health disparities as it relates to cancer has evolved,” he said. “It began with looking at ‘black-white’ differences, but it’s become so much more nuanced as we’ve started to really appreciate all the diversity that exists in our country.”

Within given racial/ethnic categories, for instance, the data need to be more granular. An umbrella term like “Hispanic” might include someone of Mexican descent, Cuban American descent, South American descent, a third generation Hispanic American or a recent immigrant, he said.

“Race and ethnicity are social constructs,” he said. “And there can be quite a bit of heterogeneity within broad racial groups. Someone may self-identify as part of one group but there’s a genetic piece that allows us to really see where their ancestry falls and how that relates to cancer incidence and cancer outcomes and survivorship.”

Today, cancer researchers and clinicians need to look not only at race but at ethnicity, socioeconomic status, neighborhoods, ancestry, immigration status and lifestyle factors. They need to dive deep, asking questions about everything from literacy to gender identity to the availability of healthy food.

“We need to appreciate that disparities can be defined on multiple levels,” he said, “as factors on the individual, neighborhood, county, and state levels can all play a role.”

Gathering this level of granular data is crucial because health disparities can be driven by both biological and social determinants, Li said. Knowing more about people’s ancestry may give them an edge when it comes to fending off cancer, not just with regard to inherited cancer mutations but in terms of biology, like the way our bodies responds to the foods we eat.

As Li and his co-authors point out in their new paper, research has shown that African-Americans living in the U.S. have a high risk for colorectal cancer, whereas blacks who live in rural South Africa do not. In the U.S., 65 out of every 100,000 people are diagnosed; in South Africa, it’s less than five out of 100,000. These disparities have primarily been associated with diet (blacks in the U.S. eat more animal fat and less fiber), but an international study, published in 2015, offered further insights.

The scientists recruited participants from both groups, gathered samples of their gut microbiota — that teeming community of bacteria, viruses and other microorganisms that helps our bodies break down food and can influence our risk for diseases like cancer — then swapped their diets: the African-Americans ate a typical high-fiber South African diet, and the South Africans switched to a typical U.S. diet with high meat and fat intake.

“This shows the dynamic nature of the microbiome, how sensitive it is to diet and how those diets could affect colon cancer incidence,” Li said. “There’s a lot more research to be done but it points to trying to identify why we see different patterns of cancer in populations that have similar genetic ancestry and how potentially modifiable exposures like diet can have a real impact on cancer risk.”

Research that reaches everybody

According to statistics from the National Institute on Minority Health and Health Disparities, Hispanic and Latino Americans make up less than 8 percent of enrollees in clinical trials, even though they make up 17 percent of the population. African-Americans represent 13.2 percent of the total U.S. population, but the FDA cites a 5 percent involvement in trials. All told, non-whites make up less than 5 percent of participants in clinical trials supported by the National Institutes of Health.

As a result, researchers aren’t able to gather valuable data on how minorities respond to potential new therapies (not everyone responds the same), and minority patients aren’t able to access new treatments that could potentially save or improve their lives.

Fear and mistrust of doctors is part of the problem (the Tuskegee Syphilis Study still haunts many), but there are other factors at play. Clinical trials are often conducted at large research institutions or hospitals so may not be as accessible to rural residents. Individual trial criteria can sometimes exclude patients, such as those with additional health issues or “comorbidities” like obesity, diabetes and/or other cancers (more commonplace in blacks). Underserved groups and/or or non-English speakers may not hear about studies in time to enroll or may have to drop out early due to economic constraints. Medical centers that serve minority patients may not have the capacity to support all the activities associated with conducting trials, such as providing more frequent exams and collecting more blood and tissue samples.

The four organizations called for a number of strategies to remedy these issues:

Fred Hutch’s Health Disparities Research Center, or HDRC, is already doing much of this.

Thompson and her team, for instance, worked directly with members of the Yakima Latino community to tailor cancer prevention messages. As a result, they increased breast cancer, cervical cancer and colorectal cancer screening in this group.

“Go in search of people, begin with what they know and build on what they have,” Thompson has said of her approach. “If you want to change behavior of people who are underserved and oppressed, you need to work with people where they are.”

Li noted the Hutch has been “one of the leaders” in this area.

“What we’re calling for in this paper is to develop a set of best practices to help engage other centers in these activities so they can achieve successes like the ones we’ve had here with our community partners,” he said. “It’s always good to put a face on research.”

How will the cancer research community respond to these recommendations?

“It will be interesting to see what the response is,” said Li. “The individual organizations, like AACR, are very committed to promoting research on health disparities. AACR organizes an annual conference on cancer disparities and I’m co-chairing this year. These new recommendations are guiding the planning of that meeting.”

The recommendations could also help guide policy changes, which, he said, can be an effective way to quash health disparities. The state of Delaware, for example, completely erased its disproportionately high rate of colorectal cancer deaths in African-Americans by passing legislation that provided full coverage for colon cancer screening.

“Policy changes, providing financial resources to do the things we know can save lives, these things can have a real impact,” he said. “They can be remarkably effective.”

Diane Mapes is a staff writer at Fred Hutchinson Cancer Research Center. She has written extensively about health issues for NBC News, TODAY, CNN, MSN, Seattle Magazine and other publications. A breast cancer survivor, she blogs at doublewhammied.com and tweets @double_whammied. Email her at dmapes@fredhutch.org.