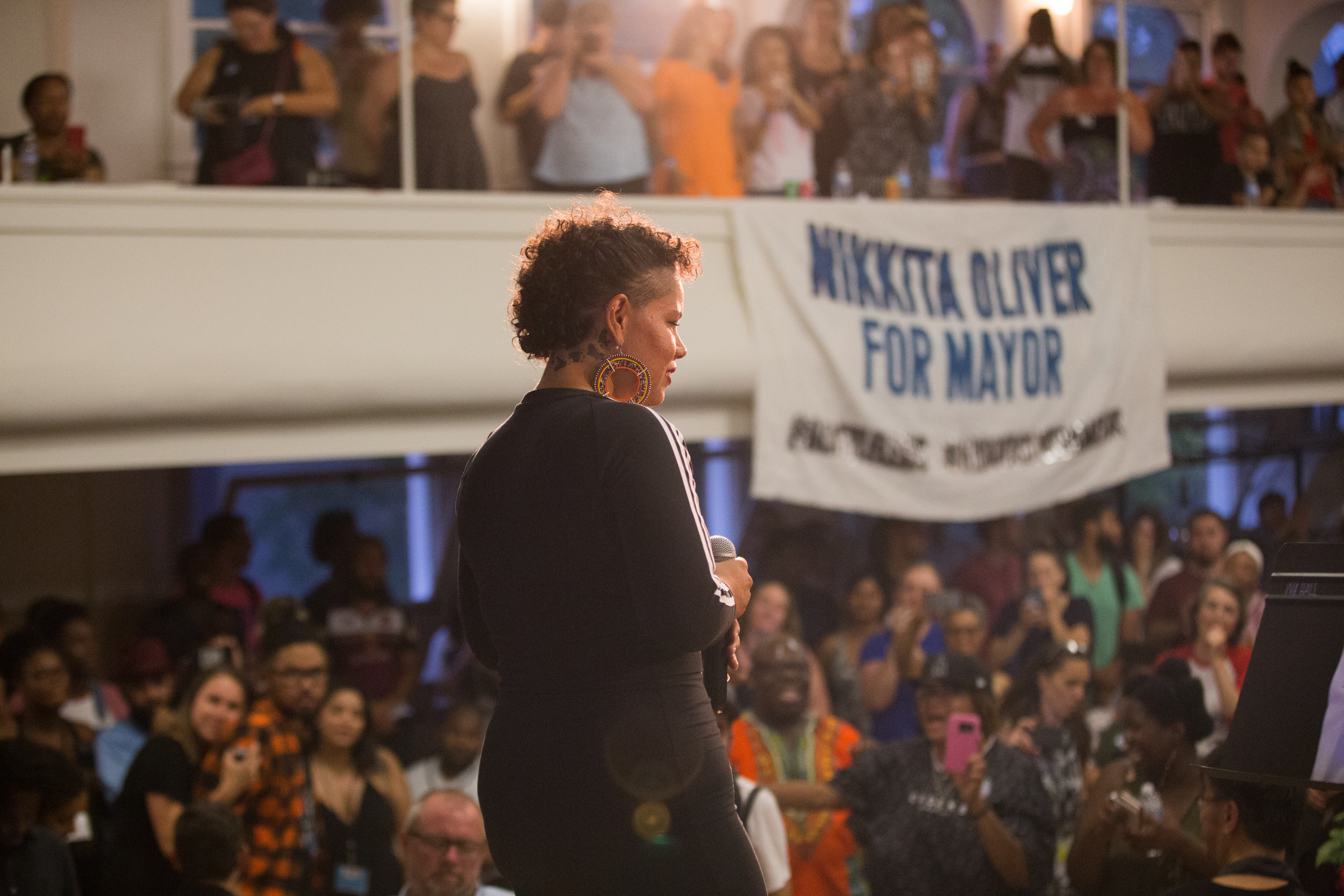 After a months-long mayoral primary campaign where 21 candidates vied to replace the outgoing Ed Murray, Seattleites received a clearer picture of the two candidates competing in November’s general election. With 184,928 ballots counted,  former U.S. Attorney Jenny Durkan, widely seen as the front-runner, is a shoo-in for the next round taking 28.09 percent of the vote.

Though Durkan’s challenger was initially unclear at the close of Tuesday night’s primary election, with Stranger endorsee Cary Moon and Seattle Weekly endorsee Nikkita Oliver locked in a tight battle for second place, Moon’s lead over Oliver expanded in the ensuing days, but has retreated somewhat as of Monday afternoon.

As it stands, Moon possesses a 1,664 vote advantage over Oliver with a few thousand votes still to be counted, according to King County Elections.  A representative for the county’s elections department said that the count of all verified ballots should be completed by Monday evening.  If the margin between Moon and Oliver’s final tallies is less than 2,000 votes a machine recount will be required. Final results will be certified on August 15.

In an attempt to narrow the current gap, the Oliver campaign is urging its supporters to verify that their ballots were counted and not disqualified by King Count Elections.

The placement of Durkan, Moon, and Oliver guarantees that Seattle’s next mayor will be a woman, something the city has not experienced in more than 80 years.

Oliver, who is lives in South Seattle, spent Tuesday night rallying supporters at a campaign event in Washington Hall.

Showcased at the gathering was a grassroots campaign fueled by volunteers, small donations, and community organizers, featuring an intense line-up of local performers and a multitude of  local activists. Among them were Block The Bunker, No New Youth Jail, Black Lives Matter, union, LGBTQIA+, Indigenous, and No Justice, No Pride activists.

Addressing the crowd, Oliver expressed wanting everyone to remember how communal the event was rather than concerning themselves with the incoming election results. By the end of the night, it was still unclear if she would be breaking through to November.

Matt Remle of the Lakota Tribe dubbed Oliver with a name meaning “the woman who stands with the people.” The room remained incredibly humid, with attendees using plates as fans to combat the sweltering heat.

Bright pink shirts with the words “Queers for Nikkita” sprinkled the crowd. Donning one of them was an enthusiastic Santa Anigo.

Anigo took it upon herself to do some groundwork for the mayoral candidate, but wasn’t an official part of Oliver’s campaign.

Tammy Morales, who ran for the District 2 Seattle City Council position last year, called Oliver’s run a “political awakening” and that “serving the vulnerable in our community is the pillar of [Oliver’s] campaign.”

“I don’t like [Oliver] on a personal level,” Mustafa said. “But when I saw her views, I had to support her. So many things are going on that Seattleites don’t want to address because they’re doing well. At least Nikkita’s trying to make a difference.”

Mustafa said Oliver’s approach to police reform and homelessness, among other things, secured her vote. A Seattleite since 1998, Mustafa has grown tired of Seattle’s current state, saying it’s full of greedy people. Americans are now unrecognizable, she claimed.

“I’m pretty jaded about this place,” Alcantarn said, noting he’d been laid off three times in the past year. “This campaign has made me love Seattle for the right reasons. It used to be for tall buildings, sports, Cascada. [The campaign] is a really good example of everyone I love and the work that needs to be done.”

62-year-old Mary Flowers, who urged Oliver to run in the first place, possessed similar sentiments. She had never attended a candidate’s party because there never felt like a reason to party, according to her.

“Nikkita doesn’t talk, she listens,” Flowers noted. “She sets the standard for what elected officials need to be.”

Around 9 p.m, the crowd reached Washington Hall’s maximum capacity. They were bonded by an electricity in the air.

Commanding the stage, Oliver spoke and sang to them, laying out a vision of Seattle’s future: where a restored Duwamish River flowed, lush green landscapes remained, transportation operated reliably, everyone had shelter, and money was no barrier to opportunity.

“We must all move through the sometimes painful process of equity,” Oliver said, after singing

The crowd exploded. Feet stomped and rattled the ground, with thunderous claps and yells echoing through the hall.

“Talking unapologetically about the things that matter to us, if that’s not change, I don’t know what is after the [presidential] election we just had,” Oliver said, reiterating that the movement mattered more than votes.

The first-time candidate then insisted voters go out and continue organizing after the election is over, and demanded nobody give in to political apathy. She announced they were not updating the crowd about polls because Oliver wanted the crowd to take home the feeling they got within the crowd last night, a feeling of community and empowerment.

There were multiple moments when Oliver let her words sink in for emphasis as her eyes scanned the crowd. “Sometimes I’m just taking in what the responsibility means to do that,” Oliver said of her candidacy because it was urged by her elders. She feels honored to run with so much support, and noted that hearing people chant for her gave some sense of an overwhelming, but humbling, feeling.

Oliver additionally had faith that more community organizing will ensue.

“There’s some folks in our community who don’t have a choice,” Oliver said, noting that others will follow the call to action at the behest of their elders. “For me, serving my community is always the right decision.”

Moreover, Oliver felt her campaign raised some new tactics and skills for organizing. She pointed to a new base of supporters and new founded relationships.

The voter turnout for Seattle, however, was low. Only approximately 25 percent of King County’s registered voters weighed in on the mayoral election, despite the county forecasting a participation rate of 38 percent. Less than 40 percent of Seattlites turned out for the vote, but Oliver felt no animosity. She said there are many barriers to casting votes, and felt the presidential election took a toll as well.

What she is interested in, however, is the demographics of those who did vote. She wants to see if people who typically don’t turn out did, and if voters were more proportionate to Seattle’s diverse population than in years passed.

But all the uncertainty didn’t dampen her mood on election night.

Other races on the night saw South End business owner Pat Murakami finish second to incumbent Lorena González in Seattle City Council’s Position 9 primary. Though González finished with more than 62 percent of the vote and is widely expected to retain her seat, Murakami said she’s encouraged for the general election after receiving nearly 20 percent of the vote — a better showing than González’s previous primary challenger.

“I really think that once people hear my message, they’ll support me,”  Murakami said in a primary night interview. “It seemed like most people thought position 9 was a foregone conclusion and so there weren’t any debates and only one forum [during the primary]. People are tired of the heavy tax burdens the city is imposing, and also tired of our council working for developers. They want a council working for the actual voters.”

In the other city council primary, labor advocate Teresa Mosqueda secured a spot in the general election, taking  more than 31 percent of the vote. Her general election challenger will be tenants right activist Jon Grant, who lives in the Brighton neighborhood.

Countywide, the current King County Executive Dow Constantine dominated his primary again, taking 76 percent of the vote, as expected. Bill Hirt finished a distant second. Notably, “No New Youth Jail” received several write-in votes, referencing the movement that has raged against the construction of King County’s Children and Family Justice Center for the past four years.

In a potential sign of property tax fatigue, the polarizing sales tax for cultural arts programs (Proposition 1) appeared on its way to rejection by voters as it currently sits at 51.69 percent nay, as of Friday afternoon. The gap between yeas and nays has been closing in successive days, however.

As the primaries came to a close Tuesday night, those left on the outside looking in reflected on their campaigns.

“No one gave us a snowball’s chance in proverbial hell,” said Bob Hasegawa, speaking at his election night party from his Beacon Hill home. “Whatever the numbers might be, we ran a campaign that returned hope to the political process. People responded to our message of returning power to the people and that’s going to endure.”

Hasegawa, who currently sits in fifth place and who has yet to concede, is not expected to endorse Durkan for mayor.

Maurice Jones, a Hasegawa supporter who attended the state senator’s election night party, summed up the sentiment for many Seattleites (at least those in the South End) when asked if he’d experienced a mayoral primary like the one that had just transpired.

“I’ve never seen anything like it while I’ve lived in Seattle,” said lifelong-Seattleite Jones. “It was crazy.”

2 thoughts on “Election Results: Durkan Poised for General, Moon and Oliver in Tight Race for Second in Mayoral Primary”