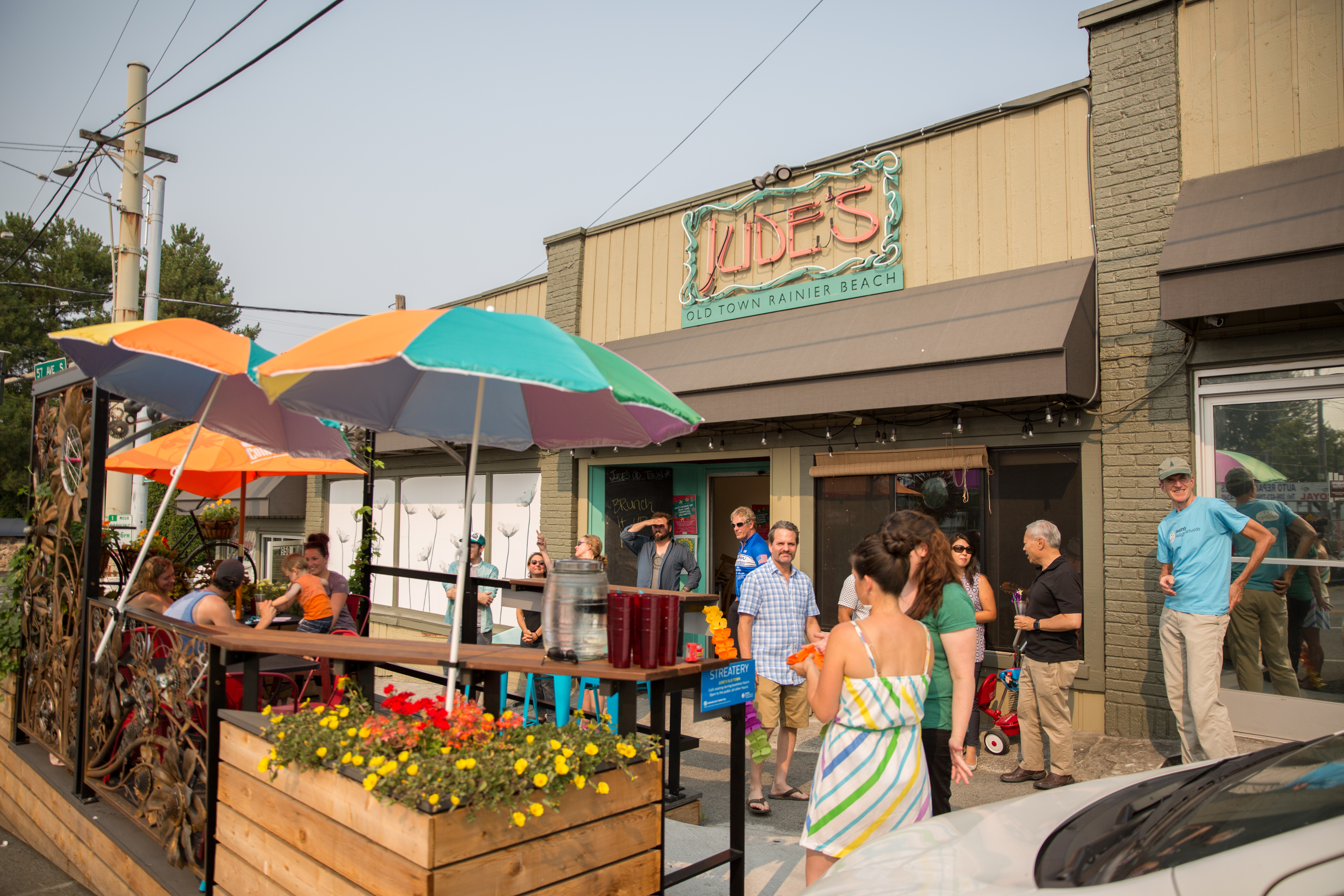 On Sunday afternoon, with guitarists Ken Carlson playing in the background, dozens of neighborhood locals gathered at a compact floral and bicycle themed parklet located in front of Jude’s Old Town for a ribbon cutting ceremony. Whisky slushies, a classical guitar jam session, and jovial residents in unrepentant weekend mode made for a festive atmosphere as Rainier Beach celebrated its first-ever “Streatery” parklet.

Part-dining space, part art installation, the metallic and wood construct, which officially opened in early July, came together after a year-long effort from a coalition including community group “Friends of a Rainer Beach Streatery at Jude’s”, the Seattle Department of Transportation, VIA Architecture and the Rainier Valley Community Development Fund.

The assemblage was able to obtain a grant from the Seattle Department of Neighborhoods that financed construction, in addition to donations of time, money, and material from local businesses and non-profits.

Rainier Beach’s newest amenity was long over-due according to Jude’s co- owner Beau Hebert, who had the initial idea for it after growing tired of the dearth of public community spaces in the area.

“Other areas of the city have long had places for neighbors to sit and relax. Those public parklets are really what operate as incubators of community. It makes no sense for them to be concentrated mostly north,” says Hebert, who’s lived in Rainier Beach with his wife Courtney for nearly two decades.

Its capacity to serve as a galvanizing hub for the neighborhood’s diverse community -roughly a third African-America, a third Asian, a fifth white, and  fifteen percent Hispanic- was the primary reason behind the Streatery , according to Jude’s other co-owner.

“We really wanted somewhere that attracted people regardless of age, and whether you need to take a break from walking or bicycling by Lake Washington,” says Courtney Hebert while plunging a bicycle shaped “crazy” straw into a Jude’s Old Town patron’s slushy.

For residents calling Rainier Beach home their entire lives, having a Streatery parklet similar to those present in Capitol Hill and Ballard, was egregiously overdue.

“I remember walking this same sidewalk fifty years ago when nothing was here, and now, seeing this, knowing people can grow up expecting beautiful public spaces here in Rainier Beach is such a great thing,” said Wayne Lau, who went to high school in the neighborhood nearly 50 years ago.

Those who had a hand in construction also felt pride on the day.

“My favorite thing about it is that it has joy contained in it. It could’ve been very modern looking and bland, but it really has been brought to life,” says Katherine Calvert , whose firm VIA Architecture helped craft the parklet’s design.

For Anna Sher, who donated her skills in crafting the Streatery’s metal work forging donated materials into bicycle and flower shapes, the challenge of combining both in an art installation was too much to pass up. “When I heard bicycles and botanicals for the them, It immediately sparked my interest. This was a really fun project,” says Sher.

She later joined the Hebert’s, and the Department of Neighborhood’s Ed Pottharst to cut the ribbon and officially welcome the Streatery to the neighborhood. Though it had been open for nearly a month, Beau wanted it to “settle into” the area.

While the City of Seattle is the owner of the space, Jude’s Old Town will operate it, serving patrons who opt to it outdoors. So far, Beau says, the community response has been overwhelmingly positive.

The Streatery is the second parklet to open in South Seattle since 2015, as Hillman City currently has one located in front of Tin Umbrella Coffee. Should the resident enthusiasm displayed on Sunday carry over to surrounding neighborhoods, another should be close behind.