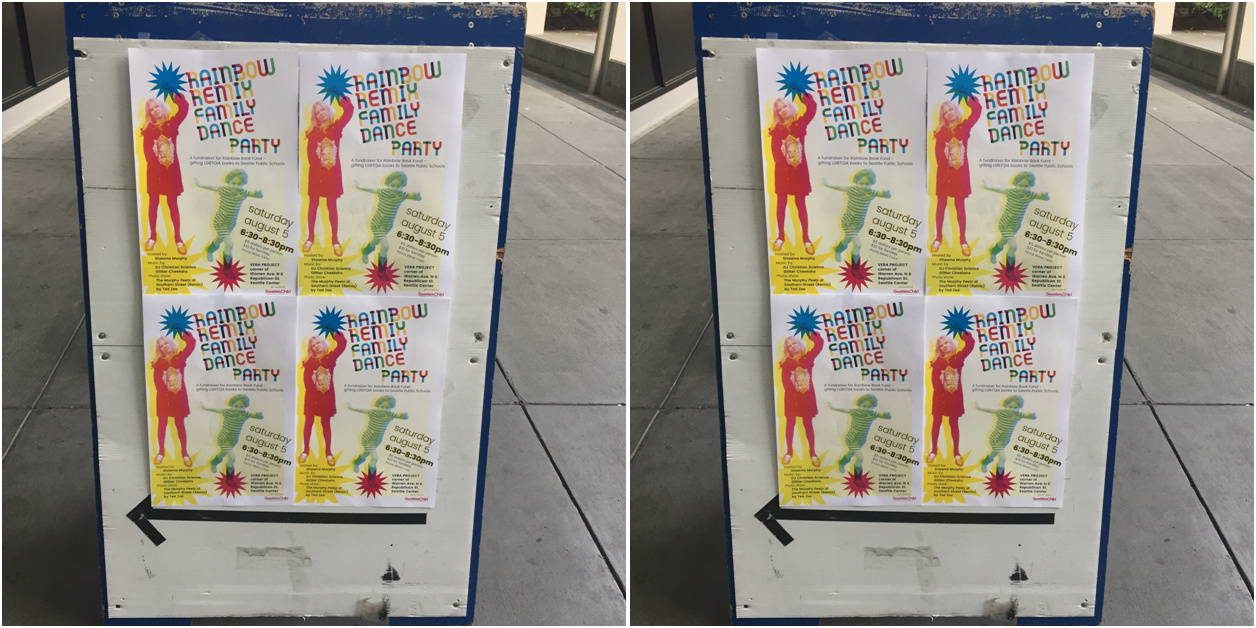 I grew up in a household with two moms who were constantly searching for good stories. They especially sought out books featuring families like ours so my sister and I wouldn’t feel so different. What better way to kickstart our collection of LGBTQIA+ books than the first ever book of this kind published?

Heather Has Two Mommies was released in 1989 and was only offered in black and white with a color cover. We accumulated more books from there. However, our assortment was topped off at fewer than a dozen on a bookcase full of other children’s stories.

While this may seem like a pathetic attempt, it was actually quite an accomplishment considering that our elementary and middle school’s whole library had just about the same amount, if even that many. South Shore Pre K-8, along with most other Seattle Public Schools (SPS), had the “All Families Welcome” sign, but just didn’t deliver in their library. How are LGBTQIA+ kids and kids from non-traditional families supposed to feel welcome if we aren’t represented in the books our schools offer?

Shawna Murphy had the same question. Murphy found the lack of LGBTQIA+ books in SPS unacceptable, having a lesbian daughter of her own, so she took matters into her own hands.

And the Rainbow Book Fund was born. The purpose of this fund is to get LGBTQ+ books in the hands of SPS students, in their libraries, and in their classrooms. The distribution of this literature will hopefully lead to the destigmatization of queer families and kids.

But how to raise such funds? Host a dance party of course! Murphy reserved the Vera Project for a Saturday evening and began preparations for her Rainbow Remix Family Dance Party.

Bands were booked and donations were collected for a raffle. Donations included an ice cream party at Full Tilt, aromatherapy from Starjuice, pilates at Bodycenter Studios, homemade bread from Crown Hill Crumbs and much more!

On the night of the event, Vera was transformed into a magical rainbow land of fun. The black dance floor was littered with giant pink balloons being straddled by children. The ceiling was strung with green ribbon and blue paper decorations. The stage was lined with bunches of bright heart and star-shaped mylar balloons. Attendees arrived sporting their best colorful outfits, with rainbows head to toe, ready to get down for pride and representation.

The celebration continued into the lobby where photos by local photographer Ted Zee told the story of the Murphys and their LGBTQ+ journey through life and school. Party goers were also free to capture their own stories in front of a gold sparkly backdrop at the photo booth.

My band, TriSiren, got to kick off the evening of festivities, followed by another local band, Glitter Cheetahs, and DJ Christian Science provided jams to dance the rest of the night away.

This event was so important because one of the main ways children learn about the world and the people living in it is through books. If the only kind of people kids read about have a white mom that birthed them, a white dad that helped, a birth brother and a dog, then anyone else, including themselves, that deviates from this model will appear as strange.

In Heather Has Two Mommies, the reader meets Heather’s classmates who display a variety of types of families. Some have single parents and step-parents, one has two dads, one was adopted along with his other siblings, and they are all proud of their families.

Underrepresentation is a form and tool of oppression. It comes in many forms, from TV to textbooks to news stories to children’s stories. It affects all disadvantaged groups in differing intensities and manifestations. The more we share our stories, the more we are seen, loosening the iron hand that has been too-long suppressing us.

The Rainbow Remix Family Dance Party raised over $1000, and that was only the first one. Expect news of the next one to come on August 11, 2018.

If you wish to donate to the Rainbow Book Fund, send checks to: