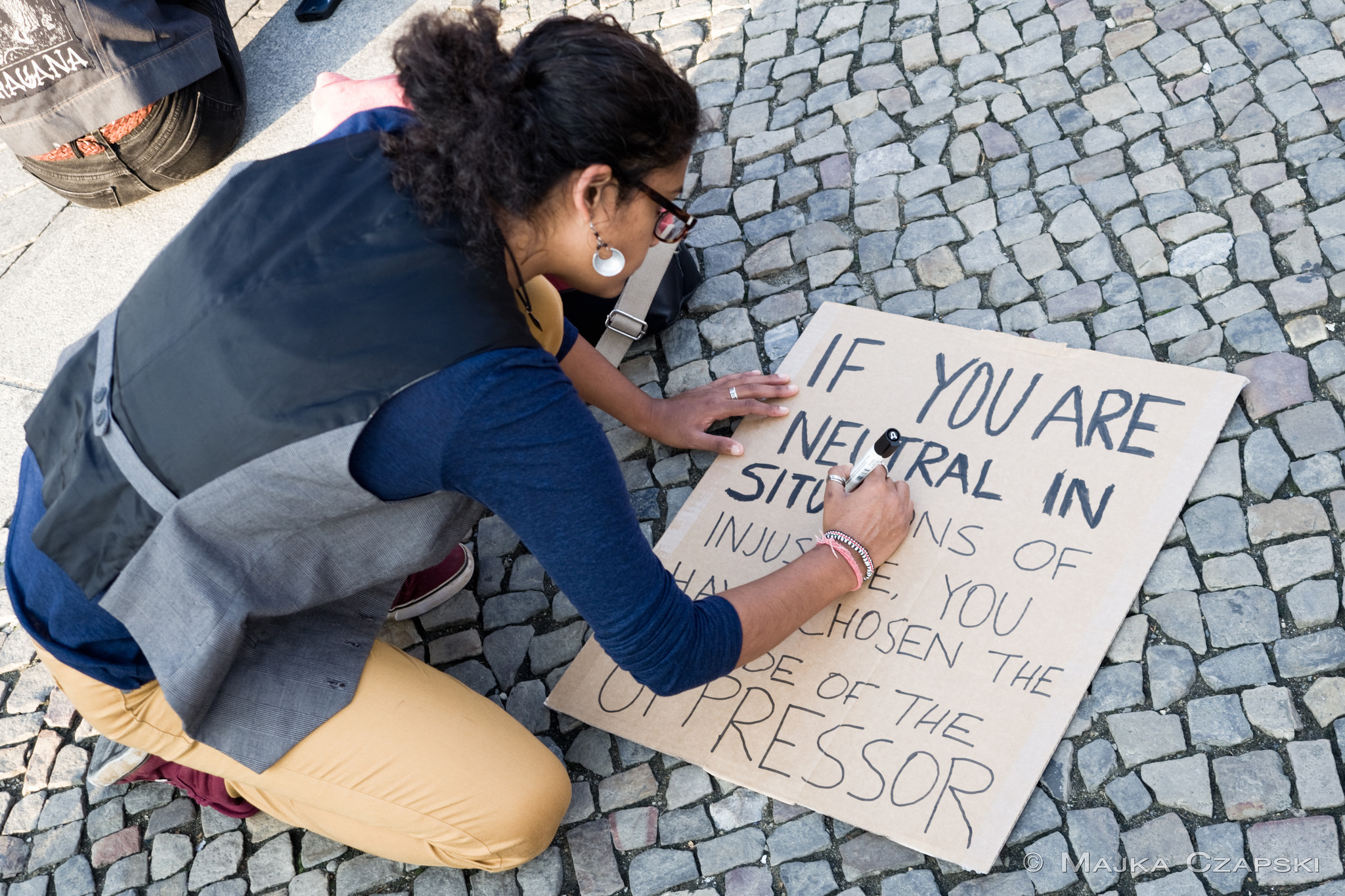 As the white supremacist group, Patriot Prayer, descended upon Seattle this past weekend I had the opportunity to march with fellow anti-racist activists, to be in solidarity with Charlottesville, and to use my voice and body to say no to white supremacy.

After Sunday’s counter-protest, I went to a yoga class because I was curious how the yoga community would address the Charlottesville’s violence and wanted a space to bridge my spiritual practice with activism.

As a white woman yoga therapist I typically feel comfortable in yoga studios, yet that day I experienced cognitive dissonance walking from a rally of white supremacists and counter-protesting folks into a room of white people smiling and stretching, seemingly oblivious to what was happening so close to the studio.

As the teacher lay near the front of the room asking for any requests for class, I internally screamed, “talk about what is happening in our city at this very moment.” Instead, a white man said, “core.” I wish I would have made my voice heard and said what my insides were screaming, but instead I sat in silence.

The teacher opened up the class with the topic of forgiveness, mentioning “the news.” I wondered what she meant by the term. Did she mean the violence happening in Charlottesville? The rally and counter protest in Seattle? The potential for nuclear war? The landslide in Kotrupi? She then shared that forgiveness is part of the path towards liberation.

“The news” assaulting my mind was Heather Heyer being murdered as she fought white supremacy not 24 hours earlier in Charlottesville, Deandre Harris having staples in his head after being beaten by white supremacists, Seattle mayor Ed Murray issuing and sustaining a permit for a group of white supremacists to rally at Westlake Park, and the Seattle Police protecting that group – pepper spraying and deploying non lethal “blast balls” at the counter-protesters. Now is not the time for forgiveness.

For me, now is the time to feel all the rage, anger, fear and sadness and move towards action in fighting for justice. This is one of my spiritual practices: radical honesty and fierce compassion. When I forgive too soon I discount the hurt, violence and harm that happened, and continuously occurs daily.

Forgiveness becomes a part of my practice after I feel the magnitude of my feelings, and typically when the incident is in the past. I work on forgiveness when something happened and I am still suffering. As a mental health therapist, I would never ask someone who is actively being abused to work on forgiving their abuser. I would focus on finding safety, advocating for them to find their power and resilience that supports them moving from the abuse and to finding a supportive community. This country is still in the midst of the trauma and abuse of racism and oppression, and forgiveness feels premature.

Forgiveness can keep white people like myself believing in the liberal white feminist notion of “love trumps hate.” I do not believe love, without action, trumps hate. I do believe that solidarity, breaking with white supremacy, using our voices and our bodies to disrupt white supremacy and taking action can trump hate. Love, in itself, cannot.

I agree with the teacher that forgiveness can be a part of liberation, and I have found forgiveness to be healing and powerful in my own life. Anger, rage, grief, hopelessness and fear are also on the path of liberation, and all of these have been important aspects for me to reclaim as I felt these aspects of myself denied and even shunned in yoga and meditation communities.

Feeling what is actually happening within me can be a path to liberation, including the reality of white supremacy in our country and in myself that I cannot forgive right now. Forgiveness given too soon can rob me from taking the time to feel the magnitude of the impact of what happened in Charlottesville. It can let me off the hook from feeling the incredible injustices happening in this country.

At the end of the class the teacher had us sing, “I’m sorry. Please forgive me. Thank you. I love you.”

I’m sorry. I’m sorry for the ways I have continued to cause harm and perpetuate oppression consciously and unconsciously. It is easy for me to look at the white supremacists in hoods and “other” them while believing I am nothing like “those people.”

White supremacy is ingrained and conditioned in me too. It happened in this class when I chose to stay silent instead of make a request to talk about the violence happening in our city and country. It happens when I feel entitled to decaf coffee at a POC run coffee shop that does not serve decaf. It happens when I expect to feel comfortable in most businesses I go to because they cater to white people. I’m also sorry to fellow white folks who I have alienated and othered. I am sometimes not graceful when engaging with other white people around the trauma of white supremacy. I am sorry, and will work for the rest of my life to keep doing better.

Please forgive me. Forgive me because I will continue to make mistakes even as I try to do better. When I make a mistake I also intend to not forgive myself too soon, and I will feel the guilt and the remorse that is a part of the process before forgiveness. I also intend to not get stuck in guilt and remorse so I am paralyzed to move forward towards action and, inevitably, making more mistakes.

I love you. The reason I fight for justice is because of love. The reason I challenge other white people is because of love. I desperately want us white folks to connect to the ways white supremacy is conditioned inside so we can uproot, dismantle and make different choices and actions in the world. Choices that come from love, and actions that are rooted in love. When I protest it is a form of prayer.

When the teacher had us sing these words to other people I could not do that towards the system of white supremacy right now. Not yet. Maybe not ever. Forced forgiveness might make me appear more spiritual, but when I am honest with myself I am not ready to forgive. Honesty feels like a part of the path of liberation for me today. What is radically true for you? What do you feel? Can you hold that with fierce compassion? Can you take care of those feelings so you can move to a place of grounded action? What will be your action to fight white supremacy?

4 thoughts on “Forgiveness and White Supremacy: The Habit of Spiritual Bypassing”