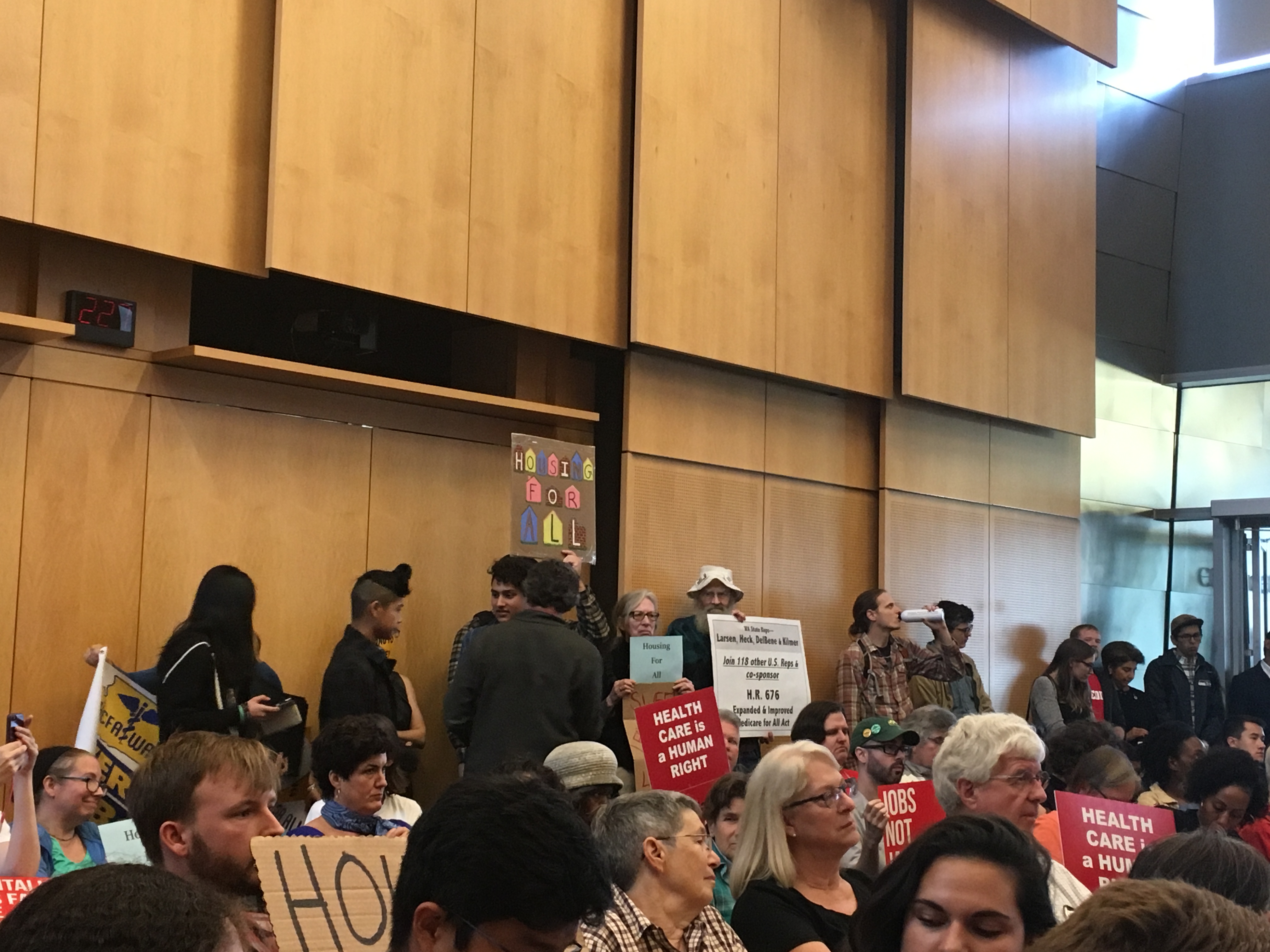 Monday’s Seattle City Council meeting met with fanfare that’s become commonplace in a season of major announcements in the political scene: socialist activists crowding the council chamber, sweeping platitudes from councilmembers and a press corps snapping pictures and hammering away at tweets.

By the meeting’s adjournment, the council had voted Tim Burgess to take over as acting mayor and passed Councilmember Kshama Sawant’s resolution urging Washington’s congressional representatives to support a single-payer health care system for all.

Nearly forgotten in the drama over now Mayor Burgess’ appointment were the in-progress homeless sweeps taking place around the city. Several members of the community came forward in a protest organized by the Seattle Transit Riders’ Union and other organizations in the Housing for All Coalition, to denounce the sweeps and suggest the city should provide a more permanent solution to homelessness than moving people into improvised shelters.

Eliana Scott-Thoennes a member of the Neighborhood Action Coalition who was arrested for blocking police conducting a sweep from accessing a homeless encampment last week attended. In the public comments, she asked the council, “Do you want us to be a city that arrests people like me for standing with their neighbors?”

She went on to say, “I know very well that taking action can be hard and uncomfortable, and even risky, but I’m here to tell you that our coalition is prepared to put our values and our ideals into action despite the costs or the discomforts or the risks,” to the applause of the audience.

In the debate over the single-payer healthcare resolution, Councilmember Sawant’s opening remarks mainly focused on national resistance to President Trump, but she did conclude her statement by tying homelessness, the housing crisis and the lack of healthcare together as part of a “inhumane and dysfunctional system” saying, “I agree with all the activists, we need a stop to the sweeps of homeless people. We need affordable housing to house the homeless.”

A friend of mine who had never attended a city council meeting sat next to me and was overcome with boredom at the council voting on various legislative measures. It was a reminder that despite the gravity of the daily proceedings, they were still just that, daily proceedings of a local government.

Others may debate Councilmember Sawant’s methods, but the ability of her message to draw members of the public to what otherwise is a dry government proceeding seems unparalleled on the council.

Councilmember Sawant also took the opportunity of Burgess’ mayoral appointment vote to reiterate his past support of homeless sweeps in the city. Referring to the public comments aimed at the “viciousness and ineffectiveness of homeless sweeps in Seattle,” she pointed out the mayor’s office is responsible for arranging sweeps with 601 conducted last year alone under then Mayor Ed Murray.

“People keep coming back because they have nowhere to go and they’re human beings,” she said. “I do not support a mayor who is pro-sweeps as Councilmember Burgess has consistently been.”

The rest of the council failed to address the ongoing homeless sweeps in the meeting.