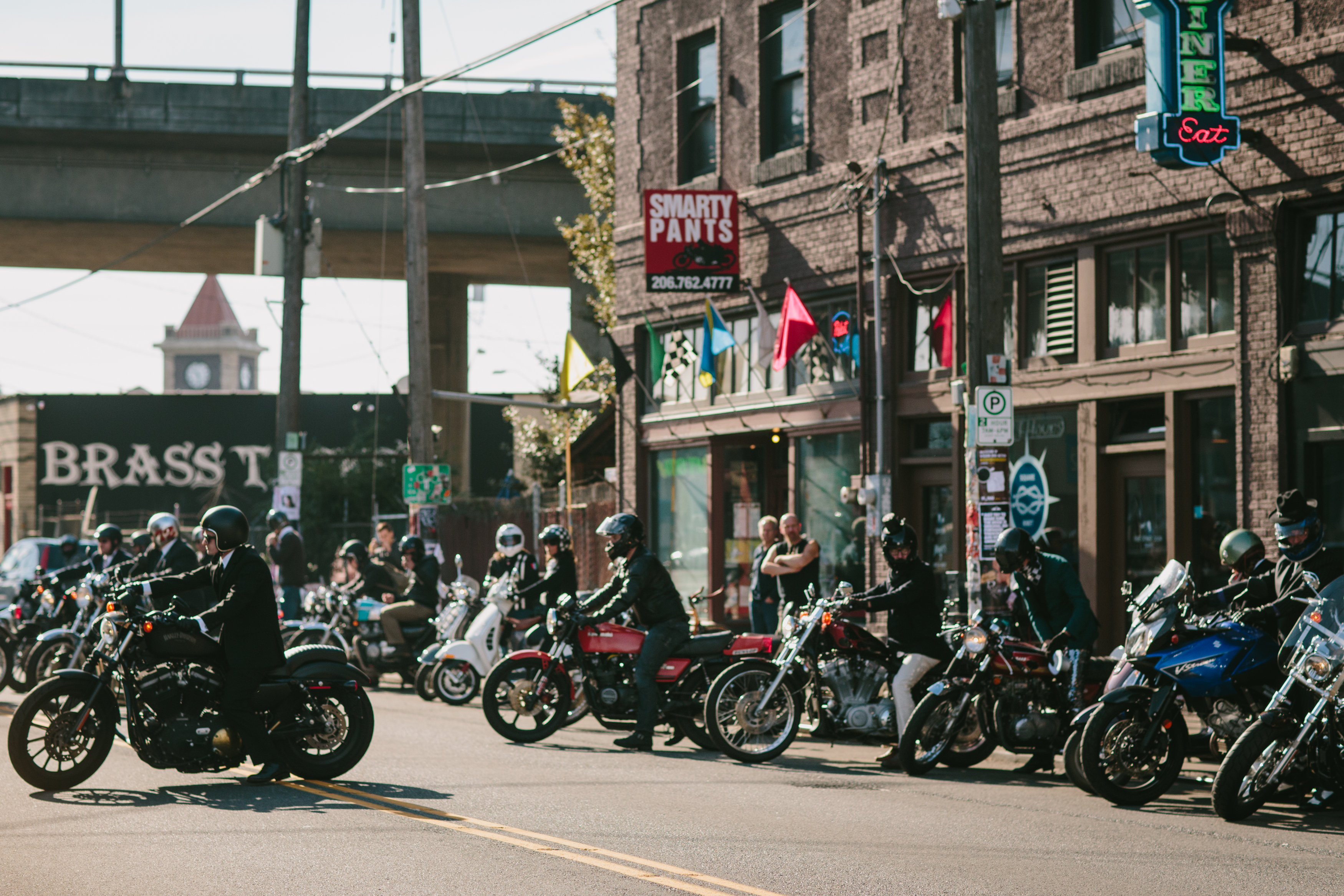 Sunday morning, hundreds of motorcyclists, bedecked in their dapper finest, will ride across the city on classic motorcycles and scooters. They’ll be part of a world-wide charity effort called the Distinguished Gentleman’s Ride which raises money for prostate cancer research and men’s suicide-prevention services.

Erik Carlson, the founder of the Seattle chapter of the ride and the event host, met me at the Wick, a café racer-themed coffee shop just south of the Fremont Cut. Having just finished the planning ride of the route, Carlson arrived wearing a leather cut with the patch of the Pleasure Barons Motorcycle Club. The front of his vest was adorned with pins from other motorcycle clubs and previous rides. Topping it all off were his friendly mutton chops.

“We’re trying to make up a little bit for the tarnished image of the motorcyclist,” he explained. “Because we’re quick and maneuverable it can feel like we’re being abrupt if you’re driving a car and have to deal with bikers. This is an opportunity for us to say we can be polite, we can be genteel and we’re going to follow the rules.”

The first ride took place in 2012 in Sydney, Australia after the founder, Mark Hawwa, was inspired by a picture from the AMC series Mad Men in which the character Don Draper is depicted in a suit astride a classic motorcycle.

In the next year, Hawwa lost a friend to prostate cancer and he introduced the idea of raising money towards research for a cure for the next ride. In 2016, the ride organizers expanded the charity role to raise money for the Movember Foundation, a suicide-prevention non-profit.

Carlson heard about the original ride in 2012 and was excited at the prospect, but no one from the Seattle motorcycle scene stepped up to organize. The next year, he resolved to head the event with help from various Seattle motorcycle clubs. The premier drew about 60 riders. Last year 250 showed up and Carlson says he expects about 300 riders this year.

Carlson expressed concern about the growth of the ride and the future need for permitting with the city, especially because the event’s organizers are unpaid volunteers.

Still, the money raised by the world-wide event is not inconsequential. To date, the charity has raised over eight million dollars for prostate cancer research and men’s mental health services. This year, organizers expect about 70,000 registered riders to raise funds and participate in 600 cities across the world.

Carlson says collaboration between motorcycle enthusiasts characterized the effort in Seattle right from the beginning. Clubs involved include the Pleasure Barons, the Cretins, and the Knucklebusters. Other organizations taking part are the Fusebox Moto Riders, the Vintage Motorcycle Enthusiasts and the Rainier Ravens, a group which hails itself as a Pacific Northwest Women’s Moto Collective.

Supporters are encouraged to back riders with donations for the event or even take part themselves. For those wishing to view the ride, the best areas this year are Lincoln Park and SW Admiral Way on Sunday morning. The ride will finish at The Wick and Moto Café on Queen Anne Ave. N.

This year’s ride will make its way over the Alaska Way Viaduct before its demolition in what Carlson describes as a “swan song” for the aging roadway. “It’s ridiculous, it’s absolutely ridiculous,” he said. “We’re in suits and tweed. It’s dandy and dapper. It’s a pinky-in-the-air kind of a noodle through the city.”