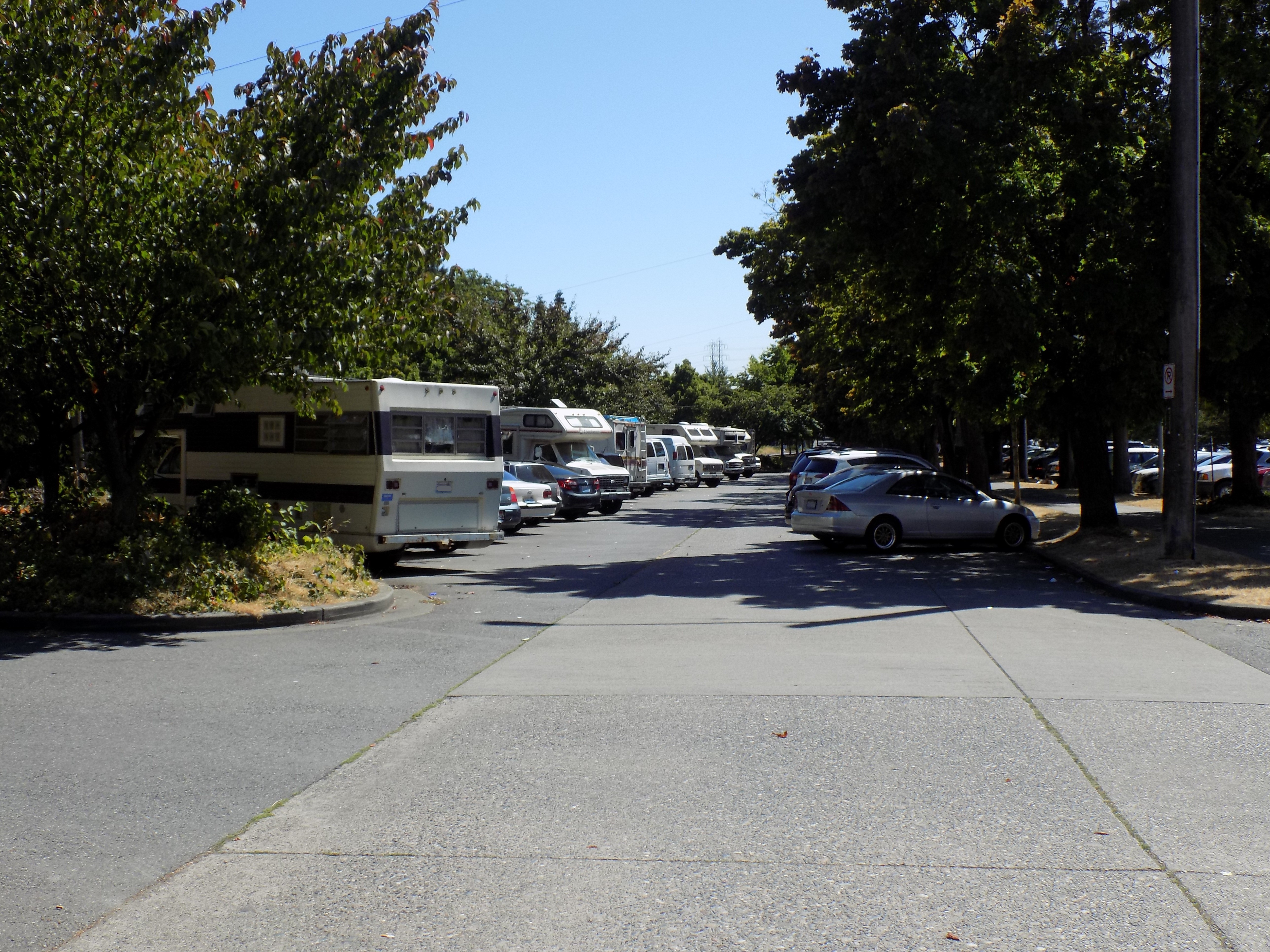 The first homeless encampment I visited was in Iraq along a tributary of the Tigris River. My platoon was conducting a census of squatters living outside company housing for a nearby oil-processing facility.

The camps make for fertile recruiting grounds for people willing to perform a variety of tasks associated with insurgency. You could make quick cash digging a hole in a road for someone else to come along and slip a homemade bomb into.

The people, like the reeds hugging to the moisture of the embankment, were sun-soaked and dusty. An old woman, her face a patchwork of wrinkles and open sores, stood watching us work outside the mud shanties.

Years later, I found myself visiting another homeless encampment. This one is in Seattle and populated by veterans. Residents of the lot have experiences of the Korean War, the Vietnam War, the Gulf War and the War in Afghanistan, a conflict spanning back 16 years.

Located near the Veterans Affairs Medical Center on Beacon Hill, the camp is made up of about 10 vehicles—mostly old RVs. Meeting me was a man who introduced himself as Cali. Having served as a combat engineer in the army, Cali, now 45, is employed as a construction worker. He lives in a single-room RV that’s been in the lot 11 years and can no longer move under its own power.

Deftly managing his vape pen in a hand with a lopped-off finger, Cali speaks with casual profanity in rolling bursts as the moment takes him. He moved to Seattle about a year ago and began living in the lot, sleeping in his car. Another occupant, who’d lived in the lot for eight years and recently moved to a larger camper, offered his previous trailer as lodging.

The proximity to the medical center certainly played a part in Cali’s choice to stay. He’s undergoing treatment for a chronic back condition. “I love the Pacific Northwest,” he said, “I love the way the VA takes care of us, I love that fact that my doctor does house calls, at least to us homeless people. How do you bitch about that?”

Yet living in an RV without power or plumbing presents unique challenges as well. “Being homeless is expensive,” he said, explaining that without a refrigerator he is forced to buy groceries every day.

Mostly, he worries about a run in with parking enforcement. He says if he’s at the trailer, the officers will usually avoid issuing him a citation. However, while he’s at work, he worries he’ll come home to find a ticket.

To get around needing a mailing address for his vehicle registration, he says several non-profits around town will receive mail for homeless people. However, he is unable to afford the fee for the new tabs that would get him out of paying for tickets. Additionally the camper portion of his trailer adds $350 to the vehicle registration cost and he can’t afford to buy tabs at $550.

He also said he struggles every day to find a place to go to the bathroom and shower. Impressively, he casually recited the open hours of every building nearby with an available toilet.

Residents of the lot have a strict policy of never using VA trashcans for fear of reprisals. Most use bottles to relieve themselves, then take them to dumpsters elsewhere. “We get caught doing any of that, that’s a fucking felony,” Cali explained. “You’re essentially dumping human waste, sewage, a biohazard in a trashcan. So we’re running a risk just to take a shit every day.”

Responding to the hostile environment, the residents of the lot have banned together in a sort of makeshift community, something that comes natural to many with the experience of wearing a uniform. In a way, the encampment becomes a patrol base and the residents become a unit.

Cali described veterans sweeping up parking stalls, likening their care to the military practice of a ‘police call’—essentially walking together in a line over a site to make sure it is free of garbage and personal items. “It’s a community,” Cali said.

At one point, when the lock on the door of his RV broke, he felt comfortable going to work as other residents would keep an eye on his trailer for him. The group will even host cookouts occasionally, typically drawing seven or eight attendees.

The VA Puget Sound Medical Care Public Affairs Office declined to comment on the lot near the hospital, citing that the land it sits on belongs to the city, not the medical facility. The King County Sherriff’s office referred me to the Seattle Police Department. SPD failed to respond to my queries by publication time.

The encampment is unique in its cleanliness and its highly visible location, but ordinary in the precarious position it occupies straddling multiple agencies’ jurisdictions. King County’s count of people living without shelter increased this year to 11,643 individuals experiencing homelessness. Of that number, 2,314 are living in vehicles (about 1 in every 5 individuals without shelter).

Rebecca Murch, a U.S. Navy Veteran and Executive Director of Seattle Stand Down, a homeless veterans advocacy non-profit, met with me to discuss homeless veterans in Seattle. Referencing people sleeping in vehicles she explained “…more than likely they’re probably parking illegally, they’re being ticketed for various things, so now, as a society we’ve kind of criminalized homelessness. Now they have legal issues and financial issues…on top of the housing issues they already have.”

Seattle City Councilmember Mike O’Brien has attempted to deal with the problem by proposing legislation to provide a path to amnesty for people living in their vehicles in the city. Scott Lindsay, formerly of Ed Murray’s office, leaked the proposal, leading to critiques of allowing vehicles parking citation exemptions.

Interim mayor Tim Burgess recently announced increased funding in the city’s budget for homeless services, but so far his office has not made a ruling about people living in vehicles. Until an official policy is adopted towards some sort of amnesty program, those living in vehicles will continue to camp on a precarious ledge.

In an interview, Councilmember O’Brien said, “We really do not have strategy around people living in vehicles.” He is calling for the use of outreach teams dedicated to the unique needs of people coping with homelessness in vehicles. Current outreach centers are not set up to accommodate vehicle owners who would prefer the relative comfort and privacy of an RV to a crowded shelter.

“We were not getting the type of attention from the administration we wanted, so we started drafting the legislation,” he said, pointing out the items addressed in the legislation could be implemented immediately through a mayor’s executive order.

O’Brien added, “We’ve always recognized the point of the legislation was more about elevating the topic and getting some commitment to actually take some actions and ultimately build a strategy.”

Citing the city’s attempt at a managed safe lot in Ballard, O’Brien called it “an extremely expensive model” and went on to say, “If we’re going to find solution that’s financially sustainable, it’s going to be incumbent upon the individuals to do a fair amount of self-management.”

From safe lot locations, residents of vehicles could have access city resources aimed at helping them attain more-permanent housing O’Brien said. In the model, city aid workers would be in encampments for a few hours a week rather than 24 hours a day, leading to lower costs for the city.

“Again, it’s not going to work for everyone,” he said, “I know there are some individuals who I’ve interacted with in vehicles who have a unique set of challenges…some of these folks may not work well in a self-managed encampment, it would be chaotic. For those folks we’re going to need special resources.”

He recognized city sweeps where police and aid workers are involved for a short but intense period before the vehicles are moved to another part of the city is very expensive and doesn’t produce long-term housing outcomes.

Talking with Cali, you get the sense the encampment is under siege. Even something as innocuous as a farmer’s market may mean someone filing a report to the authorities. The veterans share the lot with an unofficial market every Friday and Saturday. Without portable toilets in the area, people relieve themselves on the side of trailers, something the vehicle residents fear may lead to reprisals due to complaints from VA employees using the lot during the day.

Their tenuous status sometimes creates stressful situations leading to threats of violence. Farmers’ market vendors will arrive at between 1-2 a.m. Friday mornings. Hearing a loud conversation outside his window in the morning, Cali says he’s emerged with a machete in one hand and a buck knife in the other to tell them to leave on more than one occasion. Most residents of the lot keep other weapons in their vehicles as well.

The veterans’ camp seems excluded from most of the sweeps conducted in the city. Part of that might be the city’s hesitance to forcibly remove veterans from their place near the VA hospital. The veterans themselves, sandwiched between a farmer’s market, a hospital parking lot and a busy road are living on the edge.

Yet, surveying the lot, I saw gear neatly tucked under vehicles and a bird feeder hanging from one of the RVs. As Cali showed me the encampment, from the way he spoke about it I realized we were talking about his home. It was a reminder that individuals, wherever they find themselves, will try to find ways to make it comfortable and familiar.

People experiencing homelessness, whether they are in within sight of a golf course in Seattle or on the banks of the Tigris share a very human need for a safe, clean place to live. “We all got problems,” Cali said, “I wish people would understand that just because I’m a veteran and just because I’m a disabled veteran, doesn’t mean I’m broke.”