It’s just five minutes past 10:00 on a sunny Friday morning in the Southeast Seattle Senior Center’s (SESSC) recreation room, and exercise coach Mark Bryant will be damned if he allows his fitness class an easy path into the weekend. Over acid rock-tinged background music, he barks forceful commands to a dozen sitting seniors. They obey, rolling their neck in a circular motion to the right, then the left, then curling their torsos under their feet, then hovering their fingers over their toes.

Between orders, Bryant walks the circle of 60- to late 80-something students and delivers a personalized joke as collegial as his instructions are authoritative. “I see you made sure to bring an outfit that coordinated with your weights,” he tells one woman wearing a purple tracksuit that matches her five-pound dumbbells.

After a brief round of small talk, Bryant ratchets up the intensity with an exhaustive circuit of side-to-side toe tapping—what looks like skiing in place—and some arm circles. Though the class has barely lasted a half hour, it looks like it’s taken something out of the teacher.

“I’ve worked so long at this senior center that I’m now a senior myself,” laughs the 58-year-old whose chiseled frame resembles Homer’s description of Achilles in the Iliad. Bryant has taught here for 12 years, and Friday’s class is just one of eight he leads during the week in the South End. His combined pay adds up to “enough to tell a bill collector I’ll give you the rest later,” he says, but what he lacks in financial gain, he more than makes up for in gratitude from his students.

“I love his sense of humor,” says AJ Lowe, who attends both the Friday class at the center and another that Bryant teaches at her apartment complex. “I’ve given up on other exercise programs. He gives me hope that my life isn’t over.”

As serious and direct as Bryant can come across to those unfamiliar with him (attributes gained from his New York upbringing, he says), it’s his ability to inspire laughter in the middle of extreme exercise that has endeared him to his students.

“Mark knows a lot about human beings and our bodies. And he always keeps it fun,” says Jeff Panciern, speaking during a five-minute break in the class. “He once had us doing all this choreography. I said, ‘With moves like that you have to take us to the disco.’”

This mix of stand-up comic and hardline drill sergeant wasn’t always as appreciated as it is now, says Lynda Greene, Executive Director of the SESSC. “When I first started here eight years ago, I was like, ‘He’s talking to these people so rough,’” she says. Now, she couldn’t imagine anyone else in his role. In fact, neither can his students.

“If we have to have a substitute because he can’t make it, students won’t come,” Greene exclaims. “People light up when they see him. You can’t copy someone’s personality.”

Now a five-time powerlifting champion, Bryant brings more than just good humor to the group. He has a deep knowledge of human physiology, which his students credit with helping them battle physical impediments they long accepted as part of everyday life.

“I’ve gone to so many so-called trainers who weren’t able to give me valid advice,” recounts Matthew Jones. That wasn’t so with Bryant, who Jones first met 7 years ago at the gym when he was attempting a return to power lifting after a debilitating injury. “Mark was able to explain what muscles were being impacting when I’d lift and which ones weren’t. When you’re older you have to train differently. He convinced me this was the guy I wanted to train with, and he inspired me to start competing again.”

Bryant’s students often use the word “genius” when describing his vast knowledge of the human body—infomation cultivated over years of study and practice. On the wall of the center’s office space, the instructor proudly displays his latest certificate: a National Commission for Certifying Agencies accreditation in personal training, which is the equivalent of evidence of a lawyer having passed the Bar exam.

With his knowledge, charisma, and magnetic personality, it’s easy to wonder why he’s leading classes at senior centers, Good Wills, and assisted living complexes rather than high-end gyms. “I’ve worked at the [Washington Athletic Club] and other places. Those places aren’t for brothers,” he says. “I’ll just be a straight-up New Yorker with you.”

He says it’s about helping those in need, regardless of whether they can afford to pay. Most of his South End clientele cannot.

“Look, I’m gonna help someone who needs it. If they can pay great, if they can’t then they can’t. But I’m going to try and help someone regardless,” Bryant says, adding that most trainers at gym franchises are more concerned with pay than a client’s health.

His approach has paid off for him, at least once in a big way. Five years ago, an orthopedic surgeon read an article about a lingering hip problem plaguing Bryant. Admiring the personal trainer’s selflessness, the surgeon offered his services for free. After years of suffering Bryant was finally relieved of chronic pain.

His compulsion to help was forged during his New York upbringing, which Bryant describes as brutal.

He shares stories of a decade of physical abuse that he and his mother suffered at the hands of his paratrooper stepfather. “He was an alcoholic 7 days a week, and, of course, when he drank it just made him crazy,” Bryant says of the man who beat him so badly as an 11-year-old that Bryant almost died. For his mother, the abuse resulted in frequent hospital stays. She now lives in Georgia and suffers from seizures and memory problems that Bryant believes are a result of the beatings.

These interactions with his stepfather inspired Bryant to begin lifting weights and practicing martial arts, specifically Gung-Fu. Though boosting his confidence, it failed to provide him with direction. For him, it wasn’t enough to simply survive in Queens, he desired to thrive.

“I’m sitting outside one day and wondering what choices do I have? I live in a neighborhood that’s real bad and poor and our education system is so-so.  But I’m on this stoop thinking this little circle I live in can’t be the whole world,” he remembers. He asked friends about other cities, and one suggested visiting Seattle. “I knew about as much about Seattle as I did Timbuktu, but I knew it was different from New York,” he says.

In 1985, he officially traded the Big Apple for the Emerald City, and hasn’t looked back since. Today he lives in Columbia City. “The only thing different from the two cities is that New Yorkers are more direct, otherwise at this point I call myself a Seattleite,” he says.

Although the 206 has softened hum a bit, he says he does miss the rapid flux of East Coast cities. “People used to say hello to you when you walk down the street. Those are the ones you can tell have been here for awhile. New people are more standoffish,” he says about his adopted city, adding that he hopes to never leave it.

It’s the city to which he brought back his fifth power-lifting championship (in the 50-year-old age bracket) two weeks ago from the World Championships of Powerlifting held in Las Vegas. Never one to be confused for humble, he says he knew he had already won it before he got on the plane.

As we rap up our conversation, a student asks if he’ll be teaching the next class on Tuesday.

He’ll be there. Count on it. 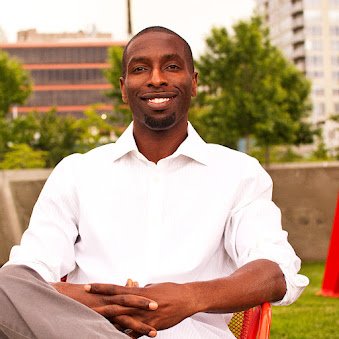 Marcus Harrison Green, is the editor-in-chief and co-founder of the South Seattle Emerald. He writes a regular column on South Seattle personalities, social movements, juvenile justice and American society. He is a former scholar-in-residence at Town Hall Seattle, a past Reporting Fellow with YES! Magazine, and a recipient of Crosscut’s Courage Award for Culture. He currently resides in the Rainier Beach neighborhood and can be followed on Twitter @mhgreen3000