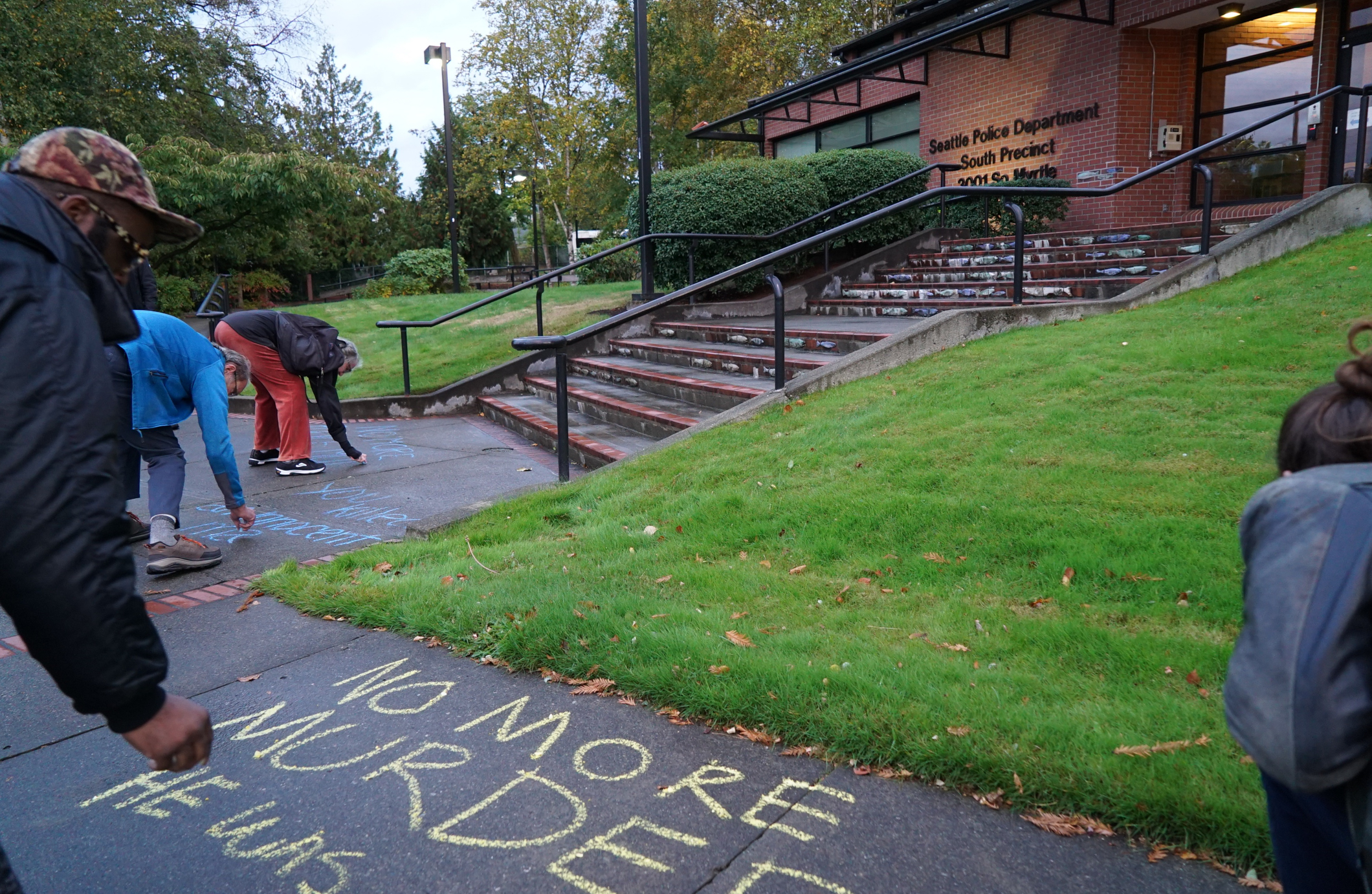 More than a dozen people gathered outside of the Seattle Police Department’s South Precinct late Wednesday evening to hold a vigil for Michael Taylor.

The planned gathering took place one year to the day Taylor was fatally shot by a Seattle Police officer during a sweep of the homeless encampment, known as “the Jungle,” on October 11, 2016.

SPD claims they came across Taylor involved in a heated altercation with another man. Alleging they were unable to de-escalate the fight, police say they saw Taylor clutching the blue handle of a kitchen knife printed with purple eggplants. Officers then fired multiple shots, resulting in Taylor’s death.

“It’s up to us to call his name, to remember him,” K.D. Senior, of Safe Seattle and an event organizer, said of those assembled at the precinct’s 3001 S Myrtle Street address.

Senior joined vigil attendees in writing notes to Michael that read “I love you.” They then performed a small ceremony that saw attendees burn the notes and throw the paper’s ashes into a container of dirt.

The collected dirt came from the area where Taylor died that fateful day in the Jungle. After the ceremony vigil activists returned the dirt and ashes to that very location in memoriam.

Demonstrators also expressed their opinions by writing chalk messages on the pavement just outside the police precinct. Some of the messages included, “Stop Killing Our Neighbors” and “No More Murder.”

Several in attendance on Wednesday also reflected on Taylor’s life and its continued impact.

Reary Washington, an advocate for the unhoused, spoke about how Michael’s life and death had made a difference in the ways Seattle police now deal with homeless encampments.

“After this, they did change a lot of their policies as far as coming into the jungle or into the encampments. They no longer come in there with guns drawn. They now have a team, that’s called a navigation team, and they’re coming in there to be friendly.” She said.

However, Washington cautioned that what happened to Taylor could transpire once more.

“Right now we have a little breathing room because of the city council and the mayor, they don’t know what to do. They know they’re losing the battle (for) homelessness, and they know we’re not going away, you know you stomp us here and we’re going to pop up there.” Washington said before adding that Michael would not be forgotten.

Larry Layton Taylor, Michael father, was present and thanked attendees for being there Wednesday night. Larry told the small group that his son had been on the way up when he was killed. “[Michael] had his ups and downs in his life of course, who of us don’t, but he was on his way up, which is a sad story to this because Michael at the time was not homeless. He had his own place and was under a Doctor’s care.”

Larry said Michael had come to the Jungle to support friends in protesting the city’s indiscriminate sweeps. Larry added that although his son was not a perfect person, he was, “a good person who would live on in people’s memories.”

Amy HyunAh Pak of Families of Color Seattle, who like Michael Taylor was adopted from South Korea, choked up when reflecting on his life.

Pak wondered whether or not US Citizens born outside of the country are even truly considered American when they fall victim to violence. “Are we not American? Do we not belong here?”  She said she felt a special kinship to Michael because of their similar backgrounds.

Anitra Freeman, of Women in Black (WIB) also spoke at the vigil. In 2000, WIB began holding vigils for unhoused people who died as a result of sleeping outside or violent acts.

“We chose to focus on the deaths of homeless people outside or by violence because those were the people who were most neglected, most ignored, and most easily demonized. Their lives were demeaned, their deaths were demeaned,” Freeman said.

She went on to describe how people’s perceptions of the unhoused had changed in the seventeen years since WIB‘s founding. However, according to her, there’s still one group routinely demonized and vilified in the public eye

“When someone is shot by the police they are automatically a bad guy. That must have been a bad guy that the police were protecting us all from,’ Freeman said.

As darkness fell on the small gathering, people dispersed vowing to never forget Michael Taylor while they continue fighting for justice–for Taylor, for the homeless, and for other victims of police violence.

Susan Fried is a Seattle based freelance journalist whose work has appeared in The Seattle Globalist and Skanner newspapers.

One thought on “Remembering Michael Taylor: Vigil Held Outside of South Precinct for Man Killed by SPD”