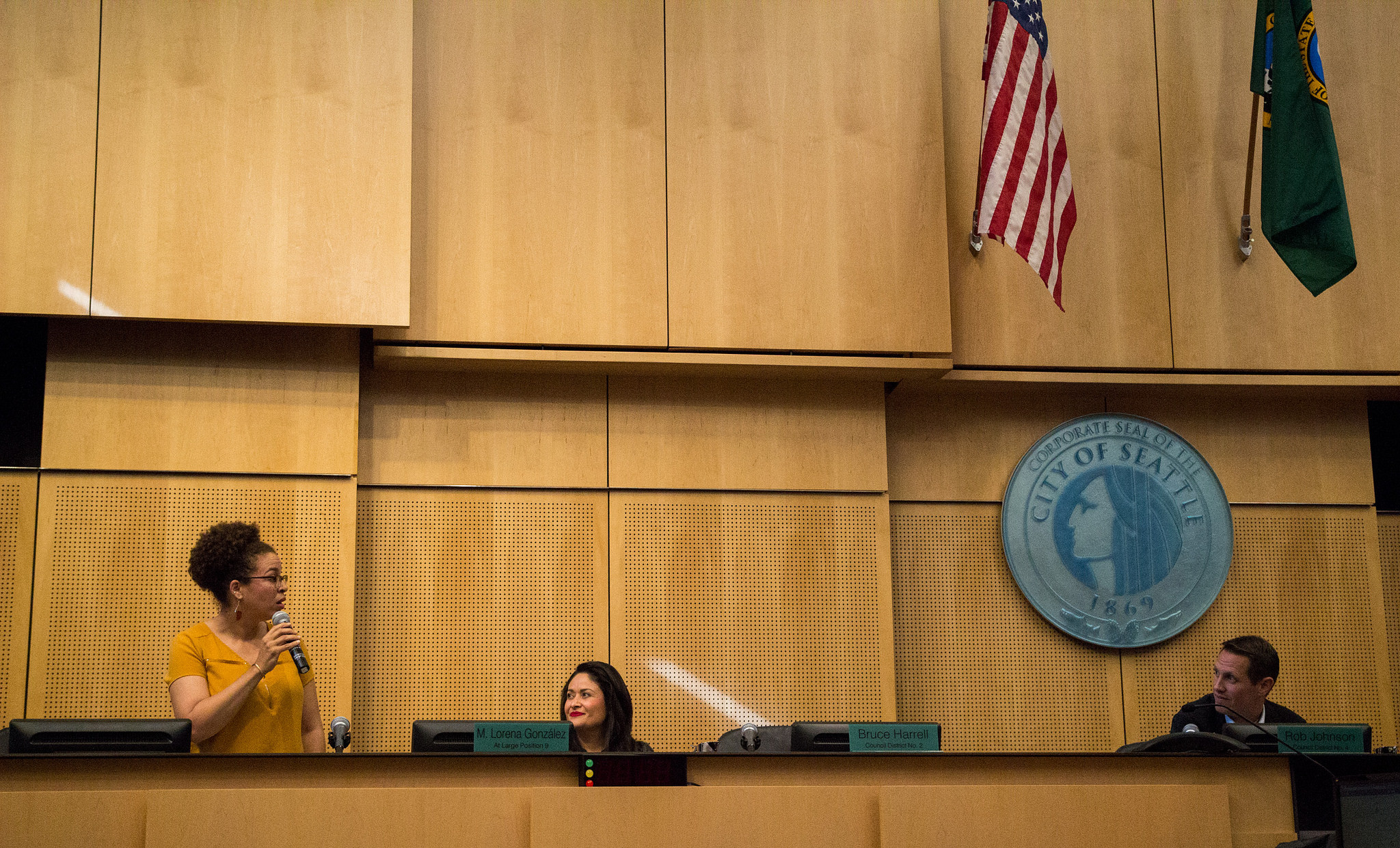 A plan to tax large businesses to pay for homeless housing and services faced intense scrutiny from several skeptical city councilmembers Monday at the first budget briefing since council members Mike O’Brien and Kirsten Harris-Talley first floated the HOMES (Housing, Outreach and Mass-Entry Shelter) Act last week. (The proposal would resurrect the so-called “head tax,” a tax for each hour an employee works, that was repealed in 2009).

Councilmember Rob Johnson called the proposal a “false choice” between a head tax and doing nothing, and council president Bruce Harrell took umbrage with councilmember Kshama Sawant’s suggestion that councilmembers who oppose the head tax are “beholden to the Chamber of Commerce.”

After the meeting, Johnson told me that his goal is “to stay focused on the outcomes” and figure out how much money service providers need first, rather than to “reverse engineer” a set of solutions based on a specific revenue source like the head tax.

So far, the proposal comes with a big number—$24 million a year—but few details. Here’s what we do know: The HOMES Act would impose a 4.8-cent tax on every hour worked by employees for companies with gross receipts of $5 million or more. The math works out to about $100 per employee, per year, and the councilmembers estimate it will raise about $24 million annually, which would include $5 million for shelters, new authorized encampments, and safe lots for people living in cars and RVs; $18 million for new housing construction and long-term housing vouchers for people with very little to no income; and $1 million to expand the Law Enforcement Assisted Diversion program, a pre-arrest diversion program for low-level drug offenders, into the North Precinct.

The number of new units the package could build depends on whether the city can rely on state subsidies through the housing trust fund, which cut the cost of construction dramatically, but O’Brien estimates the measure could permanently house 1,000 people over the next ten years.

The Seattle Chamber of Commerce and the Downtown Seattle Association condemned the proposal, calling it a “tax on jobs” that sends a hostile message to businesses hoping to expand or move here. (Amazon came up a lot in the initial press coverage of the proposal, but the tax would actually affect about 2,200 businesses, not just so-called big corporations) O’Brien calls that a false narrative; he says the tax represents a tiny fraction of the cost of doing business—”0.3 percent of your labor cost if you pay your workers $15 an hour”—and that if business groups had a better idea, they would have proposed it by now.

DSA president Jon Scholes insists the downtown business group doesn’t just reflexively “hate” all business taxes; what they hate, he says, is being left out of the loop. Case in point: Scholes says O’Brien contacted him on Thursday to let the DSA know that he was “exploring” the idea of resurrecting the head tax; less than 24 hours later, O’Brien was calling a press conference to announce his plan. The move blindsided the business community, Scholes says.

“This was not developed with the input of [O’Brien’s] colleagues on the council or other folks who care deeply about this issue,” Scholes says. “We’re not saying that there shouldn’t be new resources, but we think the resources that are going to go to this issue should be thoughtful and discussed out in the open, not decided behind closed doors and foisted upon businesses and the community.”

Seattle’s business community is relatively progressive by business-community standards—the DSA, for example, was a critical partner in making LEAD a reality, back when there was widespread skepticism about any program that would allow drug offenders to go free. Could the council risk losing business support for progressive ideas like LEAD if it alienates them by imposing taxes they hate?

Councilmember Harris-Talley says she doubts it. “I am hard-pressed to think that the businesses that are in our community are going to set aside their values to have a pissing match with elected officials who want to find resources for solutions” to homelessness, Harris-Talley says. “They know it impacts their bottom line” to allow homelessness to get worse, she adds.

The tax, if it passes, will be imposed on businesses’ gross receipts, not their net profits, which business groups argue could penalize companies that have thin profit margins and create a perverse incentive for businesses to pay their workers less or avoiding growing past the $5 million threshold. (To get a sense of what businesses would be impacted, they include groups of restaurants, like those owned by Ethan Stowell and Tom Douglas, but not individual Subway franchises or your local dry cleaner.) “Five million in gross revenues—there’s going to be a lot of people wrapped into that,” Scholes says. “Let’s say you’re a business making $4.5 million. If you grow the business [above $5 million], you get to pay tax to the city because you created jobs.”

However, he isn’t willing to shuffle around existing funding for homeless services and hope a new spending scheme will make the numbers pencil out. “Historically, four percent of people in shelters have exited to permanent housing, and to get that number to 40 percent [without additional revenue] is ludicrous. The challenge isn’t that we have a bunch of affordable housing that we’re not using—it’s that there’s nowhere to put them.”

Erica C. Barnett is a longtime Seattle journalist who covers city politics and policy as a freelance journalist for various print and online publications and at her blog, The C Is for Crank. Previously, she was a cofounder of PubliCola, the local politics blog, a staff writer and news editor at the Stranger, a reporter for Seattle Weekly, and news editor at the Austin Chronicle in Austin, Texas.