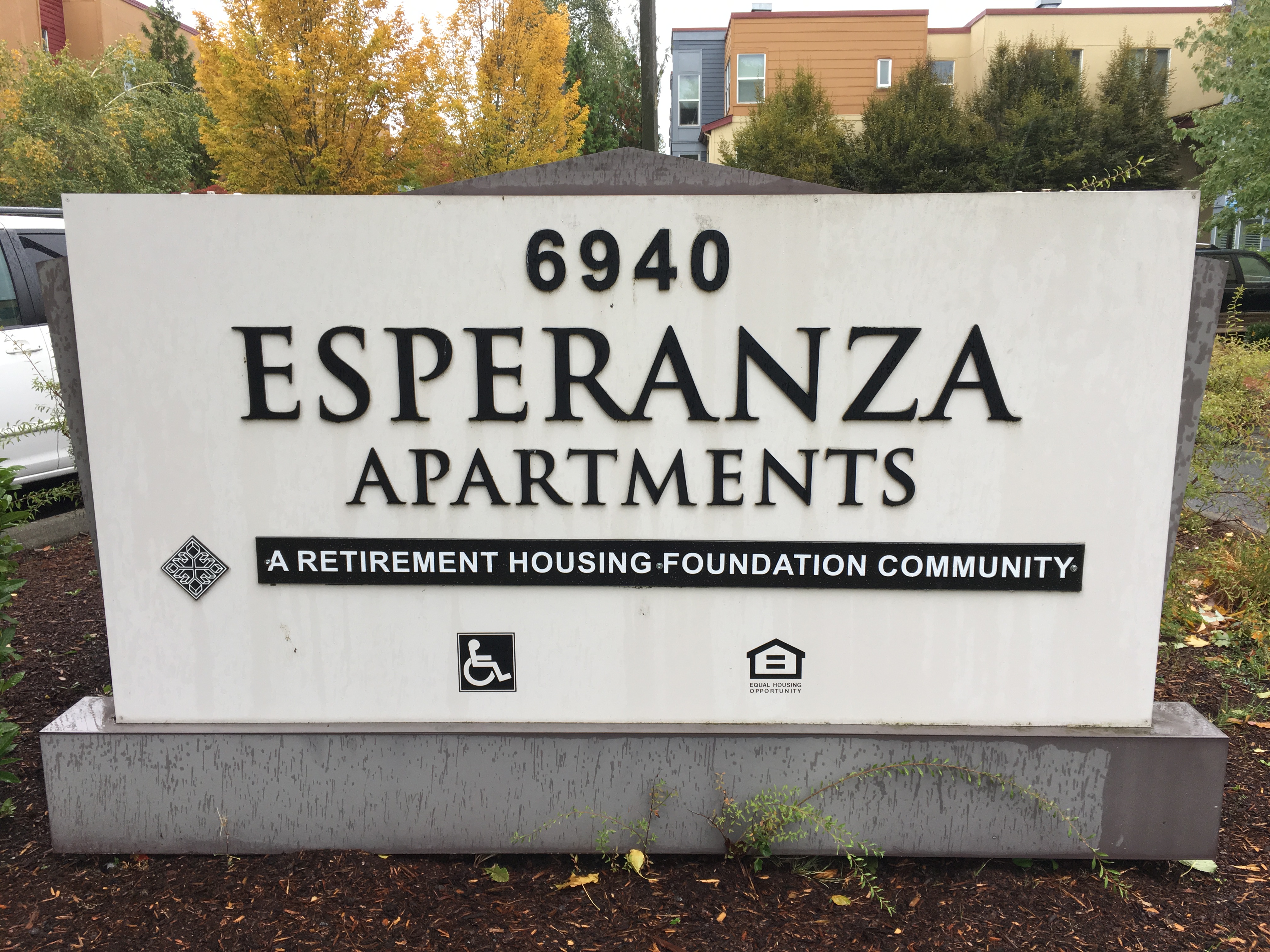 In the community room of the Esperanza House a unique meeting takes place on Wednesdays. Students from Orca K-8 meet with the residents of the low-cost senior home.

“I hate the way they drive. They are a menace on the road,” a student read from a poster-board. Laughs erupted from around the pushed-together tables and the group raised their hands to vote whether the statement applied to one, the other or both groups. The final tally: youth with seven votes, elders with four and both with six.

Other statements came up for debate as well. Declarations such as “They are so opinionated. They think they know everything,” and “They are never satisfied, always complaining about something,” split the vote between the three options.

Following the exercise, Laura Silver, the event organizer asked, “Have any of you experienced age-related stereotypes that may be on here because you’re young or because you’re older?”

One mobility-impaired elder explained his experience on the light rail attempting to navigate a crowded car. Several students and other elders weighed in with their own perspectives and the conversation shifted to what it means to be in the public eye, but to remain unseen by those around you.

According to Silver, the program grew out of collaboration between parents and their children volunteering at the Rainier Valley Food Bank to deliver food to senior centers starting about five years ago. Over the last four years, Orca has formalized the arrangement, allowing second graders the chance to assist with food deliveries to Esperanza House in New Holly, an affordable apartment community for adults age 55 and over.

Drawing on her background in social work and her interest in history, Silver approached school teacher Donte Felder at Orca K-8 with the idea for a more in-depth sessions involving what she calls “mutual mentorship.” The aim is to create a safe space where participants are free to focus on listening, public speaking and sharing.

Felder invited his father, retired principal Dr. Donald Felder to visit the gathering and he related his surprise at the community by saying, “I went the first day and it just felt like something special because of the way the elders, I have to say me too, gravitated towards the young folks and how the young folks did the same thing. There was like this immediate bond.”

The visitation portion of the program, now in its second year, hosts nine students. Those interested fill out an application explaining why they want to be involved. To keep program costs down, Silver and Dr. Felder volunteer to drive youth from the school in their personal vehicles.

Feedback from the students went into identifying topics for the meetings. Silver and Dr. Felder also encourage students to engage with their families about issues raised in the dialogues between themselves and elders. The young attendees keep a journal of their experiences in the program.

Dr. Felder explained the value of the program in that elders don’t feel alone and young people learn the value of giving at an early age. Silver said she’s received thanks from residents of Esperanza House for giving them a reason to get out of their apartments and meet other members of their community as well.

The staff at Esperanza House has happily supported the program because they lack a budget for community activities. Sharron, an elder participating in the program said, “It’s amazing to see how [the students] open up to us…some of them were really shy at first, the first group some of them didn’t want to make eye contact.”

Together with two other elders from Esperanza, Sharron traveled to visit Orca’s fourth grade class as part of a living history presentation about migration to Washington State, something the students they spoke to were learning about as part of their school curriculum. Sharron said after the talk the students lined up to ask for her autograph. One student even performed a song he wrote in honor of the speakers while another presented a drawing to them.

Like many public programs in Seattle, Bridging Wisdom struggles with a funding battle. Silver explained the difficulty in illustrating the gains of the program by saying, “We can see it, this is a loving, festival, magical relationship that’s blossoming, but how do you measure compassion? How do you measure empathy?”

Dr. Felder described another obstacle the program faces in allowing students time away. He explained the program “means pulling children out of class. When you have standards that say there are children who are already behind, it’s difficult for teachers in some cases to be able to see the relationship between this social piece and the academic.”

He added, “You always have these drawbacks and pushbacks when you do something that’s different and doesn’t appear to fit within the scheme of teaching students to read, write and do math and study science. It just doesn’t feel right. So what we have to do is make it feel right.”

Despite the obstacles, Silver said she’s hoping to expand and pointed out there’s many low-income senior housing communities in Southeast Seattle and a lot of school-age children. Silver and Dr. Felder are in the midst of developing a three-year plan for the future of the program and exploring paths to a non-profit status with advice from Rainier Valley Food Bank.

“What I admire most about this whole process is that children are willing to become vulnerable,” said Dr. Felder, “school takes that vulnerability away.” He also explained the meetings are a practice in empathy, “Many elders look different than them, if not by race, by physical being.”

While the future of Bridging Wisdom is unclear, it’s apparent in its current embodiment that the program encourages dialogue between two groups of people who are not normally heard in the community.

“Having this intergenerational group has given me a different spin on young people,” Sharron said. “I just painted most of them with the same brush, but there have been three groups that have come here and they’ve all been polite. They’ve all been really kind to elders.” She took a moment to reflect before adding “I get a lot out of it, it keeps us younger.”

Will Sweger is a contributor at the South Seattle Emerald and a Beacon Hill resident. His work has appeared in Seattle Weekly, Curbed Seattle and Borgen Magazine. Find him on Twitter @willsweger