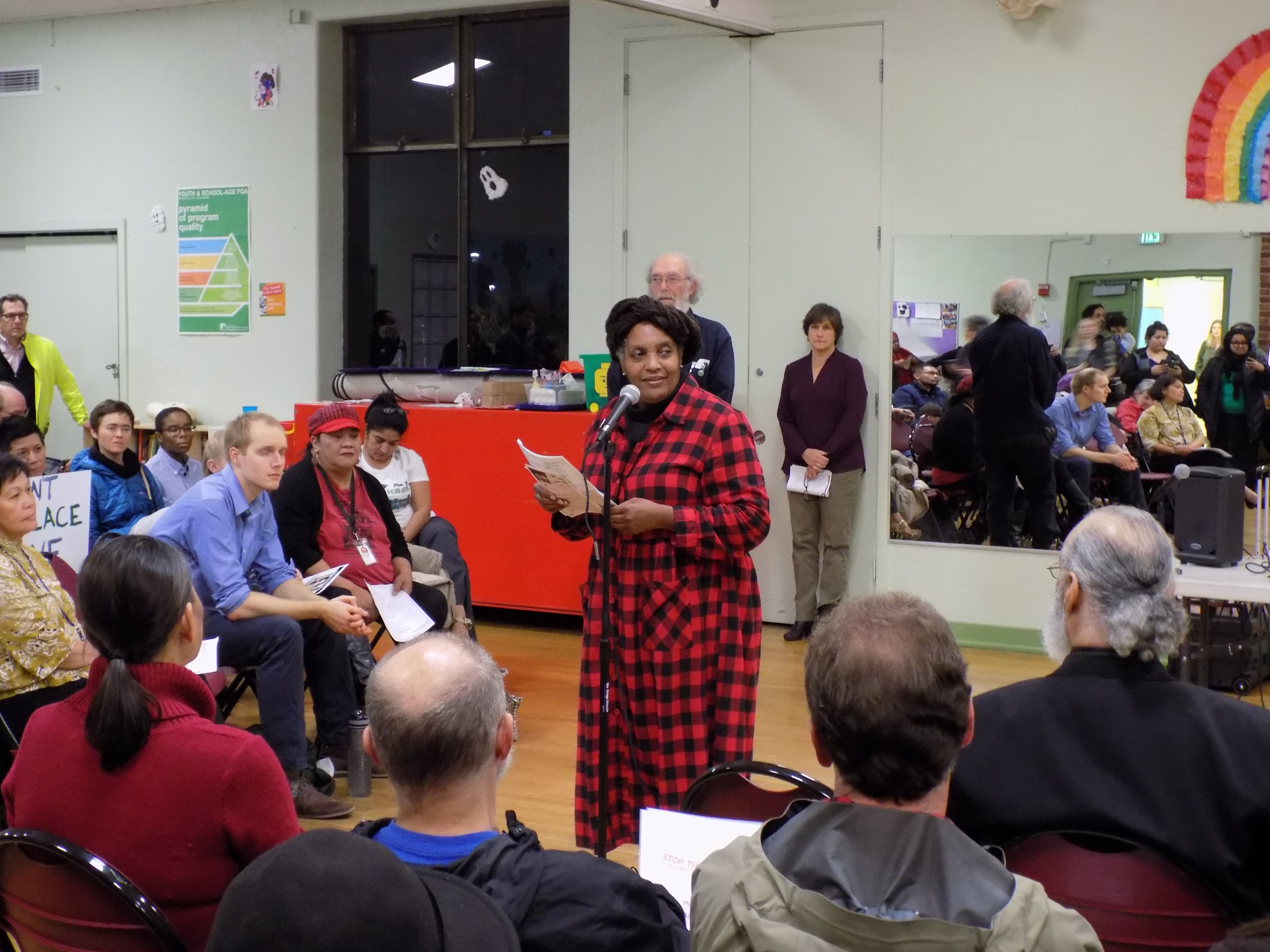 The assembly of about 150 held homemade signs proclaiming “#Don’tDisplaceDove” and “Keep Beacon Hill Affordable” and cheered as John approached the microphone. John, a resident of Beacon Hill for more than 20 years, serves on the board of the Beacon Hill Council and volunteers at a local radio station and her church. She drew attention to her plight and that of her neighbors when she spoke out earlier this month against displacement.

“I want to thank each and every one of you for being here tonight,” she said, addressing the gathered crowd. “It is a beautiful showing of the community’s strength and desire to keep affordable housing on Beacon Hill and to stop displacement and gentrification here.”

She described the threat of eviction hanging over her since the summer of 2016. John explained she hasn’t moved because she’s been unable to find affordable housing in her neighborhood or the rest of Seattle where she would feel safe. If she is evicted from her current home, it will be the fifth time she’s been forced to move within the city.

John lives in a two-story apartment building on North Beacon Hill built in 1953 and in need of major renovations. Her home is slated to be demolished and replaced with a new four-story 42-unit apartment building with units ranging in size from 244 to 435 square feet.

The rising rent crisis John faces mirrors conditions residents encounter around the city. In her position with the Beacon Hill Council, John said she’s heard from restaurant owners who are struggling to keep employees because of rising housing costs.

“Beacon Hill is beautifully ethnically diverse. Many of us on the Hill now would have been barred from living in other neighborhoods by intentional covenants and redlining, prohibiting people other than whites from moving in even if we could afford it[…]Those with higher incomes can live anywhere they want. We low income people want as many options as those who are more prosperous. People like me want to stay in our beloved community.”

Pressured by an outcry over the displacement of John and her neighbors, the Seattle Department of Construction and Inspections (SDCI) organized the public meeting as a place for residents to voice their concerns over the proposed project. Two city employees called for speakers and recorded public comments from community members. SDCI is currently reviewing the proposal for the project, when it issues a decision a two-week appeals period will follow.

Got Green, a South Seattle based advocacy organization for communities of color and low income residents, encouraged people to attend the event and voice opposition to the plan forcing John out of her home. Many of the speakers’ comments over the proposed construction mirrored concerns about micro housing and new development all over the city.

James Williams, the Organizing Director of Got Green also spoke at the event. Citing Seattle’s forecasted growth, he said, “We’ve heard about the upzones, we know what that means. We know there’s a lot of people planning to make a lot of money from the development of Seattle. We need to understand there’s enough money to be made, that Seattle can move forward without displacing the people who have lived here for a long time. We don’t have to throw people away…developers have a responsibility to help take care of the people who have been here for a long time. They have the responsibility to help foster a just transition.”

Residents lodged concerns that the additional neighbors would put a burden on transportation infrastructure near the Beacon Hill International Elementary School. The proposed building will have bike storage for 26 bicycles and will not feature a parking garage. The traffic study submitted with the architectural plans anticipates 51 residents in the future building, with 12 residents expected to bus to work, 4 expected to walk, 3 anticipated to work from home and 4 expected to bike. The other 28 residents in the building the report doesn’t plan for would ostensibly end up driving or walking a little over half a mile to the light rail station.

Neighbors also expressed worry over the living conditions in micro-units. The developer plans to provide amenities like a 900 square foot green space on the roof, but there is little consensus on whether micro housing encourages heightened engagement in the community, or if it encourages transient, single residents who are isolated from each other in tiny rooms.

More than one resident suggested a moratorium on construction of new buildings until a method could be devised to avoid displacing long-term residents from their homes. Early in her campaign, former mayoral candidate Nikkita Oliver made a similar suggestion that any new development should be considered in the light of displacement before she was challenged by pro-development activists. Williams went even further in his remarks at the public meeting. He asserted, “We need policies in this city that allow people, if they are displaced, to move back to the old neighborhood.”

Erica West, an organizer with the Church Council of Greater Seattle, spoke at the event and summed up the situation the city is facing “We talk about Seattleites and what Seattle can be and what a wonderful and progressive place it is, but progressivism is only lip service if you don’t back it up with policy and other things that support people who have been here for decades.”