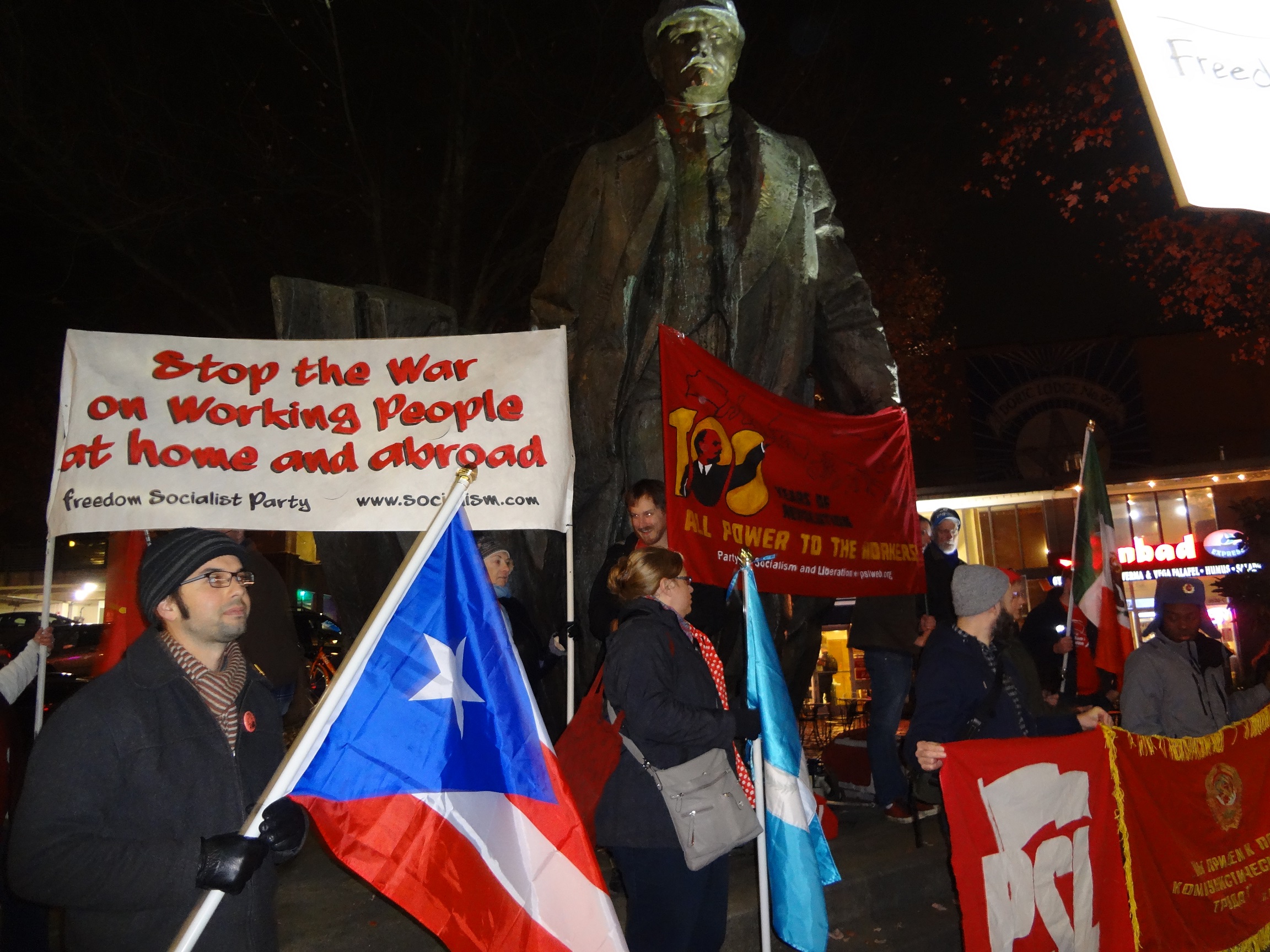 by The Committee for International Revolutionary Regroupment

One hundred years ago, the Russian people stepped onto the stage of history, taking destiny into their own hands. The revolution they made changed the course of the 20th century and became an inspiration and touchstone for every rebellion since.

The Committee for Revolutionary International Regroupment (CRIR) honors the legacy and the responsibility we owe to those who made the Russian Revolution. We are committed to fully absorbing and to sharing throughout the socialist movement our understanding of their invaluable experience on the road to their great and hard-won achievements. We are first and foremost internationalists. We reject the notion that socialism can ever be a national project. Rather it must be based on a global economic plan, designed to meet the needs of all human beings. This can only occur through forging the unity and solidarity of working women and men around the world. In these simple but profound ideas, we follow in the footsteps of those who made the Russian Revolution.

While today’s world looks very different from the Russia of 1917, there are critically important lessons to be learned from both the first victorious wielding of state power by the working class, and from its ultimate defeat nearly three-quarters of a century later—understandings too valuable to consign to irrelevance in the new millennium.

And while society today is defined by the ‘new’—the internet, near-instantaneous communication, computerized and automated everything—there is much in the human situation that echoes the condition of the world when the working class first rose to its feet.

Now, as then, capitalism, with its inexorable drive for economic and military domination, continues to embroil the world in war and genocide, creating enormous suffering and driving millions from their homes. Recurrent crises and recession wreak havoc on working people globally, with the greatest burden borne by women, particularly those belonging to ethnic and racial minorities as well as oppressed nations and indigenous societies.

The leadership of a vanguard party is indispensable

Worldwide, the capitalist system is getting a “no confidence” vote by more and more people, especially as corrupt oligarchies and corporate conquistadors grow ever richer at the expense of the majority. Again and again, the oppressed rebel– from Egypt, Syria, and Tunisia to Greece, Spain and Venezuela, yet no strong, revolutionary leadership emerges to guide the rebellions toward the conquest of state power and revolutionary socialism. Instead one tyrant or ruling clique is simply exchanged for another. The capitalist class may change faces at the top, but remains in power and reasserts its will and interests.

For fundamental and meaningful change an international revolutionary party is necessary, a party like the one founded by V.I. Lenin and which he led with Leon Trotsky.

It takes a Leninist party, a party of professional, dedicated revolutionaries with experience in the class struggle to “patiently explain” that real change demands a complete transformation of the state power, to recognize when it is possible and necessary to launch a revolutionary offensive, and to direct the workers’ efforts to success. The Russian Revolution was only able to move from the February overthrow of the czar to creating a state of and for the working class eight months later because of the Bolshevik Party of Lenin.  As Trotsky concluded in his analysis of the “Lessons of October,” “Events have proved that without a party capable of directing the proletarian revolution, the revolution itself is rendered impossible. The proletariat cannot seize power by a spontaneous uprising. . . . there is nothing else that can serve the proletariat as a substitute for its own party.”

The galvanizing role of women, the most oppressed

Today women are entering the workforce at an ever increasing pace: half a billion in the last 30 years, so that now four in 10 workers globally are women. This fact is a boost to humanity’s revolutionary prospects.

The events of 1917 highlight the indispensable role of women. It was the radical women workers of Petrograd, those who were the lowest paid, and who dealt with the burden of feeding their families in a time of scarcity and war, who had the true pulse of the working people and their readiness for rebellion. On International Women’s Day, Bolshevik women walked out of their factories, taking their demands for “Peace, bread and land” to the streets, pressing the workingmen and soldiers to join them and boldly confronting the czarist forces. Five days later, the Romanov dynasty of Nicholas II was defeated.

During the ensuing months leading to the October victory and afterwards, women continued to be a driving force propelling the Revolution forward. As a result, the Soviet laws passed protecting women’s rights were the most progressive on earth.

Internationalism is vital for lasting victory

The Russian Revolution achieved enormous gains for working people, for the peasantry, and for women, and some of these advances survived until the Soviet collapse in 1991. But the full potential for freeing its people was brutally stunted.  The devastation to Russia’s resources during World War I; the 3-year civil war abetted by the invasion of more than a dozen foreign capitalist nations with the deaths of many of the Bolshevik leaders; massive famine and starvation—all these forces combined to create the basis for the rise of the Stalinist bureaucracy—a police force to administer scarcity and lie about the reasons why.

But more than any other factor, the Revolution was crippled by the failure of revolution in other, more developed countries which could have helped the Soviets to overcome crippling underdevelopment. In this isolation arose the cruel deformity of Stalinism. It turned the shining workers state into a force for collaboration with the imperialist powers and betrayed revolutions made by working people of other lands while robbing its own people of democratic self-rule, the cornerstone of socialism.  The fate of the Soviet Union proved conclusively that the rule of the working class and creation of a just and democratic social system can only be realized on a world scale.

The Committee for Revolutionary International Regroupment takes these seminal lessons from the Russian Revolution to heart and embeds them in our program. We are committed to building an international alliance of revolutionary, socialist parties that embrace the needs, experience and leadership of the most oppressed and is committed to the final, worldwide replacement of the vicious, exploitative capitalist system with socialism. We invite other revolutionary organizations to join us. Two decades into the 21st century, with an imminent threat to the survival of the earth itself, there is no time to lose.

The Committee for International Revolutionary Regroupment (CRIR) is an effort by organizations including the Freedom Socialist Party and the Partido Obrero Socialista of Mexico to bring together Trotskyists of different countries to work jointly toward the foundation of a new socialist international.

2 thoughts on “A Hundred Years Later, Lessons From the Russian Revolution”