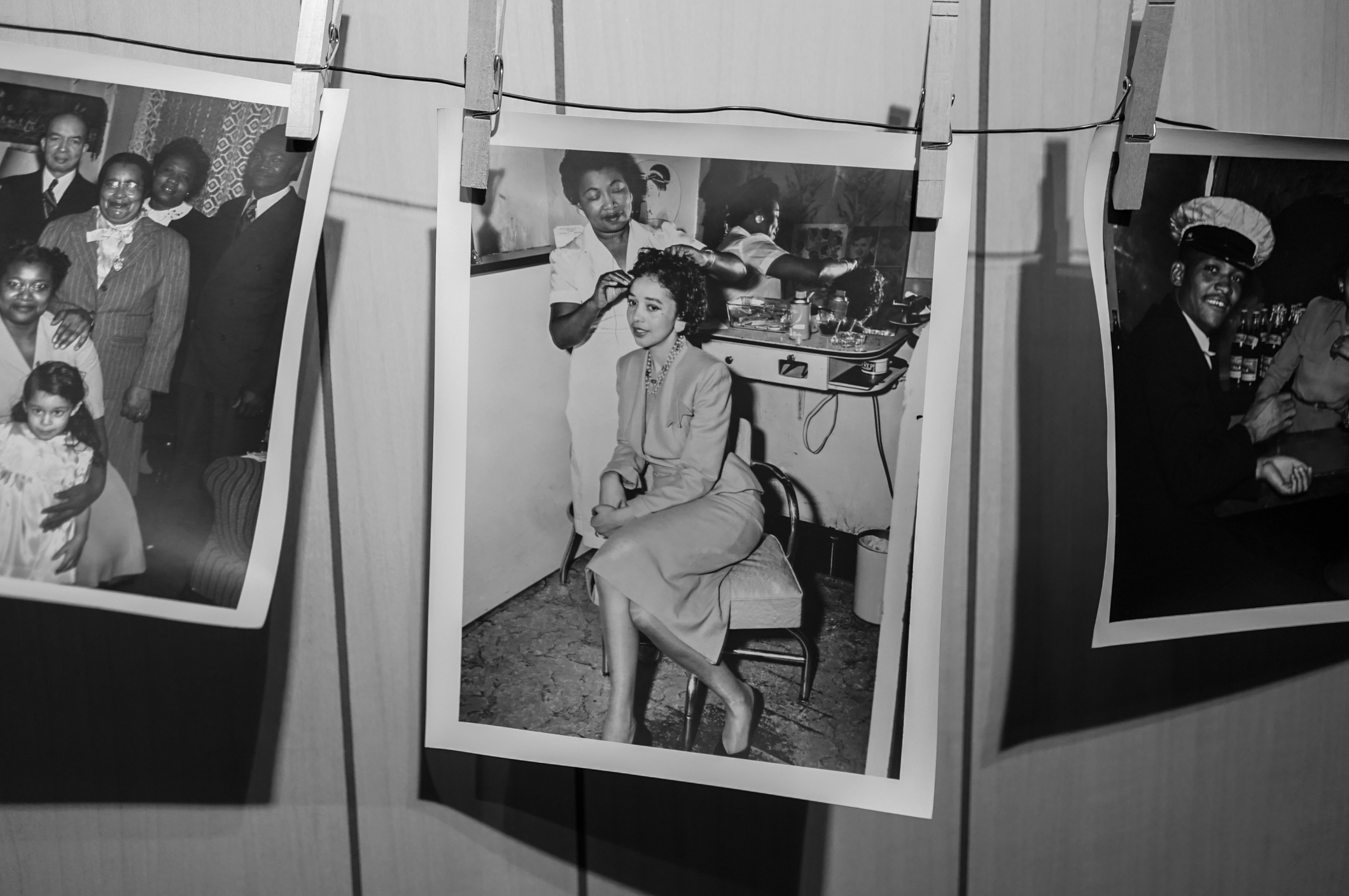 On November 18 an exhibit of the extraordinary work of Seattle Photographer Al Smith opened at the Museum of History and Industry (MOHAI). The show called Seattle on the Spot: The photographs of Al Smith features pictures of Seattle’s Central District.

Smith documented Seattle’s vibrant African American community from the late 1930s through 2005. He brought his camera everywhere, taking pictures of his family and friends, social gatherings and community events.

Smith also spent time photographing Seattle’s dynamic, yet segregated jazz scene. Jackson Street was once a jazz Mecca with 34 nightclubs lining the street.  Al spent many nights photographing the customers and the performers, capturing amazing images with a 4×5 speed graphic, a large format camera and flash that make the images even more remarkable because of the camera’s size and the fact that Mr. Smith only had two shots per film holder.

The exhibit is directed by MOHAI’s Curator of Photography Howard Giske, a long-time friend of Smith. The two first met when Smith volunteered to work in the darkroom at the old MOHAI location near the Montlake Bridge in1986. Giske soon learned Smith had an amazing collection of historical images of Seattle’s black community.

“We discovered a month or three later after he started working here that he was also a photographer,” Giske said. “He brought in some of his photographs he had taken early in the history of Seattle – 1930s, 40s and later and he knocked us out. His pictures were just wonderful. We immediately gave him a small exhibit just outside the library and darkroom where he was working and followed that up a few years later with a bigger show.”

In 1993 MOHAI, still based in Montlake, mounted a more extensive exhibit of Smith’s jazz images titled Jazz on the Spot: Photographs. The exhibit featured photographs of nationally renowned musicians and performers like Duke Ellington, Louis Armstrong, Tommy Dorsey and prominent local performers like Oscar Holden, the Leon Vaughn Band and Quincy Jones. Some of those same images appear in the current show.

Seattle writer and author Paul de Barros, worked on the Jazz on the Spot exhibit in 1993 and also contributed to the current exhibit as an advisor for material related to Seattle’s Jazz scene. The writer said one of his favorite images in the exhibit is a photograph of the Leon Vaughn Band at the Basin Street Night Club in 1948.

“I love this photograph. I actually have a print of it in my home because I bought it from Al years ago. It’s a photograph, to me that really epitomizes Al’s eye for the moment and for composition.” de Barros described how the viewer’s eyes are drawn to the singer, and then to the saxophonist and then to the piano player, all of whom are laughing. The viewer’s eyes scan the image almost hearing the music and laughter.

de Barros said Smith knew exactly what he was doing when he photographed Seattle’s Night Clubs. “I think his (Al Smith’s) eye was perfect for music because it had rhythm and he presents a composition that makes you hear the music.”

The present exhibit is a collaborative effort with numerous volunteers and organizations contributing time and money to what Giske described as “an amazing and fairly complete retrospective of [Smith’s] life’s work. There are at least 40,000 pictures we had to choose from, it was impossible to narrow that down. You’ll get a chance to see an exhibit that very few people have seen, we’re really proud of it and I know if Al was still here he would also be proud.”

One of the organizations that helped go through the images was the Black Heritage Society of Washington. Stephanie Johnson-Toliver, a member of the BHS’s Board of Directors remembers uncovering an image that brought back childhood memories. “One of the photos that touched me is of Ms. Cloteal, a popular Central Area beautician who used to curl my hair for the holidays when I was a very young girl. Her shop is where DeCharlene had a start…my mom would make hair appointments for herself with DeCharlene to meet at her house because she didn’t want to hurt Ms. Cloteal’s feelings.”  DeCharlene Williams is the former President of the Central Area Chamber of Commerce and a local business owner.

The curators of the show hope visitors to the exhibit might see someone in the photographs they recognize to help the museum identify people in the images. During the creation of the exhibit, MOHAI would bring photographs to the ROOTS Picnic, an annual summer picnic begun in the 70s to bring together some of the earliest Seattle black families for an annual reunion. The meeting of Relatives of Old Timers of Seattle, or ROOTS for short, was an opportunity for the Museum to meet people who knew Smith and might know some of the people in the photographs. Smith was a frequent attendee at the picnic, which he photographed of course.

Al “Butch” Smith Jr., one of the curators of the show remembers working with his father in the darkroom. “From when I was 8 years old until I was 12, I was in charge of moving prints as they would come out from tray to tray.”  It was a bonding experience for Butch Smith and his father. The exhibit includes a replica of the basement darkroom Smith Jr. remembers from his childhood, including the window covered with plywood he likes to call Butch’s window. The exhibit also includes photographs of  Al Jr’s , his mother and sister and a 4×5 camera like the one Al Sr. used to photograph the jazz clubs. Quin’Nita Cobbins, a historian and webmaster for BlackPast.org, served as an advisor on the history of the Central District including the history of the African American community there for the Seattle on the Spot exhibit. Cobbins described how one of her favorite images in the exhibit of a baby’s birthday party. For Cobbins, this image shows how Smith was able to record moments of everyday life in the community despite the adversity of discrimination. Giske said Seattle on the Spot: The Photographs of Al Smith is “about him, it’s about Seattle, the city where he was born, the city he loved and his neighborhood, the Central District.”

The exhibit will be open through June 17, 2018. There will be additional programming in relation to it with the Curators on December 5 at MOHAI and Portrait of the City: The 25 Most Important Photographs from Seattle History at Hotel Theodore on December 12.