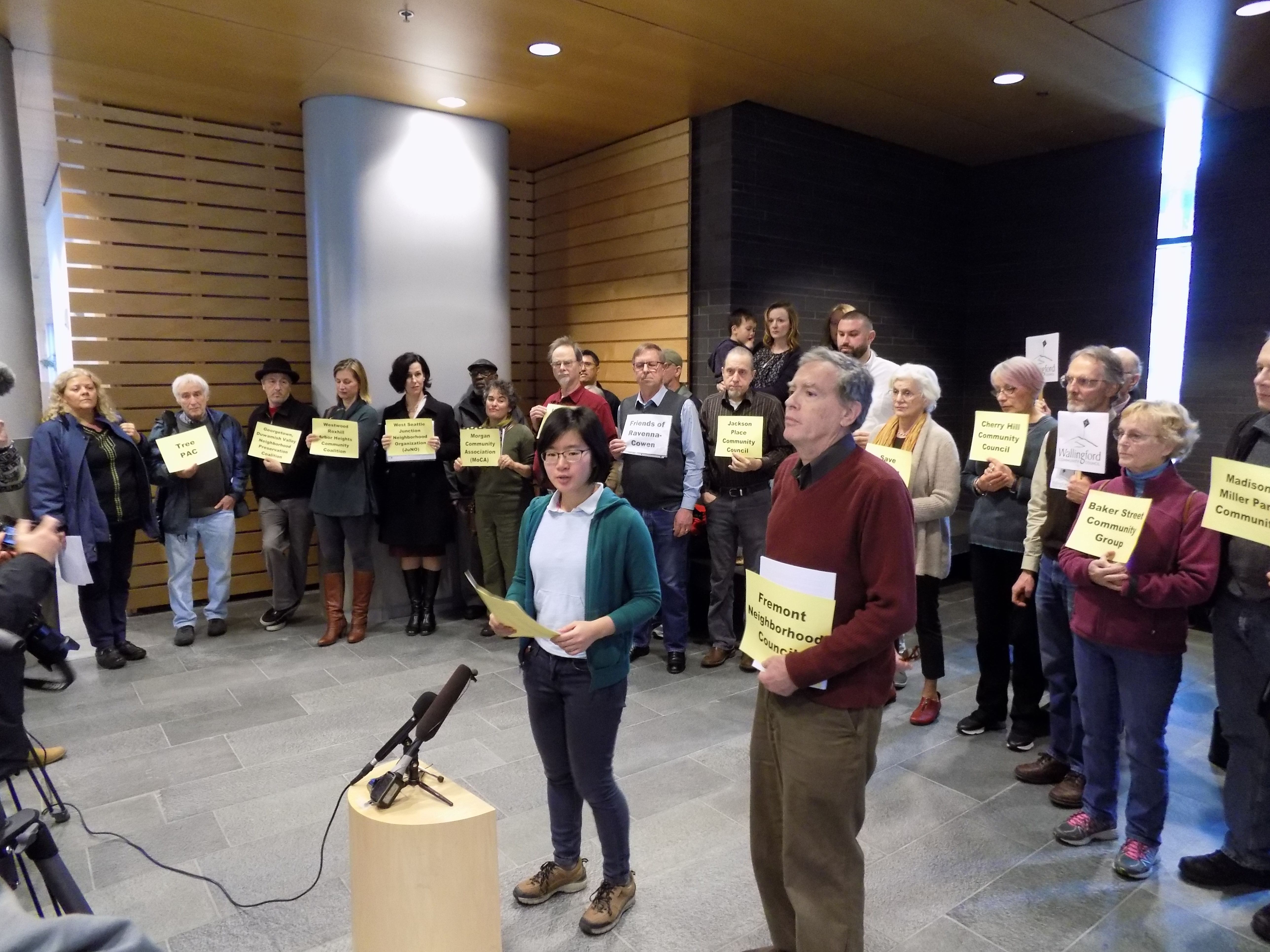 Representatives of 26 neighborhood groups met at Seattle City Hall on Monday to oppose Mandatory Housing Affordability (MHA) legislation. Introduced by former Mayor Ed Murray, MHA would institute zoning changes and require developers constructing new homes to either set aside affordable units or pay into a city fund for the creation of additional affordable housing. If passed, MHA would allow new buildings to be built higher and would increase the density in many urban areas.

The new organization, dubbed the Seattle Coalition for Affordability, Livability and Equity, gathered outside the Bertha Knight Landes Room. In subsequent days, they plan to take further legal action to resist the proposed ordinance.

In his opening statement, Toby Thaler, the Board President of the Fremont Neighborhood Council, discussed the housing boom since the Great Recession in Seattle. “Housing is even more unaffordable, the homeless population rises with the rent, transit and traffic are dismal,” Thaler said.“Unfortunately, the city government under Mayor Ed Murray decided to impose a top-down solution to these problems rather than working with communities.”

Opponents of MHA have expressed concern that developers in possession of highly desirable areas will simply pay the fee rather than construct affordable homes in new buildings. Other activists fear dramatic neighborhood alteration as part of the zoning changes. Much criticism is leveled at the location of upzones, which avoid many affluent, single-family housing areas across the city.

Thaler promised to take legal action to shop the upzones by appealing the changes to the city hearing examiner. “We are asking the hearing examiner to require the city to honestly evaluate the problems that city-wide upzoning is expected to solve,” he said.

Cacima Lee, a UW student and Beacon Hill Council member, read a statement from the Beacon Hill Council, arguing the neighborhood should have a “balanced mix of market-rate, affordable and low-income housing” in order to ensure racial and economic diversity.

What constitutes ‘balance’ is up for debate, namely the addendum in MHA that allows developers to pay out of creating affordable housing, something critics may create a backlog on the construction of affordable homes.

The coalition faced questions from the audience about where additional income sources for affordable housing would come from if MHA is scuttled. Sarajane Siegfriedt with Seattle Fair Growth said the group has been advocating to use funds raised by the business tax the city council proposed in Resolution 31782 in the creation of affordable housing. Thaler also advocated starting over on the MHA legislation with higher fees for developers who choose to opt out of providing affordable housing.

Members of the coalition had other ideas to tackle Seattle’s affordable housing crisis. A U District Small Business Association member advocated for small business impact studies wherever upzones are implemented.

Member organizations even include TreePAC, an advocacy group focusing on keeping trees present in the city in the midst of large-scale development.

MHA legislation will likely face a council vote in the summer of 2018 after the council forms a committee to discuss the new rules and Seattleites have additional chances to weigh in at public hearings.

Will Sweger is a Beacon Hill resident and contributor at the South Seattle Emerald. His work has appeared in Seattle Weekly, Curbed Seattle and Borgen Magazine. Find him on Twitter @willsweger