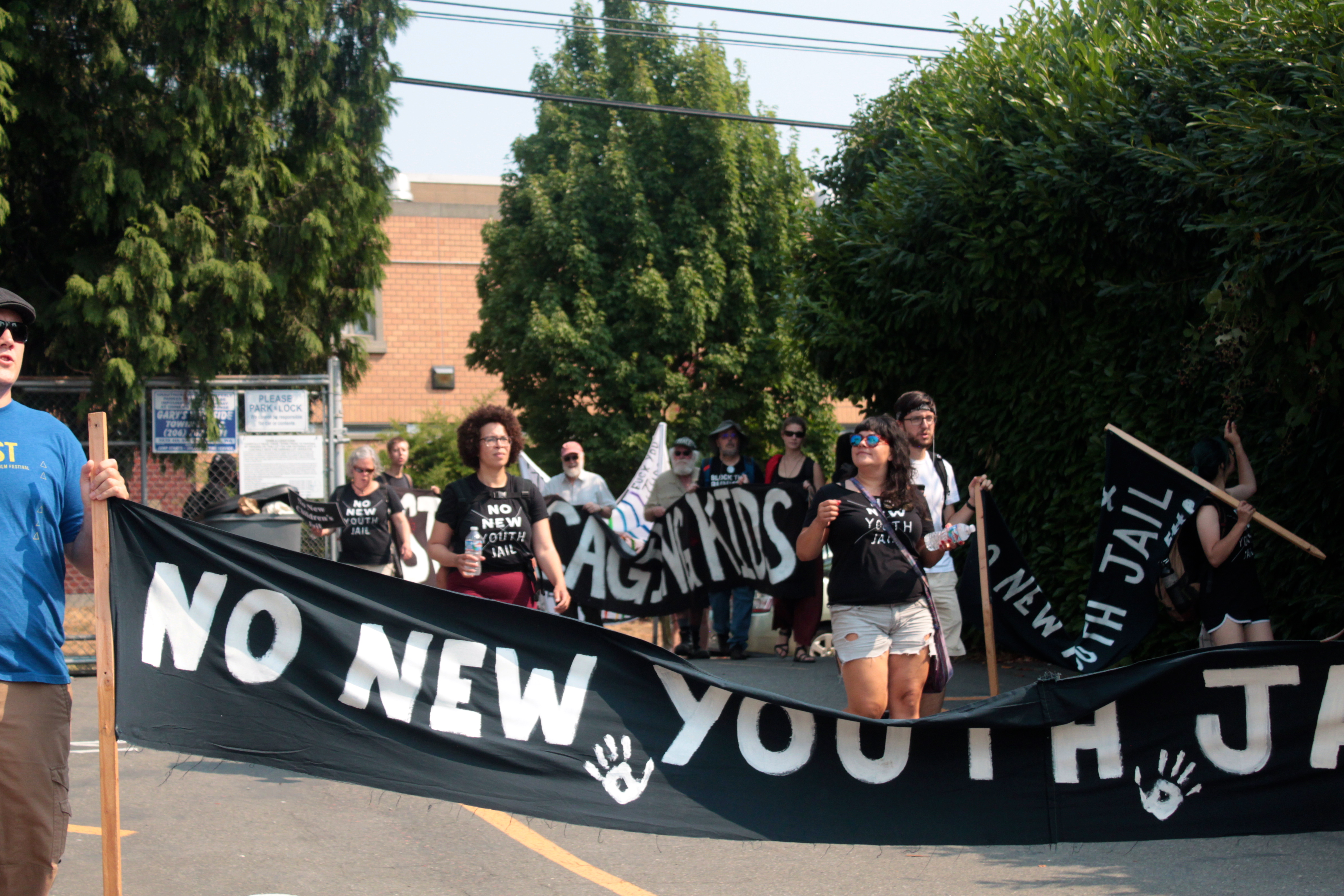 (published in partnership with the Seattle Weekly)

Last week the King County Council flirted with history when it proposed that the Public Health Department oversee the county’s handling of juvenile detention. If it follows through, the county would be the first in the nation to make such a move. At a time when resistance to youth incarceration has become de rigeur, the county received plaudits from many corners. Naturally, among those reveling in the moment were activists with NoNewYouthJail.

For the last five years, the coalition—made up of local social justice groups Ending the Prison Industrial Complex, 206 Agitators, Youth Undoing Institutional Racism, and the Committee on Oppression and Racism in Education, amongst others—has advocated for this exact change. NNYJ has captained the opposition to the building of King County’s Family Justice Center since 2012, back when putting kids in jail was not the hot topic it is today.

Yet, in the praise that followed the decision—including from Seattle Police Chief Kathleen O’Toole, who called the move a “bold step”—the activist group has barely been mentioned. Sadly, it’s not all that surprising.

In Seattle we love our civic innovations—be prepared to dodge cartwheels in the street at the slightest whiff of a progressive policy that brandishes our liberal credentials. But when it comes to recognizing activism’s co-authorship of good governance, our enthusiasm wanes to the level of a shanny belly flop.

When asked what role the sustained protests against the construction of the King County Family Justice Center, King County Executive Spokesperson Alex Fryer said in an email that protesters played, “No role.”

Instead, Fryer cited the leadership of King County Deputy Executive Rhonda Berry, who took over juvenile justice issues last August, along with a study commissioned by the county. That study, undertaken by Dr. Eric Trupin and released in September, suggested reforms to the county’s Juvenile Justice Practices, including the most recent move.

Yet, long before the county directed these moves, activists were at full throttle against the detention center, which they view as an abomination.

The claim that no one was listening for the last five years—through protests at Seattle City Hall, demonstrations at County Council meetings, letter-writing campaigns, lawsuits, speech disruptions, teach-ins, and even a public display outside the home of county executive Dow Constantine—stretches all credulity.

I myself covered a teach-in at Seattle University’s Campion Ballroom hosted by EPIC and the NNYJ nearly three years ago. There the group work-shopped alternatives to youth detention, explicitly discussing the application of a public health framework to juvenile incarceration. Most NNYJ members have sounded off on that very topic anytime a microphone was in reach.

Now some in the movement are demanding recognition.

“I think the county giving us credit would give over a lot of power to community,” said public health professional and NNYJ organizer, Julianna Alson. “It’s paternalism that’s deeply ingrained as if they’ve discovered this approach on their own. My question is, if they’re non-responsive to community pressure than who is the county accountable too?”

“Part of systemic racism is white people and people in power having to be the ones to come up with ideas, instead of giving credit to the organizers who have been calling for this for years,” she says.

And that’s ultimately the problem with a narrative relying on a benevolent government body acting in isolation from the demands of those it governs. It buttresses the pervasive belief that a citizen’s obligation begins and ends at the voting booth.

That belief is troublesome because it ultimately cast our electeds in the role of all-knowing leaders, with the average citizen serving as detached enabler and never co-conspirator with the powers that be.

The reluctance to recognize the role that activists played is natural, I guess. Politicians are human, after all, and no one wishes to be called out, publicly chastened, and have their intentions brutally deconstructed. To acknowledge the effectiveness of those who do so might well invite a fresh round of calling out, chastening, and continued activism.

Alas, that’s the cost of doing business when you work for the people.

Beyond specific policy achievements, activists should also be applauded for pushing politicians into what would otherwise be risky terrain. Our elected leaders are risk-averse by nature, running every potential move through an algorithm required to compute its impact on their electoral odds. This means that rarely does genuine civic innovation arise without the tense alchemy of social activism and grudging policy endorsement.

By all means, the county government should be commended for its work on juvenile justice. It has halted the practices of prosecuting youth for aged-based offenses like truancy and been one of the first (if not only) bodies in the country to simultaneously reduce its juvenile population of incarcerated juveniles while also decreasing racial disproportionality. They’ve also expressed an aspiration of zero youth detention, designed the new detention facility so cells can be reconfigured to an activity space and implemented restorative justice practices such as peace circles as a method of conflict resolution between youth—yet, we also must recognize that exactly zero of these measures were enacted before the community applied pressure for a more humane approach.

As with this newest announcement, the common cause of the council and the activists could very well be the result of a coincidence. More plausibly, it appears that county leaders are listening. They should acknowledge as much.

Marcus Harrison Green is the editor-in-chief and co-founder of the South Seattle Emerald. He regularly writes about South Seattle personalities, social movements, juvenile justice and American society. He is also a columnist for the Seattle Weekly, a former scholar-in-residence at Town Hall Seattle, a past Reporting Fellow with YES! Magazine, and a recipient of Crosscut’s Courage Award for Culture. He currently resides in the Rainier Beach neighborhood and can be followed on Twitter @mhgreen3000